Now reading: A green escape in the middle of the city – the Oude Molen Eco Village

When one thinks ‘eco village’ one imagines fields of hand planted vegetables, cob houses and hippy types endeavouring to carve a life outside of the run-of-the-mill – an alternative lifestyle sought by more and more people as they become disenchanted with modern living and all it stands for.

One certainly doesn’t expect to find a very active eco village right on the border of Valkenberg, close to the suburbs of Pinelands. But that is exactly where Oude Molen Eco village lies. 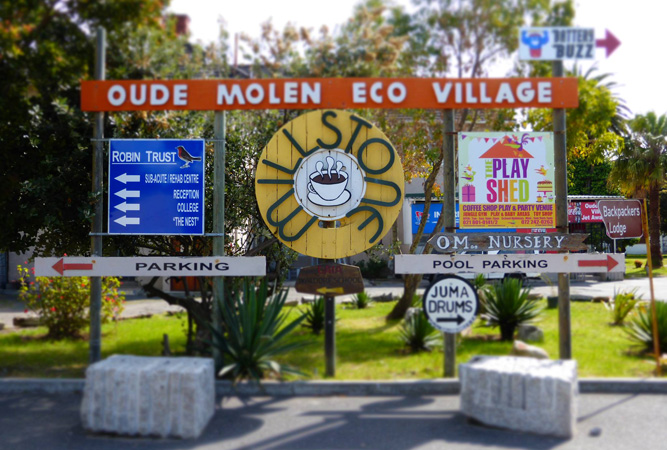 Right in the midst of the traffic of the intersection of the N2 and the M5 is an open section of grassland, just on the other side of the Black River. Friends of mine often frequent the Millstone Farm Stall and Café here, as it is a great child-friendly venue, and I had been meaning to visit for what must be a couple of years, before I finally headed out there this weekend.

Oude Molen is something of an oasis. It is described as a ‘micro-enterprise village’ where roughly 70 tenants across a range of businesses, such as artists, woodworkers, music studios, metal workshops, photographers, and a training centre have come together to create, not only a life for themselves, but also employment for about 300 people.

The village very much sees itself as a link between the affluent southern suburbs and the Cape Flats.

Not only that, but they’re an example of how one can make use of ‘under-utlised’ public assets. They’re renting a series of rather rundown public buildings, some of them of historic value such as the one used for the lovely little Millstone Café.

The place is an odd yet beautiful mix of rather dejected looking buildings – it’s been both a military barracks and a mental asylum before now – and bold, abundant gardens overflowing with flowers, plants and grassy verges. There is much going on here, particularly on a Saturday morning. 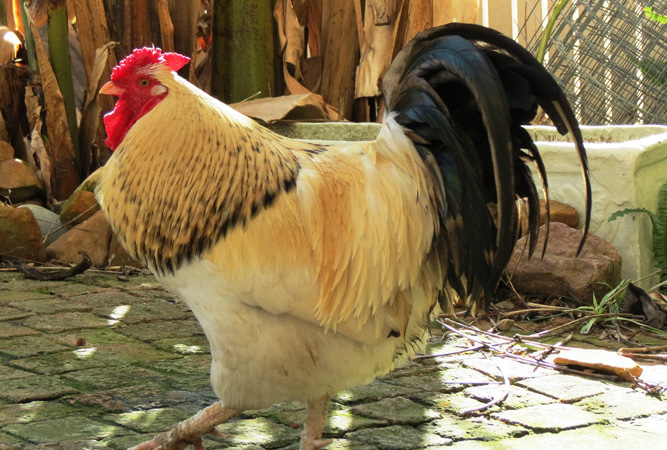 Right next to the Millstone Café are paddocks and stables filled with happy looking horses of all shapes and sizes, and children sitting in a circle under a tree, when we arrived, were preparing in some way for their morning ride. People were milling about, saddles were being carried from place to place, and lively dogs and children were running around. It’s obviously a safe place to be.

As we entered the village, we drove past the Gaia Waldorf School, a kindergarten and primary school to Grade 7 in the initial curve of the road. The school has been here since 1988 and is part of the original farmhouse complex, built in the late 1700s. Being part of the village means the children all have access to horse riding, organic farming, interaction with the village and its eco initiatives and the rural setting of the village – what an advantage for these children!

A little further along the road that passes through Oude Molen Village, was the swimming pool, on this particular morning the site of much merriment, splashing and music as summer appeared to be the reason to celebrate. But before we reached the swimming pool, we lingered around the village’s organic vegetable gardens and bee hives.

Just about every turn produces a garden. Some of the produce is apparently sold at Millstone and used to create its menu items, whilst the rest is loaded up on a cart and horse and sold around the neighbourhood.

One of the gardens is obviously a community project, with signs to tell the tale, aimed at young people who can learn to grow food, and find a space in which they belong. But we weren’t able to chat to anyone about the gardens – reason for yet another visit! 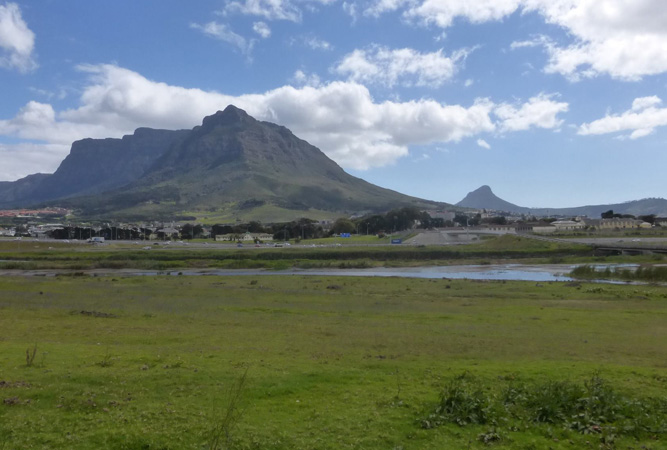 The village is unfortunately under threat from an inevitable mass housing project due for this incredibly beautiful and bountiful piece of heaven right next to the highway (despite its situation there is very little traffic noise).

The threat is not immediate, as various factions are apparently busy arguing over just whose land it is, but it will be a huge pity to lose an obviously thriving project that serves the community and is a living example of how effective eco village’s can be!

So, whilst it is still there, head out to the Millstone ecofriendly farm stall and café for your share of homemade timeout. Enjoy a lazy breakfast or lunchtime with freshly squeezed juices, wholesome meals and snacks that use organic produce from gardens right next to the restaurant, home-baked bread and a place for your children to play in a garden that includes a huge treehouse.

The café is on the site of Cape Town’s first windmill, beside the Black River. You can also buy organic vegetables and a range of preserves and jams at the café’s shop.

It’s easy to find, simply head out to Vincent Pallotti hospital (Alexandra Road off Raapenberg Road) and the main entrance lies just beyond it, on the left.