Now reading: Platbos – where the trees whisper messages of solace

Platbos is an incredible, ancient indigenous forest that just about no-one knows about. It lies off the coast of Gansbaai, on the same dirt road that takes one past Grootbos Private Nature Reserve, and a wonderful retreat called Bodhi Khaya (I know because I’ve been there).

Melissa had already telephoned us as we approach Platbos – they are in a bit of a rush to be somewhere and our time with them will be limited. Putting foot as much as one can on a dirt road in a not-offroad vehicle, we turn in at the little wooden sign, careful to take the left turn at the fork and not end up in the driveway of their neighbour (obviously a regular enough occurrence for there to be a note in the directions).

My first impression is one of bush. Where forest should be, to my mind, is a lot of what seems to be fynbos. ‘Are you sure this is a forest of, well, trees?’ I ask my other half, wondering if I’ve misunderstood the description of trees over 1000 years old – maybe this is a fynbos forest, without the yellowwoods I’ve come to anticipate from other coastal Afromontane forests. 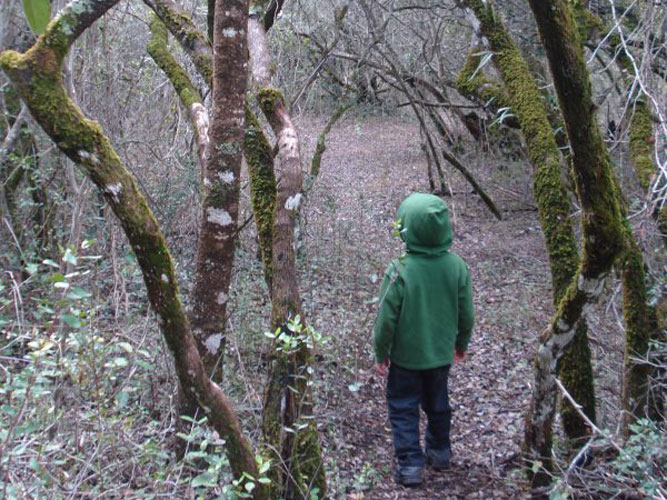 But as we round the corner, I catch my breath. For indeed the canopies of trees are now visible and the forest is indeed a Forest. As we tumble out of the car, a big, burly Francois comes out to greet us. It isn’t difficult to imagine that he prunes ‘large and dangerous’ trees for a living, and occasionally fells them too. He’s been involved in arboriculture since he worked in Germany, travelling later to London where he specialised in ‘tree surgery’ – as opposed to the hacking of trees that appears to be the standard for pavement trees where I live.

Francois greets us and within minutes we’re taking in so many facts that I’m regretting leaving my notebook in the car. ‘Platbos’, as its name suggests, is the Afrikaans word for ‘flat forest or bush’, which describes my experience exactly – the forest when approached by the valley road looks exactly like – more fynbos! I laugh at the analogy.

And that’s the crux of Platbos, really. One doesn’t expect to find it here on the slopes of the Baviaanspoort Hills. One expects to find forest in kloofs or coastal thickets, not on a gentle slope where little to no water falls – half of the rain that Newlands in Cape Town receives, on a good year.

Platbos is what remains of the Swartkransberg Forests, or at least the largest remaining fragment thereof – the Kriges own 27 of the 40 hectares, with plans to acquire more.

Swartkransberg Forests are lowland forest, and part of the fynbos biome, and as we begin walking through the paths of the forest off to our left (Melissa and a frighteningly silent black Chinese chow, that I mistake for a husky, have now joined us) we learn some of what makes this forest so unique, and the reason that Francois and Melissa bought it when they could ill afford to do so, simply because of their need to protect it.

Despite evidence of Afromontane qualities to Platbos, there are no yellowwoods, black stinkwoods, rooiels and other of the thirstier species. This forest has been likened to the Tongaland-Pondoland forests of KwaZulu Natal, and has also been called a ‘sand forest’. Instead there is a predominance of white stinkwood, wild olive and white pear trees, which give it a character all its own, and in the world of botany, defies logic. 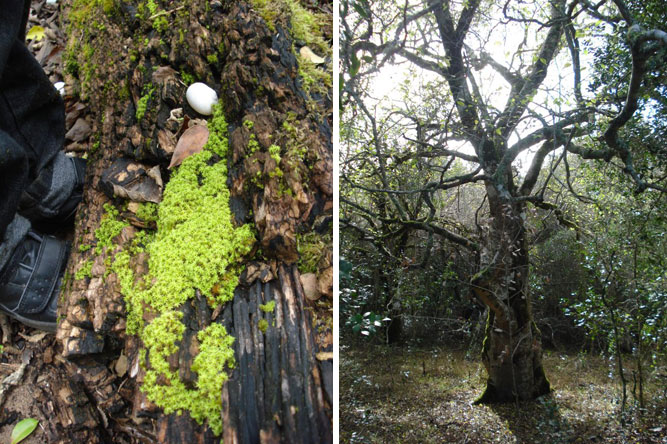 Francois points out how the trees here tend to clump together, in the sense that in the overhead canopy their branches overlap, something you won’t find in other forests where each tree has enough space to reach the sky. This is one way in which it manages to ‘trap’ any moisture, in the collected hollows of the base of the trees. That and the mist and fog that often hang over the forest on early summer mornings.

In the centre, or thereabouts, is a 1000-year old milkwood, it’s branches dominated by mosses and epiphytes, which are protected by pleas to please not climb any of the trees whilst doing the walks through the forest (you can pick up a map for these from the little entrance hut).

But I haven’t yet begun to describe the feeling of the space that is Platbos. The forest is a sacred space. There is a presence in amongst these trees, and when we stumble across the labyrinth of mother of pearl shells, unfortunately tampered with yet again by the resident baboons who appear to relish re-organising the design, I realise what a perfect sense of balance there is to a forest.

I am later not surprised to learn that Melissa, despite her scientific horticultural training (she is the creator of the Platbos nursery), has harnassed the healing power of these trees by producing a vibrational medicine in the form of African Tree Essences. Hers is a journey that began with what she believes was a call by the forest to work on a deeper level with the trees. 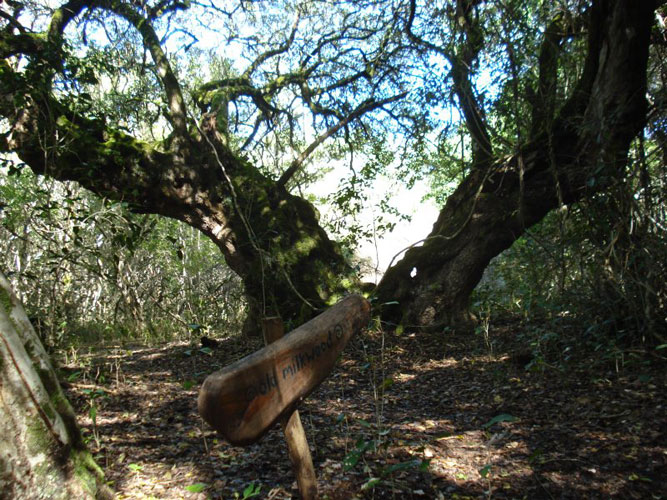 Melissa has learned that old growth forests have incredibly strong and stable energy fields, and that trees integrate what is above with what is below, transforming the element of sun, earth, water and air into life-sustaining matter. She has produced 13 trees essences based on the number of trees found at Platbos. The essences have been tested and found to have a profound effect on helping to unlock ancient wounds, even past lifetime issues.

Melissa, Francois and their two children, live at Platbos, offgrid. As far as possible they live in harmony with their forest home and the planet. They see themselves as guardians of the forest, yet both have their feet ‘flat on the ground’, so to speak, and their Trees for Tomorrow Reforestation Project is an ambitious attempt to restore the forest, stop the ever encroaching alien thickets, create firebreaks so that the heart of the forest is always protected, and conserve the biodiversity of this unique forest.

Visit Platbos and take a walk through the forest or contribute to the forest by sponsoring a tree!