One of the most endangered mammals on Earth, the riverine rabbit is found only in the Karoo…

There are thought to be less than 250 of these rare creatures left. And few people can claim the privilege of having seen one. Found mostly in dry riverbeds in the arid, central Karoo in an area that has been almost completely converted to agriculture, the riverine rabbit is under pressure to survive.

None of its traditional habitat has, up until now, been protected within a national or provincial nature reserve. The rabbits are found only on private farmland, private reserves or in isolated pockets of no more than 50 rabbits in a number of areas in the Western Cape… 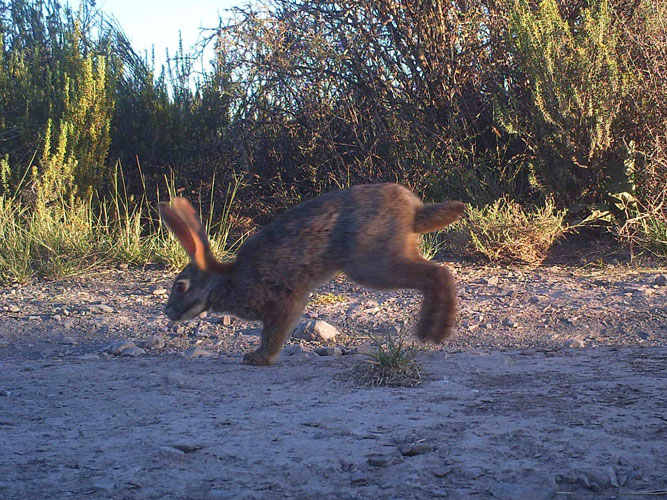 South Africa’s riverine rabbit is, for all intents and purposes, a brown bunny rabbit. Its distinguishing features are the dark brown stripe that runs along the lower jaw, the white ring around its eyes, and the downy pads on its broader than usual hind feet.

Other than that, it has long ears, dark brown upper body and light brown underparts, and no white fur to speak of.

It also has its fair share of nicknames: pondhaas, Bushman’s hare, doekvoetjie (because of the downy pads), boshaas, Deelfontein hare and vlei haas.

Most concerning is that riverine rabbits do not breed like rabbits. Quite the contrary, in fact. Whilst most rabbit species raise up to 12 in a litter, riverine rabbits raise but one kit at a time. And they live for only about four years in the wild.

It also depends on the thick vegetation and soft soil found along seasonal river banks for its food and for stable burrows – riverine rabbits are the only African rabbits to produce nests for their young.

The combination of grazing and crops has eroded much of the rich topsoil of the Karoo. But the Endangered Wildlife Trust has introduced a programme to raise awareness and encourage their presence on local farms.

The riverine rabbit is considered a ‘flagship’ species – in other words: any actions to its benefit will benefit other plants and animals as well. Its presence on a farm is also an indicator of riparian habitat health along the rivers. 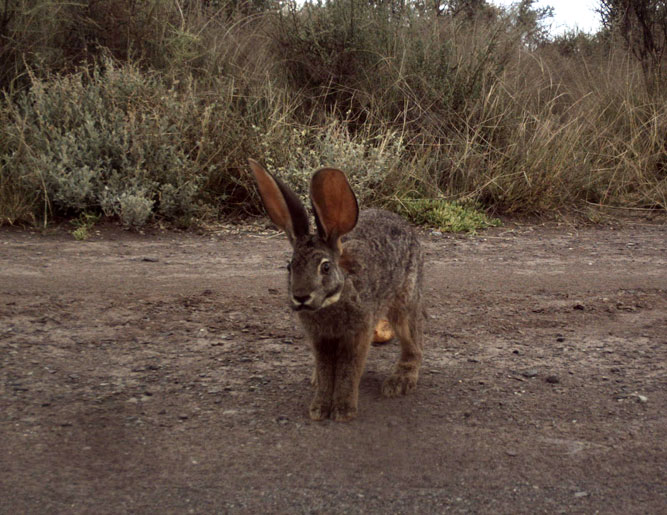 Where to catch a glimpse of a riverine rabbit?

The riverine rabbit only comes out at night when it browses on flowers, the leaves of shrubs, and grasses during the wet season.

A stay in a nature reserve, or a private farm, in the Karoo – particularly on one of those mentioned below – will allow you to find them.

Pockets of no more than 50 rabbits at a time have been identified close to the towns of Barrydale, Montagu, Touwsrivier, Klaarstroom and Prince Albert in the Western Cape, which has given the conservation programme hope that the rabbit possibly has greater numbers.

Stay at: Taaiboschfontein, in the Kromrivier riverine rabbit conservancy – where you can walk, or cycle, the bush and mountain trails.

Sanbona Wildlife Reserve, between Montagu and Barrydale in the Little Karoo, is 54 000 hectares of undulating muntain reserve just three hours from Cape Town that not only boasts San rock art, but the riverine rabbit as well. Discovered here in 2006, the farm now actively conserves the habitat of the rabbit. Sundowner evening drives are on the menu and perfect for spotting one.

Dunedin Farm (Riverine Rabbit Retreat), near Loxton that falls into the Sak Conservancy, has photographed a number of the rabbits after they set up a monitoring programme using rabbit camera traps.

In the face of the estimation that the riverine rabbit’s numbers are in steady decline, the discovery of a population in the Anysberg Nature Reserve near Laingsburg, is a rather exciting one. Up until this discovery, pockets of rabbits were thought to exist solely on privately owned farmland. Anysberg is just over 81 000 hectares of local veld.

The riverine rabbit was initially sighted in this privately owned nature reserve in 2003. It meant that the rabbit’s formerly rather limited range – bounded by Sutherland, Calvinia, Williston, Carnarvon, Victoria West and Beaufort West – could be wider than initially thought.

The Karoo National Park, near Beaufort West,  is home to the black rhino and the riverine rabbit, both endangered mammals. Night drives are the perfect time to see them.

The rare photographs of the Riverine Rabbit above were taken by Jeremy Bolton of BushCam Safaris. Whilst on a visit with members of the Endangered Wildlife Trust’s  Riverine Rabbit Programme, Jeremy set up  cameras to see what they could find. Says Jeremy… “The distinguishing line on the jaw, white ring around the eyes and and a lack of any white on the tail left no doubt that we had a Riverine Rabbit. And over the next few days we got more. Everyone was hugely excited. Not only that we’d obtained these rare images but also that many of them were obtained at dawn – indicating that these guys were also crepuscular“.

If you are interested in a BushCam Safari contact Jeremy. BushCam Safaris gives you more than just a safari. Your game drives have real purpose: to find the perfect spot, to set up the cameras as quickly and quietly as possible and then retreat to let the wildlife return. This is not just game viewing, not just bush walks, not just a photographic safari… Its everything rolled into one.