Don’t expect to see great signposts indicating the Rocherpan Nature Reserve, which lies on the little road that takes one through Dwarskersbos and on to either Elandsbaai or places like Aurora. You can drive past the Rocherpan in the blink of an eye. Only the sight of the water drew my attention enough to warrant a three-point turn and a loop back to see what the nature reserve had to offer. 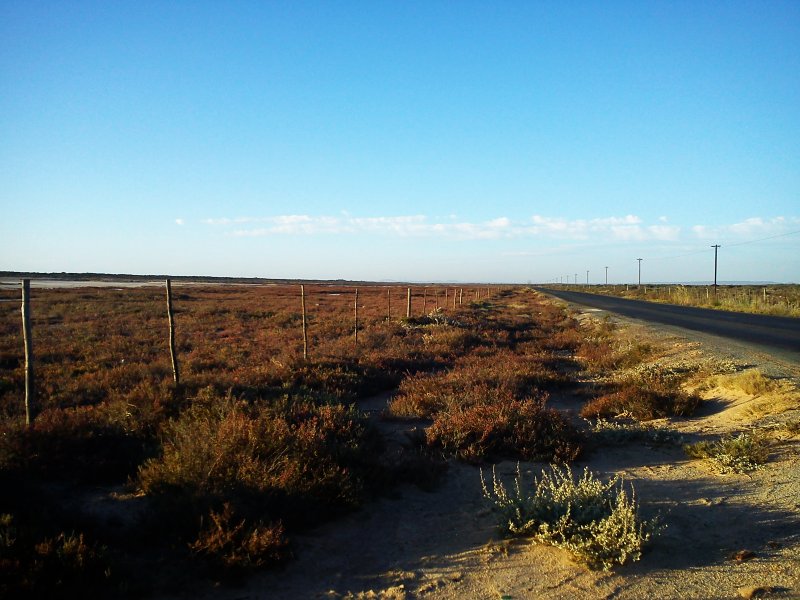 The gate stands closed as we arrive, but I can see that the chain is only loosely, folded over one half of the gate and that it swings in easily when pushed. There is no-one to meet us, no-one in a conservation-type outfit to sign us in and demand our entrance money that comes with a brochure about the reserve.

All that there is is a little hut to the left of the gate. Signs by Cape Nature indicate that we should nonetheless sign-in and contribute a certain amount for each car that arrives here – I wonder how many people actually do?

We have the 914 hectare reserve that stretches along the coastline north of Dwarskersbos and Velddrif to thank for the derth of lights at night when staying on this part of the Cape West coast. The star studded skies over our accommodation in Velddrif were such because of the lack of development that the reserve secures. 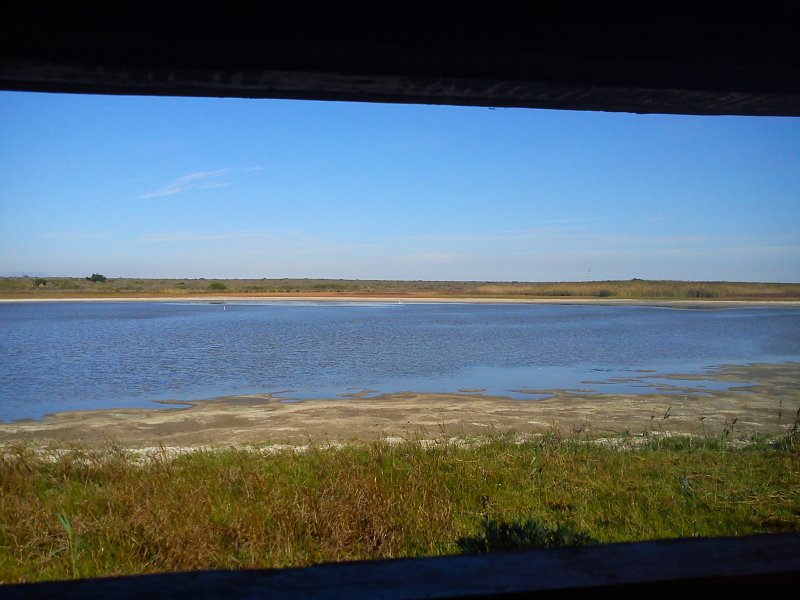 The vlei itself is an artificial one, we learn, that involved the closing off of the mouth of the Papkuils River by a man named Pierre Rocher (no guesses as to the origin of the nature reserve’s name, then).

The vlei is also seasonal, which explains why one half was completely dry on our visit in early April as the river only begins flowing in autumn where it rises in the Aurora Mountain 25 kilometres east of the reserve. We were lucky there was any water at all, as it usually dries up completely before the start of the rainy season.

The Rocherpan, we learn, is really important for the role it plays in conserving the habitat of water birds. 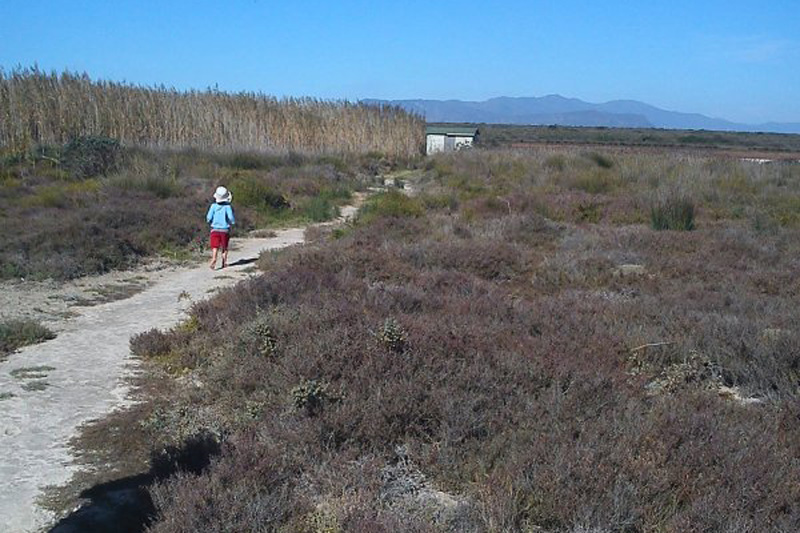 Many of the waders we see during our summer breed in Arctic areas like Siberia and Greenland during the summer of the northern hemisphere. If these birds were to lose their ‘winter’ (our summer) stop-over areas it would be tickets to them. Rocherpan’s vlei supports a host of flamingos, ducks and migrant waders – at least 70 types of waterbirds, and 183 species of bird in the reserve.

The reserve might appear insignificant, but its importance can’t be measured. Even more so, if you consider that there are only two reserves in which this strandveld is protected – the West Coast National Park and Rocherpan. 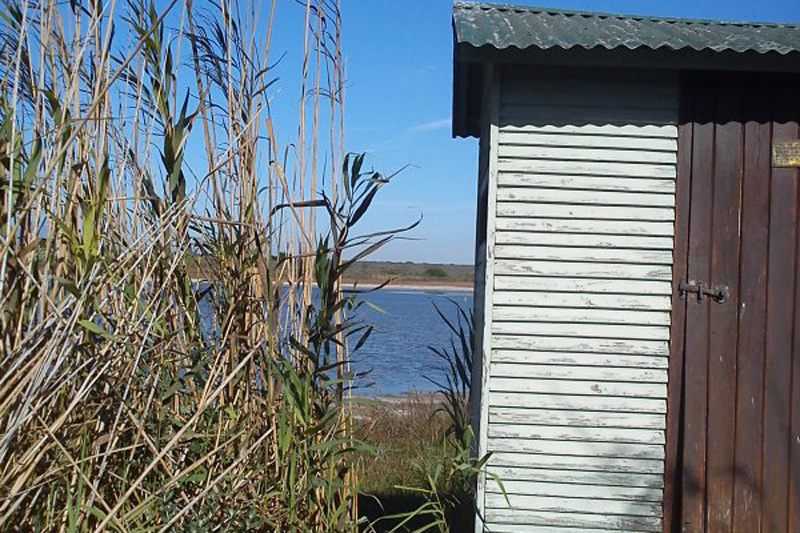 We leave our money in the little deposit box affixed to the wall and drive along the sandy road into the reserve, the dunes to our left. I am interested to learn that there is a difference between dunes and the sand found on beaches – I had always thought of sand dunes as little more than mounds of beach sand.

Dunes, however, usually have rooted plants that trap the sand. They protect the beaches and during high winds, they’re uprooted and deposited yet again on the beaches, but inland vegetation is protected. Dunes are also an ecosystem of their own and a number of burrowing animals live here, including dune moles and aardvarks.

We’re aware as we follow the road through the reserve that the vegetation here is different to that we’ve seen on the farms adjacent to the road that brought us here. There is a lot more life and variety here and we can smell the pungency of fynbos flowers throught the open window.

There are a couple of signposts to the two bird hides, but we miss the first and end up traipsing down to the second – a bit of a disappointment at this time of the year as there is no water, but we can guess at how beautiful it must be during autumn and winter. 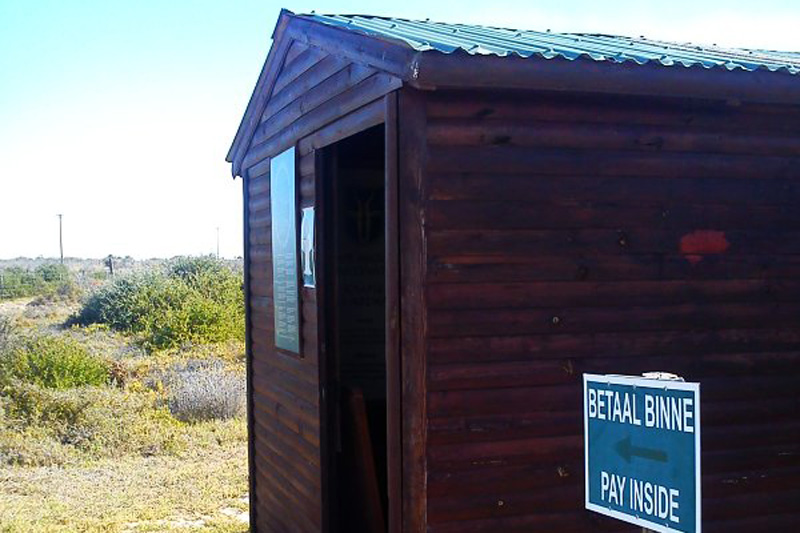 Back we head to the first bird hide, on the edge of the pan via a series of rushes and reeds through which I peer but fail to find a red bishop or a weaver – odd, would have expected to find them here. The little bird hide is tiny but once the wooden ledges that cover the windows are flung wide and pinned in place, offers, quite literally, a bird’s-eye view of the vlei.

We manage to spot a couple of lesser spotted species, pat ourselves on the back, drink in the views, and enjoy feeling the wind off the water on our faces, as it’s hot.

The Rocherpan reserve is open every day from 8am to 5pm (May to August) and then from 7am until 6pm (September to April). The reserve advertises picnic and braai areas, but we didn’t see these, although it would be easy to find spots in which to sit and enjoy a meal. You can also walk to the beach from the reserve and enjoy sand and waves frequented by virtually no-one.