Both the residents of Smitswinkelbaai (Smitswinkel Bay) and I are thanking our respective stars for the derth of development that means there is still no tarred road to bring all and sundry in their cars down to the beach at Smitswinkel Bay (which for some unknown reason, I kept calling Witsminkelbaai for most of the day until my other half and son finally dug me in the ribs in desperation and declared loudly that ‘for goodness sake, couldn’t I say it properly?’). 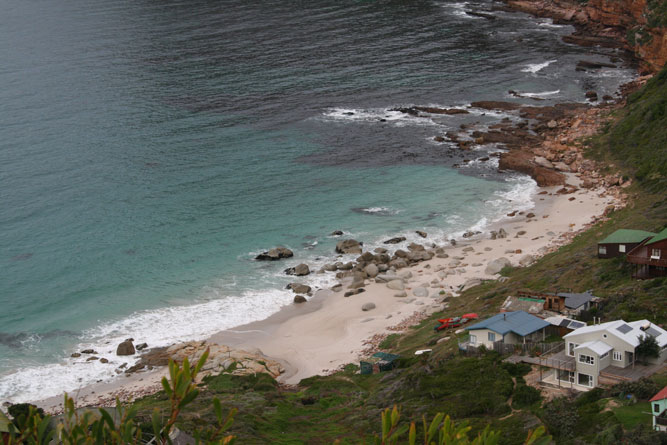 Pronunciation aside, the gorgeously secluded beach, way out of the way, has to be the most beautiful ‘find’ in Cape Town, I’ve made in the last six months. It isn’t as if we don’t drive past here fairly regularly, but there are several things that keep Smitswinkelbaai from becoming an overcrowded haunt rather than the deserted little enclave it is …

It is right on the bend of a road and if you’re driving too fast, which most people are, you’ll miss it completely; it is just before Cape Point Nature Reserve, so it’s far for most people (around 20 minutes outside of Simon’s Town); you can only reach it on foot down a very steep incline, made all the more difficult by erosion; if you don’t look for it, you won’t find the path down there at all (there is no sign above the path to indicate that the beach below is accessible); and the collection of several low-key wooden and stone homes as well as fishing boats give the impression that it is a private beach.

Surprisingly the viewpoint above Smitswinkelbaai is almost always busy. But most people seem perfectly content to admire the cove from the roadside. Cyclists, motorists and tourists are drawn here – the bay is exceedingly pretty. And the impression is that it is waaaay down to the beach from here (although it isn’t really, the path is relatively easy to navigate, but that’s between you and I).

The first thing that struck me on the perfect day on which we chose to visit – little wind, a good dose of sunshine – that also happened to be on the same day as a cycling race that had thousands of cyclists on the road between Ou Kaapse Weg and Cape Point, was the solar panels on some of the roofs of homes in the village.

There is no electricity here, if you can believe it. In fact, you’ve got to really love staying here to want to carry not only your food and belongings for a holiday down on your back, but your gas too. No wonder some residents have opted for solar panels.

I’m in love with the place even before I’m halfway down. There is an overriding feeling of simplicity. This is no Llandudno. There are no double storeys. In fact, the average home in the tiny village is made of wood and some barely qualify as a shack – I don’t know when I last saw holiday homes like these.

Most of them have been passed down from generation to generation and you need to know someone who lives here, to stay here – there are no guest houses or shops, so you can understand why the average person remains above on the road.

Someone has generously put up what passes as a fence to keep visitors from tramping through obviously eroded areas just off the path, and there are steps hewn into parts of the journey down and little signposts indicating which path to take to reach the beach. It makes the descent that much easier.

There is a little stream that trickles off the mountain right through the village, and there is the odd wooden plank bridge built to cross this, but it’s all basic and there is a general agreed upon snub of anything new or developed – a place after my own heart.

I’m still drinking this in and trying to balance the awkward beach bag I’ve brought along, made all the heavier by the spade my five-year old has insisted is vital to his happiness, as I kick off my shoes and skip and jump the last few metres on to the beach as my delicate soles take a blistering from the already overly sun-kissed sand.

At Llandudno this ridiculous entrance to the beach might have solicited the odd snide remark. Here, no-one turns a hair. They’re obviously used to people jumping for joy.

I greet a couple of the local women. They’re ensconsed on the beach with their kids, who, despite the cold are frolicking in the waves like seal puppies. And all around us are dogs in various guises. The locals love it here. As they say, there are no rules – dogs, children and the like are safe, and the setting is sublime.

Yes, the wind does whip through here, they agree, as I try to find some loophole in their idyll. And yes, they carry their gas down from the top. But, they smile, this just means that they have to prioritise. These women are obviously used to choosing between the essential five pairs of beach thongs and the crucial holiday read.

But they are very normal, down-to-earth people who value their little piece of heaven. One of them has been coming here since she was a child. As she laughingly describes, her parents used to leave them here for most of the six-week holiday, overseen by an uncle who lived in one of the shacks, to return only over weekends, with food. The other is a relative newcomer – she’s been coming here for 26 years.

Newcomers do come and go, they tell me. They seldom stay for long. But they’re a little anxious about the final top property closest to the cliff. If someone snaps it up and builds a monstrosity, they’re done for. For this reason they’ve tried, unsuccessfully, to become part of the nature reserve that borders the small bay. ‘They don’t like our dogs’, one of them laughs.

The water is icy, but refreshing, and the waves rather boisterous, but we swim nonetheless as the tide is obviously on its way in and we haven’t long before the beach is lost completely. There are numerous little pools further along the shoreline that are fantastic for beach combing – we’ll need to come back.

As we watch a couple of kayakers head into the beach, narrowly missing damage to their kayak on the boulders here. They peacefully sit and munch a snack before packing up. We see them re-enter the water on our way back up the hill where, from the wooden Roy Sassen memorial bench, we sit and contemplate just how it is that any of these houses were built in the first place – did they boat them in, or carry them down bit by bit?

What a perfect little spot. Who would have thought…