Hey la la, hey la la, hey la la – our voices were jiving, our hips swaying and our fingers clicking in time to Robbie Jansen’s slightly smokey voice as he gave vent to his own interpretation of Cape jazz – a fusion of musical influences ranging from traditional Cape Malay ‘goema’ and African rhythms to funk and salsa – in a song that most everyone knew, and I couldn’t help but learn given its enticing tune.

We were at Solms-Delta wine estate just outside Franschhoek for one of their renowned sunset supper concerts, ostensibly to celebrate the arrival of sunny days and long, balmy evenings – neither of which showed up for our concert – but this didn’t stop us thoroughly enjoying ourselves, blankets wrapped around our legs and shoulders … 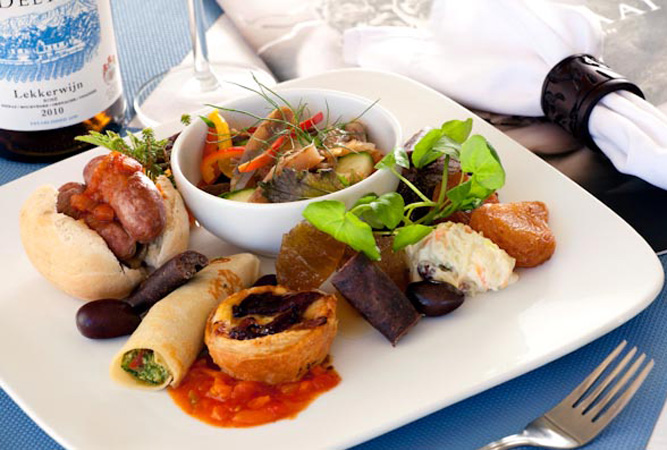 Saturday sunset supper concerts play out on the estate, just off the R45 in the Groot Drakenstein district of the Franschhoek Valley, from 31 October. The setting is the grass and front stoep of Fyndraai restaurant, the surrounding mountains in the near distance, silhouetted against the sky as it slowly darkens, the vineyards in leaf close by, and a stream trickling behind us.

It’s a superb venue. Even better still is that the drive here is an effortless 45 minutes, provided you don’t get caught in traffic, and the sunset concerts on Saturdays are set between 6pm and 8.30pm, which means you’re home in bed by 9.30 if you’re me, or you head off to further the evening’s merriment elsewhere, if you’re not. If you meet up with friends, which just about everyone at the concert appeared to have done, then you might want to get there a little earlier, as once the music starts, there isn’t much talking that happens.

Solms-Delta concerts are not light background music. The evening effortlessly swung into Cape Jazz – Cape Town’s very own style of jazz combining influences from the carnival, the church, African and America – with the appearance of the estate’s band, made up of employees and family from the local community. Their ‘energetic, foot tapping, happy-happy’ music got the party going full tilt as people bobbed along, beat time with their glasses on the table or spontaneously leapt up to dance on the grass infront of the restaurant stoep, on which the performers swayed.

Solms-Delta is busy establishing a Cape Rural Music Centre – ‘Music van de Caab’ – at the estate to explore the origins of Cape music and the influences that European folksongs, the Khoekhoe, San musical traditions and other slave cultures from India, Indonesia and Africa have had on it. In the process they have uncovered a wealth of musical talent among the farmworkers and have been instrumental in reviving and further developing these musical styles, hence providing a stage for the locals. 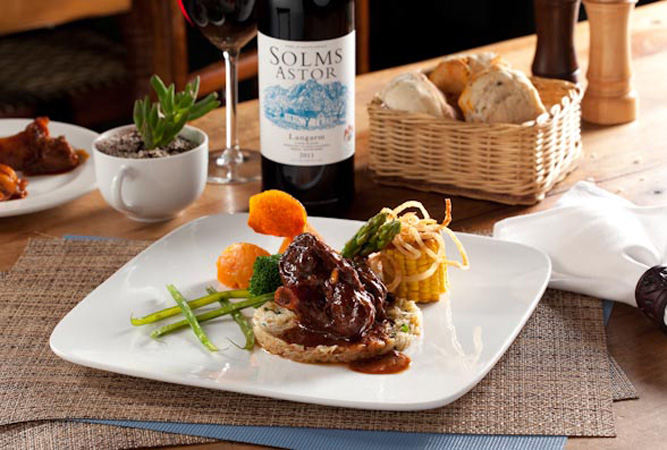 As they were jiving, Robbie Jansen drove up with his band, and ambled across to join us at our table, oxygen tank in tow. It’s no secret that Robbie was very ill in 2005 and that the state met his bills, but the consequence is that he is seldom without his supply of oxygen, and can no longer travel long distances because of his respiratory condition. Robbie the man is not phased by this at all. When questioned, rather than seeing this as a hinderance to his continued performing throughout Cape Town, he sees it as an enormous opportunity to keep on playing.

And play he does! Completely self-taught, without much formal musical education – something he has in common with most top jazz performers the world over – Robbie’s rough, yet lyrical voice and his versatile saxophone sound are the result of over 30 years in the music business. Part way through, Robbie hauled out his flute and inspired the audience with yet further display of his virtuosity. He is regarded internationally as at the forefront of Cape Jazz, and has contributed and collaborated with some of the country’s greats, including Abdullah Ibrahim, Basil ‘Manenberg’ Coetzee, and Johnny Clegg, who got him to play flute and saxophone on Juluka’s debut album, Universal Men.

No surprise then that one of the Solms-Astor wines on the estate is called Cape Jazz Shiraz, which, to Solms-Delta’s knowledge, is the first ‘Lambrusco’ style wine made in the Cape. Slightly sweet and low in alcohol, the wine has what is described as a ‘celebratory’ fizz, and was just one of the wines on sample at the concert.

We had an amazing evening. The food in the form of a ‘Kaapse kos’ buffet was excellent, the company at our table stimulating, and the evening’s music a feast! According to the line-up, Robbie Jansen is back on 23rd January. But in the interim there are other notable performers that include Oom Jacobus and Tannie Hester Cloete the inimitabe guitar duo from Namaqualand, Hilton Schilder with his particular style of Cape Jazz with indigenous San flavours, and Ghoema Jazz with Mac McKenzie, to name but a few on the agenda. 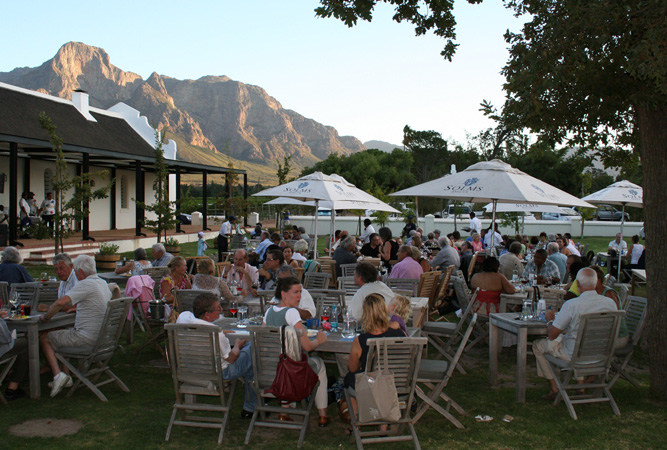 The concerts run from October 31st to December 19th and, after a break over the festive season, the schedule will be repeated from January 9th to February 27th. Don’t miss the chance to celebrate regional Cape folk heritage flavours on a particularly unpretentious and glorious wine estate.

All profits from Solms-Delta wine sales are shared equally between Solms-Delta (Pty) Ltd and the Wijn de Caab Trust, whose beneficiaries are the historically disadvantaged and employees of Delta Estate and surrounding farms and villages.