Hidden in the heart of Stellenbosch where one least expects to find a garden, and where Neethling, Murray, Keefom and Van Riebeek streets meet in amongst residences, historical buildings and guesthouses, lies one of the most beautiful gardens imaginable. And I say this with all due respect to the myriad gorgeous gardens we have in South Africa. 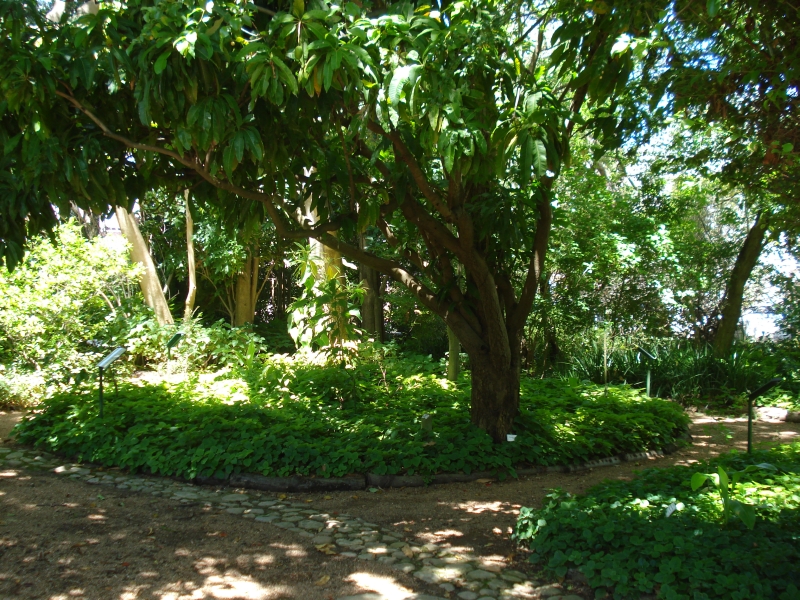 Actually, the official entrance is in Van Riebeeck Street, lest you confuse yourself trying to find the not-signposted streets I’ve just mentioned. The ‘new’ entrance was only completed in 2010, made possible when the University (to whom the garden has belonged since 1922) came to an agreement with the local municipality to use a small park that links the Stellenbosch Botanical Garden to the historical town centre.

But like many of the students that wander through here as the whim takes them, we used a side-entrance through a couple of white pillars.

The small garden (only 1.8 hectares) is the oldest university garden in the country and prides itself on being an educational garden, with both indigenous and exotic plants in amongst the specimens at which you can marvel. And it’s a sight for sore eyes.

Not only is everything individually labelled, so that people like me who don’t know their Arecaceae from their Restionaceae (that’s palms from reeds to you) will easily find their way around. Its smallness works for it, in the sense that it is easy to wander through in an hour, and because one can see so many different species of plant in such a compact area. 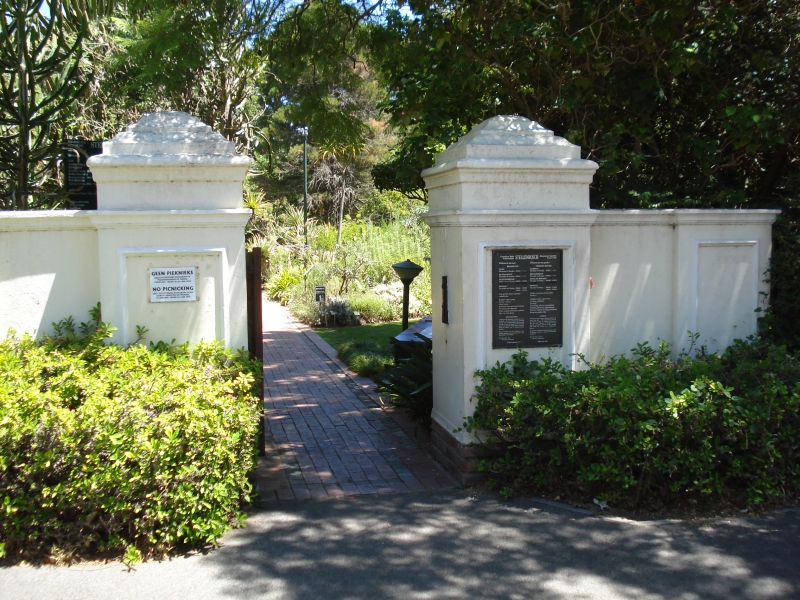 The garden is also something of an arboretum, even though there is an area labelled as arboretum, the whole garden in fact is alive with an enviable list of trees that include the copperbeech, red alder, St John’s bread tree, yellowwood, camphor, mango, sweet thorn and tulip trees.

The presence of the myriad trees means that a lot of the garden is in shade, making an escape here on a hot day in summer something akin to heaven. Add to this the water features, and the beautiful fountains in the western reaches of the Neethling Street parts of the garden, and you discover that you could while away hours here.

In amongst the bowers, on benches, at tables and beneath trees there are a series of students – some on romantic assignations, like the couple my son and his cousin unwittingly disturb whilst chasing one another towards the bromelias via the koi pond, others drinking in the beauty through the lenses of the cameras. But there are also those here simply to read or chat with a friend.

Officially, the garden is not one in which you can picnic. This is, no doubt, for a couple of reasons: one, there is a lovely restaurant in the garden known as the Katjiepiering, and the other is the litter that could become a problem.

I am surprised to see bins placed at strategic intervals, even if one of them insists that it is not for litter. At Kirstenbosch, where picnics are allowed, there is a low tolerance of litter and bins are not in evidence at all – you leave with what you bring. 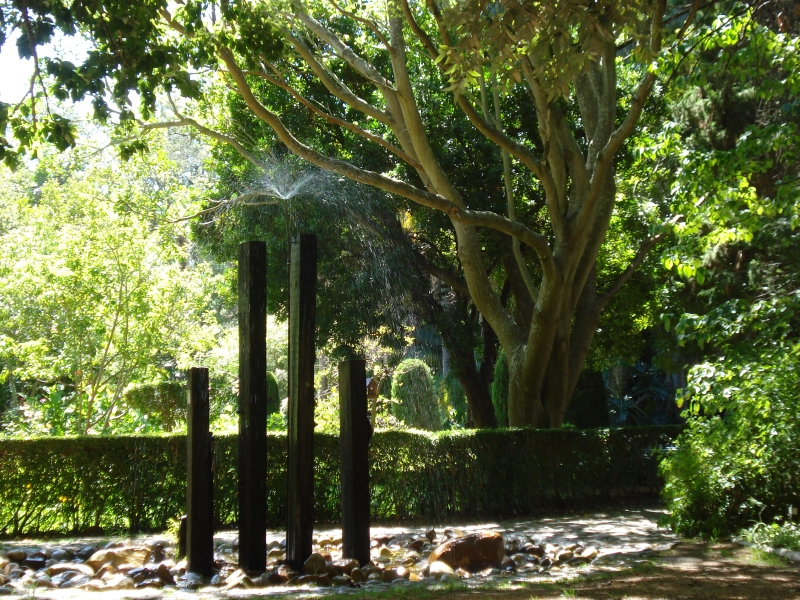 But on to Katjiepiering, for the restaurant/coffee shop was to prove a god-send, given the heat. Katjiepiering lies in the heart of the garden, the enviable bamboo to one side a natural screen from the garden. Tables litter the shady outside area infront of what is known as the ‘studio’ but which actually looks like a beautiful old house. I assume that during winter, the restaurant moves indoors.

Surprisingly, despite its being a weekend, the Katjiepiering is not inundated. It is busy, understandably, and there are a mixture of parents meeting students, students, and visitors to the city. We are the only ones with children, but there is a policy of welcoming children and a kiddies’ menu, so we’re in good company.

Katjiepiering is open every day between 8.30am and 5pm, during summer. From my position under an umbrella, I look up at a gorgeous old tree, its bark invaded by a parasitic plant of some description, and am amazed by nature’s possibilities – not all plants need roots to survive, some will simply borrow anothers, and seemingly without much pain involved. There’s a message in there somewhere…

The menu is a mixture of lunch and breakfast time fare, coffee, teas and cakes (for those with sweet teeth).  The initial page regales us with a description of how the garden is one of the ‘best kept secrets in town’ and that one should share the secret with others. I can see how this would be in Katjiepiering’s best interests, but I can also understand why telling everyone might not be such a good idea, and possibly why it remains hidden. 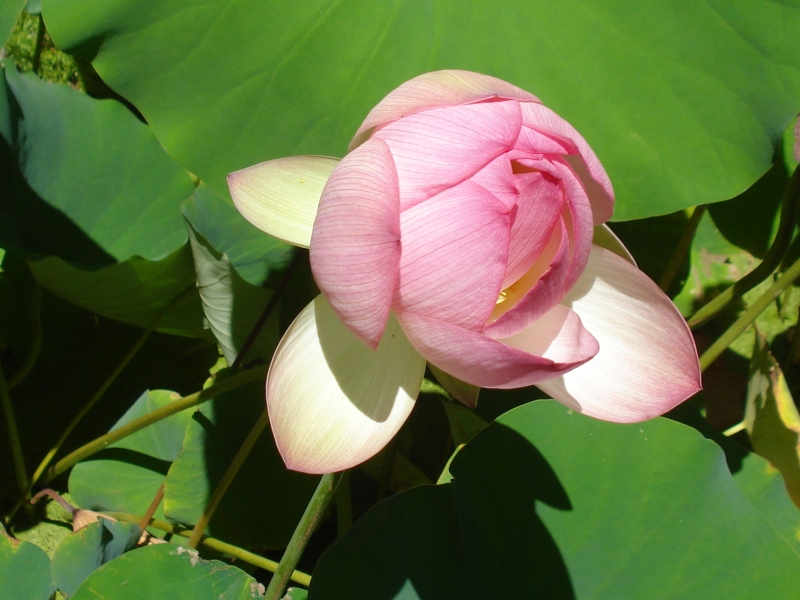 Two pots at the front door of the restaurant sport what is known as Gardenia jasminoides, or katjiepiering’, grown because the flowers smell so sweet, but turn brown if touched or bruised.

Despite being native to China, they were introduced to the Cape before 1750, brought over from England. The Afrikaans word is from the Malay name for the species – ‘Catshopiri’. So it isn’t the restaurant’s play on the idea of a cat-saucer. But I think it’s rather clever, nonetheless.

After a lunch of really tasty wild mushrooms in ricotta on ciabatta, we truly begin uncovering the garden.

I wander on stepping stones across water where I spy what I interpret to be some of the most beautiful water succulents I’ve ever seen (in grave danger of offending plant fundis, bear with my interpretations), I wander down stone pathways – hedges, trees and sweet-smelling shrubs my companions, I discover pink lotus flowers in ponds close to the green houses that contain tropical plants and succulents and across on the other side where yet further ponds are close to the arboretum.

I wander under bowers, feel bound to sit awhile on stone benches placed out of the way, listen to water on boulders, drink in the sight of orchids in the orchid house, and marvel at the beauty of it all. My son and nephew try to catch tadpoles in a nearby stone fountain, and end up drenched through by the water. Good thing I remembered to pack a change of clothes. 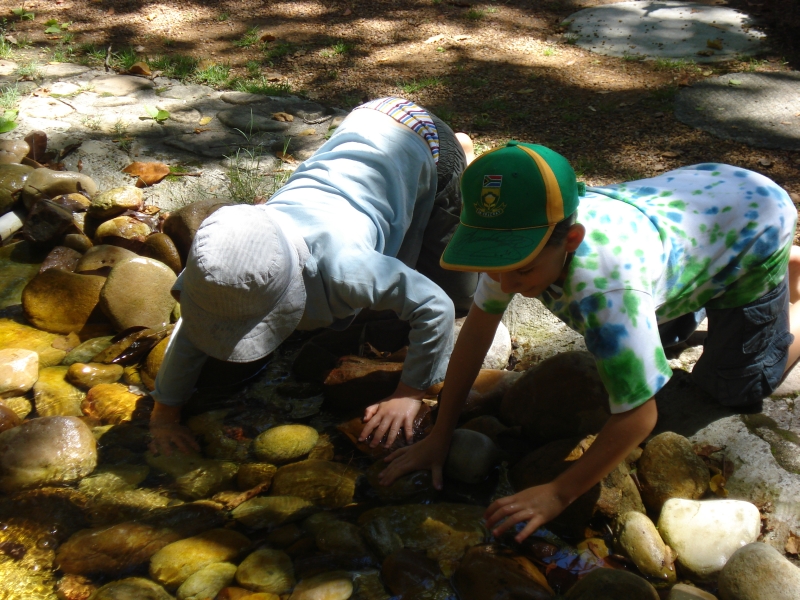