However wordly and well-travelled you are, meeting a man who has had an ear and part of his nose bitten off by a bird of prey is an unusual experience. The ranger as the camp site we stayed at in Bainskloof had a remarkably good sense of humour for someone mauled by an eagle. Asked about it, he merely shrugs. As a snake wrangler and keeper of the type of birds that can take off body parts with a single snap of the beak, apparently it comes with the territory. I couldn’t help but be glad that I didn’t inhabit that territory. 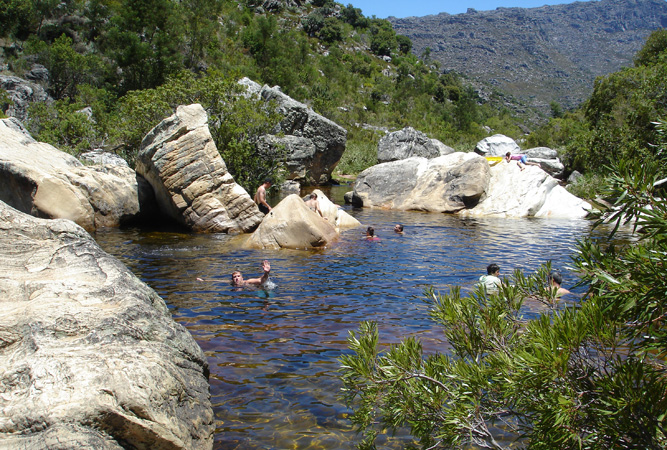 Bainskloof pass (a part of the R303 regional road) runs from Paarl, over the Limiet Mountains, to Ceres, Northeast of Paarl. This 30km stretch of road, with it’s highest point at 595m, is both a historical monument in itself, having been built in 1853 by Andrew Geddes Bain, a Scottsish Settler without any formal engineering training, although it is still regarded as one of the best passes in the country, and a unspoilt nature reserve, which forms a part of Cape Nature Conservation.

Interestingly enough, Geddes Bain, the constructor of the pass, has been praised for his contribution to paleontology as well as his uncanny engineering skill, due in large part to the fossils unearthed and preserved during the construction of this and other roads.

En route to the pass from the historic town of Wellington, one passes the Bovlei Valley Retreat, a luxury guesthouse located on a working wine, lavender and fruit farm. Other attractions for wine lovers on the way to the pass include the Napiery Winery, named for Sir George Napier, the governor of the Cape from 1837 to 1843, who named the town of Wellington after the Duke of Wellington, as well as Welvanpas, and Nabygelegen Estates.

The pass itself attracts many eco tourists, particularly in summer, when hiking, swimming in the river that meanders through the valley at the foot of the pass, or visiting the Tweede Tol or other picnicking or viewing locations along the pass, to enjoy a leisurely day viewing the fynbos and wildflowers that abound. 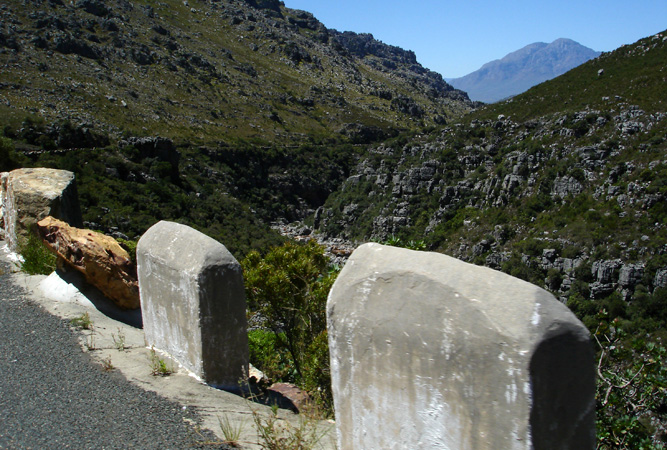 Other attractions and points of interest along the pass are the Hawequa State forest, which straddles the crest of the pass, and magnificent stone formations such as Bells Rock and Dacres Rock, an enormous rock formation that overhangs the road, and where Reverend Dacres delivered a sermon on the opening of the pass.

A little further along from these formations are the starting point of some of the more famous hikes in the area, with names like Rockhopper, Murasie, Bobbejaans Rivier and Happy Valley, these tours vary in intensity and length, and can be arranged through Cape Nature Conservation.

As one leaves the pass, the patchwork quilt of the Witzenberg and Breede Rivier valley lies ahead, with towns such as Tulbagh, a small, equally historic town that boasts it’s own wine route, and many other attractions, such as the Tulbagh Hotel, and no less than 32 national monuments.

Or visit the Limietberg Nature reserve adjacent to the pass for more nature and hiking based entertainment. Further along from the pass, lies the town of Ceres, a fruit growing region popular with locals for cherry picking expeditions and playing in the snow in winter, or visitors can choose to continue on to Worcester, Rawsonville and beyond. 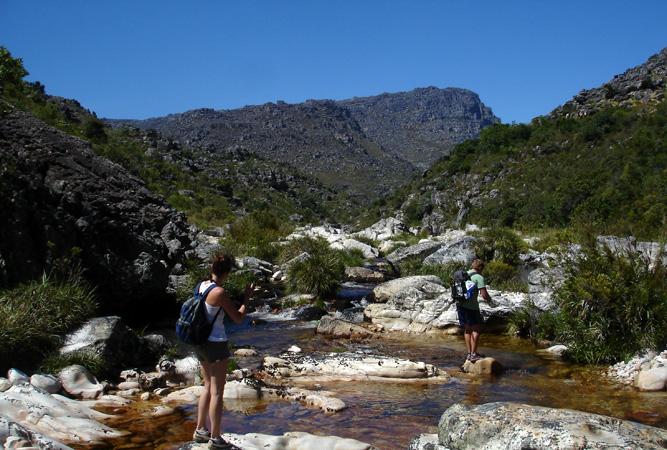 This unspoilt pass, which remains largely as it was when it was first built, gives a fascinating insight into what it must have been like to travel in the Western Cape many years ago, before such innovations as the Hugenot Tunnel, and is well worth a visit.

New Year, New Resolutions. Here are some you CAN keep…

So 2018 is finally here and to mark the start of the new year most of us come up with a list of resolutions - goals we'd like to accomplish, things to learn, changes to make - many of which we abandon after just a few days. We'd like to help you choose some re...

Having just accustomed ourselves to the early morning gloom of the Huguenot tunnel, we emerged on the Worcester side to piercing sunlight and a day that promised not only to be free of clouds, but also incredibly hot. Early March is really not a good time t...

Where do you find yourself in just an hour and fifteen minute drive outside of Cape Town? Well on Saturday morning I found myself at a friends holiday home in Bainskloof, and no I wasn’t teleported there, it was an easy drive. Three good friends and I decided ...