Just outside the town of Napier, en route to Bredasdorp, sits a beautiful old Cape Dutch farm house, just off the road, with a bright red roof and white gables and walls. To the side of it stands the red windmill, admittedly minus its blades, but that’s a story for later.

The Red Windmill isn’t the farmstall it first appears to be. Instead its something of a collection or collaboration of four independent shops under the umbrella of Red Windmill. I bump into Dee Robinson. She’s drinking coffee on the stoep with Erica (of Dave’s Country Kitchen) and Lesley (of Cool Beans sweets shop). Everyone’s laughing and generally having a rather festive time. If this is what collaboration looks like, count me in.

It’s late in the afternoon on a Sunday and the lunch rush is over. Dee explains how she just had to have the house when it came up for hire last year. “I’ve had my eye on this building since we arrived in Napier from Cape Town,” she smiles. “I didn’t know what we were going to do with it, but I knew something would emerge.”

And emerge it has. Dee and husband Neal run a nursery and landscaping business that they brought with them from Cape Town from the side of the beautiful old house, since April 2010. Dee also runs a trendy antique clothing boutique filled with items from the 40s through to the 80s in one wing of the house, called Vintage, which she says attracts the young girls. You can pick up some gorgeous creations at really good prices.

“Our collaboration is really a wonderful idea,” elaborates Dee. “The minute Dave and Erica were available, we convinced them to come in with us at the Red Windmill, and it’s great, as all of us bounce ideas off one another, and no one individual feels the stress of having to get it all right, there’s a team spirit going on here.”

She is right. Friends and patrons alike are now seated outside under red umbrellas in amongst the scatter cushions on which Dee’s two little jack russels are spreadeagled out in the sun. There is a relaxed atmosphere to the place that extends indoors where another group have settled in for afternoon tea.

Dave Spilhaus, of Dave’s Country Kitchen has brought an added dimension to the affair, for what is a farmstall without food to sit and eat. A selection of breakfasts, tea time treats and lunch fare, including one of the only country menus I know offerring a bunny chow (home made bun filled with lamb curry), all served in a totally unpretentious environment, makes a stop here far more than a stroll through an indigenous nursery.

I follow Dee outside. She has countless ideas for the place and I sense that there is a large element of play to the way the team approach their days here at Red Windmill. Dee walks me through her, admittedly little, indigenouse and succulent nursery. “We do quite a bit of landscaping of gardens in the village,” she explains. I’ve already caught a glimpse of the feature Tuis&Home did about them, on the walls of the nursery.

We stroll (because in the country you don’t walk anywhere briskly) past a water feature her husband Neal has just whipped together to beyond the nursery to a small forest of blue gum trees. “The farm is a working sweet potato and red onion farm,” she explains, “so it’s a real working farm.” I agree that this gives it a sense of added vibrancy as we look out yonder to surrounding fields of wheat.

“Just here,” Dee indicates a clearing they’ve just made in a natural circle evident in amongst the trees, “is where we’re going to lay the labyrinth.” Dee explains how every time she ventured out in amongst the trees it seemed to her that natural circles became evident, and that they were calling out for some sort of creation. “I woke one night and just realised that we had to put a labyrinth in here for people to walk. With these views out over the farm lands, it will just lovely.”

I agree, thinking back to the other labyrinths I’ve walked already – Boondocks just outside Nelspruit, The Edge in Hogsback, Bodhi Khaya just outside Gansbaai, all of them based on the Chatres Cathedral as Dee intends doing, and I wonder if each of their creators has been called to place them around the country; if they are to play a very necessary role in reconnecting us with our selves in an age where almost every other activity diverts us from the connection.

Whilst I imagine, Dee is already pointing to the out buildings where she wants to add a wine tasting element, and probably another shop as well as a couple of donkeys for children. Speaking of children. I nip round the front to see how the other parts of my family are doing, to find my son at play in amongst the jungle gyms and see saw with Jessica, Dave and Erica’s two-year old. For the first time in memory, my son is displaying a gentleness I’ve not seen when interacting with other children, and I’m relieved to see it.

Back inside the house I explore Cool Beans. It’s a lot as I imagine an old-fashioned sweet shop must have looked – glass jars filled with brightly coloured balls and other shapes and size sweets. I can imagine the average child easily gets lost in here, emerging with a brimming brown paper bag. 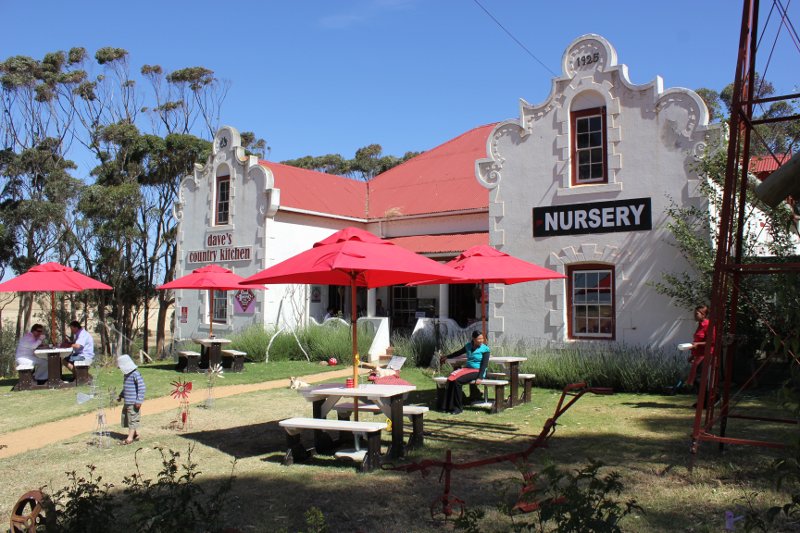 Inside the main building the nursery has also added a ‘kitchen table’, which is what gives the place its ‘farmstall’ element, filled with local jams, pickles, olive oils, free range eggs (if and when Dee’s Koek Koek hens feel up to the occasion) etc. And one can hire the whole Red Windmill space for an event, where the space and wonderful food, the atmosphere of candle lit nights would make this positively unique.

And the headless windmill? Well, it took Dave and Neal long enough just to move the base to where it is. The blades will just have to wait until a certain truck is available. And this is the country. It could take a while…

Where to find The Red Windmill:

The first thing to grab my attention, other than the obvious prettiness of our accommodation, is the name of the place we choose to stay just outside of Napier - a little town in the Overberg close enough to Caledon not to feel like a trek-and-a-half for a wee...

Napier is a pretty town surrounded by fields of barley and wheat and was named after the Governor of the Cape at the time; Sir George Napier. Interesting shops and eateries line the streets of the town and if you are in town you must make sure you visit The...

I Love Napier Because …

Hi, I’m Craigan Millar from The Suntouched Inn in Napier. Napier IS BEST KNOWN FOR the being the little arty town on the way to Arniston! GET YOUR PICTURE TAKEN AT the biggest sundial in South Africa, at the Napier Muncipal Building. THE BEST scen...