Now reading: The wild flowers are here – where you’ll find what this weekend

The wild flowers are already putting in an appearance! Certainly local radio stations have begun broadcasting that they are out and about for all to see. And little white and pink oxalis are already blooming in and around Darling, whilst gorgeous drosera (more commonly known as sundews) are beginning to raise their heads. 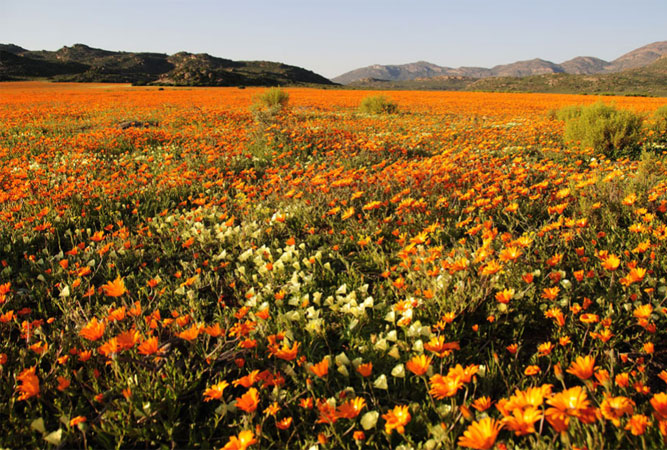 From now until the middle of September you can expect, weather depending (and it has been a rather dry season for some parts of the flower route), to see a flurry of flowers; a burst of colour; a carpet of blossoms; proof that spring has sprung! All the way up the west coast of South Africa.

Every year these gorgeous blooms spring out of nowhere and cover just about every possible piece of formerly barren soil in a bevy of colour, all the way up the West Coast into the Cedarberg and north to Namaqualand, where despite its dryness, this part of the country gives vent to a display of vygies, gousblomme, nemesias, ixias and babiana, amongst a wealth of other flower genera, in a profusion of colour. Proof that nothing is ever what it seems, things always change, and out of barrenness comes fecundity.

All the way from Darling and the West Coast National Park through Clanwilliam and the Cedarberg to the arid beauty of the Knersvlakte and Hardeveld, are little blooms, blossoms, buds. According to one source in Paternoster, the flowers have been visible since the last week of May 2010, with bobbjaantou, kattekruid, bietou, sand viooltjies and vygies already in evidence. 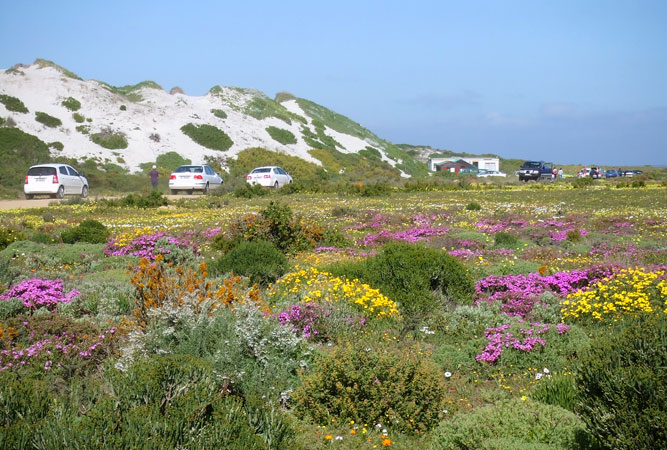 Living in Cape Town means that even in a day trip you can see vygies and wild flowers. You might not be able to get all the way to the Namaqualand but that does not exclude you from access to this annual wonder. Tourists travel here from all over the world to catch a glimpse of what is on our doorstep.

Capetonians can easily reach the Riebeek Valley, where there are already arum lillies along fences of farms and a rather lavish display on the edge of Zonquasdrift Road, across the railway line. Waterblommetjies too are out in small water depressions, as well as oxalis and fynbos.

If you are heading out to the area between Saldanha and Vredenburg look out for daisies, lachenalias, viooltjies and sierangs, whilst in the Bergrivier area pink vygies, yellow surings, stinkkruid and yellow harpuisbosse are in evidence in the open field between Jakaranda and Tecoma streets, Hibiscus Street (next to the chemist) and the road between Velddrif and Elandsbaai. 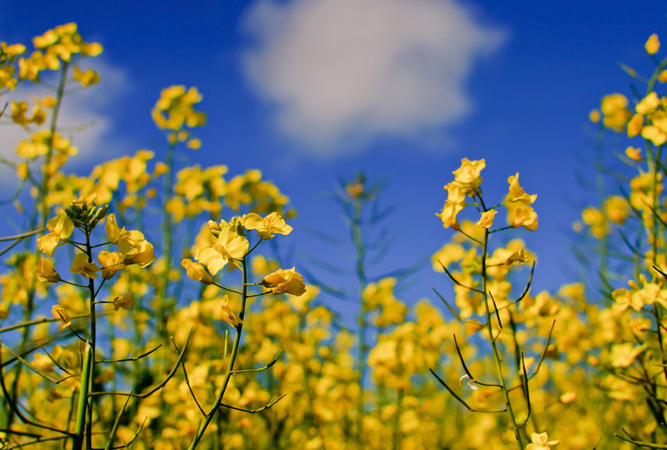 Heading into the Northern Cape

A little further north, where those more serious about ‘doing’ the flowers head, is claiming an early flower season this year.  Vanrhynsdorp, according to a local expert,  has had more rain than last year, which wasn’t a particularly good year. They’re hoping for a bumper ‘crop’ as a result, fuelled by the fact that you can already see Karoo and Namaqua daisies, gousblomme and vygies in large numbers around Vredendal, Klawer, Lutzville and Strandfontein.

There are also patches of hongerblomme and orange daisies between Vredendal and Vanrhynsdorp, whilst en route to Lutzville expect to already find white Namaqualand daisies, yellow vygies and perdeblomme.

Between Citrusdal and Klawer there are already large patches of white Namaqualand daisies, whilst along the N7 between Citrusdal to Springbok some rounded shrubs are flourishing with orange skaapbos flowers.

On the dirt road between Matjiesfontein and Nieuwoudtville there is a gorgeous abundance of Namaqualand daisies, and cup-and-saucers. You can do the route in an ordinary sedan, you don’t need an off-road to drive it. 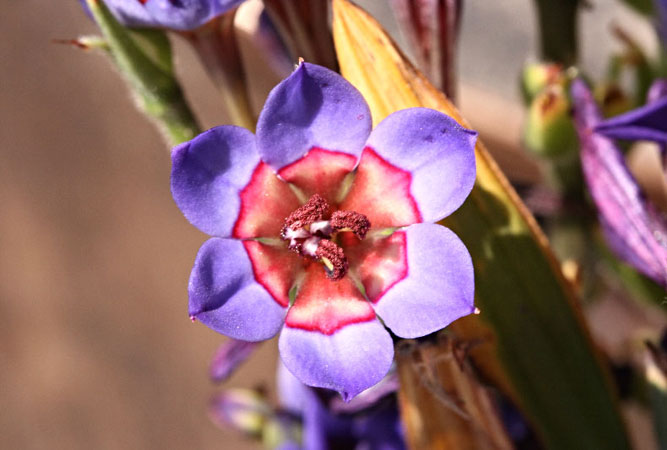 And on… the Namaqualand

Rain up here has been a little on the sparse side and there are fewer flowers than last year. You’ll find the largest displays of flowers at the moment in the Namaqua National Park, which is already an orange carpet of blooms if photographs taken on 27 July 2010 are anything to go by. Here you’ll find glasooggousblom, katsterte, pietsnot and perdeblomme. See in particular the coastal region of the reserve. The rest of the Namaqualand is still waiting for rain.

So, places like Loeriesfontein have no flowers because of lack of rain and between Bitterfontein and Garies there are only patches of Namaqualand daisies. However, west of Garies, between Sarrisam and Soutfontein, beautiful patches of flowers have been sighted, as well as in the area between Garies and Groenrivier. Again, these are gravel roads, but a normal car should manage just fine. The latter route is gravel for the first 40 kilometres, and you might have to dodge some serious potholes.

Hondeklip Bay has an extravagant display of blooms, considering the lack of rain to the region, but this is because of the coastal fog. 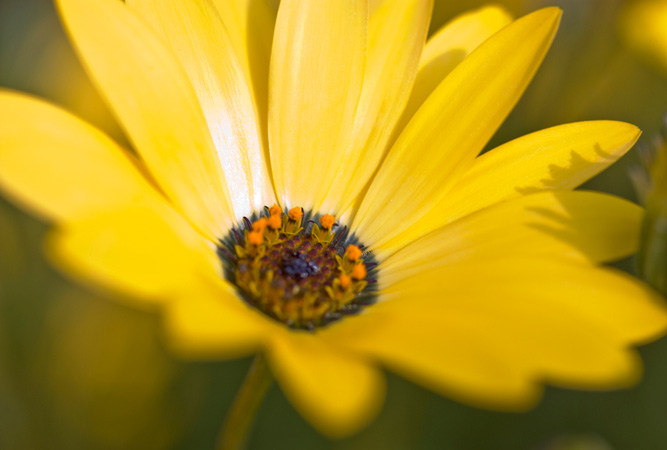 Flowers in the Namaqualand are not so hot right now, other than in the Namaqua Park itself; flowers are not coping well with the warm berg winds and lack of rain generally speaking. In some parts of the Northern Cape – like Vanrhynsdorp – there are gorgeous patches, whilst the place to head right now is Clanwilliam Dam towards Citrusdal – judging by reports – for despite the flowers being  very early, they are prolific.

How best to see the flowers:

Those in the know advocate that the best way of doing the flowers is to head as far north as you’re prepared to go – be it Clanwilliam, Vanrhynsdorp or even Springbok – and then drive south with the sun behind you. In this way, you’re more likely to see the blooms as they face the sun.

Luckily for Capetonians, the best of the flowers at the moment are around Clanwilliam and Citrusdal. Try this route: drive straight out to Vanrhynsdorp and include the R27 and R364 via Nieuwoudtville on your way back to Clanwilliam, Citrusdal and the West Coast National Park.