If you are after a simply beautiful drive through rugged terrain then make sure you take the 14 kilometre long Tradouw Pass between Barrydale and Swellendam. It is so craggy and arduous that the mind boggles as to just how the pass originated.  To say that it is breathtaking is doing it a disservice, and we travelled it in the pouring rain!

All I can say is that the man who designed it is a genius. Known amongst his contemporaries as ‘the man with the theodolite eye’ (for those who don’t know, a theodolite is an instrument to measure horizontal and vertical angles) Thomas Bain, not to be confused with his father Andrew Geddes Bain who constructed eight passes including Bainskloof Pass, pulled off thirteen such passes in the southern Cape during the 1800s and each of them is a masterpiece. But this one in particular deserves a travel for its beauty.

Completed in 1873 and built with the help of a large gang of prisoners (one can only imagine the back-breaking work!), the Tradouw Pass perches some 315 metres up in the mountains so that most of the trip winds within a series of undulations of the Cape Folded Mountains.

There is a reason for this perpetual winding, other than there are a great many mountains between Barrydale and Swellendam. Bain’s respect for nature meant that he applied the logic of river courses, and their preference for the path of least resistance, to this pass, and so adopted the same winding course as the Tradouw River down in the gorge below. 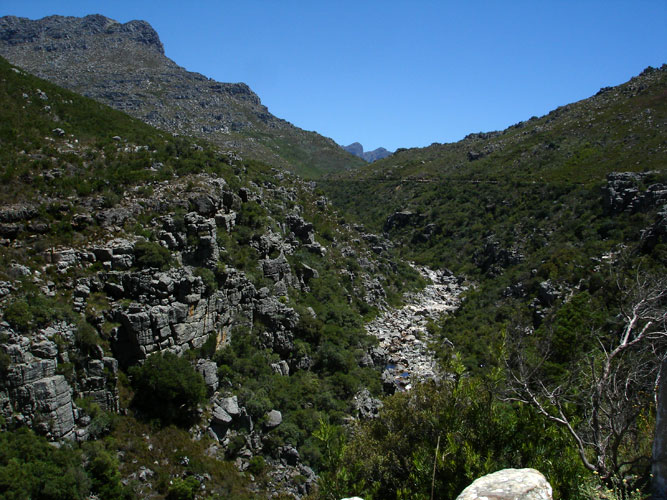 If like us, you take the Tradouw Pass (Tradouw means ‘footpath of the women’ in the Khoi language) from the Barrydale side, you capture the most beautiful part of the pass first. Just outside Barrydale, heading back towards Cape Town on Route 62, there is a left turn to Swellendam. Even in the pouring rain the sign is easily navigable, so there is little chance that you will miss it.

The route starts off rather windy, wending its way through seriously mountainous terrain, the jagged sandstone precipices looming really close to your car window. In a series of notes on the pass from the Tourism Bureau, compiled by Tjokkie Cooke from Barrydale, the Oskloof is along this part of the pass, where cattle grazed on the side of the mountain and were brought down to be fed with salt. You can climb the mountain to view rock art.

There is also apparently a Tollgate house around two and a half kilometres from the start of the drive, but in the rain we didn’t see it. In the old days even ostriches walking through here were charged accordingly. Don’t confuse it with Stone Haven, a house built in 1928 by a Scot who settled here. And you’ll notice beautiful stone walls on the mountain side with pretty brown river stones that line the water sluit.

High mountains follow and a waterfall known as Picnic Bush, and if you look carefully you will notice that parts of the pass have been rebuilt over the years, particularly around here where one can see the old route following the course of the stream, whilst the new road, on which you’re riding, is higher up the side of the gorge (away from the waterline). 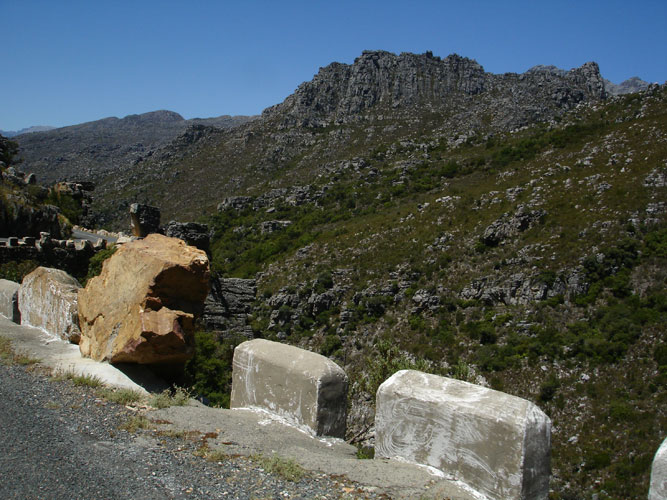 The road has now entered the heart of the Langeberg, through a particularly narrow gorge up which it climbs, and if it weren’t for the rain, we could have seen the water of the river below gurgling away. Various look out points follow and then the pass descends from what is its highest point at 351 metres above sea level.

The descent brings one to a concrete bridge known as the Andre Uys Bridge, which obviously replaced the little teak bridge that now rests, almost concealed, next to the road. This little bridge known as Witbrug, which was once a stone bridge called ‘Lettie’s bridge’ after John Barry’s wife (long history, but the Barrys are Barrydale’s namesake) washed away in 1875, and was replaced by a kiaat bridge painted white, hence the name.

Virtually at the end of the pass is Lismore, which still belongs to the Barry family and has since 1844. Thomas Bain and his family lived here whilst supervising the building of the pass, and it served as a horse breeding farm for the Dutch East India Company. You can stay in cottages on the farm.

The road seems to almost seamlessly merge with the road to the little village of Suurbraak, which appears as if out of nowhere. On a not-rainy day Suurbraak would be a seriously colourful and quirky little village. Even with the rain, we slowed and studied the array of cottages, some thatched, some double-storyeyed and others seriously in need of love and attention. The village runs only for about two kilometres, but arising out of the mist as it did, the history as a missionary settlement is palpable. 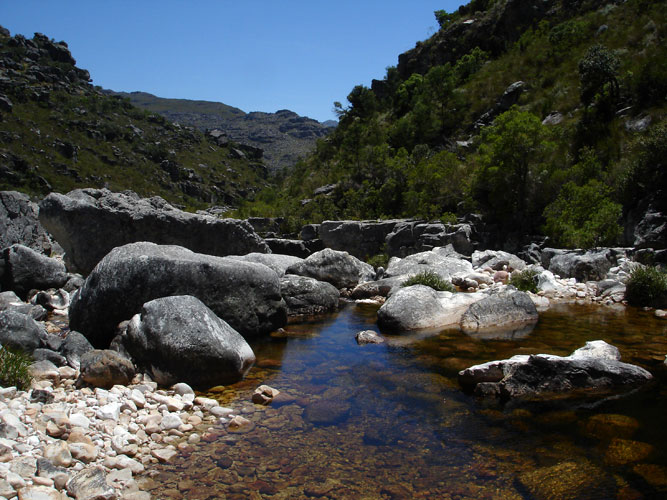 Giant oak trees, the Tradouw River (some people call it the Tradouws River) and the Langeberg Mountains make for a seriously gorgeous setting. But it is isolated and remains so, limiting the financial resources of the people living here – smaller farms are ploughed using old farming methods and most agriculture is done by hand. Most households own at least a cow and donkey drawn carts are often sighted.

What a beautiful drive!