Tulbagh’s allure is immediately obvious. The scenery, which includes the towering peaks of no fewer than three mountain ranges, is jaw-droppingly beautiful, and the obvious seclusion of the horse-shoe shaped valley in which it lies simply adds further appeal to the already gorgeous countryside. But scenery in Tulbagh aside, the town’s secrets are well hidden, although it takes but a minor delve beneath the surface to unearth them, as I soon discover …

The requisite speed reduction to pass through the town reveals little other than the conventional run of shops and stores that keep small towns like this one running – a spar, a chemist, the odd café, a butchery, a shoe factory, a bottle store and other odd mini supermarkets. 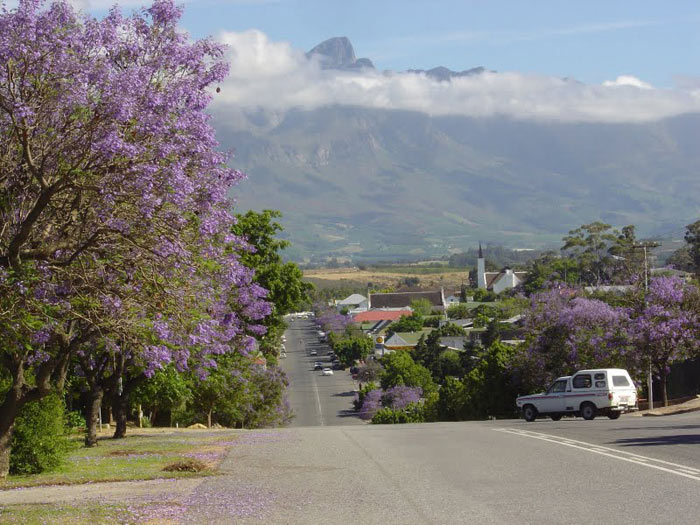 But there are also a couple of other items that catch your eye. There’s the rather inspiring NG church that sits austerely on the far edge of Van Der Stel Street (the main road through Tulbagh), a couple of rather obvious estate agents – a sure sign that properties in this town are sought after – what looks like a theatre, and an attractive looking deli known as ‘Things I Love‘ that demands closer investigation.

Already my interest is piqued, and the idea of exploring further heightened when I discover Church Street, in the last rays of sunlight – an almost surreal light in which to discover a row of incredible architecture, accompanied by the calls of virtually tame peacocks who join me on my trawl down part of the road.

The 32 buildings that make up Church Street, which runs parallel to Van Der Stel Street, are famous since an earthquake on 29 September 1969 rent the town asunder, after which each of them was restored to its original form. Each building is a provincial monument and the street has the largest concentration of such monuments in one street in South Africa. 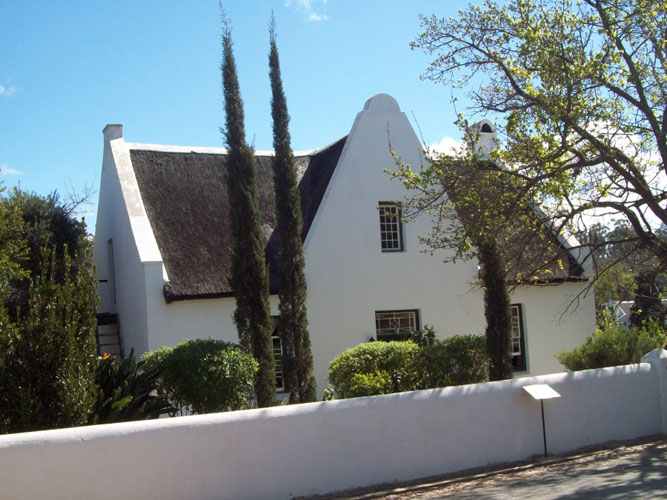 Despite sounding like a collection of museum pieces, Church Street is arguably one of the most lovely avenues anywhere in the country. Both sides of the street are graced with Victorian, Edwardian and Cape Dutch architecture, with accompanying boards explaining the year they were built, the style and who originally owned them.

Today most of them are a collection of Tulbagh guest houses, upmarket restaurants, deli’s, galleries, home industry, antique shops and enough wagon wheels, and lilac and coral trees to weave a sense of magic to the avenue. Some of the properties lie in enormous gardens, thick with grasses, orchards and flowers that are rarely seen nowadays, because of the rest of the country’s love affair with six metre high walls and barbed wire.

But Tulbagh does not start and end with Church Street, although one would be remiss to pass up a stroll down this part of town. Sadly, the rest of Tulbagh did not receive quite the same post-earthquake treatment as this particular avenue. It suffers from a rather hotch potch collection of pre-fab houses, rather dilapidated seventies renditions, and other more modern affairs that serve as second homes for Capetonians and the like. 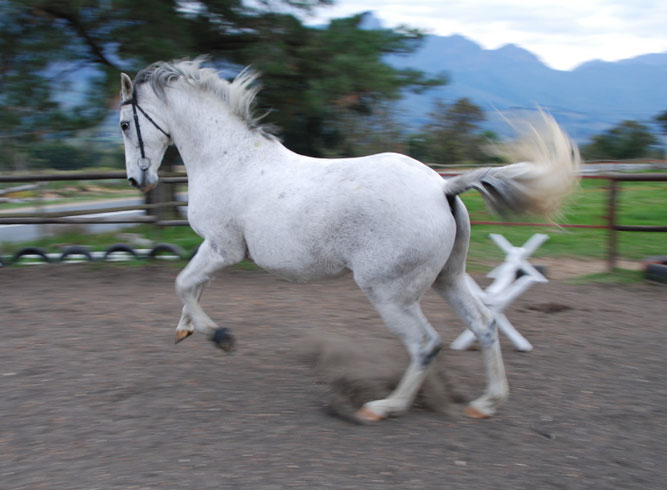 Things I love is a delightful deli that runs through from its position on Van Der Stel Street to its back entrance on Church Street. The pretty deli, gift and coffee shop has one salivating on entering, not only because it is particularly well laid out but also because of its delectable fare that includes organic veges, any number of pestos, sauces, wines, cheeses and other deli type delicacies.

Renowned for its decadent high teas, breakfasts and scrumptious lunches, the deli is now on new premises, having moved from its former position on the Kloofzicht Estate. They’re also responsible for the monthly Tulbagh Farmers Market that now takes place at the deli on the last Saturday of the month from 10h00 until late. (Things I Love in Tulbagh, 61 van der Stel Street, Tulbagh, Telephone: +27 (0)23 230-1742).

Chris van Niekerk enthusiastically waves me through his theatre. Saronsberg Theatre, also on Van Der Stel Street (I was right, there is a theatre!), is the new baby (open since May 2009) of Saronsberg Estate and Chris van Niekerk of Sewende Laan fame, who also manages the theatre, having cut his teeth on a similar project in Rosendal in the eastern Free State, although I can see by the gleam in his eye, that Saronsberg is his pride and joy of the moment.

Whirling me through the minute but more than effective backstage that includes a dressing room where a piano leans up against the back wall, a ‘loan’ from one of the ladies of Tulbagh, he points out his lighting and the raked seating with obvious pleasure. 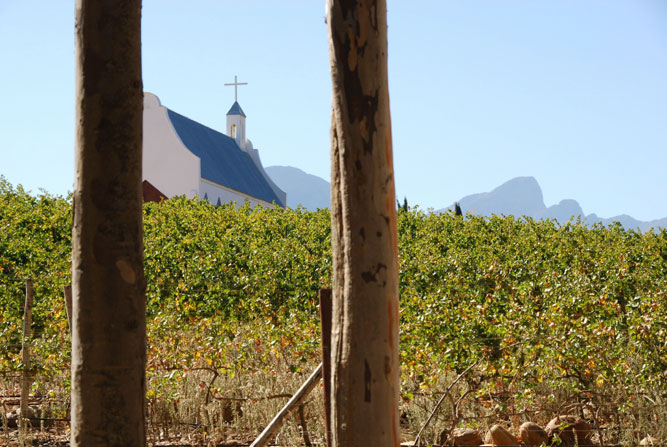 He is hoping that others follow the lead of those who already make it a habit to head out here over weekends from Cape Town to take in a show at the intimate theatre on the second floor of this lovingly restored building, followed by a meal at more than one restaurant within walking distance. And he has a more than impressive line-up that includes Koos Kombuis, Danie Niehaus, Da Capo and Sandra Prinsloo. (For bookings call Annelize on +27 (0)23 230-0707)

Tarzan shoes is anything but inviting. It sits at the start of the high street in an unimposing facebrick building and makes it a habit of inconveniently closing for an hour over lunch, but is well worth a visit if you’re after a sturdy pair of leather boots that don’t cost the earth (they’re all made next door in the factory by 60 or so local employees). And there is also a section of pretty boutique clothing that was a surprise, where you can pick up a bargain or two. (Telephone +27 (0)23 230-1083/4)

Be sure to spoil yourself and venture a little way out of town to Moniki Chocolatier. For R25 you can do a chocolate tasting, complete with coffee, tea, port or amarula. And Kimilili hand crafted farmhouse cheeses, on the R46 just outside of Tulbagh makes all of their cheeses from milk from cows they rear and feed themselves without the use of  antibiotics or any commercial dairy feed (organic in all but name and deed). 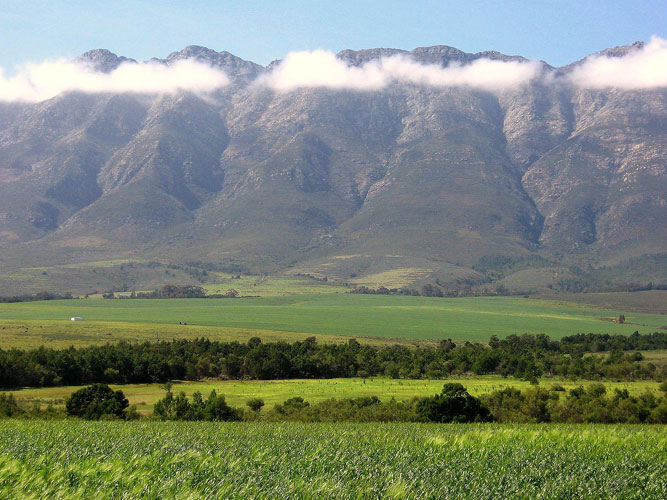 Their cheeses are matured on the farm and they produce a range of semi-soft to hard cheese types in Swiss and French cheese making styles. If you can’t visit the farm, then taste the cheeses at Padagang on Church Street. Contact Moniki chocolatier on Schoonderzicht Farm +27 (0)23 230-0673 and Kimilili +27 (0)23 231-1503.