Tourist brochures speak about Genadendal as a ‘must do’ when in Greyton. The quaint little historical village just six kilometres outside of Greyton is described as the oldest Moravian mission village on the continent, never mind South Africa, and as a village ‘frozen in the past’ with streets of gorgeously neat little thatched white-walled cottages.

This description is partly true – the carefully maintained history and buildings are beautiful. Some of them date back as far as 1738 and a visit here is definitely worth it to soak up the history of this missionary town. But what descriptions don’t include is that to reach the carefully maintained historical buildings, you have to drive through the abject poverty that is Genadendal’s outlying community. 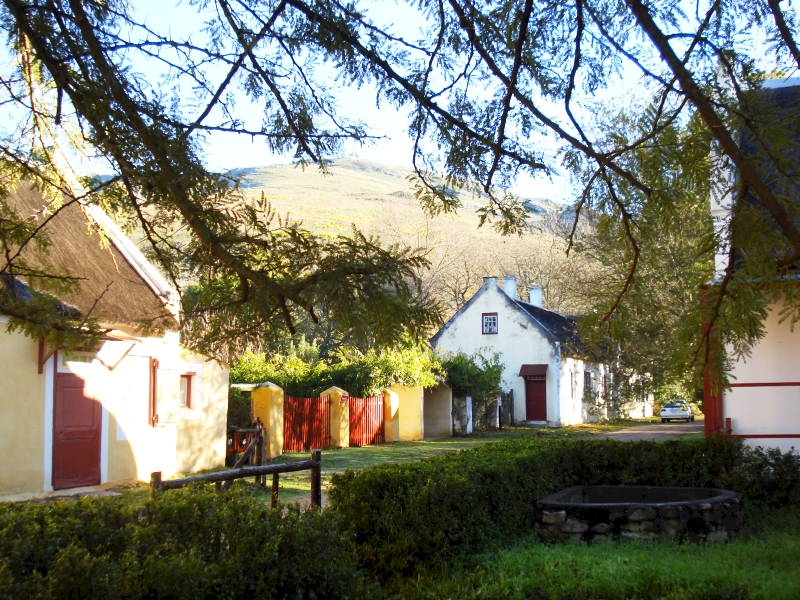 The glaring contrast between Greyton – where we had just spent a weekend in amongst the ‘mink and manure’ set of Cape Town for whom driving SUVs and landies along the roads of Greyton is high on the social agenda – and Genadendal, is more than striking. It’s darned depressing.

The contradiction is not new by any means. We’re confronted by it time and again in South Africa. But in Genadendal I found it particularly blatant because the historical village lies in the town square, in the heart of the village. One first drives through a collection of quaint, it’s true, cottages of people obviously poverty stricken and in dire need of a financial, social and educational injection.

At the centre of Genadendal are the remains of a missionary village, started by Georg Schmidt, a German missionary of the Moravian Church, an evangelical Protestant denomination, who came here to evangelise among the Khoi people so many years ago. 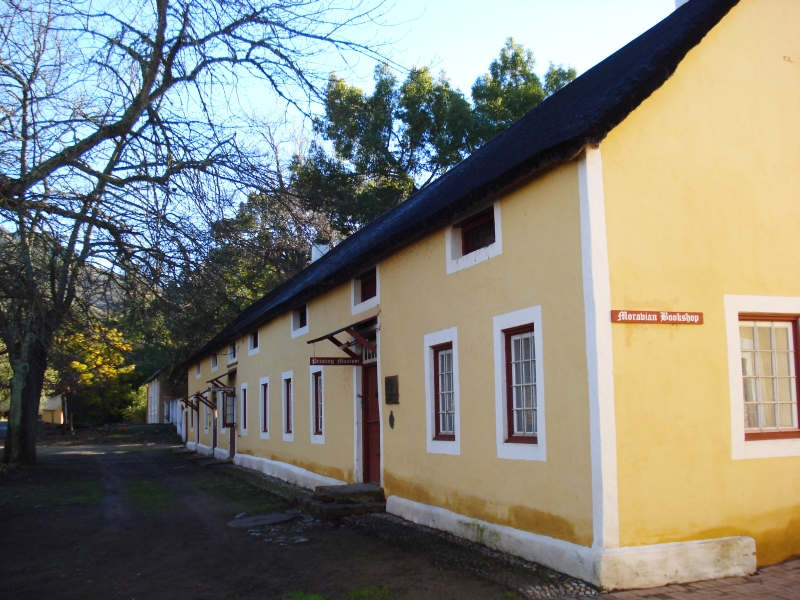 A museum filled with the most amazing collection of artefacts, the Moravian mission church with the oldest pipe organ in South Africa, a beautiful manse, a grove of oak trees (leafless at this time of year so we had to imagine how pretty it would be in summer), an operational water mill, an information area in which there are constantly new displays (the new display when we were there was of Georg Schmidt), a printing museum, an operating blacksmith, a restaurant, a group of weavers, country accommodation, a bookshop and an old bell – initially used to call people to church, and children to school – make up a beautifully relevant outdoor collection of our history.

Just inside the doorway to the mission museum, where had we had the time we would have learnt first-hand from one of Genadendal’s residents about the different artefacts, is a letter from Nelson Mandela. The letter declares presidential support for the Mission Museum’s development initiatives.

It appears that since 1991 the contents of the museum have been declared a National Cultural Treasure and Mandela renamed his official Cape Town residence, Genadendal, after the town, he was so moved by it. 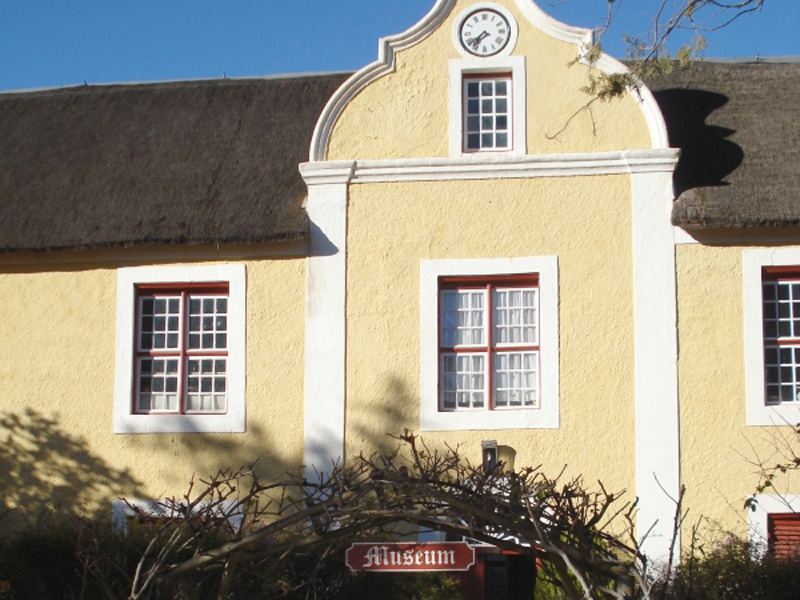 ‘Today’ (he wrote the letter in 1998) he continues, ‘ I am adding my support to efforts to restore the community to its old industrious self, through the implementation of a Living Museum Project planned by the Museum. This project plans to contribute to the economic emancipation of the town where 70% of the citizens still live under the bread line’.

A financial injection the project definitely is. It is run by and employs local residents of Genadendal. Yet despite this, things don’t seem to have changed all that much for the majority of people here.

Genadendal (Valley of Grace) has a phenomenal history, which you can read in brochures and on the internet so I shall do little more than outline the reason for my fascination. Had the town been left to its own devices, it would have flourished. Some believe enough to rival the town of Stellenbosch. This despite the fact that Georg Schmidt was thrown out of the little mission village after only seven years because the Cape Dutch Reformed clergy didn’t believe he had the right to baptise converts. 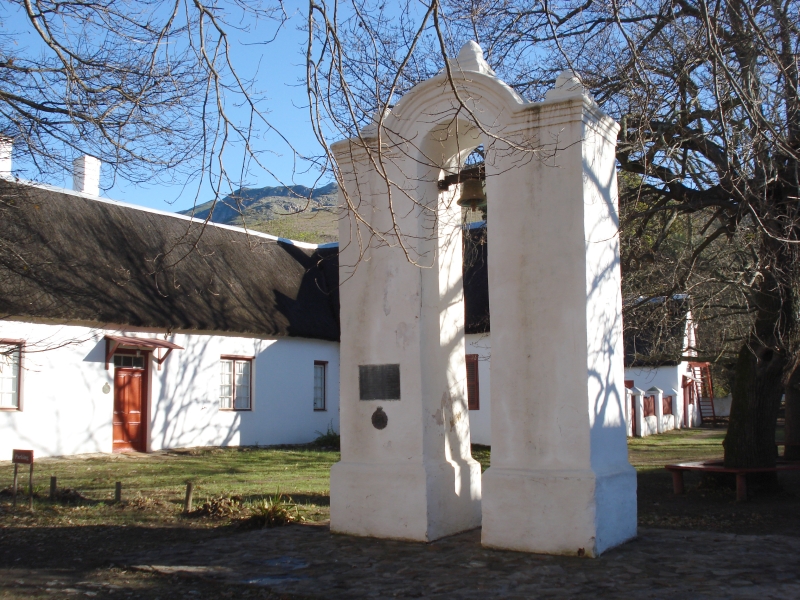 If you do the maths, over 45 years later the Moravians finally got permission to resume Schmidt’s work. The number of residents increased to such an extent that at one stage Genadendal was the largest settlement in the Cape Colony after Cape Town.

It flourished due to home industries and self-sufficient communities and became an important education centre, until the Communal Reserve Act of 1909 for Mission Stations put paid the growth because it prevented inhabitants from owning property. 1926 saw the closing of the Teachers Training College (now the museum) because ‘coloured people had no need of tertiary education’. And the rest, they say, was history.

Our arrival was on a frosty Monday morning, just before 10am, and things were only stirring in the town square. A post office worker screamed up in her delivery van, greeted what appeared to be a collection of rather official looking gentlemen who were gathering in the sunlight after a meeting, delivered her post to the Post Office on the square, and moved on. Other than that, there wasn’t much happening. At around 10.30 am, someone popped her head out of the restaurant’s barn door, and soon the smell of cooking mingled in the air. 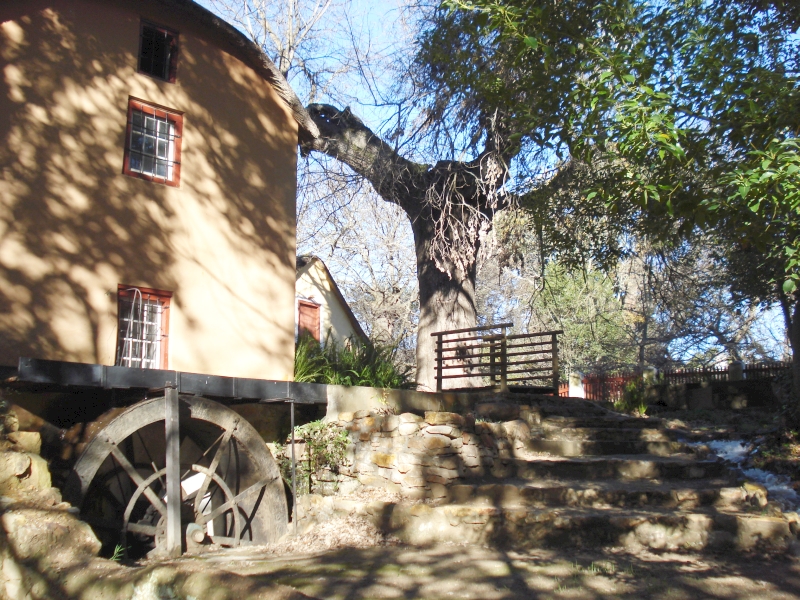 We got into conversation with the resident blacksmith, as the locals appeared reticent to engage with us. Genadendal wasn’t his home however. He rents space here as Greyton is too expensive for him to do his metal work there.

If you can, try to visit the town. I would imagine on any other day, particularly if a bus load of tourists arrive, the village would take on a life of its own and bustle with activity. The people here are proud of their history, and the beautifully preserved buildings in traditional Cape style surrounded by oak trees are really worth seeing.

There is also a well known and loved, although fairly taxing, hiking trail called the Genadendal Hiking Trail. It begins and ends in Genadendal at the historical mission church. The trail winds its way on both sides of the Riviersonderend Mountains with beautiful views.