Now reading: Wading out to Waenhuiskrans Cave – all it’s cut out to be

An almost surreal experience, a visit to Waenhuiskrans Cave is best done at low tide through the swells, along the edge of the limestone cliffs of Waenhuiskrans Nature Reserve.

Whilst some do it with their shoes on, I found walking on the barnacle covered boulders a far better idea – at least I had dry shoes at the end of it all. Well, almost, give or take a freak wave or two. 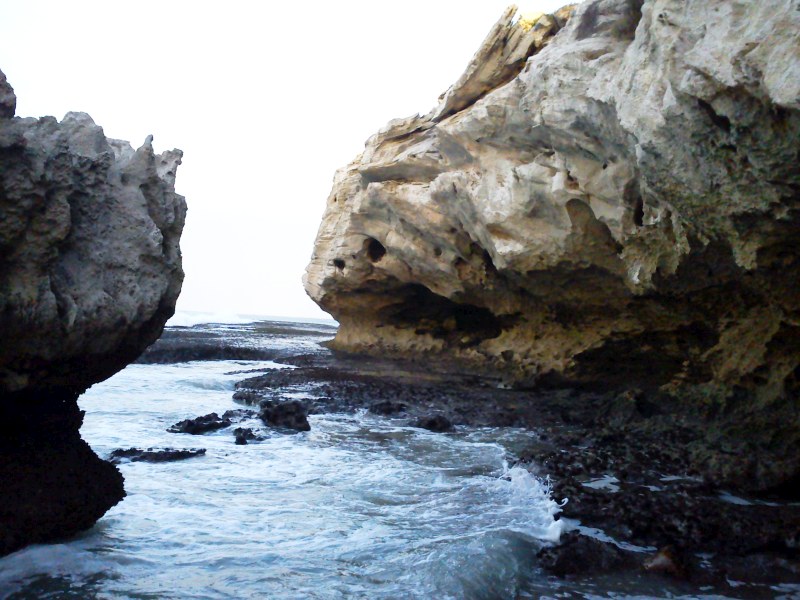 The boulders along the edge of the beautiful limestone cliffs lead to a huge cave. The cavernous space is such that those who initially discovered it named it to describe its capacity to allow for the turning of a wagon – should you manage to get your horse-drawn wagon down there (hello! Not in a month of Sundays).

Arniston is a quaint, quiet, and rather fashionable little beachside town filled with whitewashed cottages and an historical fishing village within it known as Kassiesbaai, roughly 130 kilometres up the coast from Hermanus. The cave lies south west of the town, virtually right on its perimeters, in a reserve run by Cape Nature.

There are a couple of things you should know before you do the walk (for the 1.5 kilometres it takes to reach the cave couldn’t qualify as a hike). One: you need to know when it’s low tide. Seriously, you can’t do this at high tide. You can’t actually contemplate it as you wouldn’t reach it, for one, and if you did for some obscure reason, it would be full of water. You don’t want to get caught anywhere in the vicinity come the rise of the waves. 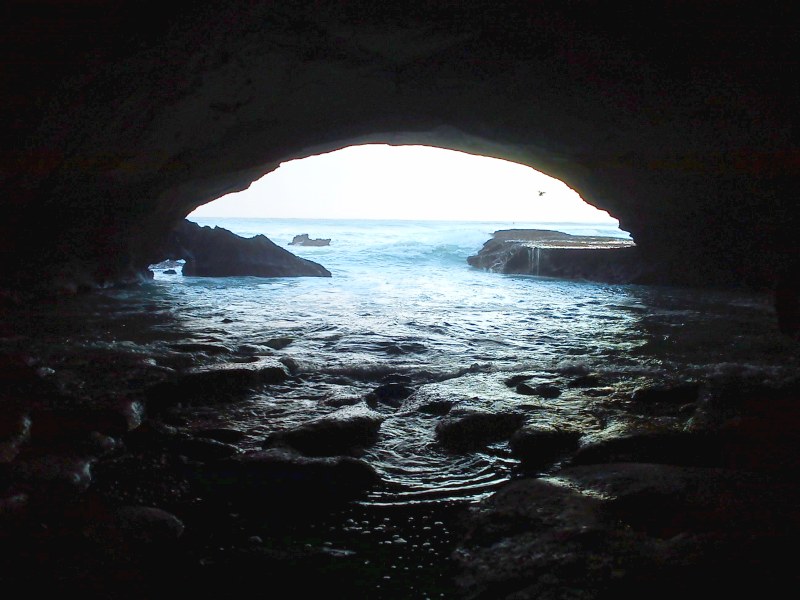 The second thing is that the sand dunes are there to look at, not to use for a joy ride. Waenhuiskrans Nature Reserve has some of the most spectacular sand dunes imagineable. In fairness, they literally beckon you. But they’re protected.

Amazingly, on our visit, the blatently obvious signs prohibiting 4X4s, offroad bikes and quad bikes over the dunes, as well as the series of poles hammered into the border of the dunes for this very reason, did nothing to stop two drivers who obviously did not understand anything about the sensitive life sustained on these dunes.

No amount of tut tutting or frowning sensibly at them on their way past me in that kind of school marm way, did anything to stop them either (funny, that). Must make a note to look more authoritative on my next visit (it might have had something to do with the lopsided hat I had on in order to stay warm).

The walk starts at the beach in Arniston and heads up over sand dunes (the ones you are allowed to walk on) for the first part of the walk. On your right are the aforementioned sand dunes – the ones that, were they not protected, would no doubt be in use for sand boarding. 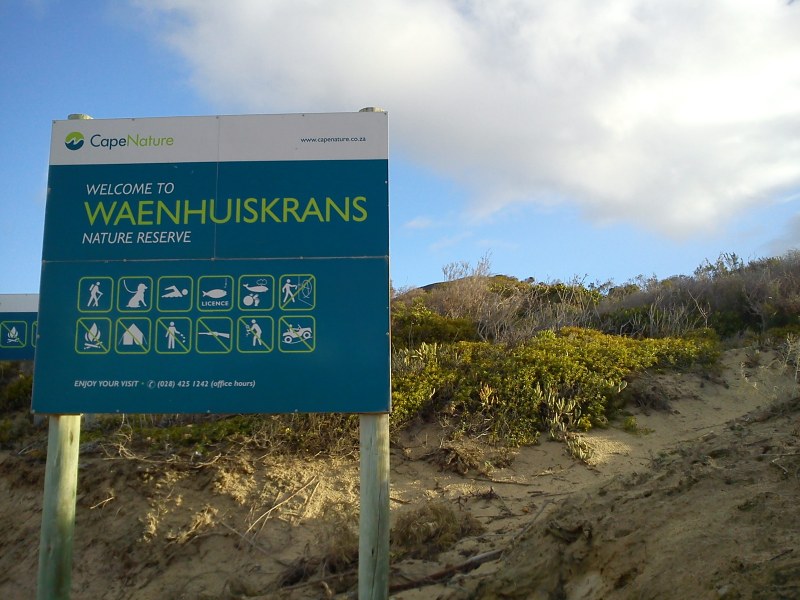 The path then veers left to the top of a cliff, from the top of which you begin to be aware of people preparing to come and go from the beach below. There are a series of hewn steps to the right of this, which aren’t immediately obvious, and so people have begun to simply descend straight down over the rocks, causing further erosion.

It’s only on the beach, or should I say boulders, below that one becomes more aware of just what getting to the cave entails. We weren’t all that sure at this stage whether we’d made the low tide as to my mind the waves still looked pretty hairy. I thought we’d simply wade out over soft sand to the cave. But actually you walk over a series of barnacled rocks, whilst tentatively balancing using your hands on the rough cliff face, to the cave, which is just round the headland.

Whilst deciding whether or not to attempt the trip, we munched our way through a couple of apples and watched. Most of the people, knee deep in water, made it all look pretty easy. Apart from the fact that taking off your shoes and wading through rather icy water, when it was already drizzling and chilly out, appeared obligatory, there didn’t seem much to it. The secret was not to hesitate. When granny began taking off her shoes, I decided to stop being such a wet blanket and get going. 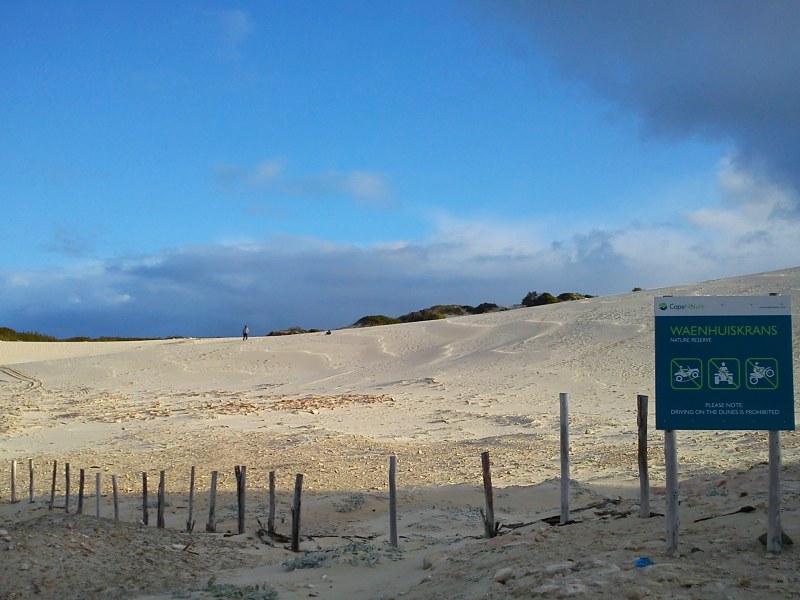 Hoisting our shoes into a couple of rucksacks we set off. Preventing my five-year old from flinging himself bodily into the waves took some doing, but he soon got the hang of rock jumping and holding mommy’s restraining hand and managed beautifully.

Every now and again a rather daunting looking wave swept in to remind us that the tide was on its way (in or out, I still don’t know), but we were across to the cave in minutes. From here we crouched our way beneath the initial overhang, through a rather tight opening, into the huge cave beyond.

And that is where you stand spellbound, for at least a minute. The cave is incredible. It is huge, with a rather low ceiling (although everyone can easily stand). And the whole thing has obviously been hewn over time by the motion of the water swilling in here at high tide. With the hole behind you, the mouth of the cave is before you; the crashing waves of the sea breaking over rocks just outside. 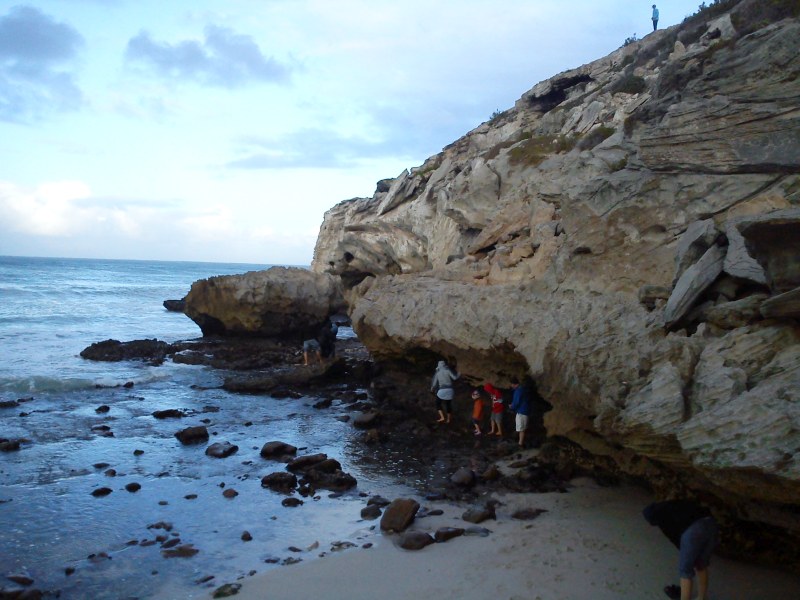 Someone has suggested this would be a wonderful space in which to meditate, and I agree wholeheartedly, but for the constant stream of people. One wouldn’t  have a minute here to oneself. Not that one minds. Somehow the whole experience is intensified for having shared it with others. I found myself grinning ridiculously at everyone else and exclaiming at its beauty. So, I’m branded a nutter, there are worse things.

Others were more prepared than we were. They arrived with sundowners in a cooler box. Althought I’m not that sure that the cave was the ideal spot for them. It’s pretty damp inside and there are numerous little pools filled with water.

Safely back on the beach, having come back the way we crossed, we sought a couple of boulders far enough from the waves to be able to safely put our shoes back on. Or so we thought.

For out of nowhere a freak wave swept up and had us drenched in seconds, despite our best efforts. The freaky part of this experience is that both my husband and I registered the wave off in the distance. Both had more or less the same thought – something about tsunami – and as we took a breath to share this, found ourselves emersed in water. That’s how quick it was.

The moral of the story, aside from the amazingly synchronistic thought that wouldn’t have saved us even had we moved earlier, is that the sea is not only unpredictable, but it gives no account of itself and leaves little time to react. That nature is beyond our control became that much more valid for me (I know, it was only a little wave, but just imagine if…).