Yes, Hermanus is a wonderful place to go and view the whales. That is, if you don’t mind sharing it with thousands of other people, a whale festival or two, and fun fair rides right on the edge of the cliff overlooking the bay where the whales come to calve.

It is true that you can’t beat the town’s accessibility – it is really close to Cape Town – and as far as land-based whale viewing goes, it is undeniably one of the best. But I can’t help thinking that the whales want a little more peace and quiet when they’re here to mate and calve. 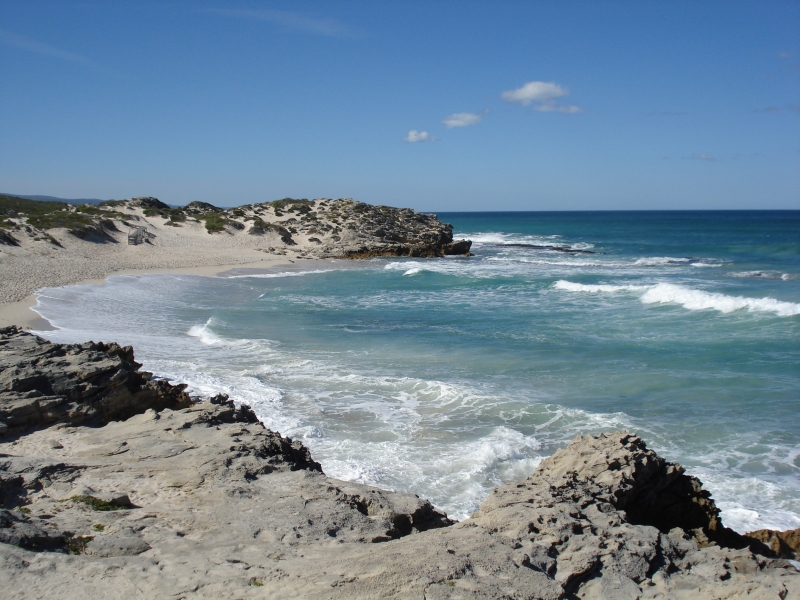 And for that reason De Hoop Nature Reserve must be one of the most beautiful places to see the Southern Right Whale. The reserve is a 36 000 hectare conservation area on the Whale Trail that is also part of a World Heritage Site. And it is only three hour’s drive from Cape Town. And a beautiful drive, peppered with gorgeous scenery and at least four farmstalls.

But what you might not know is that De Hoop, just south of the Breede River mouth, also has a 19 kilometre vlei that is a Ramsar site (an area of wetland designated as having international importance). And that the reserve extends three nautical miles (roughly five kilometres) beyond the shoreline (that is 23 000 hectares) making it one of the best whale viewing sites in South Africa. It is also one of the most important calving grounds and nursery areas.

There is a five-day whale hiking trail developed by Cape Nature at the reserve. It is 55 kilometres in entirety from Potberg to Koppie Alleen, and includes five overnight stops, but you need to organise it yourself. I can promise that it will be worth it. Don’t wait as I believe it is extremely popular. 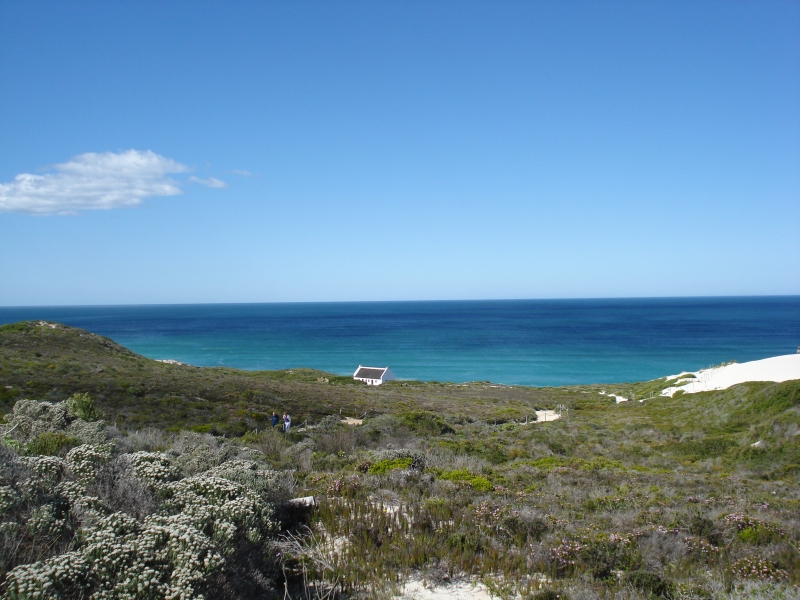 We arrived to see the whales at De Hoop at around midday at Koppie Alleen’s parking area, already busy with at least one bus load of visitors.

Having already spent a night in the reserve, we were in ‘time out’ mode and happily slowed enough that nothing could worry us, least of all a bus load of visitors. Most of them were already making their way back to the bus anyway, and one poor dear, who was allergic to sand, had remained the entire time in the bus.

My four-year old son was very eager to see the De Hoop whales. He rushed on ahead on the pathway down to the cliff edge, where wonderful wooden walkways have been built not just to make it easy to reach some of the viewing points, but also to protect the vegetation and the whales from intrusion.

At about this time we discover that we’ve left the binoculars back at the cottage. Typical. With much muttering about our inability to organise a —-up in a brewery, we decide to press on regardless, and if we really manage not to see anything without them, one of us will return to fetch them.

We needn’t have worried. Whales come within 100 metres of the shore here and whilst a pair of binoculars would undoubtedly have improved our vision, one can easily sight the whales without them. And whales there were. Immediately close to the shore were at least four females with their calves passing across the bay – easily visible to us.

In fact we saw so many whales that we became rather blasé about it all.  They were to return coming back the other way again roughly an hour later – or at least I think it was them; it is hard to tell. 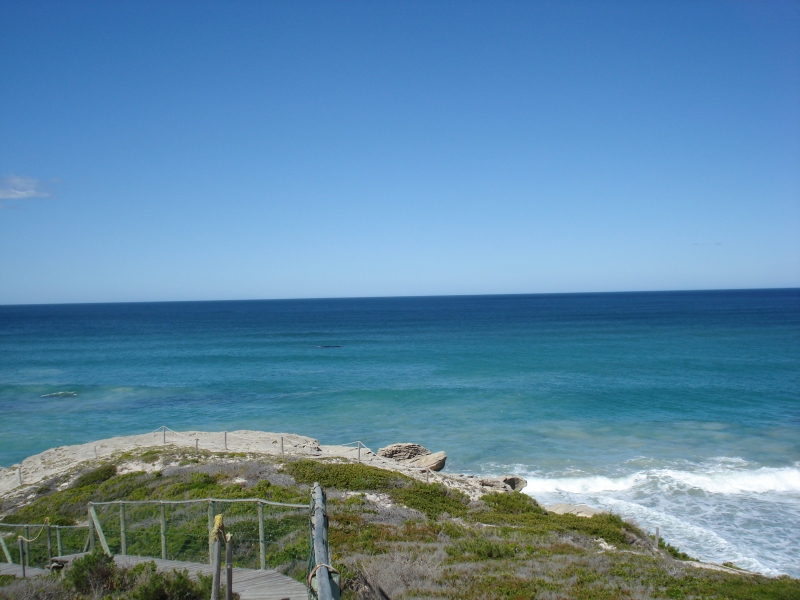 Further out, there were more whales still – visible because every now and again they would spew water from their blowholes. And we got to see the entire gambit of whale behaviour. There was a lot of rolling around happening just off the shore, which was either playful moms with tots (though a four-ton calf hardly qualifies as a ‘tot’ does it?), or mating – it was hard to distinguish without those binoculars – whilst further out we were entertained to lobtailing and sailing.

The sailing (standing on their head with tails out of the water) was utterly bewildering. I kept waiting for them to go down but they stay suspended like this for at least ten minutes. Science says that they’re using the wind to push their bodies through the water or cooling, but I have a secret feeling that they’re just plain showing off for the fun of it – I don’t know, do you need a reason to stand on your head?

Whales come to our shores to mate and breed every year. The females produce an offspring once every three years. The calf takes a year to gestate, and then suckles for six months – apparently a calf drinks up to 200 litres of milk a day, and grows three centimetres in a day, so you can understand that a female needs to recover from this ordeal, which explains the three-year cycle.

It was quite funny to swop notes with an elderly couple making their way back from the beach as we arrived. The woman, rather indignant at the male whales ‘lying in wait’, as far as she was concerned, for the females, reckoned they would be re-inseminated on their way out of the bay, having just given birth. I was relieved the learn that this was not quite the case. 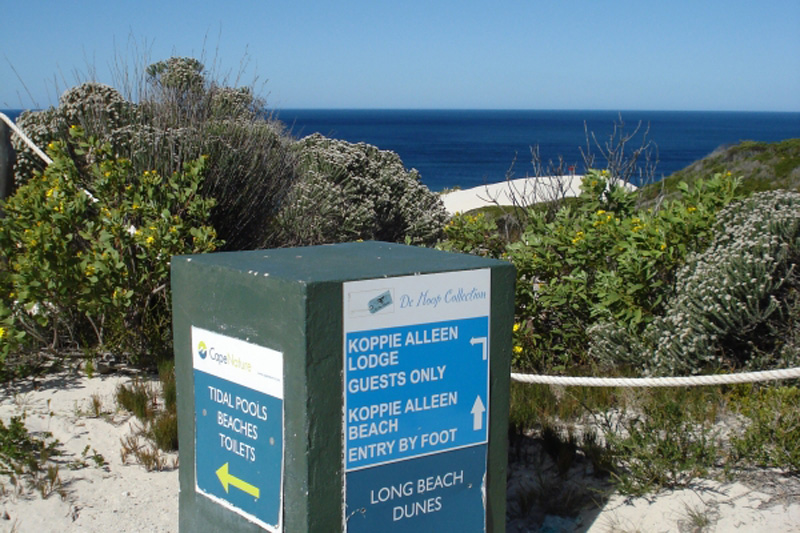 Once down the wooden walkways that lead to the sea, there is a little beach alcove to which we headed and collapsed in a heap, whilst our progeny was happy to race through the waves and collect shells.

From our vantage point beached as we were on the sloping sands, we could happily watch the whales passing to and fro, whilst a seal played happily where the waves broke onto the shore, for what must have been at least an hour. What an incredible display of complete surrender on his part. That was one happy seal.

We had the place virtually to ourselves, even though this was a weekend in August when the whales are at their peak in the bay. We shared it only with a few oyster catchers, who were none too amused when our son innocently got too close whilst trying to find cuttle fish, and a few other visitors who strolled across the sand en route to other parts of the bay like Vaalkrans and Lekkerwater.

The wild, brilliantly blue, sheltered bay at De Hoop is whale watching at its best.