You are here / South Africa Travel News / Destinations / Western Cape / Where to Lunch in De Rust, and Why it’s Worth a Visit

Now reading: Where to Lunch in De Rust, and Why it’s Worth a Visit

We don’t mean to stop in De Rust. We’re on the N12 that heads off the N1 close to the Karoo National Park en route to Ladismith, our intended destination, and have just come through the incredible Meiringspoort, when De Rust appears out of nowhere.

The main road through town is littered with colourful restaurants, coffee shops and the odd boutique. The place is hot and humming. And a big board informs us that De Rust has won ‘dorp van die jaar’ and claims to be the best town in the Karoo. 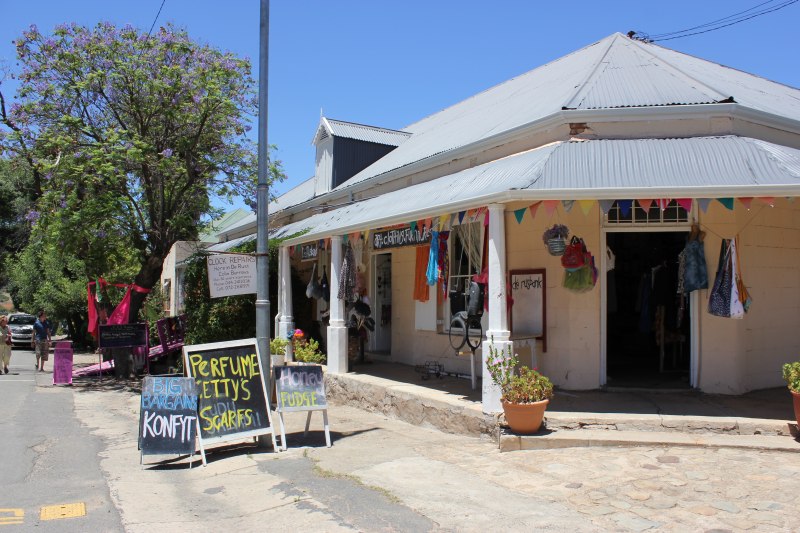 Besides, we’re hot and hungry. And with all the jolly jostling for attention that each of the establishments makes in a bid to get you to stop at their restaurant (they’re rather colourful), the town deserves exploration.

The towns we’ve passed through, the heat of the Karoo and the incredible towering sandstone cliffs of Meiringspoort have all reminded me of author Ettienne van Heerden’s The Long Silence of Mario Salviati (if there’s one book that to me epitomises the Karoo, then it’s this one, although the original, is of course, Die Swye van Mario Salviati).

Where to Lunch in De Rust, and Why it’s Worth a Visit

Meiringspoort is De Rust’s major drawcard. One is compelled to stop in town after passing through the kloof from the north, just to catch your breath. The sheer magnitude of the cliffs brings home sharply the arduous taks faced by farmers from the north to get their ox wagons through here, in an attempt to trade with Mossel Bay, George and Oudtshoorn. 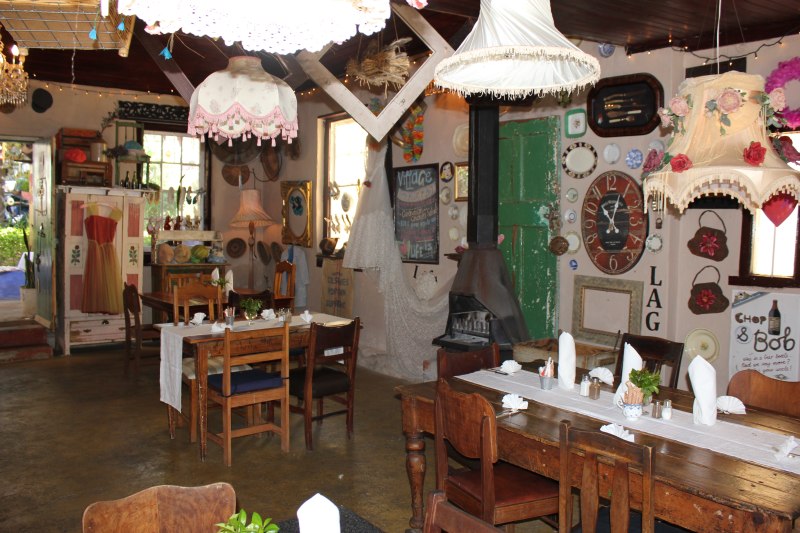 Even today, if the road that was built finally only between 1920 and 1923 floods, which it is prone to do, trucks have to travel via Graaff-Reinet and Uniondale along the R62, or along the N1 to Laingsburg, branching off to Riversdale or Oudtshoorn, to arrive finally in George – both tedious and rigorous detours.

De Rust markets itself as a gateway to both the Great and Little Karoos. Its location is enviable, snuggled in amongst the Swartberg and Kammanassie Mountains. It’s one of the few towns that isn’t flat. Its tree-lined streets slope up and away from the entrance to Meiringspoort, and there is evidence that more than a few of the little Karoo houses have been spruced up and made pretty.

Around De Rust there are green valleys, incredibly rock formations, streams, an enviable bird life and walking and cycling trails to keep you busy for more than a couple of days. It’s perfect as a place to lunch, but the town is also out to prove that it will hold your attention for a little while longer. 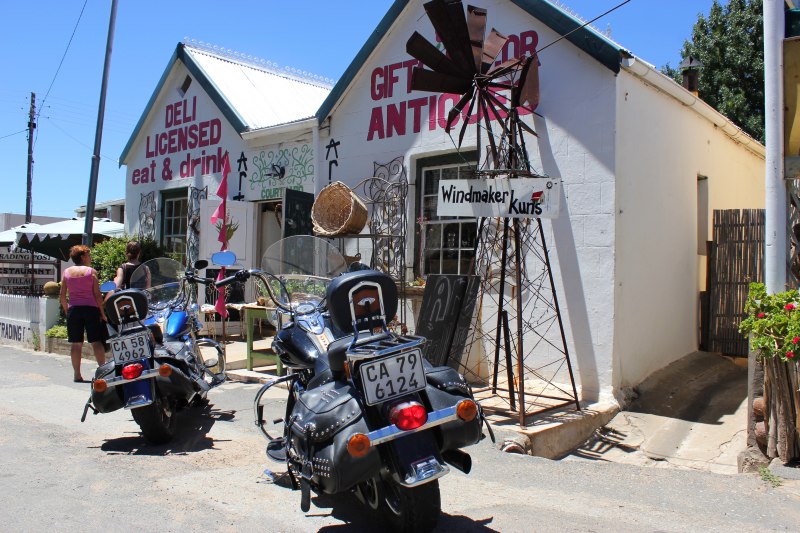 We finally settle on lunch at the Village Trading Post. From the road its exterior invites you to explore, while over the doorway there is the word ‘courtyard’ surrounded by swirling green curlicues, which suggest a cool veranda off the back somewhere. The mood is further endorsed by a couple of Harleys outside, and a dilapidated windmill on which is pegged the sign: ‘windmaker kuns’.

We’re not disappointed. Inside is an eclectic mix of things. Antique clothes, light shades donned with scarves and roses, furniture, a plethora of hearts, handbags, clocks and a selection of hats over the doorway catch your eye as you pass through the old house and out of a doorway into the courtyard, where there is also an art gallery.

We manage to find a perfect little nook up above the courtyard, next to the gallery, in amongst the leaves of a fig tree and a giant umbrella, its branches draped with glass bottles filled with pink liquid and wind chimes, the walls gently embroidered with painted climbing roses and the words of Ingrid Jonker – “…weerlose roos van die môre . wond van die rose…”

Afrikaans Karoo nostalgia as only the Karoo towns can do… 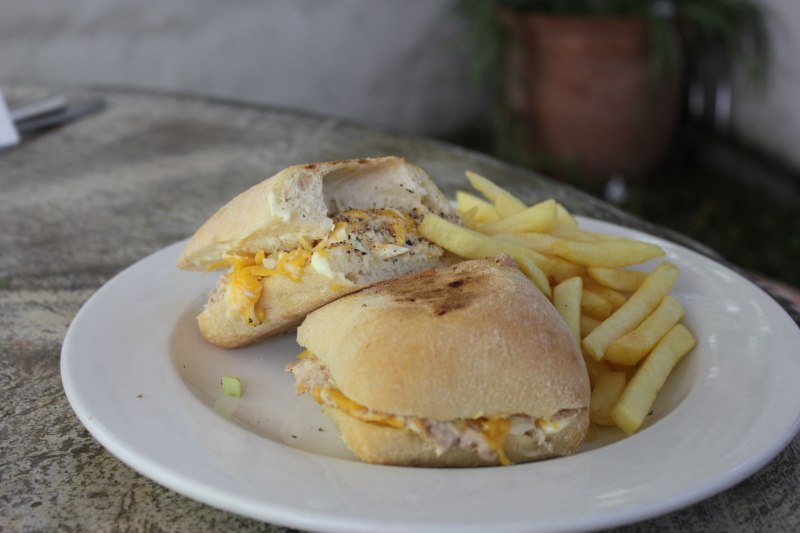 There isn’t a hint of a breeze and we’re grateful for the glass jug of iced water the waitress brings us. It’s thoughtful. She could have simply slapped down three glasses filled with tepid tap water, as many restaurants do when you don’t order a drink but request the freebie instead. Besides, I’ve spotted the water filter system similar to ours attached to the pump that brings water to the house.

Our food, when it comes, is also pleasantly refreshing, and not without artistry. The menu includes all day breakfasts, omelettes, salads, open sandwiches on home baked bread or ciabatta, toasted sandwiches, and ‘magic meals’ that include spaghetti ‘bolle’ naise served with tomato relish, and the village Trading Post’s burger (their speciality).

There is also a good selection of local wines from Van Loveren, Hermanuspietersfontein, Bergwater and Rooiberg cellars. Part way through our meal, the Harleys are heard starting up and vrooming off.

At the gallery I become entranced by a painting. It isn’t often I’m hooked. I’m not an art connoisseur, neither am I offay with South African art, but this beautiful modern and bright work with a swirling, almost green river that runs up towards a vivid farmhouse has me walking in muttering circles, wondering if I dare part with R4500 of my savings. 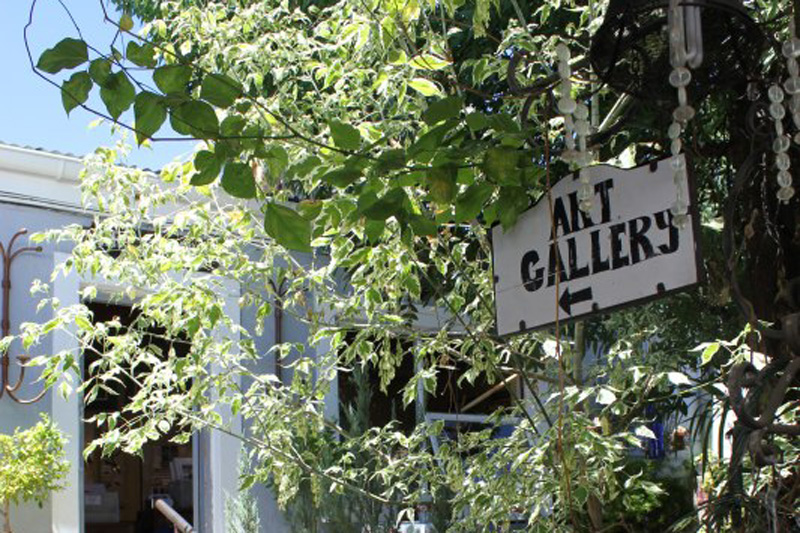 The heat and the added pressure of having to continue our journey abate my dilemma, but I still think about it. Often. I even have the gallery’s card, delivered into my hands together with a little feather, lost somewhere in the bottom of my handbag. I think.

Things to do when in De Rust