Lying at the foot of the Helderberg is a large nature reserve. But this mountain does not stand alone. When one takes in the vista from the reserve, you are practically surrounded by mountains – testimony to the fact that the Helderberg Nature Reserve lies enshrouded by the Hottentots Holland Nature Reserve and its incredible range of mountains. Both of these reserves can be found in the north western reaches of Somerset West.

The Helderberg Nature Reserve, accessible via Verster Avenue off Reservoir Road, is a perfect space for picnics. Just after entering the gate of the reserve (you’ll pay a R10 entrance fee per head) you’ll see the start of picnic blankets and baskets as they litter the large expanse of lawn, and a jungle gym in the upper reaches.

In summer, I’ll wager the place is packed. Even on this, a sunny winter’s morn, families with children are gathered here in fair numbers. 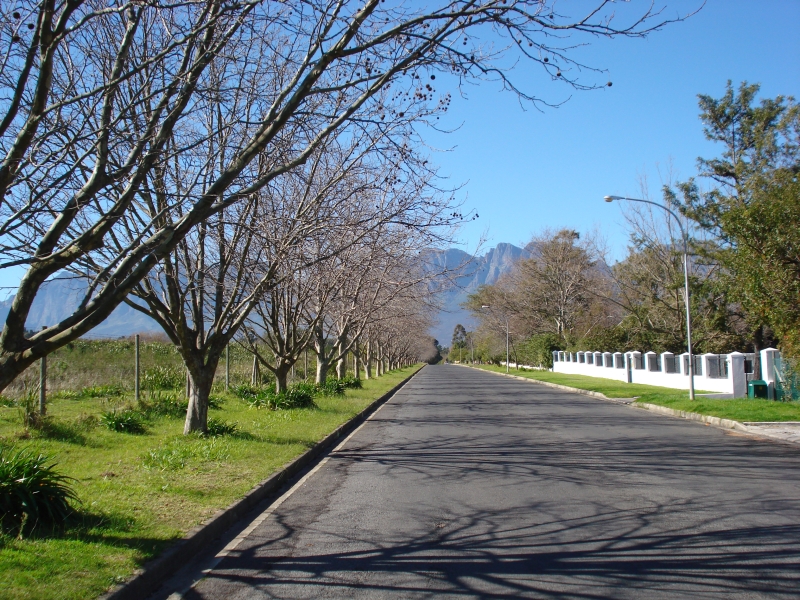 Amazing how one’s needs are subjected to those of one’s child, or perhaps you haven’t experienced this particular parental hazard? Picnics for me are usually in fairly remote parts of picnic areas, nestled beneath a tree away from the hordes. Not our picnic at Helderberg.

By the time we arrived, having stopped to pick up a selection of picnic fare en route, we were starving, and one look at the jungle gym meant we had no choice but to sit close enough to monitor the comings and goings of children – further away would not suffice.

Picnic finally unpacked and the sun on our backs, we sat alternatively watching other picnickers, or listening to the shouts of children on swings. Not too bad. I can do the parent thing, as long as I get to eat my food in relative peace. And the trees and grassy area, peppered with the first inkling of spring flowers – little pink numbers that raised their heads barely higher than the level of the grass in which they grow – was beautiful.

Next to the jungle gym, which finally got our undivided attention after our meal, runs a gurgling stream and birds constantly dip and dive overhead. Tree climbing then became a more attractive venture than the jungle gym, which is chiefly aimed at younger toddlers, and we began to gather together our food as our main aim was to wander the paths of Helderberg. 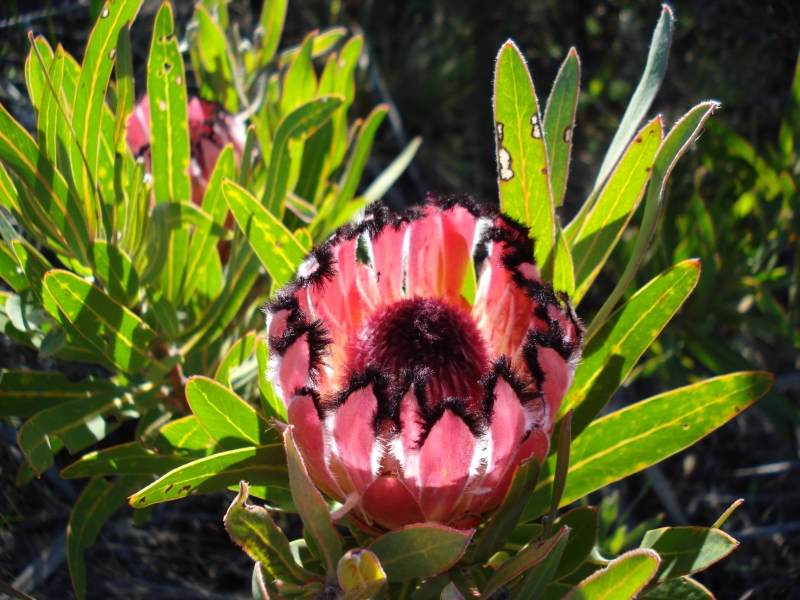 There are seven walking trails in the reserve, each of them given a different colour and imaginatively called the yellow, black, blue, red, green, pink and brown trails. They range from the yellow 2.2 kilometre walk, which takes you roughly 35 minutes to complete, to the pink route, which leads you right out of the reserve to the west peak and dome via what’s known as the porcupine buttress.

This walk is around 13 kilometres in length (my calculation, so don’t quote me) and encompasses the yellow, blue, red and green trails as each builds on the next as they head up the mountain. It doesn’t take a fool to work out that the yellow trail is probably your best bet when you have but a couple of hours left of sunshine and a child in tow.

The gates to the reserve open as early as 7.30am and in summer it is definitely a good idea to walk early, but in winter, you can quite happily set out at what ever time, bearing in mind that the sun takes a dip behind the mountains pretty early in the afternoon and the chill sets in.

Head through the stone arches with the restaurant to your left, and you’ll see a number of alternative paths you can take. The yellow is quite clearly marked. What soon became apparent though, is that this whole section of the reserve closest to the parking area, is littered with numerous paths that interweave and cross one another constantly.

What looks like a straight forward path on the Walking Paths pamphlet you can pick up in the Visitor’s centre, soon becomes a bit of a shambles or a maze of adventure, depending how you wish to view it. 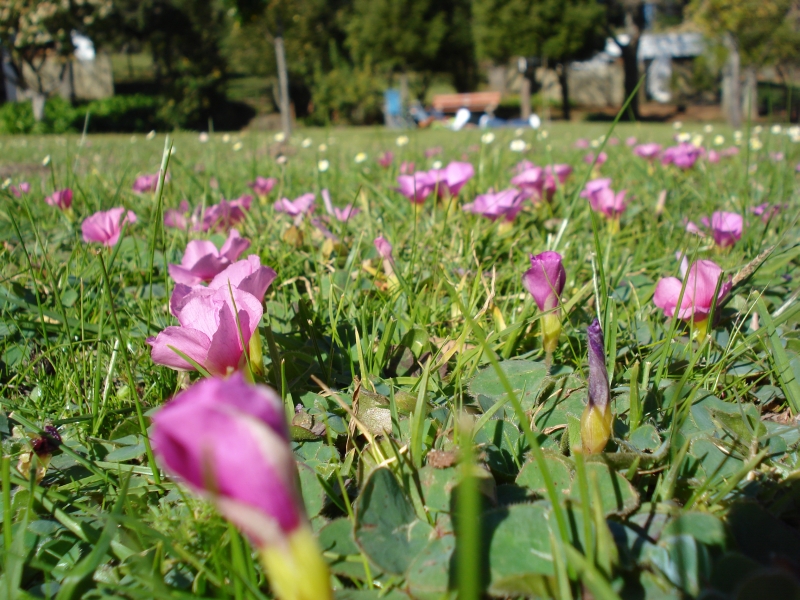 Actually, I think we stumbled off the yellow path relatively early on. On reading other hikers’ accounts it would appear that the walk is really well signposted with little wooden signboards marked with a yellow footprint. We weren’t watching the path well enough, obviously. Nonetheless, our walk was wonderful.

The Helderberg Nature Reserve is a mass of vigorous fynbos and indigenous flora. Proteas at this time of year feature heavily and, with photo time, the walk took us about an hour as I kept stopping to capture the beauty of proteas and ericas, some of which towered above me. And the views out over mountains were equally breathtaking.

Almost instantly we were in the reserve proper, and away from the excited shouts of children and the manicured lawns of the picnic area. I felt liberated. Being out in nature in this way immediately reawakens in one the joy of life. All of us feel this to some degree. Which is why walks like this are so popular, and why we seek outdoor venues like this nature reserve.

Whilst we didn’t get to spot any of the reserve’s duikers, brontebok and steenbok  (not surprisingly given that children make a fair bit of noise), we did see countless numbers of birds, gentle water pools, the odd water bird and enjoyed time out in the fynbos. 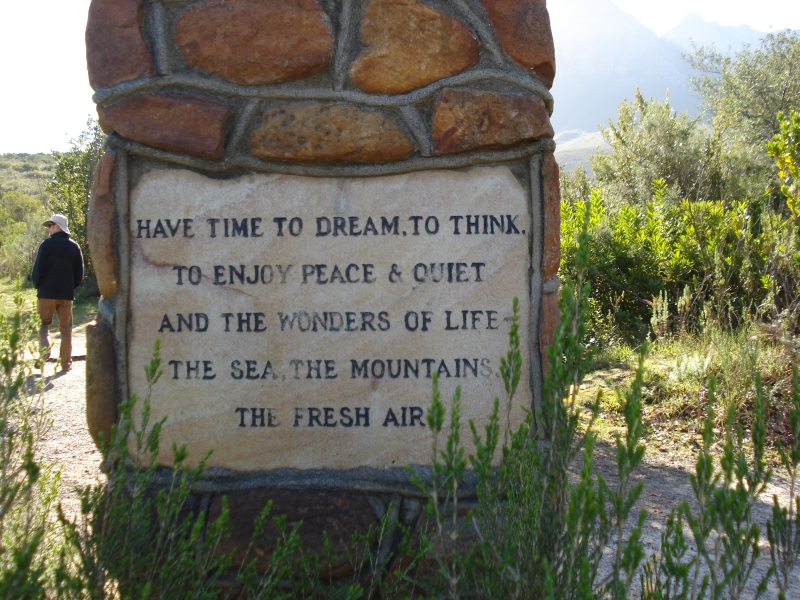 ‘Have time to dream. To think. To enjoy peace and quiet and the wonders of life – the sea, the mountains, the fresh air.’ – quote at the entrance to the walks. 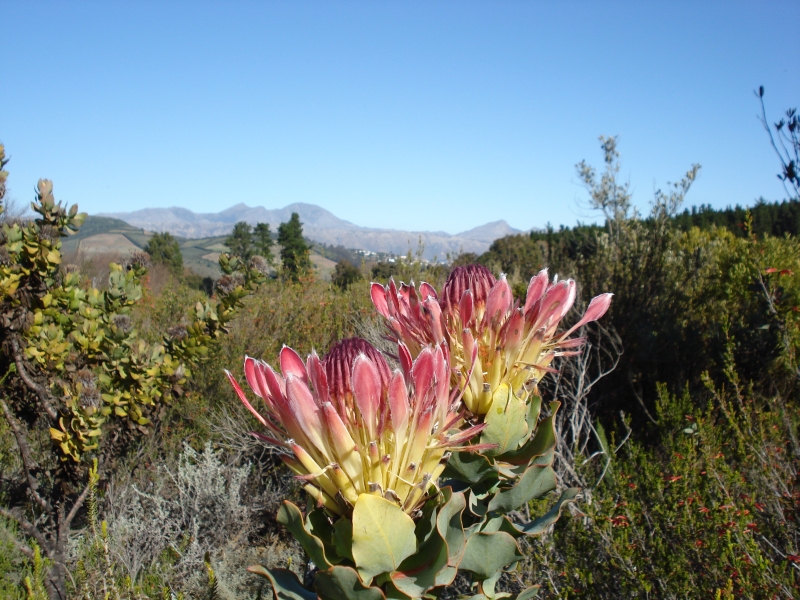 10 Short Beginner Hikes In Cape Town – Perfect For The (Relatively) Unfit, Or Those With Children

Most of the hikes in Cape Town involve scaling a mountain (if you hadn't already noticed, there are a fair number in the city). If Tranquillity Cracks, Platteklip Gorge, Maclear's Beacon and India Venster are not on your list of must-do hikes, then this list o...

8 Glorious Gardens That Just Happen To Be On Wine Estates

To explore a garden before, or after, tasting the wine grown on the farm is one of the highlights of these 8 glorious gardens on wine estates... BABYLONSTOREN The gardens at Babylonstoren are extensive. Modelled on the former Company Gardens of the Cape (the...