You are here / South Africa Travel News / Ten (10) to Inspire / On Safari in Cape Town? Yes You Can

Now reading: On Safari in Cape Town? Yes You Can

On Safari in Cape Town ~ Yes You Can!

The Western Cape game reserves are, admittedly, not the jewel in the crown of the province more famous for its vineyards, mountains, seascapes, whale watching and Cape Dutch architecture.

But game reserves there are, and by no means a mere handful, in the Western Cape.

What’s great about these Western Cape game lodges, versus those wildlife reserves in other provinces, is that they play on their strong points, focusing largely on the beauty of the environment, and the animals from the area.

So, few of them have ‘imported’ the Big 5 choosing instead to centre on antelope, elephants or smaller, lesser-known indigenous creatures.

For those after a  Big 5 game reserve experience or a Safari in Cape Town (or as close to as possible!) the Western Cape does rise to the occasion – so keep scrolling!

On Safari in Cape Town ~ Yes You Can! Visit these Western Cape game lodges …

You’re going to drool when you catch a glimpse of the cliff-side bedrooms on offer at Kagga Kamma Nature Reserve in the Cederberg.

The reserve’s signature cave suites come second only to the open air room – a bed on a remote rocky outcrop far from both the lodge and civilisation; your companions the stars and a fire. Wow, we know where we’d spend our wedding night… 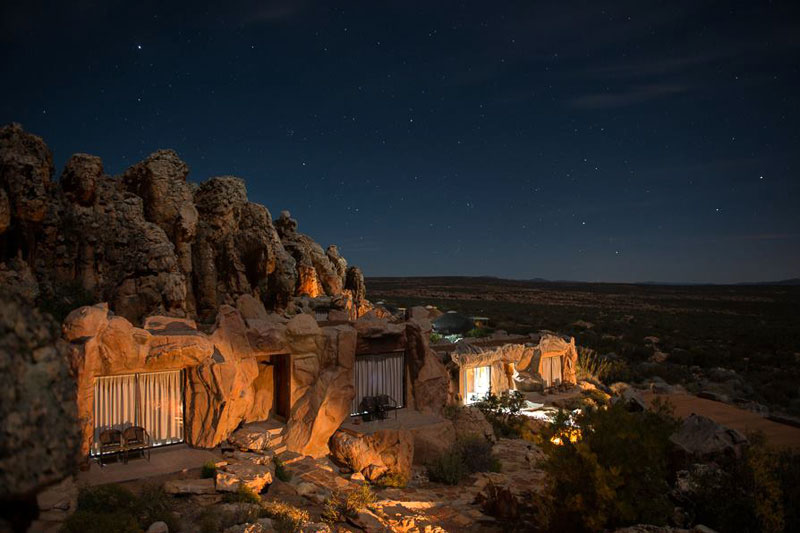 Indalu is an 800 hectare elephant sanctuary only 3.5 hours’ drive from Cape Town. If elephants are what you want to experience (up close and personal), then this bushveld Garden Route game reserve with its emphasis on open vehicle and walking safaris is perfect.

Indalu is small and intimate, with only two two-bedroom lodges and the chance to experience two of the Big 5 as well as antelope. 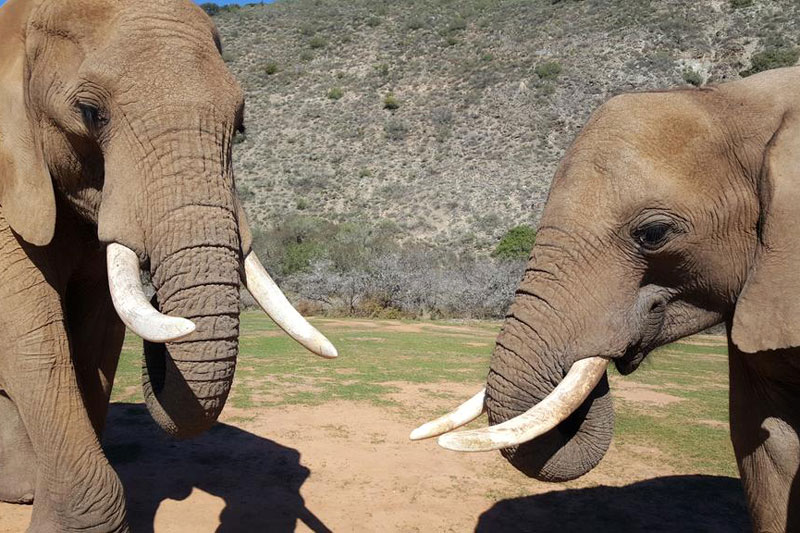 The Garden Route’s Gondwana Big 5 game reserve is named for the supercontinent that existed about 550 million years ago. Inherent in the name is the idea that we are returned ‘to nature’s perfect playground’ in this luxury reserve. 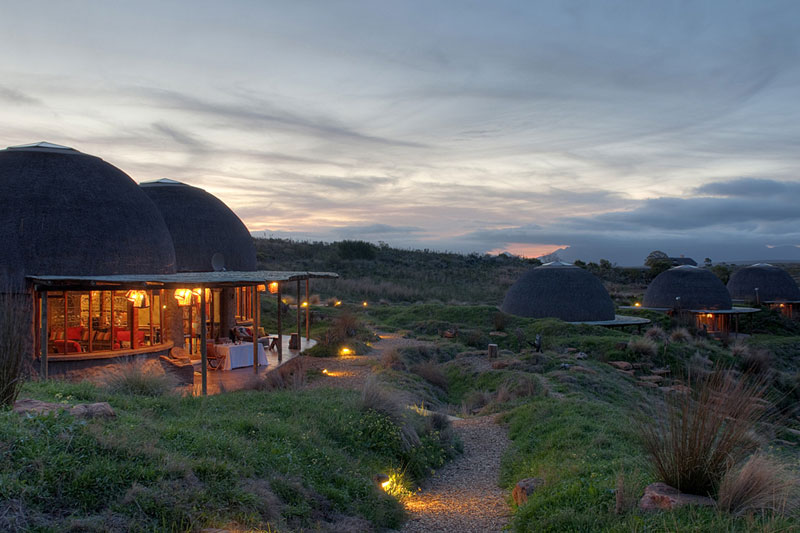 This farm-the-size-of-Manhattan with its farmhouse in the shadow of the Rooiberg Mountains is in the middle of the Klein Karoo (near Ladismith) with your own private ranger and chef (fond of African fusion dishes) available to hire.

Or book a full-board suite (there are only three). The farm has over 50 species of wildlife, birds and other animals, including the black eagle and blue crane. 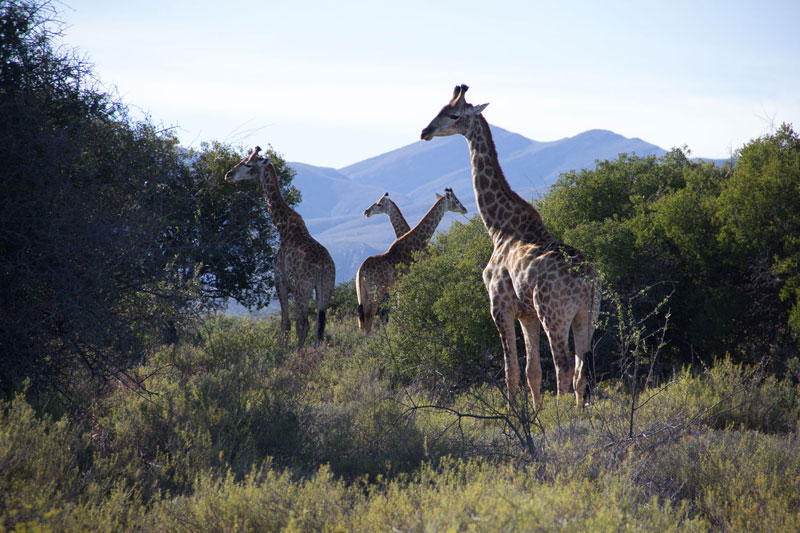 This private game reserve just outside Oudtshoorn in the Karoo offers a five suite lodge that has become a landmark with nature lovers. 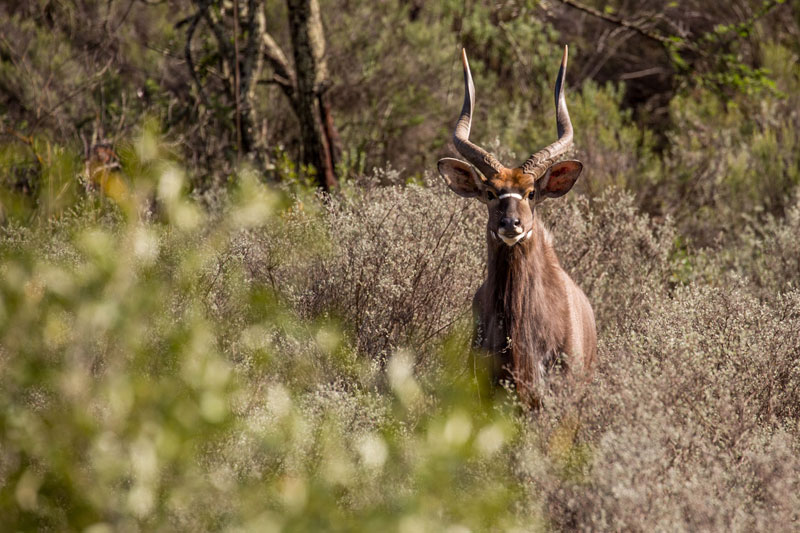 Sanbona lies just off Route 62 in the Klein Karoo at the foot of the Warmwaterberg Mountains, a series of sculpted Cape Fold Mountains that, combined with the wide-open Karoo vistas, San rock art, nature walks and Big 5 wildlife, make this wildlife reserve difficult to pass over.

The stillness and raw beauty is unique, as is the chance to see white lions. Choose from the Dwyka tented lodge on a horseshoe dry river bed, Gondwana Lodge (great for kids) or Tilney Manor. 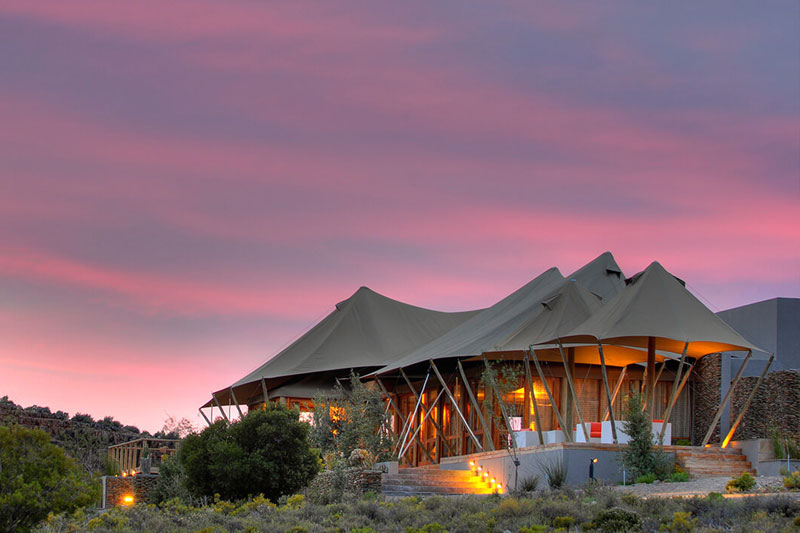 Ko-Ka Tsara (small bucks kloof) lies in the heart of the Nuweveld Mountains in the Great Karoo just outside the town of Beaufort West. It’s an intimate seven chalet bush camp built from local poplars and stone with slate floors, handmade furniture and wood finishes on a private game reserve, 10 000 hectares of which protect the mountain zebra and bontebok.

Roaming the plains are also a range of antelope, aardwolf and wildebeest, and at night you’ll hear jackals calling. 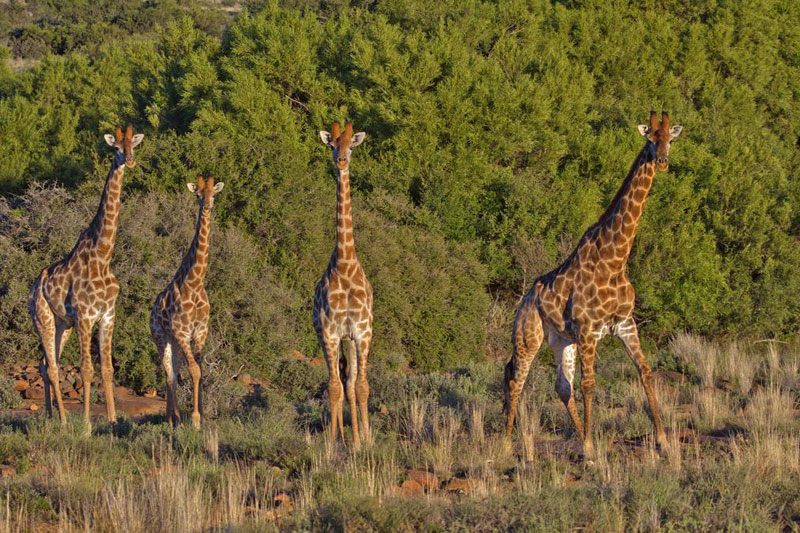 See four of Africa’s Big 5 (rhino, buffalo, lion and leopard) on open land rover game drives or horseback safari on this private game reserve with a ten suite lodge on the Garden Route.

Stay in a rustic family lodge and family units and breath in the beauty of the surrounds. Get a feel of the spirit of Africa. 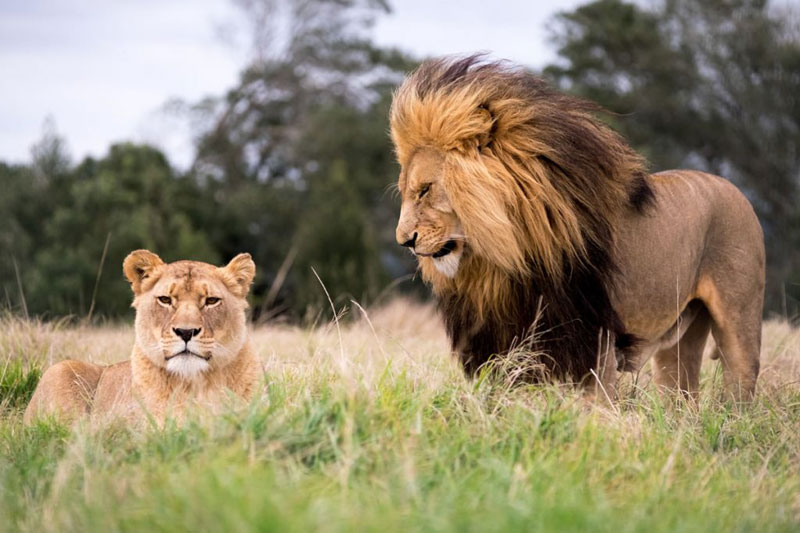 This Big 5 lodge lies with the Langeberg Mountains as its backdrop and is popular, particularly, with families for the children’s programme and reptile centre.

Once a degraded farm the Garden Route Game Lodge is now a well-stocked game farm rehabilitated and restored and capable of supporting a large variety of wildlife. Choose from a selection of lodge rooms or bush chalets. 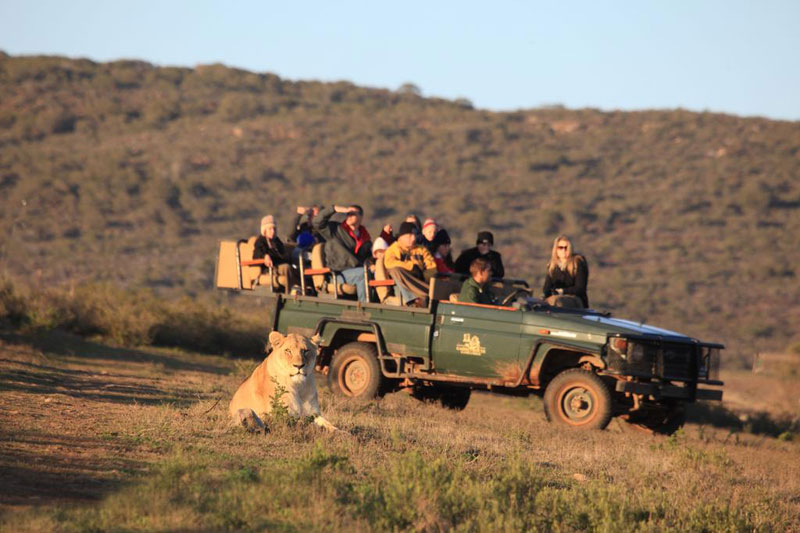 Chandelier is not only home to a wide range of game (enjoy buffalo and giraffe ‘experiences’), but it’s also an ostrich show farm with accommodation in luxury tents and log cabins.

You’re ideally placed here between the Garden Route and the Klein Karoo, the Outeniqua and Swartberg Mountains your backdrop. Chandelier’s sundowner bush dinners, up in the mountains, are definitely worth a mention. 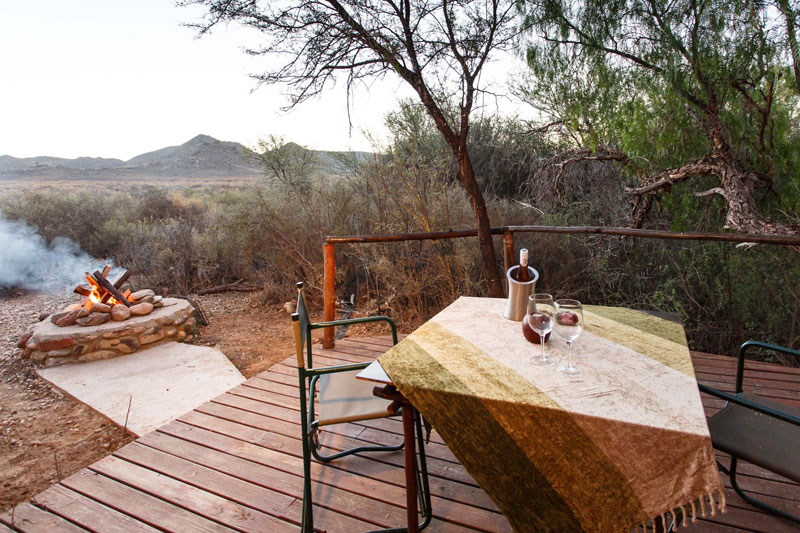 Probably the closest game lodge that can be considered a realistic “Safari in Cape Town“, Aquila is named for the endangered black eagle that thrives in the area.

Set in amongst the Karoo mountains, valleys, rivers and kloofs it’s also one of the closest Big 5 safari in Cape Town, and because of this they specialise in half-day, full-day and overnight safaris. Choose from accommodation in the lodge or on little stilted stone and wood cottages set into the hills. 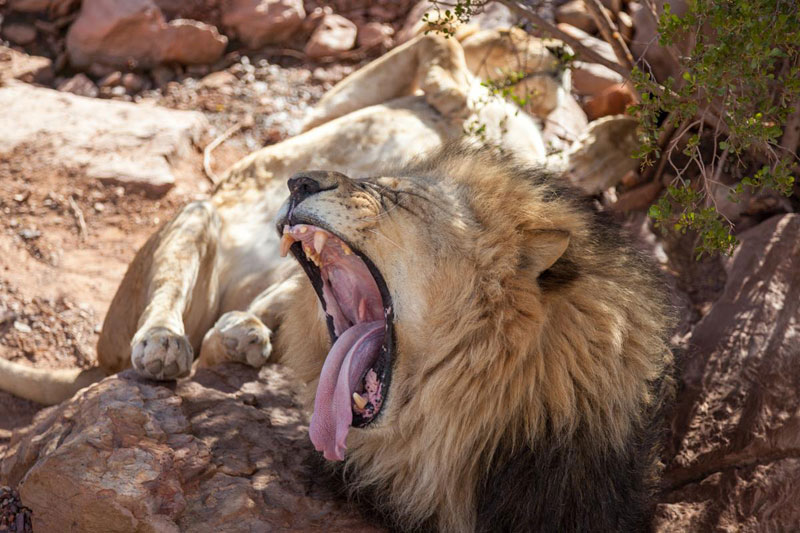 In the foothills of the Swartberg Mountains in the Klein Karoo you’ll find this bushveld game lodge, which lies in the heart of ostrich country close to the Cango Caves and Oudtshoorn. 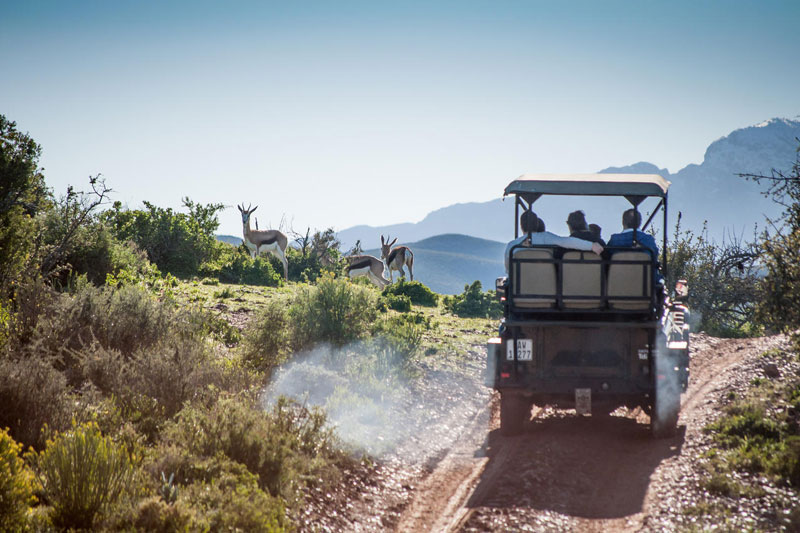 You’ll see a range of wildlife that includes hippos, meerkats and the Big 5 at Inverdoorn. It lies in the Breede River Valley in the Ceres Karoo, really close to Cape Town, making it the closest “Safari in Cape Town” experience.

The Western Cape Cheetah Conservation is based on the reserve, and there are other stories of rescue amongst the animals that now roam the reserve. Choose from a series of chalets, guest houses, and a tented camp. 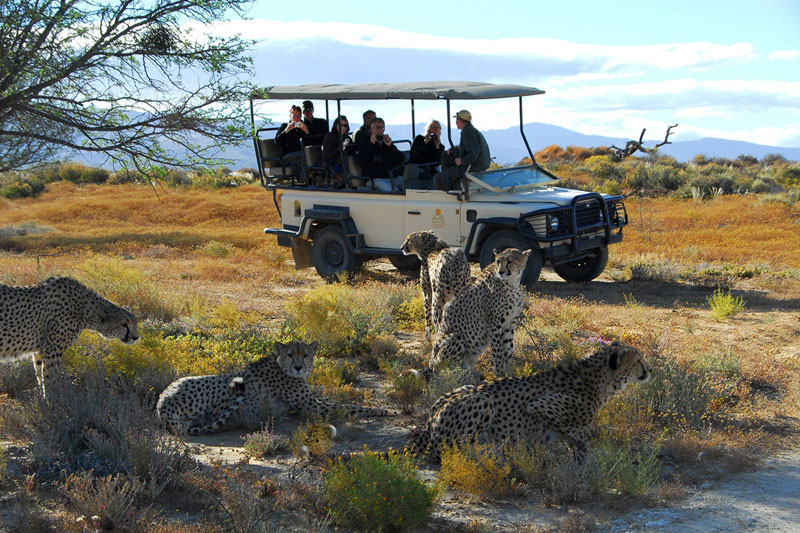 Stay in the Botlierskop Reserve with views over a waterhole from one of four just built self-catering bush villas on the Garden Route. Botlierskop is home to rhino, buffalo, giraffe, zebra, various antelope and rescued lions.

Explore either on horseback or 4×4 safaris. But you’ll be just as happy simple watching the waterhole, listening to the birdlife or sipping sundowners in your fire pit. 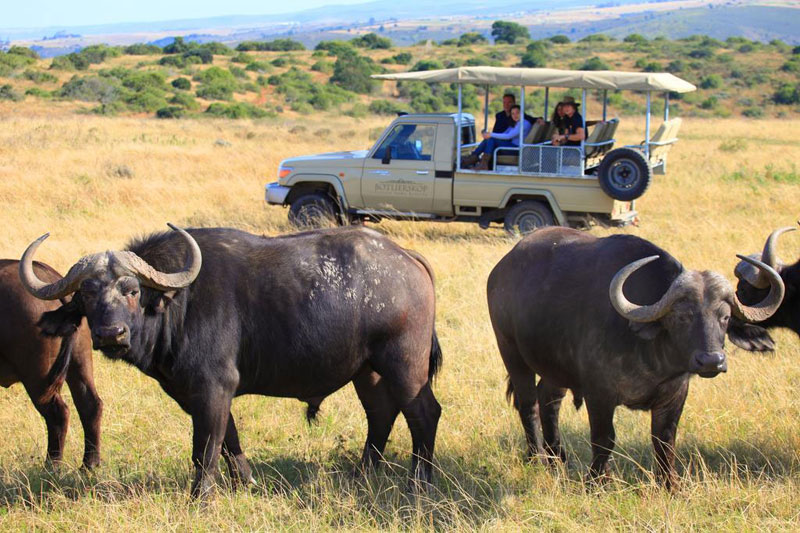 You’re only 21 km from Mossel Bay yet this 4 000 hectare game reserve couldn’t be more secluded and the access to game is brilliant – lion, buffalo, rhino, giraffe, mountain zebra and the rare black impala.

Stay in a series of luxury tents or the manor house. 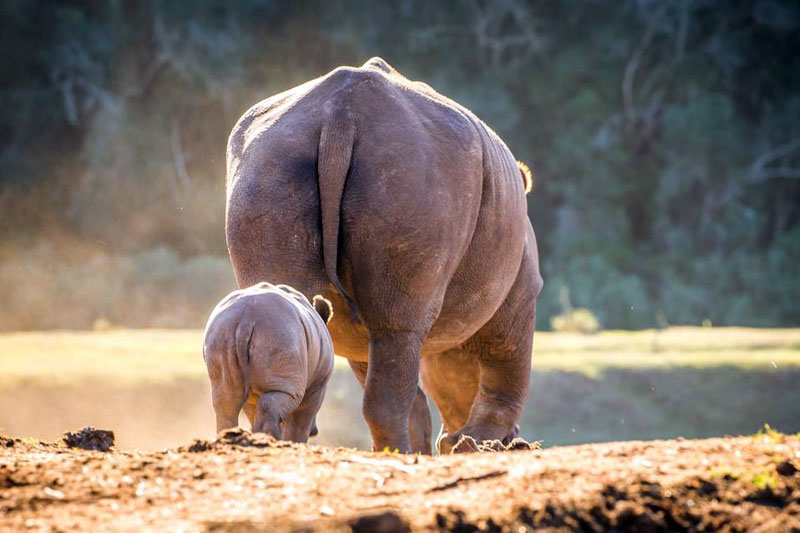