The aardvark. The only surviving member of the prehistoric species Tubulidentata.  It looks like a rabbit crossed with a piglet and a kangaroo, and is sometimes called an African antbear, or a Cape anteater.  Actually, its name comes from the Afrikaans meaning ‘earth pig’ or ‘ground pig’, due in no small part to its habit of burrowing under the ground to avoid the heat of the day (they only come out at night). 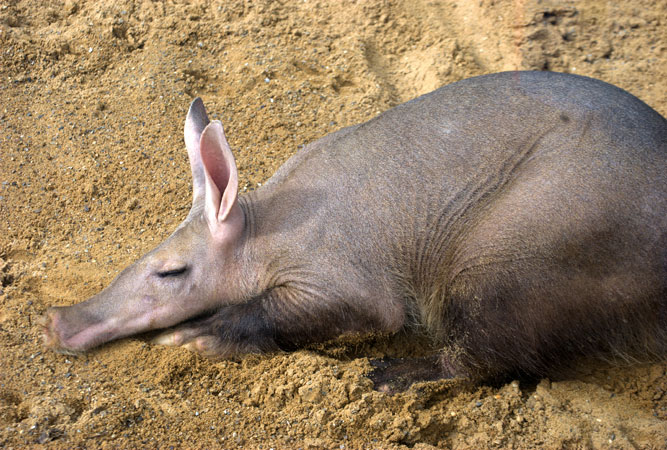 Despite its name, the aardvark is not even vaguely related to the pig, nor the South American anteater, despite looking fairly similar (only smaller). In fact, its closest living relatives are elephant shrews, dassies, elephants and tenrecs (a Madagascan animal that resembles a hedgehog, shrew or mouse).

So, if you’ve managed to spot an aardvark in your life time, I’m impressed…

They are found in sub-Saharan Africa where they dig, with their front ‘trotters’, up to 20 deep burrows across a territory radius of between 10 and 30 km, moving frequently to confuse predators. Porcupines often use their deserted burrows. As do foxes, genets, springhares, meerkats, ground squirrels and mongooses.

The aardvark uses its pig-like snout to sniff out ants and termites, digging up to 50 000 insects a night by catching them with its long and sticky tongue (up to 30 cm long).

Where to spot the elusive aardvark? The following is a comprehensive, but by no means exhaustive, list of nature reserves. 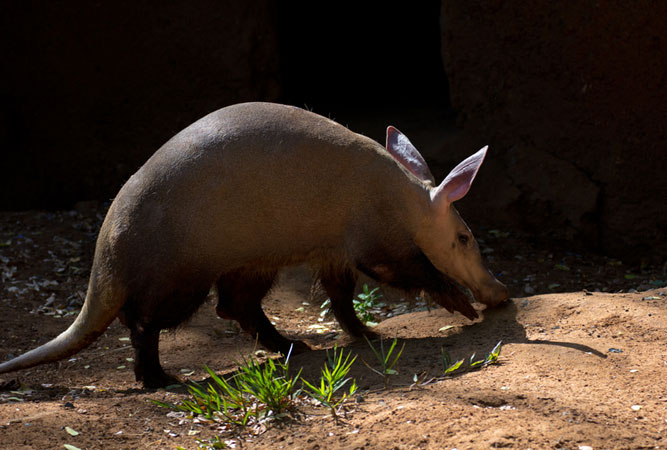 Aardvark Nature Reserve, in the heart of the succulent Karoo – a desert biome with the highest diversity of succulent plants in the world – offers three-hour aardvark tours, on which one follows the tracks of the aardvark, explores their activities and looks for any sign of them left during the night.

The reserve is a prime spot in which to do this as there is no big game here. Instead expect to learn more about the birds, reptiles, insects, fossils and unique rock art of the area. Find out more here.

Just six kilometres away from Suikerbosrand Nature Reserve near Heidelberg, Alice Glockner Nature Reserve might be small, but it serves the very necessary purpose of providing an escape to nature so close to a large city.

The reserve boasts an array of smaller, impressive animals and insects, as well as plants – like the Heidelberg copper butterfly, some sixteen plants of significant medicinal value and a list of little mammals that includes the aardvark, porcupine, black-backed jackal, mongoose and meerkat. Find out more here

Close to Kimberley in the Northern Cape is another reserve that boasts a list of significant smaller mammals that you can see only at night. These include the black-footed cat (which the reserve radio-collars to track) and the aardvark.

It is also home to the bat-eared fox, porcupine, caracal and is the world’s leading research facility for the aardwolf, or earth wolf – also known as the maanhaar jackal. Benfontein’s bird list reads like a who’s who of bird species that includes the African fish eagle, larks, pipits and the African white-backed vulture. Find out more here

The reserve, through which the N1 passes, lies on the ‘dry and hard’ side of the Gariep River. Not only is the reserve home to the only hippos in the Karoo, reintroduced after the last were shot in the area over 200 years ago, but there are no predators in the 12 000 hectare reserve, which means you can safely explore it on a mountain bike. Find out more here 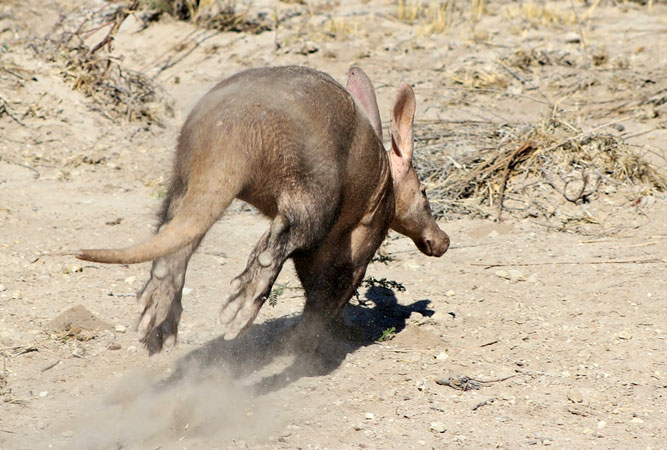 Most of the 914 hectare Rocherpan Nature Reserve is a seasonal vlei, but what adds to its allure is that it adjoins a marine reserve that stretches 500 metres out to sea. Combined the two give rise to over 183 species of birds that include 70 water birds. It lies on the same road that heads through Dwarskersbos on the West Coast.

It is seldom visited as few people know about it. But there is evidence of burrowing animals, like dune moles and aardvarks (just difficult to actually spot them as the reserve is closed at night). Find out more here

Samara is one of the only reserves in the country that markets itself as a home of the aardvark (it is also home to the endangered Cape mountain zebra, blue crane, meerkat and cheetah, amongst other plains animals). It is one of the few places you can be guaranteed you will spot one.

The reserve provides aardvark viewing after dark, to coincide with the time they emerge from their burrows, as part of their night drive.

The highlight of Witsand Nature Reserve of the Kalahari are the meerkats that live in the 100 metre high, 10 km long sand dunes that also emit strange roaring noises when disturbed by either wind or man. The white sand (witsand) of the region is unusual, surrounded as it is by regular red Kalahari sand.

The white of the sand is thought to exist as a result of an isolated range of hillocks buried beneath the dunes. Water that springs from the rock gradually removes the iron oxide coating from the grains of sand, turning them white. You can expect to see pangolins and aardvark in the reserve. Find out more here