The big cats in South Africa receive a lot of attention. In fairness lions, leopards and cheetah deserve the focus; most of these top predators are in danger – we live in their space, we hunt them illegally and kill them when they prey on livestock.

But South Africa is also home to four smaller cats – the African wild cat, the black-footed cat (now known as the small spotted cat), the caracal, and the serval. To this list I wanted to add the civet and genet but they are not, in fact, cats at all. Instead they belong to a family known as Viverrids, related to the mongoose and meerkat…

The Four Small Wild Cats and where to see them … 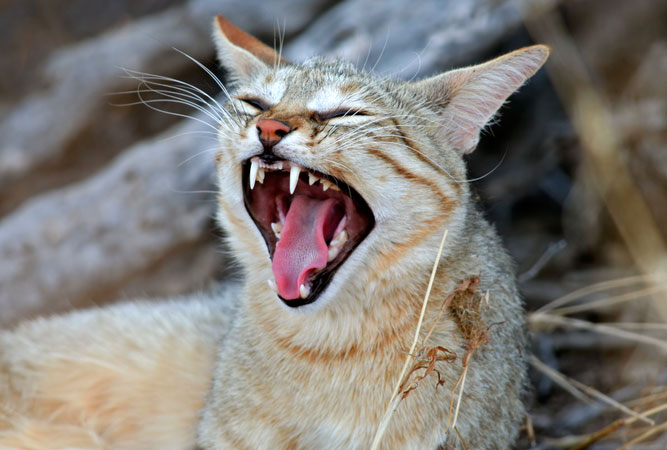 The African wild cat is roughly 45 – 75cm long with sandy grey stripes and a characteristic dark stripe running the length of its back, from the neck. But for the distinctive orange on its upper ears (actually more tawny than orange), and paws with black soles (difficult to spot unless you’re up close), they look much like your common household tabby. These cats, however, are a tad more ferocious, and stand a little higher – their legs are longer.

They are found in the South African savannah and bushveld where they live largely nocturnal lives and are difficult to catch a glimpse of, unless on a night drive, as they are cautious and reluctant to expose themselves despite having the courage of a lion. Interbreeding with domestic cats has resulted in fewer numbers of the pure strain of African wild cat. 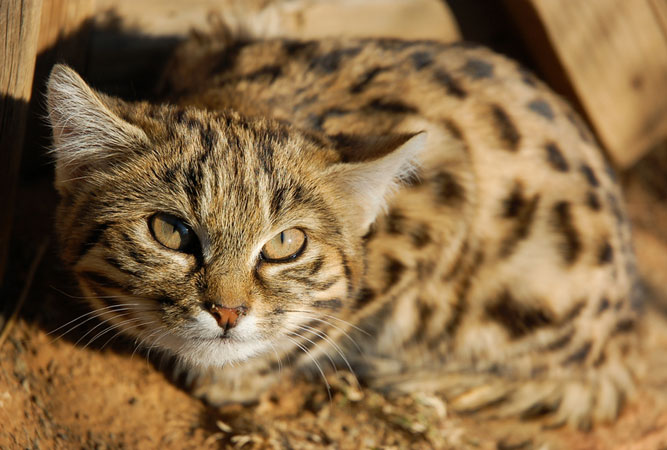 The small spotted cat got its former name (black footed cat) from the black soles of its feet – a difficult distinction to make, given that the African wild cat is similarly endowed. However, its coat is patterned in black or brown oblong spots (hence its new name) and it is the smallest of the wild cats in Africa, weighing in at under 2 kg (hence the emphasis on ‘small’). It is seldom that one sees the small spotted cat. Not only do they hunt nocturnally, but they are particularly antisocial and will run away at the first hint of disturbance.

During the day it hides out in the burrows of springhares, beneath slabs of rock or in hollow termite mounds (they are sometimes called anthill tigers). They are also poor climbers and their stocky legs and short tails are one of the reasons they tend to avoid climbing trees. Small spotted cats are endemic to southern Africa but found mainly in South Africa, Namibia and some in Zimbabwe. Because of chromosomal differences, they cannot interbreed with other cats.

The caracal, also known as the desert lynx despite not being a lynx at all, has distinctive tufty ears, a white chin and throat and a creamy underbelly, its fawny skin colour almost devoid of spots or markings. The long black tufts at the tops of the ears is the only characteristic they share with the lynx famiily.

It is the largest of South Africa’s small cats, and also its most fierce – they can tackle prey as big as three times their own weight, which means that taking out small antelope and domestic livestock is not beyond them, making them prey to persecution by farmers (who would do well to keep their caracals in exchange for the odd livestock, as they keep the dassies and rodents at bay).

They can  leap up to three metres in the air, catching birds on the fly. Though they prefer woodland and savanna in recent years caracal have also been spotted in the forests of KwaZulu-Natal, a region in which they did not previously occur. 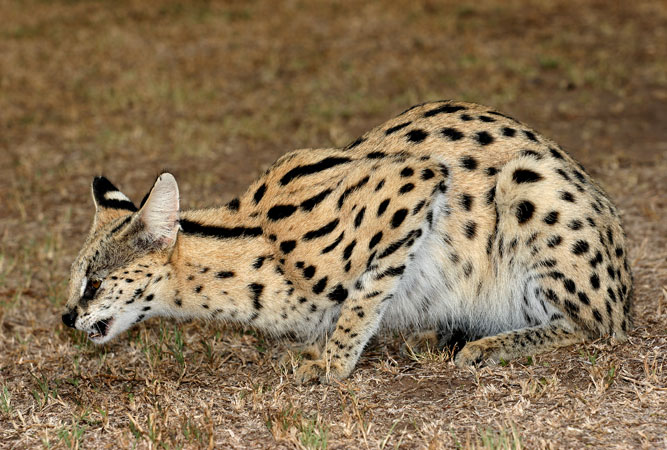 The serval is an unusual looking, beautiful cat with a small head by comparison with its long neck, slender body and equally long legs (its hind legs are longer than the front). Its ears too are very large and oval and it is covered in black spots of varying size and shape.

It is built for height, rather than speed, and depends on wetlands and grasslands for its diet of mostly rodents.

They are unusual to spot and despite being accused of killing livestock, the most they will take out is the odd chicken. They are native to Africa south of the Sahara.