Now reading: Best Places to Stay on the Umhlanga Coast

The best places to stay on the Umhlanga Coast ~ The Umhlanga coastline with its red top stripe lighthouse, whalebone pier, and beach promenade is an all-year-round haunt for its balmy weather, trend-setter restaurants and high-rise hotels and apartments.

Often written as uMhlanga, Umhlanga (the ‘hl’ is pronounced ‘ll’ the way the Welsh would say it) is Zulu for ‘place of reeds’ and refers to the beds of reeds that grow on the Ohlanga River north of here, not the fields of sugarcane that grow on the hills.

The Umhlanga coastline promises beachside living, the constant sound of the ocean, days of intoxicating sand and sea, and sunshine virtually all year round… 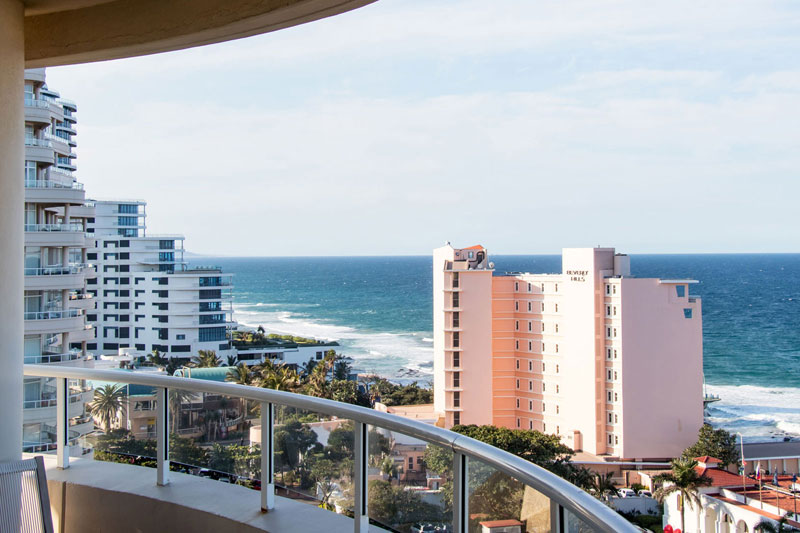 The light, open-plan living and kitchen area with its carefully selected chic furniture and striking rug opens directly onto this self-catering apartment’s balcony with views that bring the sights and sounds of beachside living to you. You don’t even have to go to the beach. Three bedrooms, two with en-suite bathrooms, make it difficult to resist. 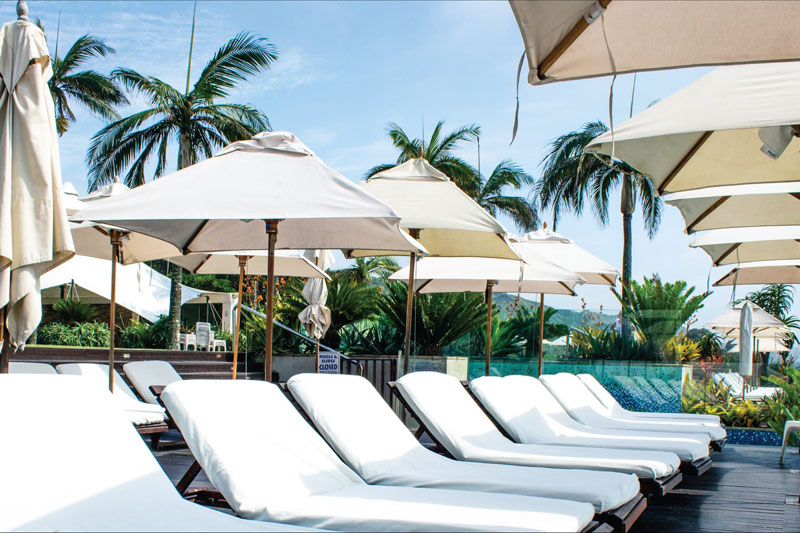 We couldn’t decide between these two equally beautifully decorated apartments, so leave the choice to you. Interestingly both use delicate shades of teal and grey to blend appealingly with the kitchenettes and bathrooms. One is on the ground floor, the other the fourth. 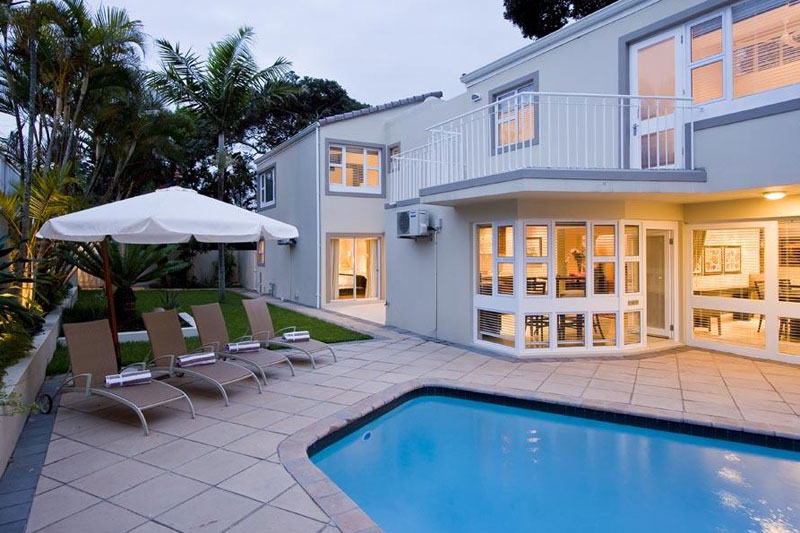 This elegant guesthouse, with its carefully selected furnishings and art work, is a graceful home in a quieter part of Umhlanga, close to the La Lucia Mall and Gateway Shopping Centre. Accommodation is on a B&B basis in luxury or superior rooms, although we’re rather partial to the manor suite. 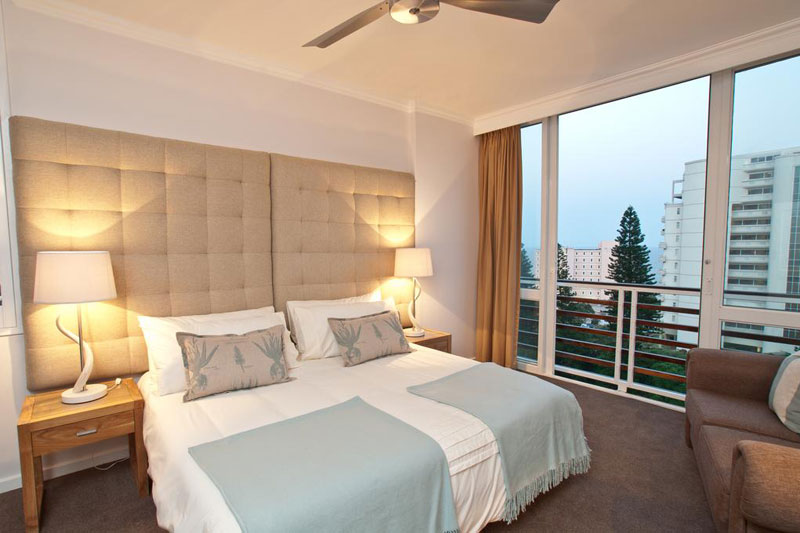 This fresh and appealing apartment is perfectly poised on the fifth floor overlooking the sea, with sliding doors that open onto a patio perfect for sundowners or morning coffee, not even 200 metres away from Umhlanga’s main swimming beach. It’s tasteful two bedrooms and two bathrooms comfortably sleep four. 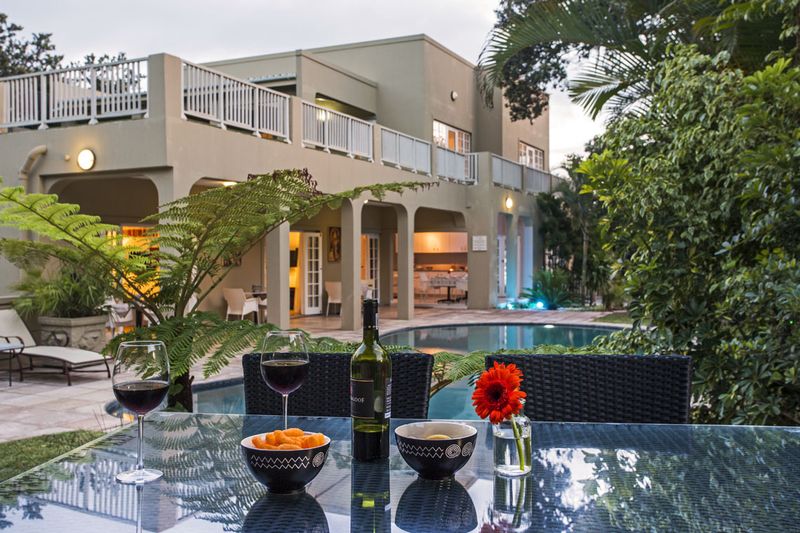 Not even 5 km along the beach from Umhlanga you’ll find this guest house set in an indigenous garden, with a pool (onto which most of the rooms look), even though you’re only moments away from a private entrance to the beach. Best of both worlds is how it makes it one of the best places to stay on the Umhlanga Coast. 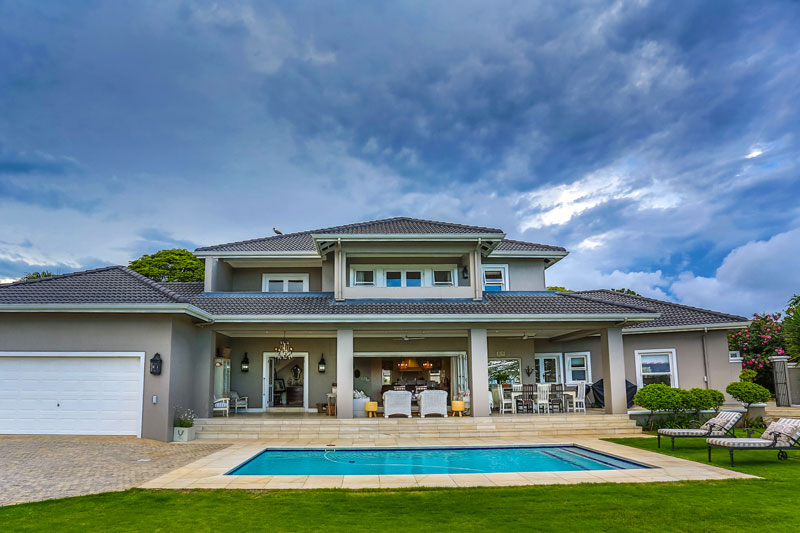 Woodbury House, not far from La Lucia beach and shopping mall, with its elegant communal dining and lounge areas, and generous terrace overlooking a pool, offers three generous rooms that sleep two in each. 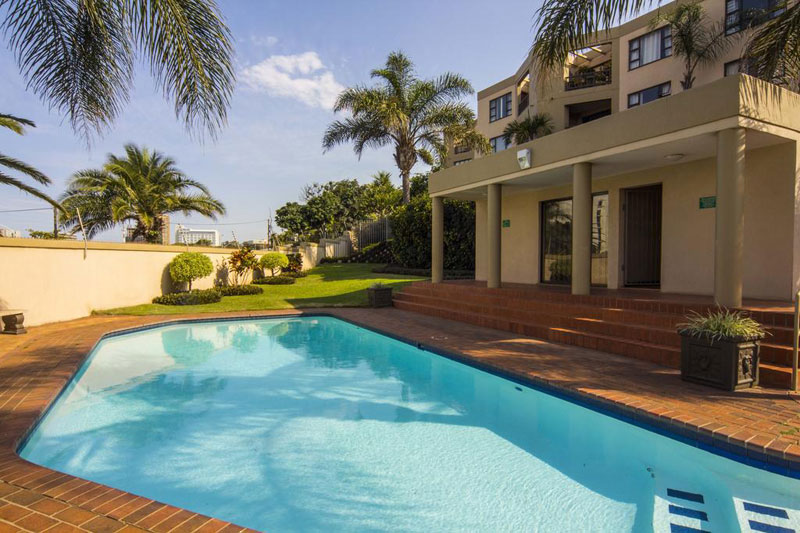 Hotel rooms and hotel service is perfect for those on business but as attractive to those here for the beaches and beachside lifestyle as it’s right in the heart of everything and only 20 minutes’ from King Shaka airport. Choose from 43 superior and seven deluxe rooms. 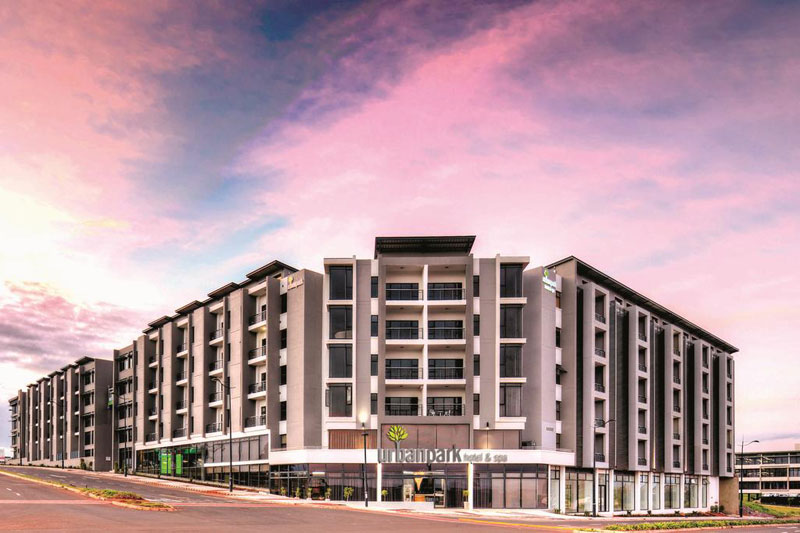 It might be a ‘hotel’ but Urban Park offers 95 self-catered hotel-style apartments, each with its own fully-fitted kitchen. And you can choose whatever suits your budget – studio suite right through to four bedroom apartments. An indoor swimming pool, gym and restaurant adds to the appeal. 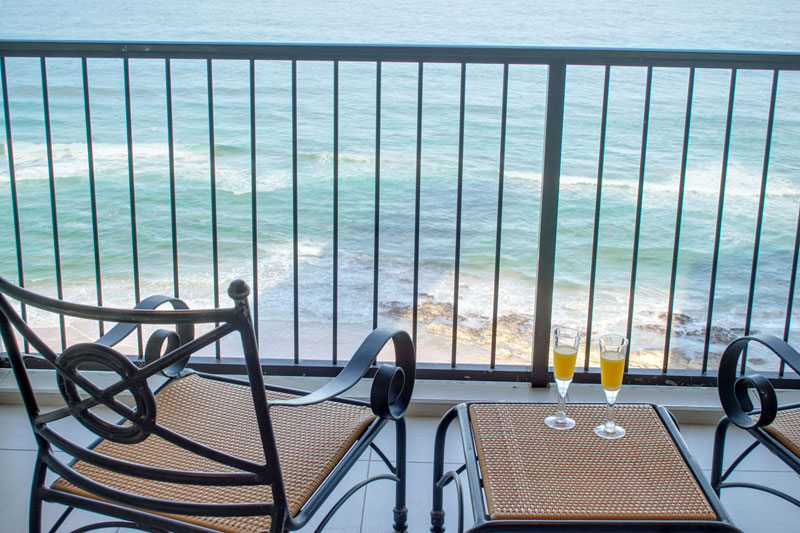 This classic three bedroom self-catering apartment is high up on the 11th floor of the Bermudas with the best sea views you can imagine and easy access to the beach. The décor is gentle and refined, the kitchen fully kitted out and the balcony a perfect space for instant sounds of the sea. 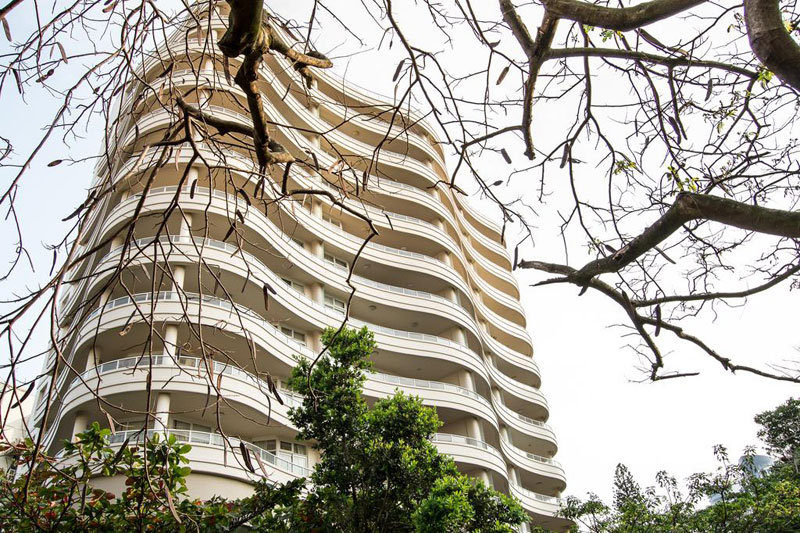 Another perfectly placed self-catering apartment, this time on the 7th floor of the Oyster Rock complex with a balcony overlooking the sea. You’re close to the beach, within walking distance of restaurants and shops, and the apartment, unusually, has four bedrooms, two of them en-suite. 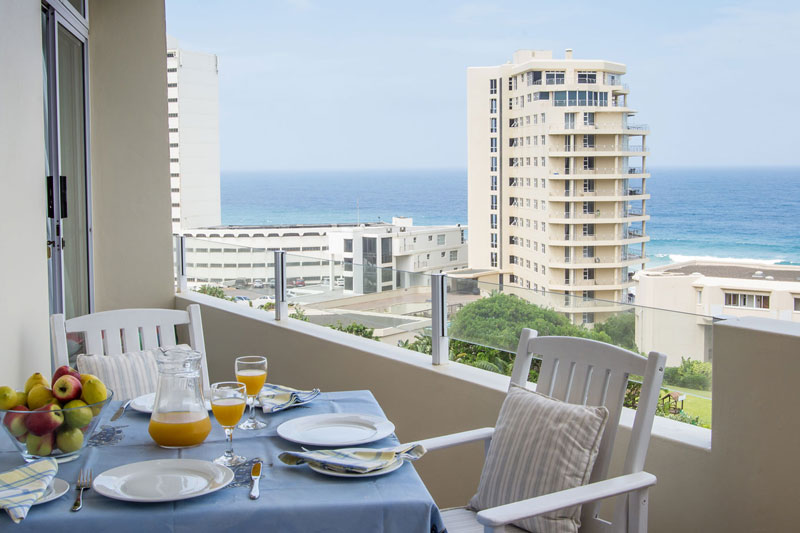 A three-bedroom apartment with light and airy open-plan living areas and a balcony from which you can see the beach. You’re right in the heart of things here and need to do little other than fall out of bed and head to the beach. And if that doesn’t appeal, there’s also a complex swimming pool. 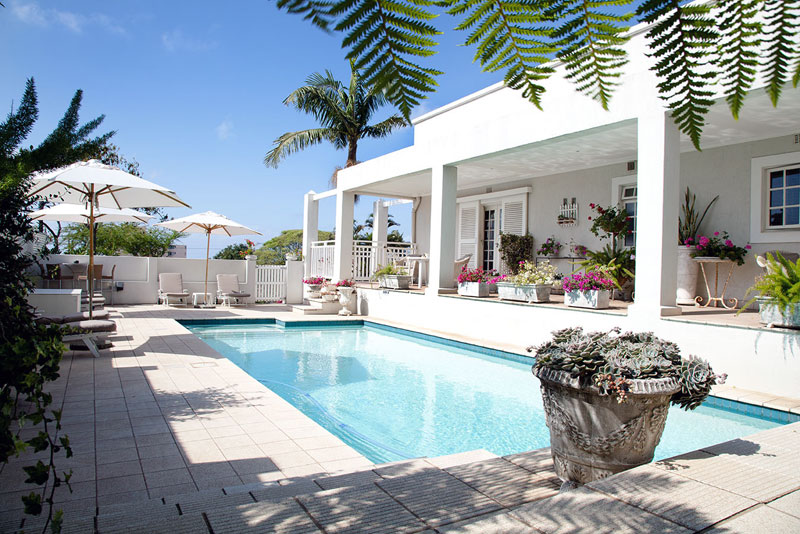 A long time favourite on our best places to stay on the Umhlanga Coast, Sandals Guest House is in a quieter part of Umhlanga, a block away from the hurly burly of the beachfront and village and yet only 200 metres from the beach. There are five guest rooms on offer, whilst the calm terrace overlooking the pool offers refuge. 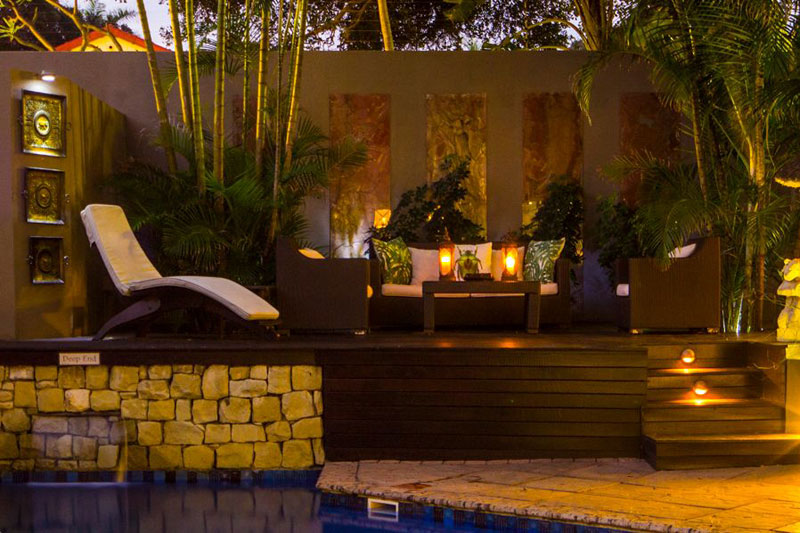 Just down the road from Umhlanga you’ll find this elegant Bali-style guest house in amongst the milkwood forests of La Lucia, a mere 20 metre stroll away from the beach. There are eight impressive en-suite rooms to choose from. 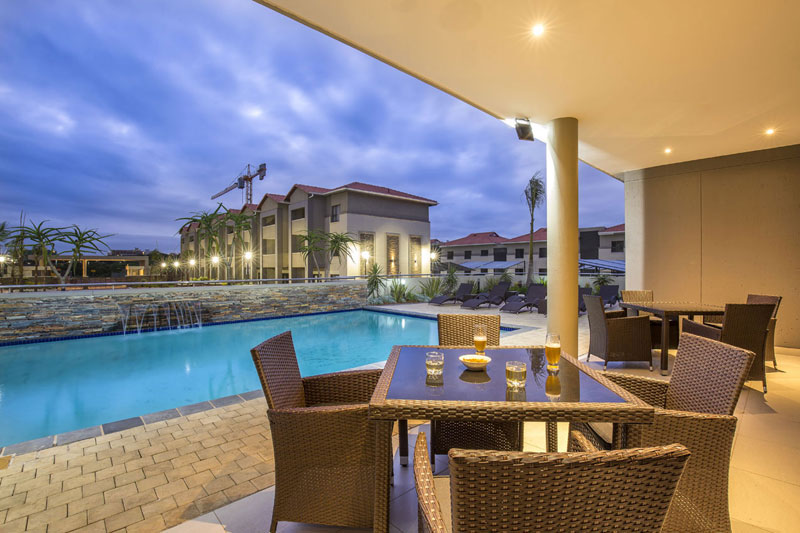 Savannah Park gives you hotel-style apartments up on the ridge of Umhlanga close to Gateway Shopping Mall. We particularly love the selection of wallpaper as a backdrop to some of the bedrooms’ headboards. 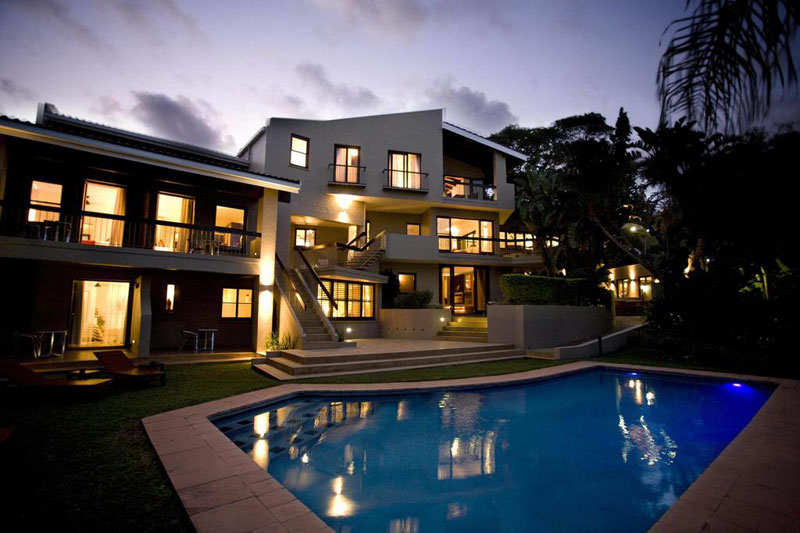 We’ve saved the best for last, for this former manor house has been converted into a ‘little hideaway’ that is awash with gorgeous interiors and beautiful individually decorated bedrooms. There’s a wellness centre and personal trainer too. Go prepared for pampering at this firm favourite on our list of best places to stay on the Umhlanga Coast