South Africans clearly do not lack in the inventiveness department. We’re forever coming up with alternative ways of doing things.

Transport is no different. The heaviness of traffic, the influx of visitors demanding unique experiences, and the need to get from A to B have all contributed to these forms of unusual transport in South Africa… 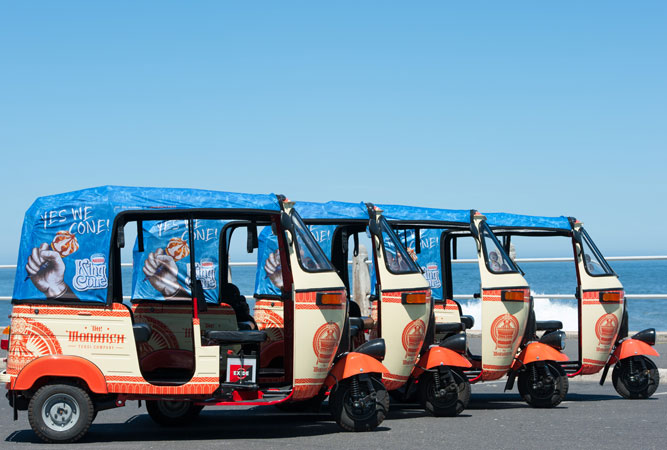 Forget having to go all the way to India or Thailand to wind your way through traffic in a sturdy little tuk-tuk. These zippy, easy to ride motorised tricycles now whiz their way through Sandton, Rosebank and Melville in Johannesburg, and the city bowl in Cape Town. The auto-rickshaws with their windowless bodies and little canopies are just right for short distances. They fit up to three passengers at a time, and have a little space left over for luggage.

Perfect, in other words, for a quick three to ten kilometre spree, like a business meeting or lunch date. Their 45km/h rate makes them an ideal door-to-door service aimed at tourists, business people, students and party goers. To catch them in South Africa contact one of the following companies:

tuk-a-lift operates in Lenasia
*rates: R14 for 4km; R20 beyond that

*Prices may well have changed since this article. 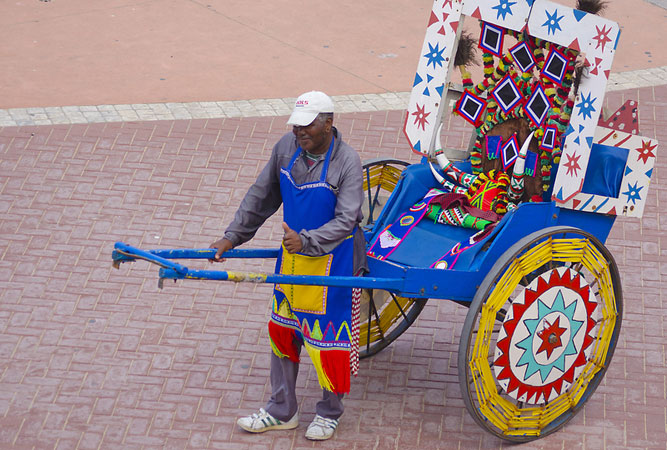 The classic rickshaw ride is synonymous with Durban. The two-wheel passenger cart, pulled by one man, usually with one passenger, dates back to Japan where the name comes from ‘jinrikisha’ (jin means person, riki means power, and sha means vehicle). Introduced in Durban by one of the sugar barons to transport his wife, they took on a life of their own.

Within 10 years there were as many as 2170 rickshaws and 24 000 registered pullers – becoming the main mode of transport in the city centre and the docks by 1902 (pulling a rickshaw was a highly sought after job; something like driving a minibus taxi today).

The law introduced a rather dull calico suit for pullers, who wore traditional headgear as a way of enhancing the suit. They further individualised their clothes by adding extra braids, bangles of plaited reeds and seeds that rattled on their lower legs. The rickshaw (or ricksha) service was totally unique to Durban and it became fashionable to own your own private ricksha.

Then the car arrived on the scene. By the 1950s rickshas had evolved into a tourist enterprise, rather than a transport service. And their headdresses had become enormous – threatening to unbalance the runners. By 1971 there were 90 rickshaws; by 1980, only 10. Today there are about 20, as a result of a slight revival.

Never heard of them? A pedicab is a high-tech electric micro-cab. In Cape Town they’re called Mellowcabs. And they’re yellow and made from recycled materials. The idea is that they are both advertising space and a cheap taxi service. Introduced by Neil du Preez they’re due to go ‘live’ later in 2014 – designed and manufactured in South Africa.

They’re eco-friendly because of a series of unique technologies like: regenerative braking (the energy usually lost when braking is recovered and converted into electricity); mobile phone chargers in the cabs; the panels of the cab light up with an LED light system, making advertising VERY visible; the cab will by hydrogen fueled (zero emission); and the cabs intend have an on-board tablet computer.

Mellowcabs will address the fact that 80 percent of trips in cities are less than 4 kilometres – usually the distance between a train, a bus stop and your home, a conference centre and a hotel, or a university and a residence. They can also function as delivery vehicles. 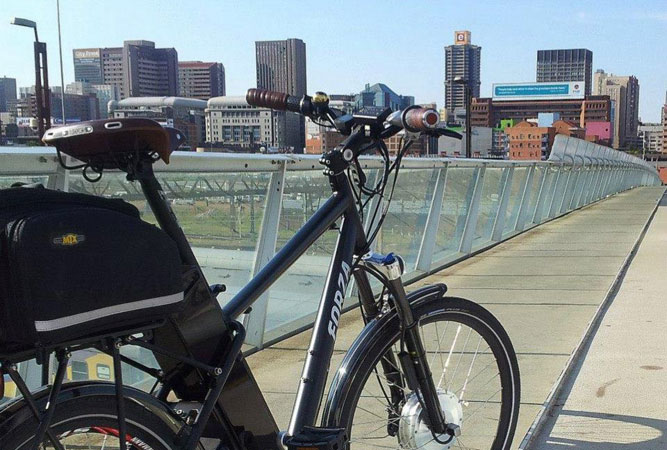 You won’t have to look far to find an electric bicycle hire in South Africa’s major cities. Even Cape Town’s Mount Nelson Hotel hires out the Octave (purpose designed and built as an electric bike rather than a bike with added electrics or motor).

Cycology in Cape Town not only hire out bikes on a daily basis, but also lease their custom-made electrical bicycles for six to twelve months at a time. On an electric bicycle your carbon footprint per kilometre is a nominal 1% (compared with 100% as an SUV solo driver). It’s better than sharing a carpool (24%)!

Travelling between 25 km and 60 km an hour, depending on how much the wind is blowing, or how steep the hill up which you’re pedalling, an electric bicycle is a great way to see the city – no problem with parking, traffic jams or sore legs. 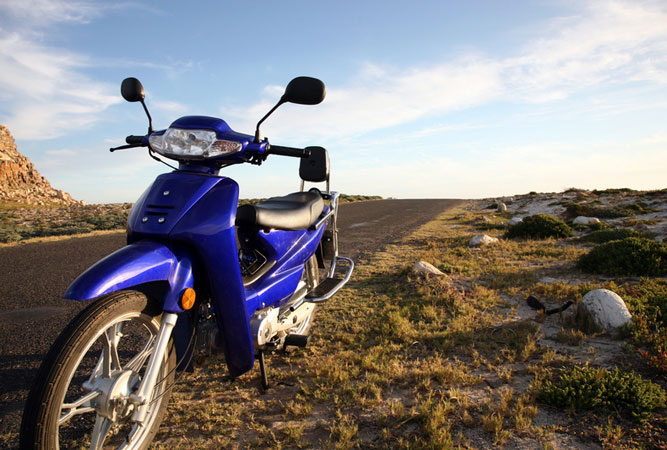 Zooting on a scooter along the streets of Cape Town’s city bowl not only makes a lot of sense (no more traffic jams, parking problems, or high fuel bills) but it comes with a huge cool factor: they’re perfect for café dawdling, pub crawling and girlfriend-lifting. And there’s that hint of Italian hill-town, vintage street-cred that makes us all drool when we see a Vespa on Kloof Street.

But it’s primarily a Cape Town thing. A scooter in Jozi is going to last about as long as a mosquito on a windscreen. It only takes a truck or a SUV to sideline you. it’s no place for a scooter with a top speed of 100 kph unless you live, work, eat and play in a village like Parktown.

PS: You need a valid motorcycle licence to ride one of these, and you will need a deposit.

The minibus taxi is as commonplace in South Africa as the tuk-tuk is in Thailand (although tuk-tuks are now also found on the streets of Jozi, but that's another story) . They're everywhere. Last count, which was quite some time ago, saw over 50 000 of them...

Every day, thousands of Capetonian commuters use public transport to get where they need to be. Squeezing into minibus taxis and train carriages, it’s a long haul to and from work for many of the Mother City’s citizens. Public transport offers a cost-effective...