Now reading: 5 Insider Things To Do When In Vermaaklikheid

The fairytale hamlet of Vermaaklikheid lies on the lower reaches of the Duiwenhoks River, south of Heidelberg. To find it on Google maps we have to do a precise search, for it appears only as a map marker two-thirds of the way up the river, on a dirt road east of the R322 between Heidelberg and Witsand.

Vermaklikheid isn’t on any tourist routes, and has little to lure the Toyota Fortuners and their ilk – no farmstall or artisan bread-and-pie-producing bakery here.

Vermaaklikheid (meaning ‘entertainment’ or ‘amusement’ – which may or may not allude to the town’s original subsistence on sweet potatoes and ‘witblits’) is a smattering of thatched, white-walled Cape-style cottages (a couple of which are for sale), a shop (which always seems to be closed), newly planted olive groves, and a not-recently-in-use trading post. 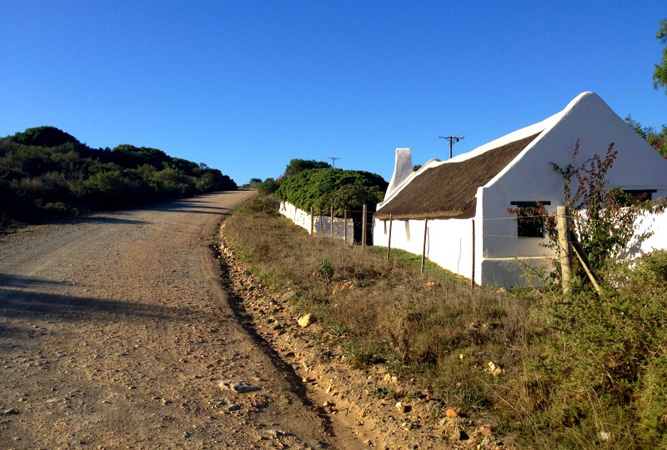 The gravel road through Vermaaklikheid, off the N2 just past Heidelberg, continues to Die Puntjie (point) where the Duiwenhoks River meets St Sebastian Bay at a scarred, windswept coast littered with caves; uninviting even to the fishermen who round the point to fish.

Take a left as you enter town and perched on the rise are a series of cottages and hartbeeshuisies, home to the 100 strong local community of fishermen, builders, woodcutters and thatchers who eke out a meagre existence here.

Life in the last 50 years has changed little beyond telephone and wireless access. 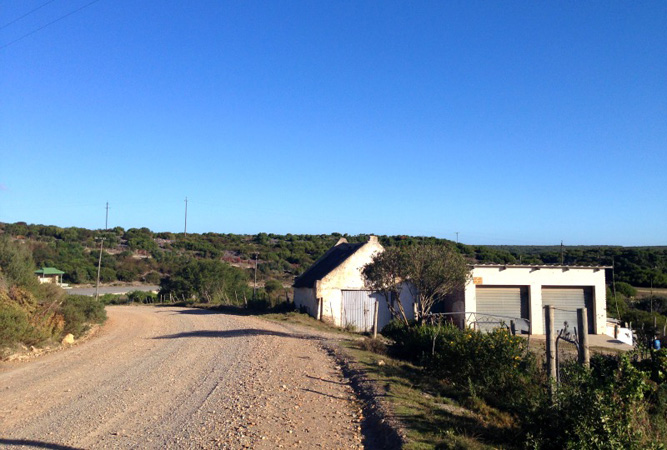 The fynbos shrubland and lime rich soil of Vermaaklikheid were once acres of hanepoot vineyards. What began as a 15 000 hectare farm soon became subdivided into smaller plots as the original farmer’s family grew. Today, the farms are modest; the farming community small.

But back then the village was perfectly placed on the journey between Riversdale and Stilbaai, where it functioned as a halfway station, with a toll house for road tax.

Few people know about Vermaaklikheid today. It no longer functions as a thoroughfare. Those who visit are content to keep it an in-house secret, sharing its location with a select few.

Our visit to the sleepy village is restorative. We stay on the banks of the Duiwenhoks River, content to rise and sleep with the sun, our lives measured only by the tide of the river alongside, and the scurry of crabs to and from the shore. 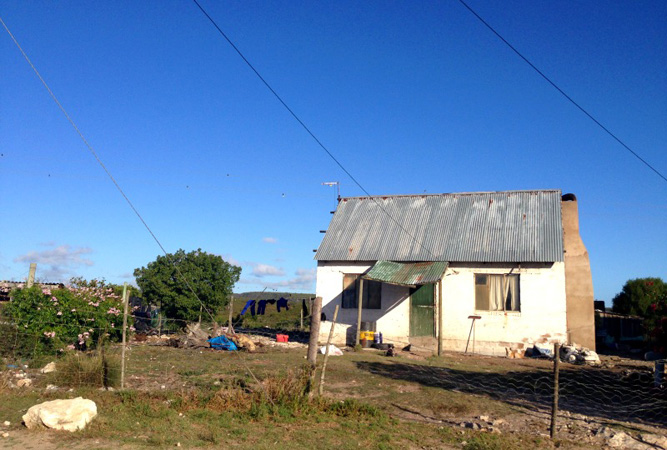 Here are 5 things to do when next in Vermaaklikheid…

Where the Duiwenhoks River meets the sea is what can only be described as an inhospitable outcrop of rock on the river’s east bank. Windswept, ruggedly beautiful and virtually beachless, the cliffs overlooking Sebastian Bay are lined with roughly 54 thatched houses.

These modest kapstylhuise stand on a portion of the farm Kleinfontein, which functioned as a holiday campsite for local farmers.

Over time the people of Vermaaklikheid and Brakfontein were allowed to build houses here rented at a nominal price per year; almost all of them built in ‘kapstylhuis’ style that goes back to 500 AD in Europe and was used by pioneering farmers when they trekked inland during the 18th century.

These are all that remain of this style of dwelling in South Africa (besides a handful in the Klein Karoo). You can visit only by invitation, but if you drive to the gate over the peak season, someone will invite you in for tea. (See previous article here: Puntjie)

2. Fish on the banks of the Duiwenhoksriviermond Private Nature Reserve

The estuary of the Duiwenhoks River is one of the most pristine in South Africa. Development is limited and the local farmers and landowners have united to form the Duiwenhoks Conservancy to preserve its plant, bird, fish and animal life.

The Duiwenhoks is rich in kob, leervis, spotted grunter and white steenbras but you must have a license to fish or collect bait in the river, spearfishing is not allowed, there are bag and bait limits, and throwing nets is not allowed between sunset and sunrise. 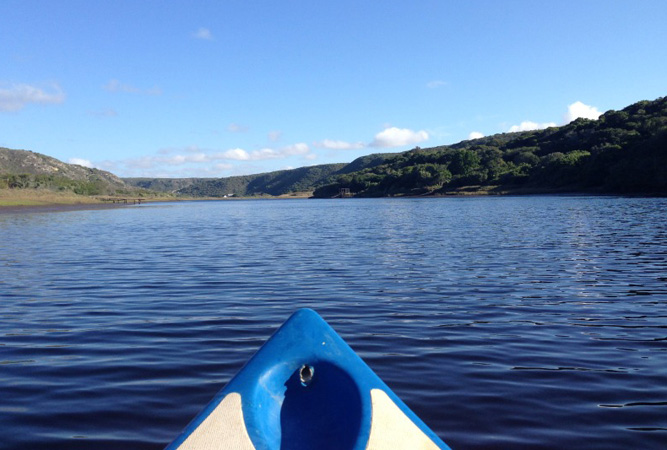 Blombos Cave is perched on a cliff above the Indian Ocean, just east of De Hoop Nature Reserve. In the cave paleontologists have recently discovered ‘kits’ used by humans to make paint 100,000 years ago. These beautifully preserved Middle Stone Age deposits – described by the BBC as an ancient ‘paint factory’ – make this cave the Cradle of Modern Humans.

This discovery challenges the idea that development of symbolic behaviour evolved in Europe.

The findings are evidence that humans in Africa 100,000 years ago were ‘modern’ and capable of a level of advanced thinking; able to manufacture paints in an organised and methodical way.

The cave is closed to the public, but continue on the same dirt road and the Tourism Bureau in Stilbaai (Die Palinggat) has the best Blombos display on Earth; two rooms full of exhibits.

Otherwise the Point of Human Origins Experience (Mossel Bay) is about the same time period’s origins of modern human behaviour and mentions the Blombos finds.

Near the olive groves in Vermaaklikheid is a sign for the Post Office and Kontrei Winkel (you can’t miss them). Follow these up a hill and you end up at the farm of Andries and Joey Odendaal.

Provided you don’t vaguely resemble the local liquor authority, they will invite you to taste their one-of-a-kind fynbos brandy, whisky, wine and liqueur, which they brew from fynbos according to a recipe that Andries claims is a new kind of alcohol production that is, hopefully, going to make him very wealthy…

Nearby Witsand is the southern right whale nursery of the Cape.

Great numbers of whales breed in the waters here between May and November. The popular village is also known for its fishing, sailing and kite-surfing.