South Africa is known for many things.

Architecture isn’t usually one of them.

But these 5 South African buildings are worth adding to your list of must-sees, when in the country … 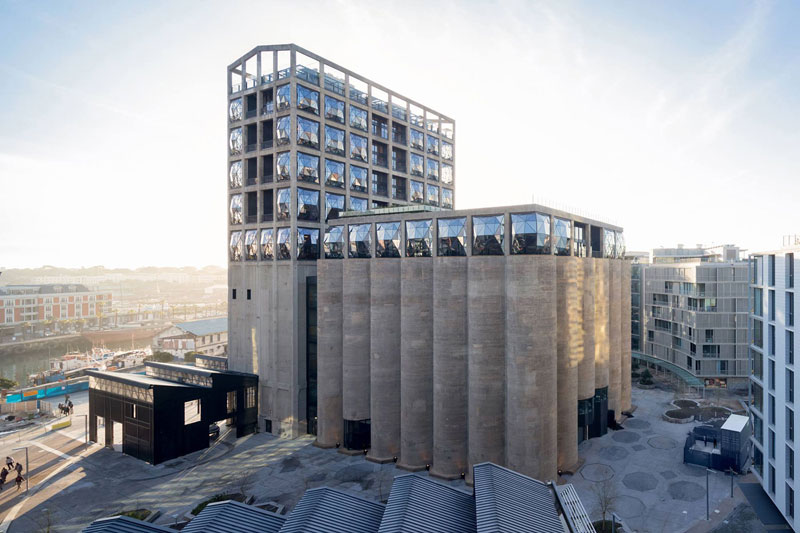 Cape Town’s huge contemporary art museum, the largest in Africa, opened in September 2017 in a converted grain silo, overlooking the Atlantic alongside the Victoria and Alfred waterfront.

Touted as Africa’s answer to the Tate Modern, Zeitz-Mocaa has 100 galleries spread across nine floors, whilst at the top is a boutique hotel. Its focus is 21st-century work from Africa and the diaspora, whilst at its heart is the private Zeitz collection.

Zeitz-Mocaa has been called the ‘8th wonder of the world’ for not only is the art it houses unusual, but the R500-million building, designed by British architect Thomas Heatherwick, itself is spectacular. It stands in what was for years a disused industrial area alongside the V&A Waterfront.

Indoors has been described as a cathedral, a contemporary space that swoops and sweeps up its many storeys.

Visit: there is an entry fee of R180/adult (under-18s get in free daily & adults go free on Wednesdays, if you can produce a local or African passport). 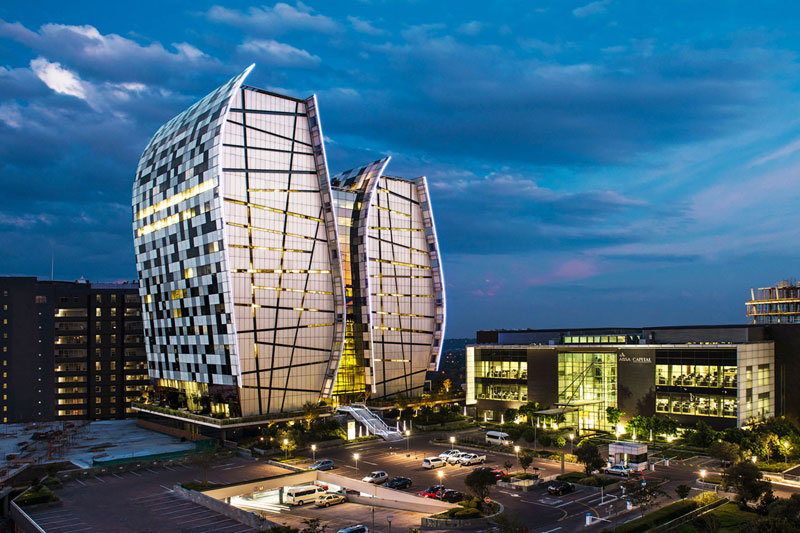 This unusual, bulbous building with its twin towers is an icon on the Sandton skyline. Designed by Paragon Architects it’s considered a progressive architectural move in South Africa’s rather conservative, up until then (2011), architectural culture.

The pair of unusually curved twin towers consist of concrete, glass and aluminium.

At night the completely glazed façade of the low energy glass twin towers are lit in a way that is particularly striking, made more so by its position on the western edge of the Sandton centre.

The towers stand above a six storey basement car park, and rise a further seventeen storeys into the sky. When it was first built it was described in glowing terms of ‘form and space’, and from the outside the highly patterned and abstract surface is unusual enough to warrant an Instagram moment.

The building is not only an office block, but includes showrooms and concept stores on its ground floor. 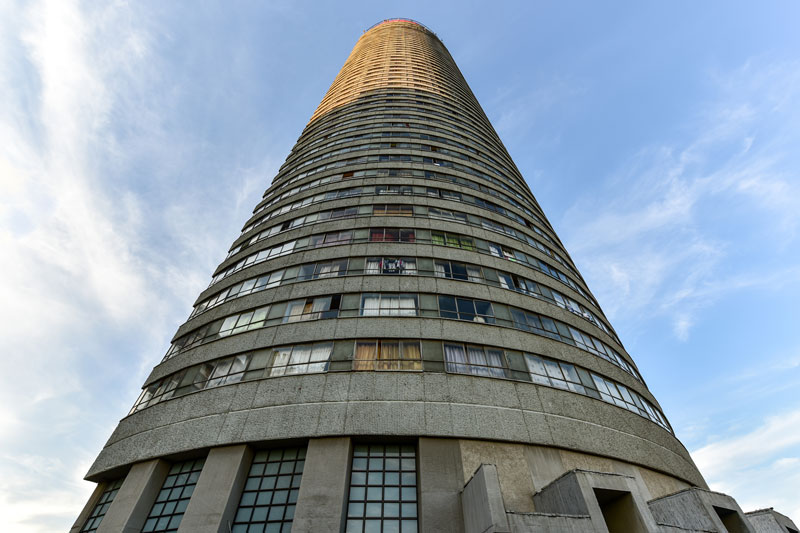 Johannesburg’s ‘tallest and grandest urban slum’ might have been an eyesore for some (enough to flee the inner suburbs for the northern suburbs in a mass exodus that started in 1984), but now the infamous city tower skyscraper is an icon snapped by as many instagrammers as can make it to Hillbrow.

The cylindrical beast of a building now identifies Jo’burg’s skyline in much the same way as Table Mountain does Cape Town; it’s synonymous with the city.

Today Ponte is part of the inner-city revival and features in newspaper articles the world over, photography exhibitions, and mostly, movies – the inner ‘courtyard’ is hired out to movie companies.

Views from the 50th floor penthouses are incredible, as is the unusual cylindrical inner core of the tower. On the roof is the Vodacom logo.

Visit: you can tour the Ponte building with a company called DalaNje (Mike Luptak has his home in one of the penthouses, so you’ll probably get to see the view from the top too). They also do a ‘taste of Yeoville’ tour, if you’re interested. 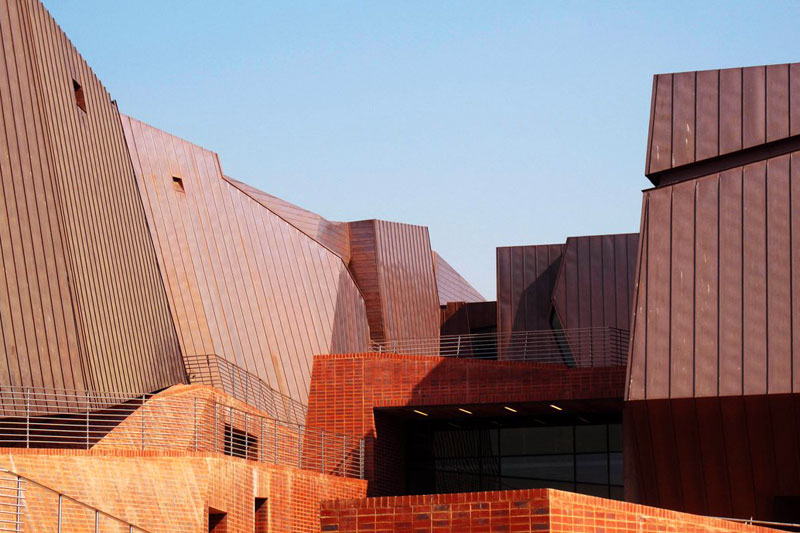 Considered one of South Africa’s top buildings (it won an award of excellence at the South Africa Institute of Architecture’s awards), //Hapo (pronounced “Klapo” with a Khoisan click) is an exhibition space in Freedom Park, Tshwane.

Opened as the government’s response to the Truth and Reconciliation Commission, Freedom Park is a memorial that honours those who sacrificed their lives for freedom.

It also celebrates the diversity of people who live in South Africa.

//Hapo needs explaining to appreciate its uniqueness. The original idea with the building was to create boulder shapes to blend in the with environment of the park, and to tie in with the Isivivane space, where a final resting place surrounds a series of boulders.

To this end the architects enveloped the outer building in copper (roof and walls) and inside is distinctly cave-like. It’s both unusual and distinctive.

Visit: There are daily guided tours of the park seven days a week (except for a few prominent public holidays) on the corner of Koch and 7th Avenue, Salvokop. 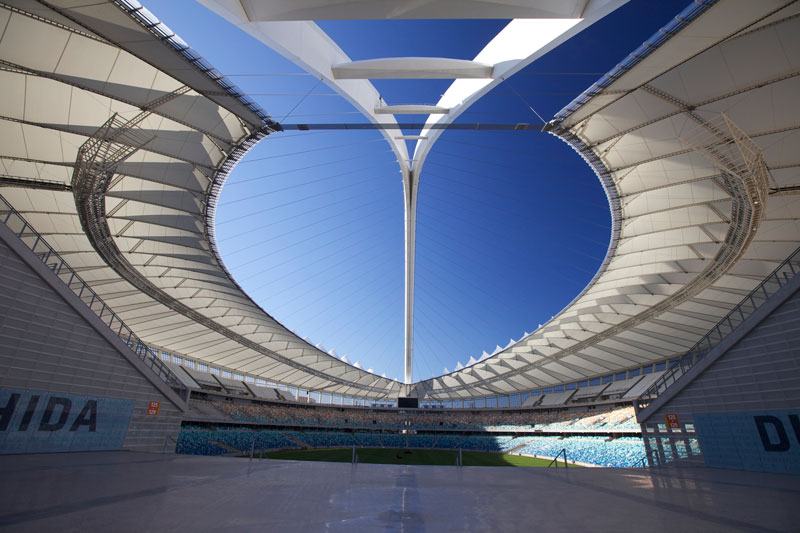 As far as South African buildings go, the Moses Mabhida stadium was one of several built in the major centres around the country for the 2010 soccer world cup, and one of the most recognisable.

Rather than leave it to stand as a white elephant, Durban Tourism have incorporated it into the Durban experience.

It’s used for bungee jumping, cricket, concerts and its famous arch, reminiscent of the Wembley Stadium, is the site of the SkyCar, a funicular that takes one from the north side to a viewing platform at the top of the arch – the views over the city and sea are incredible (don’t worry, you’re enclosed in a glass interior).

Do you know of any other unusual South African buildings worth a visit?