After grinding to a halt at the 67km mark of last years Comrades Marathon, I vowed that I would never, ever run again!  Sunday morning however saw my return to running as I very ambitiously hit the pavement for the 94.5 Gun Run 5km event!  It was a spur of the moment decision (hence no pre registration for us) and after roping in two willing friends we found ourselves walking along the Sea Point promenade to the start of the event at Beach Road in Mouille Point.

The Gun Run started in 1993 and was originally only the half marathon distance of 21km.  The challenge was to complete the distance in less than two and a half hours and therefore to beat the firing of the noon day gun … the Gun Run was born!  The first runner across the line after the noon gun was given the spent shell cartridge! 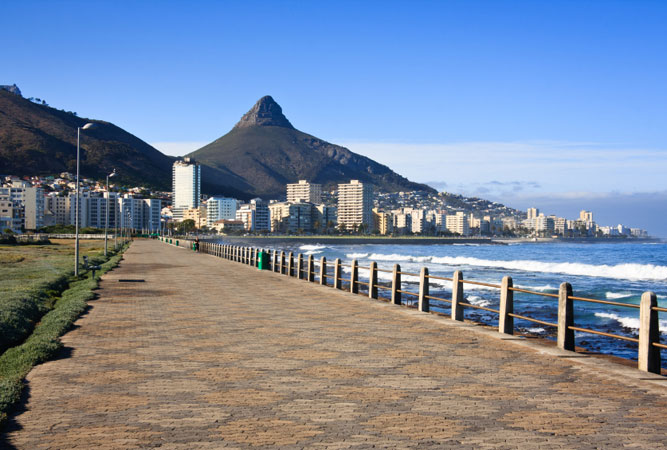 As the popularity of the event grew it became clear that starting such a busy race at 9.30am was becoming a problem.  The 10km and 5km distances were also added to give more appeal to the general public.  The half marathon now starts at 7am with the 10km and 5km events kicking off at 7.30am and 7.45am respectively.

A gun is still a feature; instead of the noon gun a 25 pounder 88mm Cape Artillery field gun is used to announce the start of the races – believe me, it’s loud!

The race supports an official charity with money raised going towards the charity.  The 2009 charity was The Homestead; a non profit organisation in Cape Town.

The popularity of all three events was apparent this year with the Mouille Point and Sea Point areas a hive of activity as runners from all three races made their way to the finish line on the promenade opposite the Winchester Mansions.  It was wonderful to see so many people, and even more importantly, so many children out exercising and having fun!

I managed to complete the 5km distance in 30 minutes and didn’t stop to walk once!  Our post race reward was breakfast at Miss K in Green Point!

I will definitely be back in 2010 – perhaps Ill give the half marathon a bash!