Fynbos, which is Dutch for fine-leaved plants (even though most fynbos is ericoid and not fine), is in high demand. It’s valuable because it is under threat – due in no small part to agriculture, invading plant species, and human development. Fynbos is a totally unique kind of vegetation that makes up 80 per cent of the Cape Floral Kingdom, two-thirds of which are found only in the Cape (nowhere else on earth).

To put it in perspective: Table Mountain alone hosts as many plant species as the UK; all 1 500 species of them. Which makes the Western Cape more botanically diverse than the richest tropical rainforest in South America, according to WWF. And that includes the Amazon… 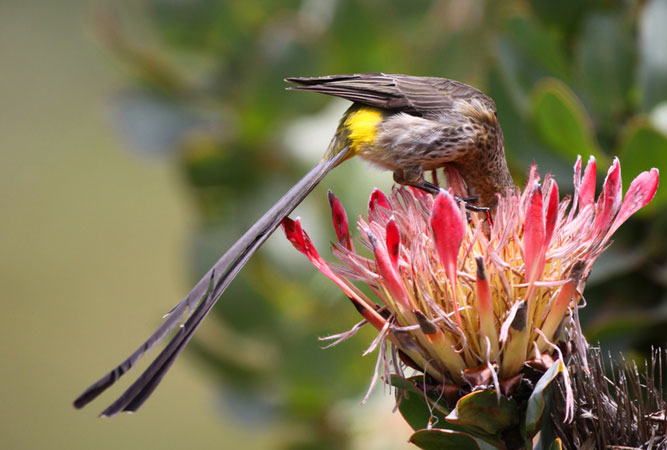 Most of the fynbos is extremely rare and in danger of dying out completely (1 700 fynbos plants are threatened with extinction), which is why fynbos is a UNESCO World Heritage Site, and nature reserves protect it.

You will find fynbos in a 200 km-wide strip of coast that stretches from Nieuwoudtville in the west to Port Elizabeth on the south-east coast. As a floral kingdom, it is both the smallest and the richest.

10 facts you might not know about different types of fynbos:

Strictly speaking not all the plants below are fynbos, but you will find them growing in the fynbos region of the Western Cape. We include them in the broader appreciation of fynbos. 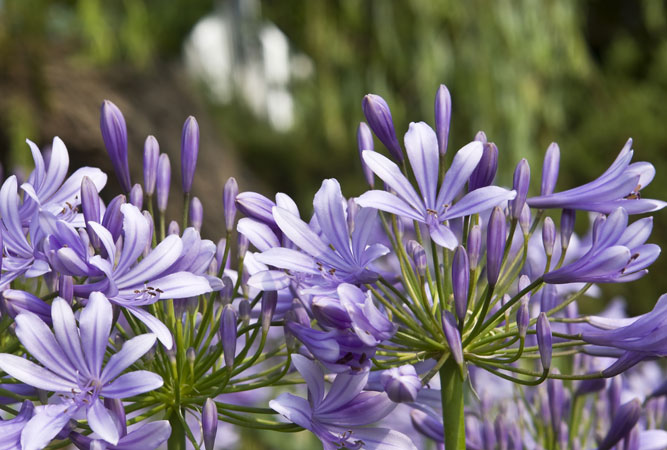 A common enough flower in South African gardens, agapanthus can serve as a fire-break if you plant it close enough to the house. It is also drought resistant and its leaves help relieve swollen feet if you put them inside your hiking boots. It grows happily enough even in poor soils, so is easy to plant and maintain.

2. Buchu is great for hangovers.

Although challenging to grow (plant it after first rains and you will have more luck) buchu attracts bees and butterflies to the garden, and is a natural insect repellent if rubbed on your skin or bedding. To deal with hangovers simply add a handful of the leaves to boiling water and drink as a tea.

is, in fact, a protea and not an almond at all although its fruit looks like almonds and even has a similar bitterness. If you water it well (it needs lots of water) in its first two years, it will grow as high as 8 metres and will attract insects, birds and squirrels to your garden. Don’t eat the fruits though, as they are poisonous unless soaked for a few days first in water. 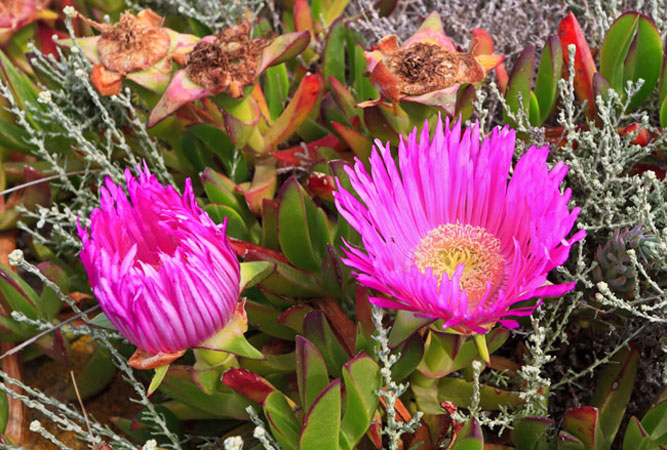 The dried fruit often sold on the side of the road in Cape Town is great for sprawling quickly over undesirable banks and areas of the garden you want to cover. But you might not know that you can eat the fruit raw (bite off the bottom and suck out the syrup) and that drinking the leaf juice will hep with indigestion, toothache, vaginal thrush and earache (although not necessarily in that order). It also helps subdue insect bites and bluebottle (man-of-war) stings.

5. There are 23 different species of honeybush, only 9 of which are used for tea.

Honeybush produces an exciting pea-shaped yellow flower in spring that is a feature for any garden. The plant grows quickly, needs pruning, and looks best when planted in groups at least one metre apart. To make a tea simmer the dried leaves and shoots for 20 minutes.

6. April Fool was the first flower ever collected from Table Mountain

this beautiful flower is also known as the March flower, paintbrush lily and velskoenblaar. It was also probably the first South African flower to feature in European literature. They are bulb flowers and do well in pots. 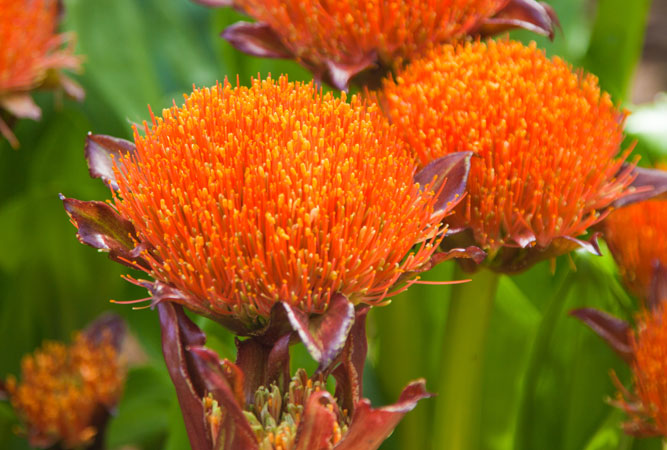 7. There is a rumour that the silver tree

grows only if it can see Table Mountain from its place in the garden, which may explain why they are so difficult to grow. Perseverance pays when it comes to this plant, and if the first one dies, plant another as they need all the help they can get.It depends on the hairs on the leaves to survive. When the air is moist, the hairs collect moisture by standing up. In the process the plant no longer looks silver but green. If it is dry, they flatten again to protect from moisture loss.

8. You can roast the seeds of pincushions to eat.

Not only do pincushions look beautiful in your garden, and in many a bouquet sold overseas, but they attract the sunbird and the Cape sugarbird who love their nectar. In exchange the birds pollinate the plant. To roast the seeds remove the hard shells first, or even eat them raw in salads. But once planted, the pincushion does not like being moved. 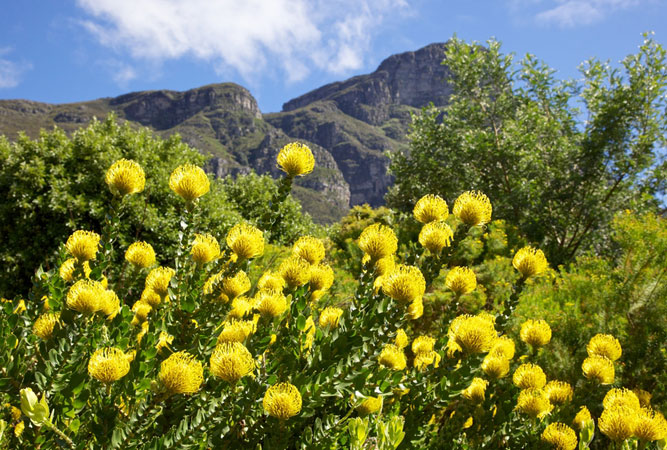 is South Africa’s most commonly grown indigenous water lily. Known a Nymphaea Nouchali, after Nymphe the Greek goddess of springs, this beautiful water lily is also known as a paddapreekstoel (or frog’s pulpit). They are great for ponds, wooden barrels and old kitchen sinks and you can cook or roast the tubers – used by the Cape Malay and local Cape farming communities in curries.

10. Wild garlic’s strong smell keeps moles and snakes out of the garden.

Crush it on your skin and it will keep fleas, ticks and mosquitoes (as well as most humans) away. But its best use is as a seasoning in cooking, or the leaves and flowers are delicious raw in salads. 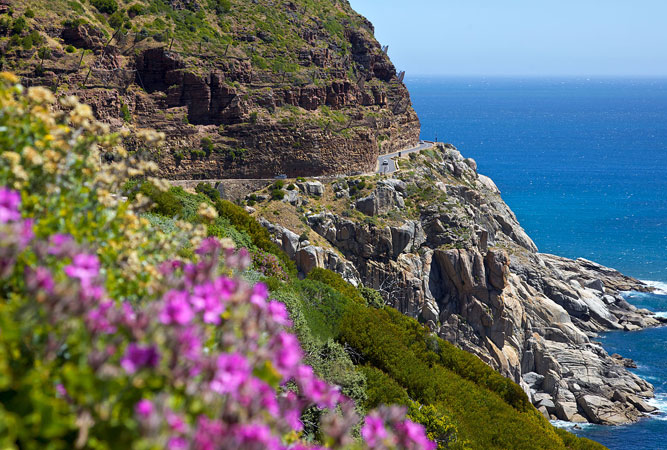