Now reading: 10 Reasons Rhodes Should Be On Your Bucket List Of Towns To Visit In South Africa

Rhodes is a fairytale type village perched in amongst the mountains where time seems, literally, to stand still. Fringed by mountains, fresh air and the calls of swallows and red-chested cuckoos, the unique Victorian-style tin roofed homes, hotel and shops remain as a delightful holiday retreat for those who can be bothered to get there.

Because, if you haven’t already visited Rhodes then no-one has explained that you don’t simply ‘drop in’ to the 1821 metres above sea level village in the highlands of the Drakensberg. Half the adventure involves getting there. If you are a 4×4 enthusiast then a visit to Rhodes is even more intrepid than it sounds because there are eight mountain passes in the area.

(Note: not all eight passes lead to Rhodes, but you can reach most of them from Rhodes, give or take a few detours. The recommended passage to Rhodes is via the gravel R396 from Barkly East).

Admittedly not all eight passes are equal. Only one of them is tarred (Barkly Pass), whilst others, like Bastervoetpad, make challenging driving and a third, Naude’s Nek, is the highest navigable (for a standard sedan) dirt mountain pass in the country, reaching a summit of 2920 metres above sea level and incorporating some of the most incredible scenery in South Africa. 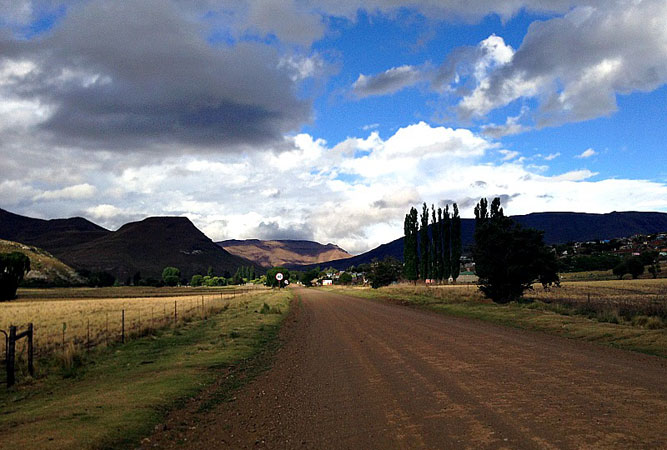 Calling Rhodes ‘historical’ is also not a euphemism for ‘old and derelict’. The entire village is a national monument to preserve its unique almost lost in time character. Rhodes has been up in these mountains since 1891. The community originated as a result of farming in the area, and the founding of an NG church built by the reverend already servicing Lady Grey (at the base of the mountains) who travelled from farm to farm on horseback to minister to his far-flung flock.

By 1895 Rhodes was flourishing, with enough children to boast the biggest school in the Barkly East district.

Farming later declined and during the late 1960s hippies moved briefly into Rhodes in search of alternative lifestyles (it is not difficult to imagine that these tree-lined streets and quaint cottages easily adapted themselves). Thirty years later, as the hippies moved on and the town began gearing itself to tourists, Rhodes was proclaimed a national monument and conservation area to try and conserve the town.

Today, whilst a few stalwarts live permanently in Rhodes, most of the homes serve as holiday retreats or guest houses. The surrounding terrain is rugged and popular with outdoor adventurers – flyfishing, birding, hiking, skiing in winter, and MTB riders, in particular.

The town easily serves as a base at any time of the year, its beauty and timelessness an easy retreat from the world. 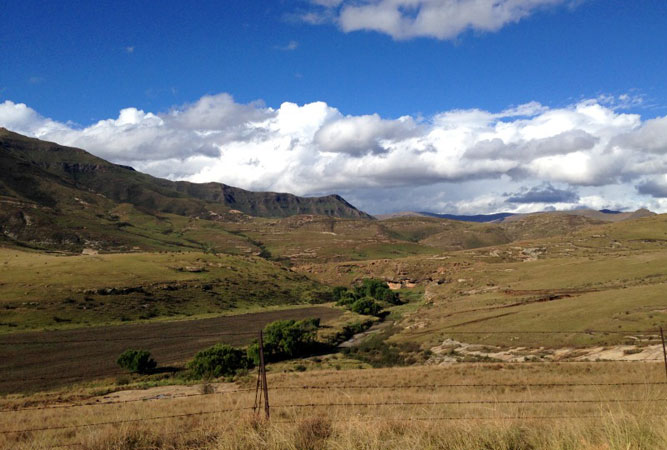 Here are 10 reasons why you should visit Rhodes:

Rhodes is incredibly quaint. What’s more during summer, because of its altitude, it does not get too hot (even during a drought the area remains relatively green), and during winter you might even get snow. Certainly it serves as a great base from which to visit Tiffendell for a snow encounter and skiing on the slopes.

Rhodes’ architecture is Victorian era meets compromise; both charming and unique. Whilst the general tin-roofed Victorian architecture dominates, people had to use the materials available to them. As a result town’s homes vary from grand traders’ residences, to flat-roofed ‘kerk-huisies’ dotted in amongst the tree-lined streets. 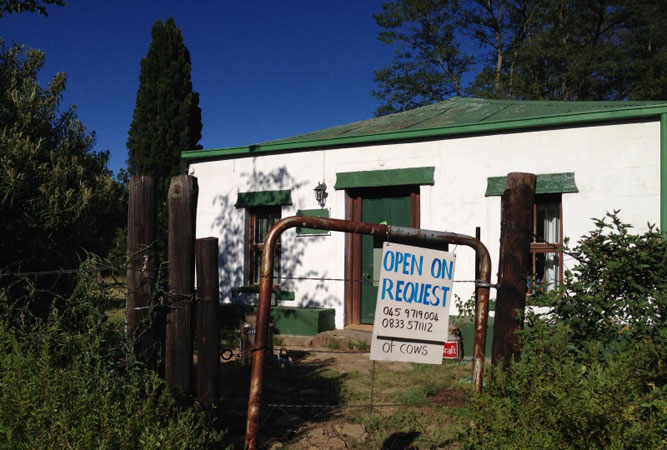 Rhodes lies at the heart of what is called the ‘8 passes challenge’, a challenge for the 4×4 community to drive any, or all, eight of the passes that link Rhodes to other villages in the Eastern Cape. These include: Naude’s Nek, Carolisleshoek Pass, Volunteershoek Pass, Lundean’s Nek, Joubert’s Pass, Otto Du Plessis Pass, Barkly Pass and Bastervoetpad Pass. With the exception of Bastervoetpad (which is a serious test of anyone’s 4×4 mettle) one can do most of these in a 2×4 vehicle with high clearance.

Rhodes is ‘above the tree line’, which means that it lies high enough that no large indigenous tree can survive up in the village. Yet Rhodes is filled with beautiful, big old trees brought here as the original settlers planted exotics. Still standing are Normandy poplars, oaks, pines, cypresses, cedars, willows, pears and more.

But many of these trees are reaching the end of their lives, others have died due to disease. Rhodes Tree Project, started in 2008, plants new trees in the village; a new generation of trees, not only to beautify the town but also as a way for people to offset their carbon emissions. Stop at Tourist Information to find out more. 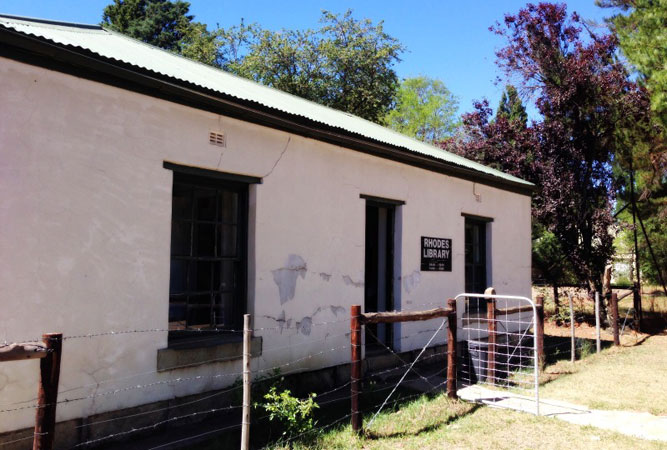 Rhodes’ annual Stoepsitfees, for three days in February, is well worth attending. The essence of the festival is to get to know local residents by arriving to sit on their stoeps. It’s not as awkward as it might sound. For despite no formal programme and the intimidation of simply arriving on someone’s stoep to find yourself without anything to do and say, the locals welcome you warmly.

You’ll be able to drink anything from tea to tequila, enjoy a snack and engage in age-old stoep like traditions like knitting (the squares, which are then made in to blankets, are then sold for auction at the Wild Trout Flyfishing Festival every March). It’s so popular that it’s grown from a two-day to a four-day event.

In the area around Rhodes and Barkly East are a series of historic holkranse – highly erodible sandstone caves used historically by the people inhabited the area – from San to today’s commercial farmers. You can visit one of these on the Caves Farm, where the holkrans has been in use for 120 years by the Steyn family.

Originally used for milking cows morning and evening, the cave, which is big enough to take about 1 000 sheep, is today used for shearing and as a store room for the owner’s poplar wood furniture. You can view San rock art on the farm as well. 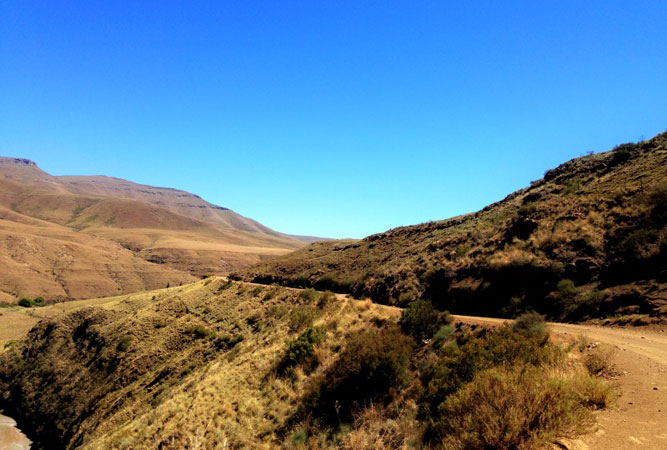 Hiking around Rhodes is popular and includes the well known Ben Mac Hiking Trail. Most of the trails are on privately owned farms, like Rhodes Rambles on Den Hagen Farm, or you can hike on what is known as ‘The Common’ – the original farm on which Rhodes was established, Tintern Farm, south of the village that includes brickyards, a shooting range and dams. To find out more about hiking in Rhodes, visit the town’s Information Centre (you can’t miss it). 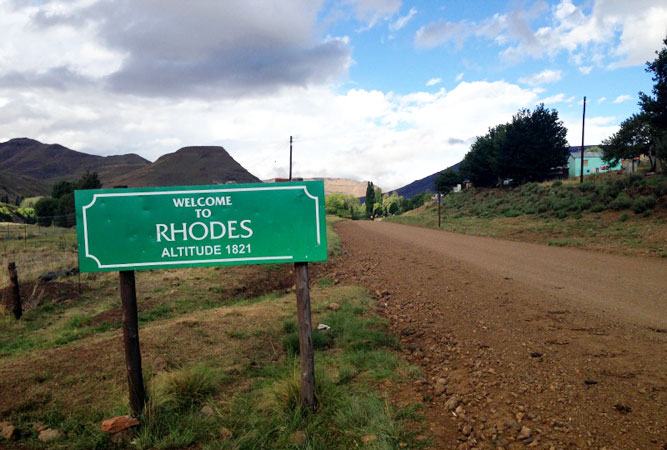 Irene Walkers ceramics include beautiful agateware (decorative ware made from partially blended dark and light clays), bowls and plates in a mixture of three local clays, with unique designs. The products reflect the texture and colour of the surrounding rocks, mountains and plants. For pottery or ceramics classes contact Walkerbouts Inn.

Fly fishing around Rhodes is one of the major draw cards to the area. Known as the Epson Wild Trout Festival, it’s been running since 1996 and offers the village’s rivers, streams and dams to fly fishing fanatics who descend on the town for three days and four nights of fishing and fun. There are guides on hand to help with lunch packs, dinners and guidance.