Bagamoya Wildlife Estate lies roughly 35 kilometres outside of Bloemfontein in the direction of Maselspoort. Out here the grass is long, the trees reminiscent of the bushveld and the skies a vivid enough blue to evoke many a novel depicting the beauty of the wild plains of South Africa.

Today’s open spaces are limited. Many of them, like Bagamoya, are closer and closer to cities and more like animal enclosures than they are game parks or farms. Being rather averse to zoos at the best of times I find I have mixed feelings on entering the estate. Two large, modern and fenced enclosures house two huge lionesses and a male lion, closest to the gate. One lioness is separate from the other two. 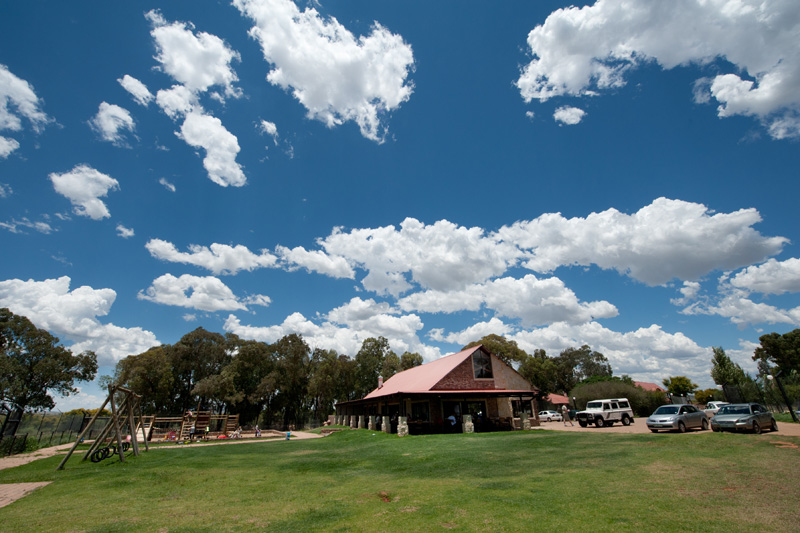 Above them, up a series of steep steps, is a viewing room where we’re greeted by a stuffed lion, its magnificence very obviously diminished by the taxidermy process. The enclosures below us are little bigger than those experienced in a zoo, although they lack the paltriness some of these institutions begin to exhibit.

And we’re lucky. It’s feeding time and incredibly interesting to watch. The male’s back ripples with muscles I didn’t even know lions had. I’m intrigued as to how this musculature is maintained in such small enclosures when the lions very obviously do not hunt for their food.

The male, I later discover, is Bongani, brought to Botha and Sharine Barnard who run Bagamoya Estate in 2002. He’s the reason for Bagamoya – that and their passion for lions. Which came first isn’t entirely clear. On the verge of dying, Bongani was placed in their care for them to nurture.

Today, although far sighted and probably a little small when compared with other lions his age, he has managed to produce many offspring and is nine years old. His owners describe him as incredibly soft hearted, a lion who will chat to you and lean up against the fence for a stroke. 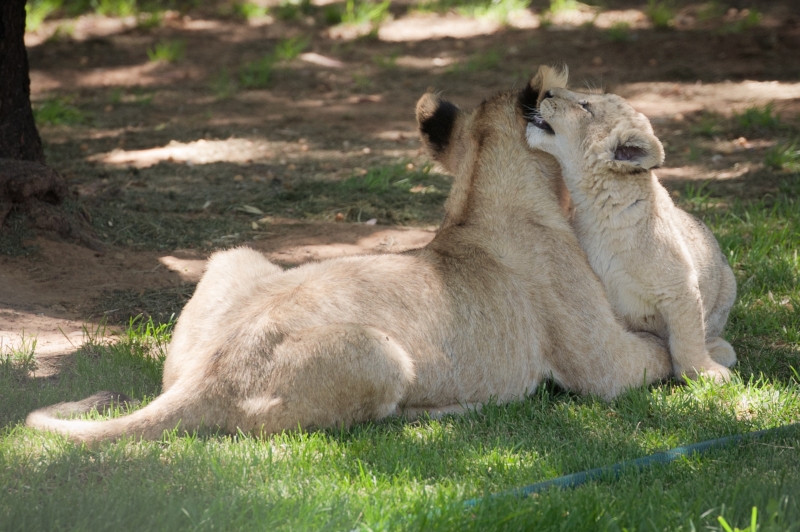 There are cries of ‘ag, cute, aren’t they lovely’ as we head down the steps, having only seen the back side of Bongani, and little of his soft nature as he gnaws on the bone that had been thrown over the fence prior to our arrival.

Just around from the enclosures is the Botha’s home, their ‘garden’ a veritable breeding pen for lions. And dogs, it seems. At play in the garden are not only a series of very young lion cubs, their cheeps more reminiscent of birds, but also roughly five fox terriers and two children.

None is bothered by the others. In fact, the dogs and lions are quite content to run along side by side and to play together. The children, obviously Botha and Sherine’s, are in turn so used to the lions and dogs they’re not even slightly disconcerted by them. The situation is so ‘normal’ that they don’t even feel the need to run after them and constantly pick them up, as children do. It’s an unusual tableau to say the least.

Separated by only a fence, in an extension to the garden, is the home of a gang of slightly bigger lion cubs. They’re still deserving of the exclamatory ‘ag, cute’, but only just. Don’t let these guys fool you. Put your child closest to the fence whilst strolling past, and they’ll stalk him. Make no bones about the fact that that if the fence were not there, your kid would sustain more than a couple of scratches. Asleep in the shade of the bushes are a series of great danes. 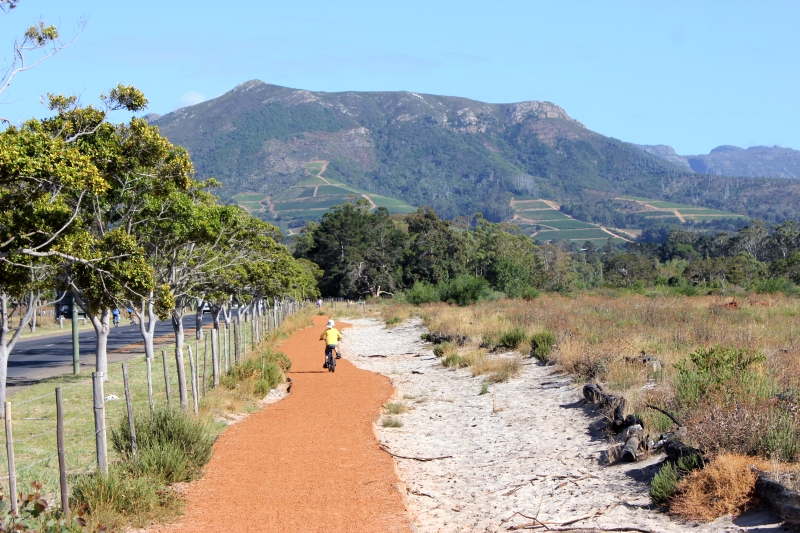 I’m intrigued. What’s with the dogs?

There is now a rush on. Despite being close to a series of public holidays, or perhaps because of it, there are a lot of visitors to Bagamoya. And the feeding is about to begin. Feeding happens in the enclosure in front of the restaurant, aptly named ‘Lioness’. Inside its cool interior, the walls are hung with large prints of photos of the Barnards in various loving embraces with their lions and tigers.

Finally a hush falls over the crowd already gathered at the enclosure. I’m suddenly aware that there is a man in there. Is he mad? Having watched the lions pace for the last twenty minutes in anticipation of their food, he’s now entered their space.

My hat firmly on my head, as it’s incredibly hot out there, I make my way to the fence. Botha begins to speak.

He’s charismatic. And over confident. You have to be to begin your talk with a comment about being the dominant creature in the enclosure, likening his position to a man in his household, whilst petting both the lion and lionesses that wind their way around his legs. I listen to the titters amongst the women next to me, whilst the men appear to grow by at least an inch apiece, and have to remind myself that I’m in the Free State and not the Cape anymore. 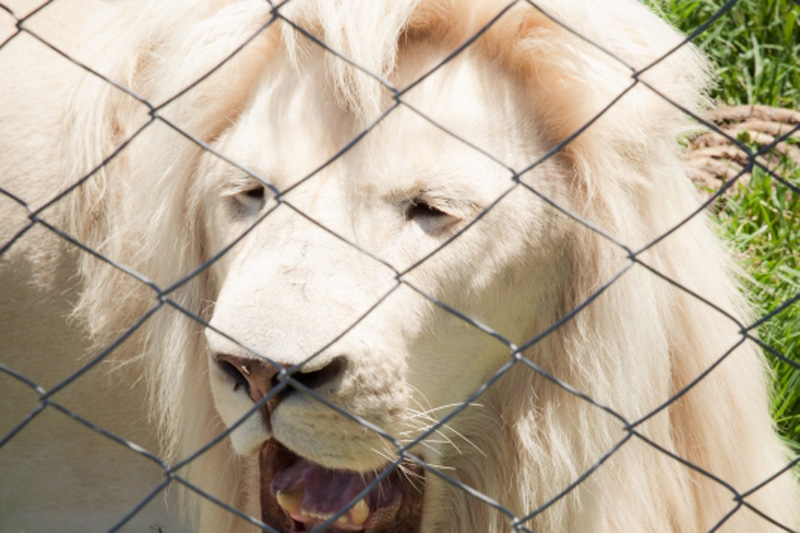 Sexist comment aside, it’s uncanny to watch the lions around him. Take the context out of his statement and you realise that the state of play behind the fence is exactly what he says it is. He is the dominant male in there. The lions very obviously adore him.

But how? How has he managed to subject the lions to his dominance? This is not the natural state of things. Botha explains how he uses the dogs for this. The dogs are a reinforcement of the behaviour he wishes the lions to exhibit. By placing his cubs in with the dogs from a few weeks after they are born and raising them around his house, the lions learn that he is the dominant male, and behave in similar fashion to the dogs.

I now also discover that the reason the lions are in such great shape is because they’re fed only once a week. People are shouting out questions – why are some of the lions white, why isn’t he in with the tigers in the next door enclosure, why are the lions so tame? Why don’t they charge entrance fees?

Botha fields the questions with the air of an expert. He’s not standing in amongst the tigers because unlike lions who have the courage to attack you face on, tigers usually take you from behind, and he’s taking no chances. 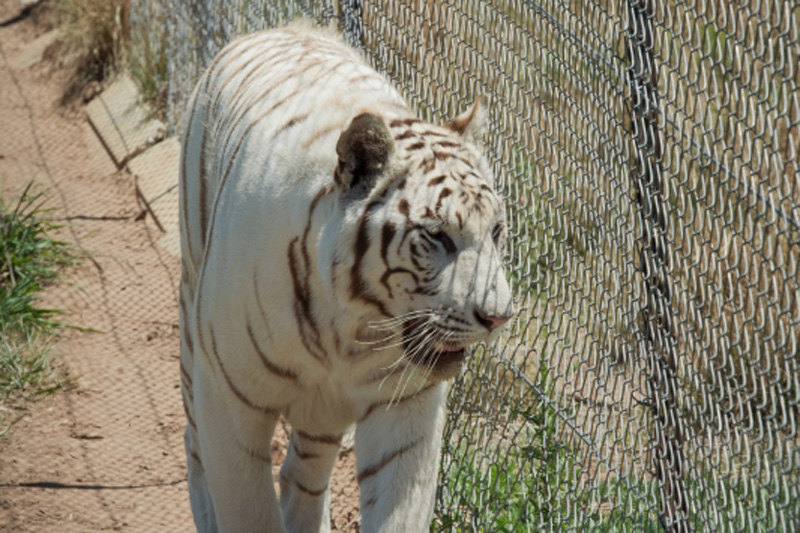 The white lions are the result of a recessive gene, they are not albinos. It isn’t clear from the way Botha answers whether or not he has bred them specifically, or whether their emergence in his pride of some 45 lions is fluke. He also manages not to adequately answer my question on whether he’s breeding them for canned hunting trophies or zoos, although he emphatically denies the former.

A lioness will come into heat a few weeks after her cubs are taken away from her, which must mean, I ask, that there are constantly cubs, and yet I don’t see that many of them. How does Botha curb the population?

His lionesses are on contraception. Whilst I’m mulling this one over, he continues to explain that in the wild, a new lion in a pride will kill any products of his rivals, and for this reason lionesses are in heat often.

And whilst they don’t explicitly charge entrance fees, the understanding is that visitors will use the restaurant – both sadly staffed and inadequately managed. 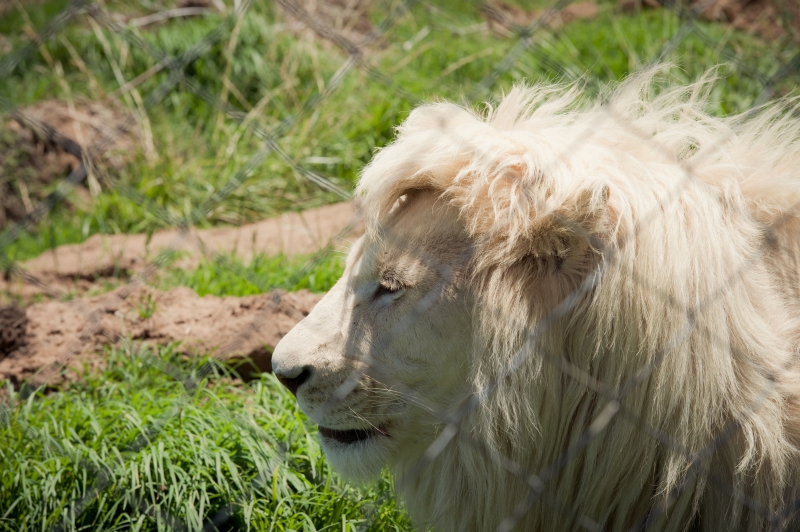 Whilst not disputing the Barnard’s love of animals or the obvious joy there is in being able to view lions up close like this, I am disturbed by a plethora of questions. I wonder how kind it is to breed wild animals for a life of captivity or perhaps even for canning?

And how ethical is it to breed lions in one’s home as one would dogs? To train them to regard a human male as their master? They are not domestic animals. The ‘loving home’ the Barnard’s provide is nothing more than a zoo at best.

What happens to those lion cubs, trained from birth to regard man as master? Do they go to loving zoos too? Can the Barnards control what happens to the lions they sell?