Now reading: The Kouga Wilderness – experience it by land or by water

I know someone who has kayaked along the Kouga River. He describes his trip as a complete escape from civilisation and something you have to do once in a lifetime. Camping on the banks of the river, which leads through isolated wilderness the beauty of which will capture your heart and enslave you to the memories of what it is to be alone on a river, is now top of his list of the incredible getaways he has experienced (and he’s experienced a number).

The Kouga Wilderness is probably best explored this way. It hasn’t been described by some as ‘inhospitable’ for nothing – tangled ravine forests, sheer rock faces that scream to be abseiled, whilst beautiful from the tranquil, relative safety of the river, are rather arduous on foot. 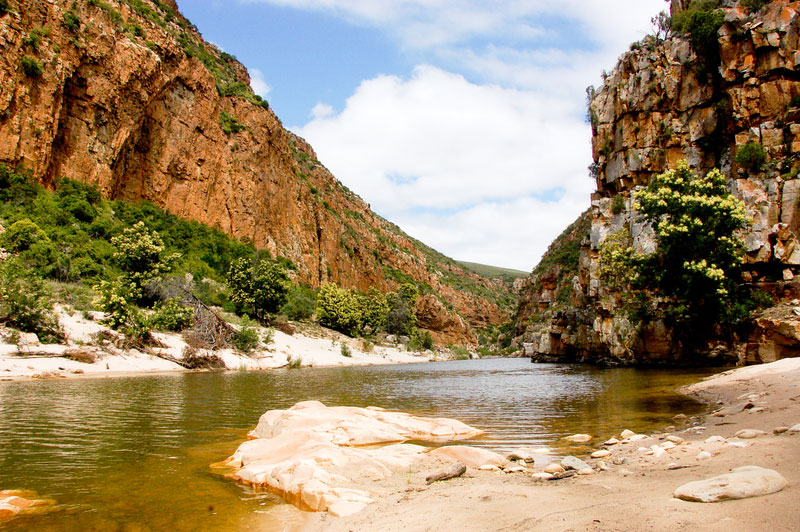 The Kouga Wilderness lies in the incredible Kouga Mountains on the edge of the Baviaanskloof, advertised as the real outdoor experience, and where you go to climb rocks, kloof, fish, watch birds, hike and adventure on 4X4 routes. Those who go want only to return and many of us simply hanker for but one visit.

You get there from either Port Elizabeth of via the N2 from Cape Town, which then connects to Route 62, and ultimately the lower reaches of the Kougaberg. To place it more squarely in the mind, it lies in the mountains north of Joubertina, partway between PE and George, filled with waterfalls, forest pools, wildflowers, sheer rock faces and the odd farm for those mad enough to want to live in the middle of nowhere (or just about).

Thankfully there is also the odd campsite and getaway on these farms (see Grootnek Guest Farm), where you can share in the stillness, incredible scenery and rugged mountainous terrain that is part of the larger Baviaanskloof. Despite the odd quad bike and 4X4 trail animals are returning to the area due to the work of the Baviaanskloof Mega Reserve, a World Heritage Site and the largest protected area in the country, with no less than seven biomes filled with birds and animals.

As my friend – the one on the river – described: there is a feeling to parts of the area of a complete lack of disturbance, as if no man has ever been this way. Not to be outdone, I began exploring to find a trip that we might take to experience this incredible destination and have come up with a couple of alternatives, depending on whether you want to do it by land or by water.

(and raise money for conservation whilst you’re at it)

The corridor describes a strip of land connecting two protected areas, in this case actually linking three mega-reserves – the Garden Route National Park, the Baviaanskloof Mega Reserve, and the Addo Elephant National Park. The idea is that a corridor initiates and encourages a greater diversity than cordoning an area off to protect it behind fences.

Eden to Addo is the migration path of the ancient elephant in the Cape. I know I said that there were two options to finding your way in and through the Kouga Wilderness, but in the Eden to Addo case, you can actually choose whether you want to cycle or walk it.

The 550 kilometres Eden to Addo challenge, during which you also raise funds for the conservation of the corridor, is not for sissies. I looked instead at the hike, mostly because you can do this as a slackpack version, with only your day pack and your lunch, which does little to detract from the fact that it’s an 18 day hike!

The first six days of the hike take you from the indigenous forests of Knysna on the Garden Route, through what is known as the Garden of Eden. The hike traverses through the Tsitsikamma National Park for two days and then finally enters the Kouga Mountains.

The next six days lead from the Langkloof valley into the foothills of the Kouga mountains through the hidden wilderness that is the Kouga Wilderness and the Baviaanskloof (the reason for the hike). Days 11 and 12 you can even expect to meet rhino, buffalo and kudu along the way.

The final six days of the hike, which raises money for conservation, a wonderful incentive should you find yourself flagging, leaves the central Baviaanskloof and heads up the plateau and down into the Cambria valley and on, ending deep in the Kabouga region of Addo. There will be reason, at this stage, to celebrate.

The hike costs R20k but includes all meals, camping fees, guides, permits, safari tents and transfers. And it makes no apologies for being rustic. Despite this the wilderness and the sheer endurance of the incredible hike is an unforgettable experience.

There are a couple of companies that will guide you up the Kouga River, one of them based in Storm’s River. The idea is that you paddle through magnificent gorges with only black eagles and baboons to accompany you, before pulling off on one of the sandy beaches that periodically present themselves en route, to sleep under the stars.

By around day three you will be deep enough into the silence of the Baviaanskloof to leave the river and overnight on one of the farms where you can hope to spot game and spend the night surrounded by the sounds of the wild. Day four will return you by car to the start of your expedition.

To be able to partake in these wonderful few days you will need a certain amount of perserverance and chutzpah – three or four days paddling in isolation soon separates the determined from the woosies (those scared of spiders, and children under the age of 10 don’t qualify). And one of the companies who offer this form of the adventure through the Kouga Wilderness claims you do not need boating experience – that these skills can be acquired within the first day on the river.

The main reason for the expedition is to locate the isolated parts of the wilderness environment, to get the adrenaline going, and to experience what it is to lose yourself in the full immensity of the wilderness.