Now reading: Il Postino Pizzeria – A little bit of Italy in the Midlands

Although it opened its doors in the Natal Midlands just over two years ago, Il Postino Pizzeria was a restaurant that was unfamiliar to me, that is until I decided to pay them a visit for lunch last weekend. The drive from Pietermaritzburg to Dargle in the Midlands was a familiar one, except that on this occasion I had to take the Dargle Road off the well worn R103 rather than proceed straight ahead as I had done so many times before.

Even though the route may have been slightly different, the scenery was, as always, stunningly beautiful. Un-seasonal rain had left the Midlands countryside as green as ever and set against the backdrop of a clear, blue winter sky it was as refreshing and welcoming as always. After roughly 30 minutes on the road we reached our destination where restaurant manager Bjorn and his friendly staff greeted us. 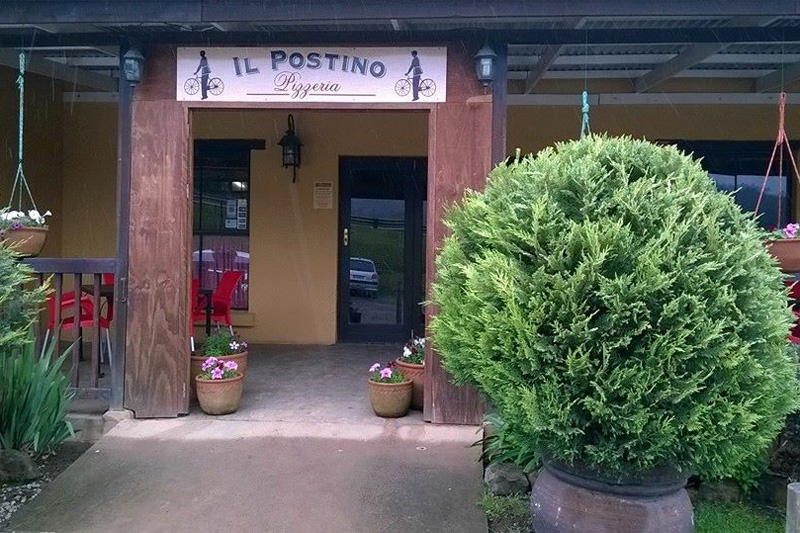 The menu at Il Postino contains everything you’d expect to find at any good Italian restaurant. A wide selection of expertly prepared Insalata (salads), pizza’s and pasta dishes are available at very affordable prices and with so many variables to choose from, it wasn’t easy for friends Curran, Mary-Anne, Cally and I to decide on something.

I eventually opted for a wood-fired Regina al Pollo (chicken and mushroom) pizza, which I thoroughly enjoyed. The portion was more than generous, the base light and crispy, the topping filling and tasty and, at just R68, the al Pollo unquestionably represented value for money. Curran also decided on a pizza, selecting the Margherita (Napoletana base, Mozzarella and Herbs), which he really liked, describing it as “tasty and definitely worth R45”.

Mary-Anne and Cally decided that a pasta dish would be more to their liking, with both of them selecting the blue cheese sauce with Gnocchi (a type of thick, soft dumpling). Mary-Anne found the dish too her liking as did Cally, although the latter remarked that it “could have done with a little more sauce”.

For dessert I had the ‘Saucy Chocolate’ (R28), a type of chocolate sponge cake topped with a dollop of ice-cream that was sinfully good, while Mary-Anne opted for the ‘Chocolate Mousse’ – a special offer for the day at just R29. She absolutely loved it and after sampling some, I had to agree. Delicious!

Despite being located in reasonably close proximity to a number of competitors, I have no doubt that Il Postino has a really great future. The service was good, both in terms of the friendliness of the staff and their excellent product knowledge, and the food was well presented and carefully prepared. Furthermore the pleasant ambience and simple but effective décor were perfectly in line with the restaurant’s theme and unlike similar establishments; Il Postino is easily accessible off the main road.

I also really liked the fact that petrol was available on site in the event of me needing to fill up my tank – something which I have never seen anywhere else on my travels in the Midlands of KwaZulu Natal. To sum up I have no reason not to give Il Postino Pizzeria a big thumbs up. Owner Sergio Guerrera has really put together what I feel is a winning combination of style, service and quality and I wish him well for the future.