Aside from the fact that it feels as though one drives forever from Durban to get to Mkuze Game Reserve along the N2, it was this journey that prepared my mind and soul for the necessary unwind that must first take place before spending any time in a reserve.

And by that evening, I could appreciate the transition that took me along the northern coast of KwaZulu Natal into the heart of Zululand for what it was – a journey into stillness countered by the wild and untamed beauty that is the Zulu heartland … 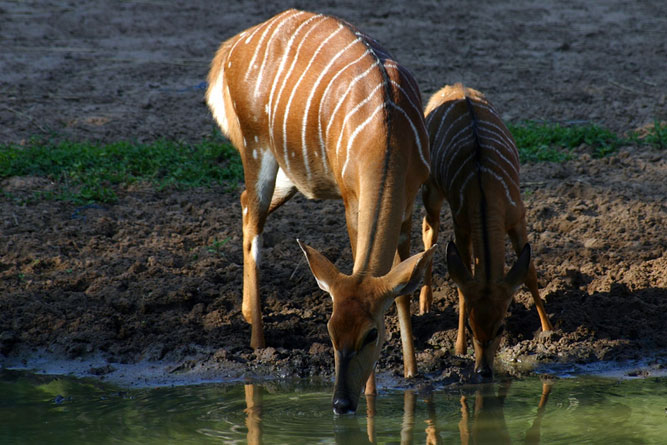 Whilst you can fly into Richards Bay or even Ulundi, my advice is that you don’t. Rather let the sticky, muggy and dense atmosphere insidiously take hold of you during the drive, at the same time as the Elephant coast and its wrenching beauty impress themselves upon you.

Mkuze Game Reserve, not to be confused with Mkuze Falls private Game Reserve, makes up the northern portion of the iSimangaliso Wetland Park, a World Heritage site. Mkuze Game Reserve is 40 000 hectares of some of the most splendid natural beauty available. Obviously a stay here depends on you and your holiday needs, but there is something about the untamed beauty of this coastline that is fascinating and an attractive option at any time of year.

This part of the coast has been a protected area since 1912. The Mkuze River that wends its way along the eastern and northern borders is a huge attraction for birds of all shapes and sizes, and one of the major draw cards to the reserve. The eastern boundary is hugged by the Lebombo Mountains, which provide a further wooded and swamp habitat, and Mkuze is also the home of a sand forest, a rare occurrence anywhere.

But of course, one is here mainly to see the animals, and see them we did. There are various options for accommodation in Mkuze that mostly fall just outside the reserve. There are not a terrific number of places to stay within Mkuze. Mantuma Camp, where we opted to stay, is a series of safari tents and chalets, Umkhumbi is a tented bush lodge, and Nhlonhlela Bush Lodge is the most luxurious of the options.

You can camp in the Emshopi camp ground as well, but we opted for the tented Mantuma, rather than staying on a bordering game farm. Interestingly, Mantuma camp closed briefly last year when the boreholes in Mkuze dried up, but it’s open again, and has to be one of the best such camps around.

We were set up in self-catering Tented Safari Camp that has ten two-bed and three four-bed units available, each with its own en-suit bathrooms (and yes, there is running hot water, not that you need it most of the time) and an open plan kitchen.

The tents are really nicely furnished (obviously this is not luxury camping, but it’s more than one needs when getting back to basics in the bush). Best of all is that great care has been taken to make sure that the tents blend in with their environment.

And may I just interject with a suggestion. Take a torch! Between us, we managed to forget this one obvious and rather imperative item. Nights are dark. Very dark …

And there was plenty to do. Our days were easily filled with lazy mornings, followed by drives through the reserve – you can self-drive Mkuze. We even tried one of the guided game walks, which I can highly recommend. We met up with our guide at 6am sharp, despite its being rather difficult to emerge from our tents quite so early.

The park was alive with bird calls, and because it was so early, and most of our party was prepared to uphold the ‘quiet if you want to see anything’ rule, we managed to witness quite a bit – and it’s that much more amazing on foot. 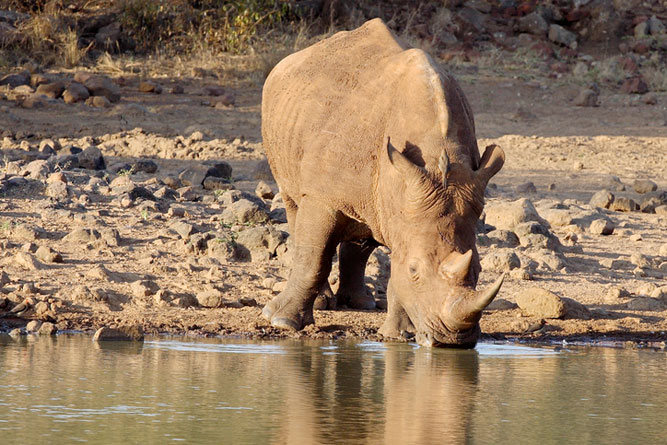 That morning revealed a couple of warthogs, upon whom we stumbled close to the northern Nhlonhlela pan, where we managed to sight a hippo returning to the water, where they tend to spend most of their days. The pan was relatively quiet that morning, with only a handful of pelicans and a variety of ducks and geese.

But the highlight was undoubtedly stumbling upon (if one can stumble across such huge beasts – I still battle with how we managed to get so close without their knowing) a small group of elephants! We were allowed to watch their morning ablutions without interruption, and, possibly because they knew we meant no harm, they unabashedly romped in the mud, spraying themselves and one another with bursts of water.

There are three other pans – Kubube, Kamasinga and Kwamalibala – all of which have game viewing hides, which you can enter on foot having left your car parked nearby. These waterholes are great, particularly in the late hours of the afternoon when the heat of the day has started to wear off and animals feel the urge to quench their thirst.

In this way we saw a number of antelope, including kudu, giraffe and even a rhino, which someone later explained was a black rhino (although he was in the distance and didn’t appear too keen on entering the fray) – the reserve is home to both white and black varieties. We didn’t manage to spot any cheetah. They are more elusive and you’re lucky if you can sight them.

The highlight was the Nsumo pan, which has been nicknamed the ‘king-size water birdbath’ for its popularity with any number of water fowl.