So what do you do in Durban when it’s raining, a bit cold and the sea is rough?  We went to Durban with the intention of sunning on the beach, getting to catch some waves and enjoy the coast.  But that was not to happen in the miserable weather.

Before despair set in, I found out that South Africa’s number SUPPing Champ, Justin Bing, was in Durban at Xpressions on the Beach store and was keen to give us a lesson out on the canals. 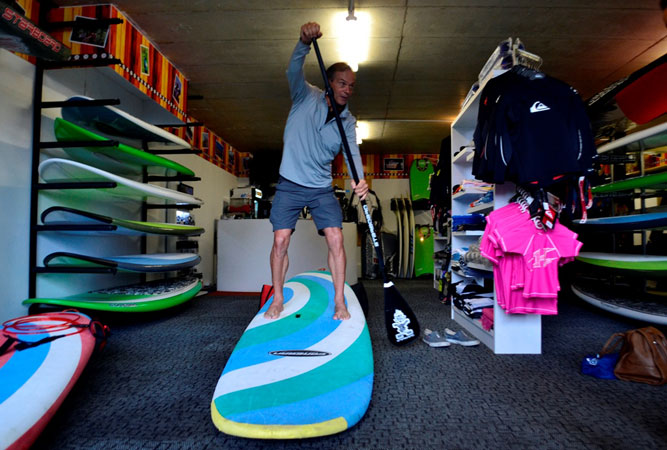 Having won many accolades in the longboarding and Stand-Up Paddle boarding world, Justin Bing recently became SA’s SUP Champ in 2012.  He said he was based in Durban for now to introduce and get SUPPing going in the area.

Even though I had SUPPed before, we were keen on getting to know the basics and KZN’s SUPPing Race Champ was there to give us the do’s and the don’ts. He demonstrated the right stance to have whilst on the board- legs slightly bent in the middle of the board with your upper body and hips doing all the work to get your paddle through the water.

The paddle should always be in a position where it resembled a hand being cupped outward and your hands should switch positions as you move the paddle between your left and right-hand side. 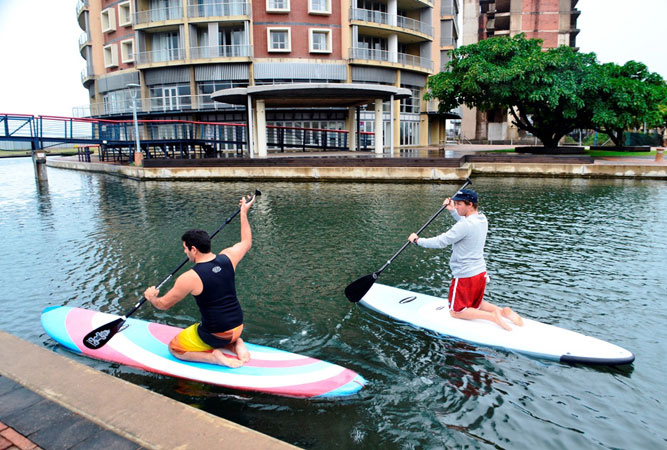 Once we had watched and observed indoors, it was time to head out to the canal with Justin. Slowly we got onto our boards, tried to get initial balance and began paddling forwards under the bridge.

Once I had paddled successfully for the first few minutes, Justin assured me that I was not going to fall in.  This was quite a relief as he had mentioned that there were quite a few big fish below the surface.

When it comes to Beginner lessons they always take students out on the canal where it’s calm and flat or out into the sea just in front of the lifesaving club. 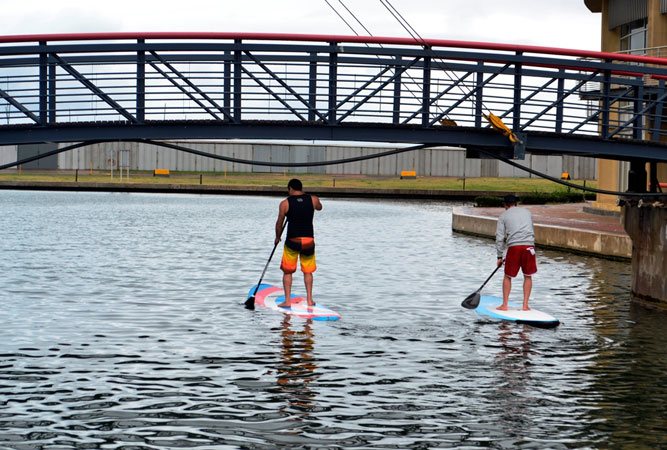 We paddled in the light drizzle down towards UShaka Marine World and he pointed out the area behind the net where hammerhead sharks were kept. Whilst the guys were keen to get closer and take a peak in on that side, I had no qualms staying far away lest I should topple in on the shark side of the net.

SUPPing is truly one of the most fun things to do on water.  I could feel so many of my muscles activated as I tried to maintain balance and move my upper body to paddle.  Justin explained that it is a great way to experience the water without being inside it, great for families and people of all shapes and sizes and helps cultivate a strong core. 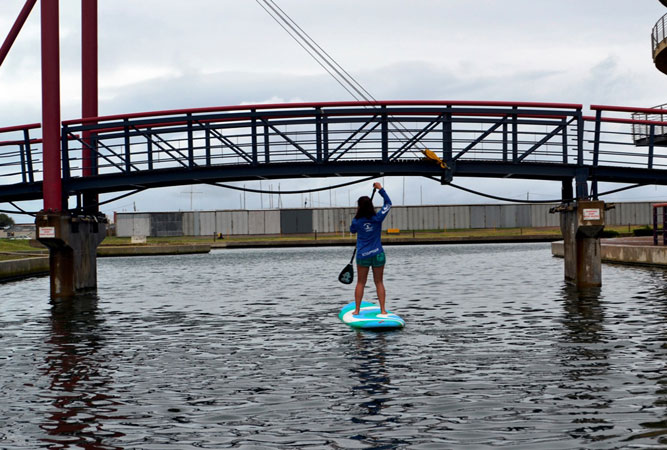 If I could afford a board, I imagine that it’s the kind of exercise I really would enjoy doing daily.  So if you’re in Durban, go out and visit them for a lesson ( private or group) or come down to Cape Town on Wednesdays for the Down winder from Milnerton to Big Bay where you can catch the wind swells and travel along with it.