A visit to Nan Hua Buddhist Temple in Bronkhorstspruit – There is no greater peace than contentment. The best reward in life is peace, something that cannot be given to us by the Buddha or any God. We need to create the conditions and environment for peace within ourselves.  The key to peace is contentment.   (Ven. Master Hsing Yun)

I’m standing in the vast reception area of the Nan Hua (flower in the south) Buddhist Temple reading various meaningful passages by the Master Hsing Yun, the founder of the Fo Guang Shan Buddhist Order … 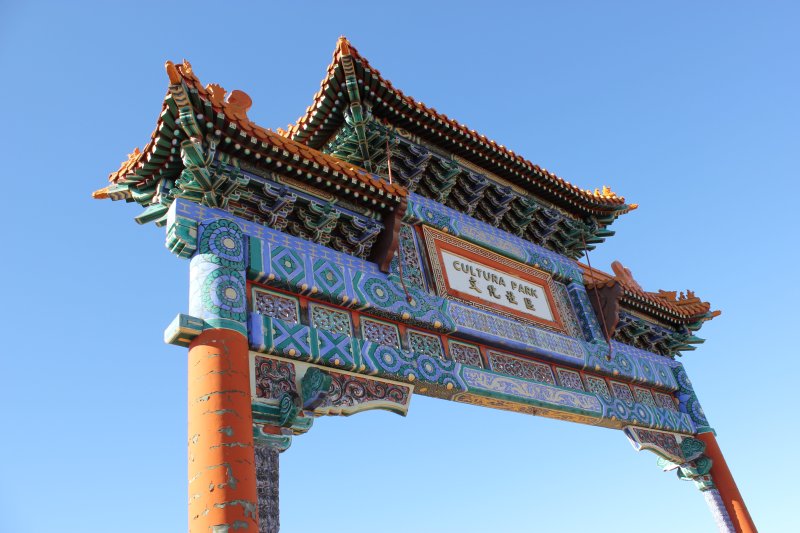 The temple, which is actually a village that takes up an entire suburb – give or take a few houses built by those who don’t mind sharing their neighbourhood with Buddhist monks and daily Buddhist comings and goings – makes one feel as if one has flown into historical China, apart from the surrounding landscape that is a typical highveld winter, the brown grass a tribute to lack of rain.

One is immediately stilled by the atmosphere in the temple. It seems to work a kind of magic. A friend of mine would say this was because the building was filled with sattva, a Sanskrit word, which in its barest form means ‘luminosity’ but refers to a certain clarity, serenity and harmonious balance that occurs in mind and attitude.

Whatever it is, I am content to spend time here in the silence. Only in reception are there murmurs as people come and go past the little shop that sells various Chinese Buddhist trinkets and curios to which my son is immediately drawn, as his grandmother has given him R20 to spend. Rather a Buddhist temple than a sweet shop. 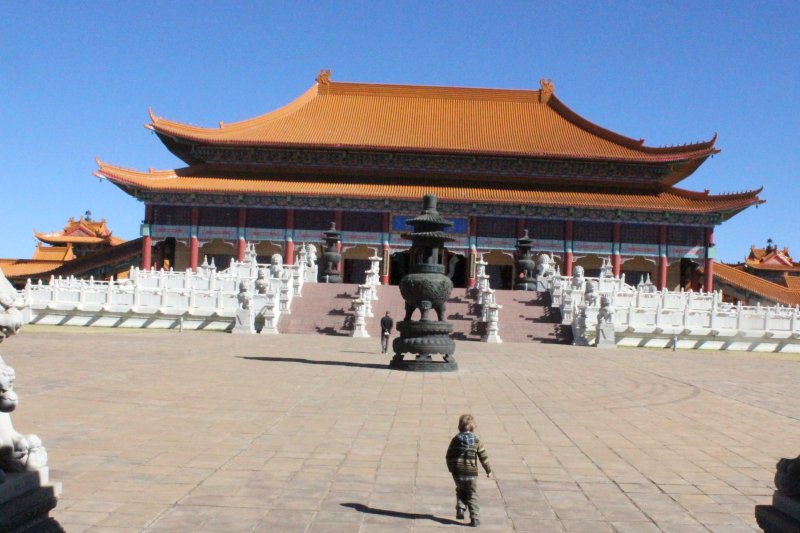 Through the doors on the other side of a quadrangle comes Buddhist chanting. There is a meditation in full swing in the Kuan Yin Shrine (the Great Compassion Shrine), and a series of shoes are lined up outside. I itch to take photographs, but Sipho in reception has only given me permission to take photographs in certain areas of the temple. Inside are roughly twelve or so Chinese Buddhists kneeling whilst they chant. It’s an interesting sound and I sit awhile, even though it is cold, to listen.

In 1992 the City Council of Bronkhorstspruit donated six hectares of land to the Fo Guang Shan Buddhist Order. The Venerable Master Hsing Yun sent one of his long -term disciples, the Venerable Master Hui Li, to build this Chinese Buddhist, cultural and educational complex.

The order follows a humanistic approach, which means that the village actively promotes Buddhism through education, culture, charity, and purifying human hearts and minds through practice. They have a strong global perspective, in other words, and have over 16 Buddhist colleges and 190 branch temples across the globe, three universities and numerous schools. 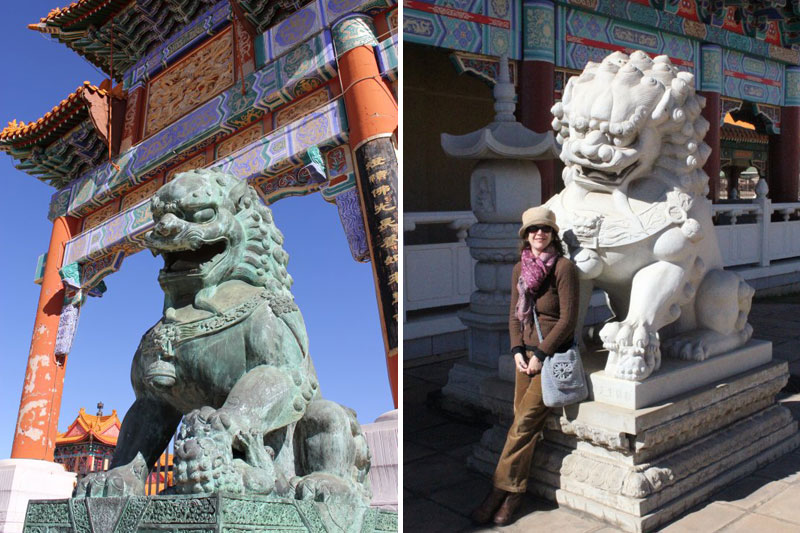 The Nan Hua Temple’s charitable projects includes winter donations of hot lunches at schools, computer donations, and wheelchairs. They also supply vegetables to nearby schools on a weekly basis to make sure children have a decent meal.

I head upstairs to the little Pu Hsien Shrine via the dining hall, which is due to feed visitors and monks a vegetarian lunch soon, as it is Sunday, although there is little activity here yet, despite being 10.30. You are encouraged to join the meal time and can give a donation at reception for your food. There is also a tea room just above the reception area, known as the Dew Drop Inn Tea House, where you can sample a variety of exotic teas and coffees. I’m a little intimidated by the quiet and the spoken Chinese, and decide that my coffee cravings will have to wait.

I’m amazed by the ornateness of the little shrine. The shrine to Samantabhadra is the Bodhisattva of Great Strength, whilst the six tusked elephant is a symbol of the six Paramitas – charity, morality, patience, effort, meditation and wisdom. The room is icy, particularly as I’ve taken off my boots as is the practice, and am wandering around the shrine in only my socks. 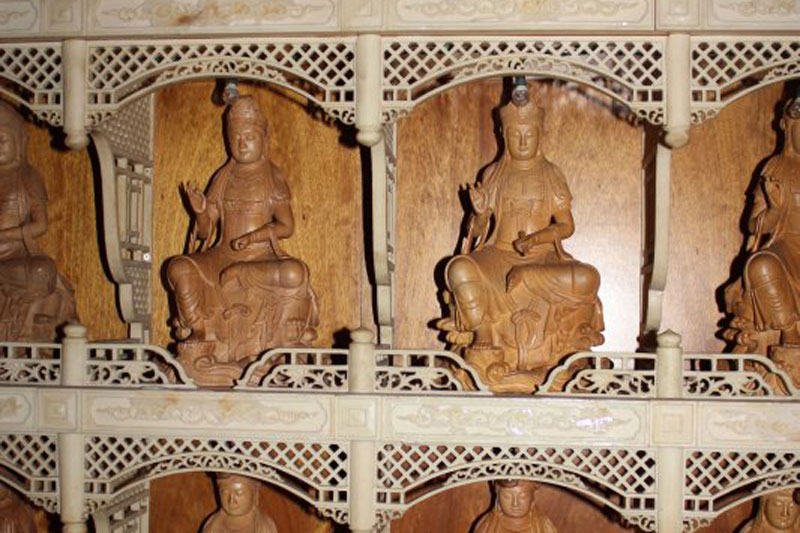 All around the room there are little carved wooden rupas, there must be at least 1000 of them recessed into the walls and I’m amazed at how much work has gone into creating the room. They represent Quan Yin, a female deity.

Downstairs the chanting has stopped. We head over to the main shrine, across the traffic circle through which an ADT vehicle comes obscurely roaring, its lights flashing. Just where it is off to is unclear as there is very obviously no disharmony this side of the cultural village.

The main shrine is incredible. It is regarded as the most important building in the village and is also called the Great Hero Hall. Even the steps leading up to the hall have significance, to remind visitors of our aim to gain enlightenment (it isn’t something you can be given). The hall is massive, filled with three very large Buddha statues also referred to as the Triple Gem Buddha (for some reason I find myself thinking of Sol Kerzner around now because of the sheer magnitude of the building). 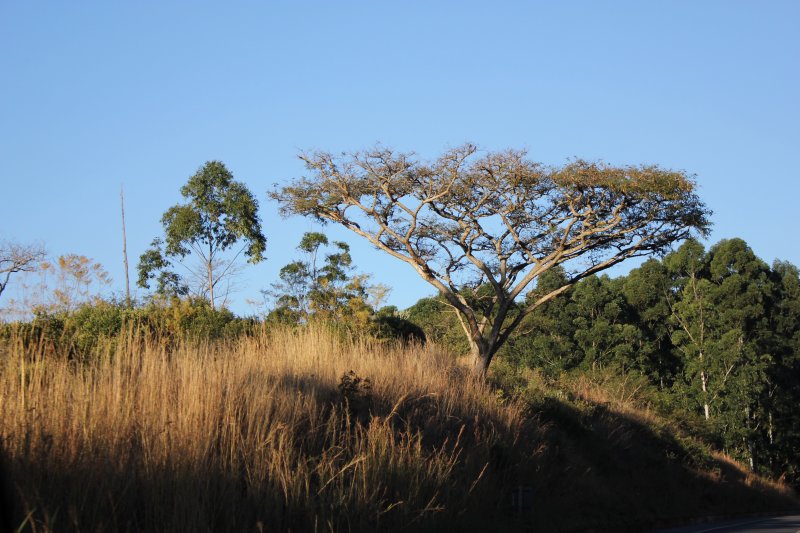 I’m not allowed to take photos, which is unfortunate, but I probably wouldn’t have felt comfortable whipping out a camera whilst faced with three smiling, bowing Chinese Buddhist monks, who can barely speak to me, but make us immediately comfortable and hand us a number of pamphlets in English, describing the temple and the work that takes place here.

To one side of the temple one of the monks is shuffling around in a make-shift kitchen, making tea. It can’t be too warm in his robes, despite his fleece, hat and warm socks. Ahead of me in front of the central Buddha, a Chinese couple and their baby, tied to his mother’s front in a kangaroo, are busy bowing and praying, sticks of incense in their hands. Later, on returning home, my son was to take out a stick of our incense. ‘I know how to pray with this now, mom’ he gestured, whilst bowing from his waist.

In the village are some 66 self-catering units, usually used for visiting groups or for the meditation retreats held at various times during the year.

There is yet another temple behind the main temple, but we don’t get to it. By the time we’ve seen the main one, we’re all templed out. The centre trains monks as well, most of them local South Africans, and the whole place operates on donations, not all of them financial, given to help spread Buddhist principles in South Africa. 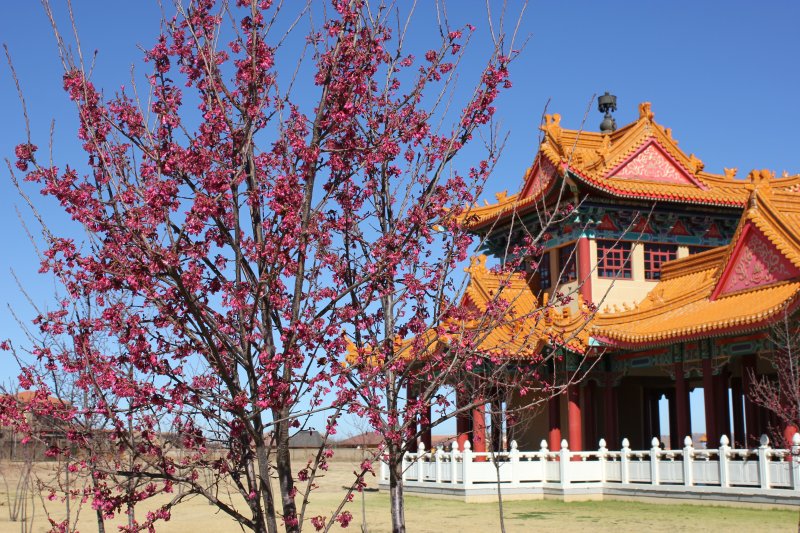 A beautiful space, well worth a visit.

The best small towns in Gauteng are but a handful. The place of gold (Gauteng translated from the Sotho) is a small province and as such is completely overshadowed by its vibrant centre – Johannesburg – the country's major metropolis that sprawls over thous...