“You can’t miss them,” Stuart instructs as we leave Boondocks, “head off that way, go past the whatsit, down a slight dip and they’re on your left”. Stuart is busy giving us last minute directions to find Nukain Mabusa’s flower garden, advertised on most of the local tourist information we pick up as worth a look-see.

We zoot off along the R38, Kaapmuiden behind us, Barberton ahead of us. I’m looking out for a garden. My better half, who as usual has done a bit of homework, is looking out for a series of painted rocks. Neither of us is quite prepared for the non-event of the stone garden. 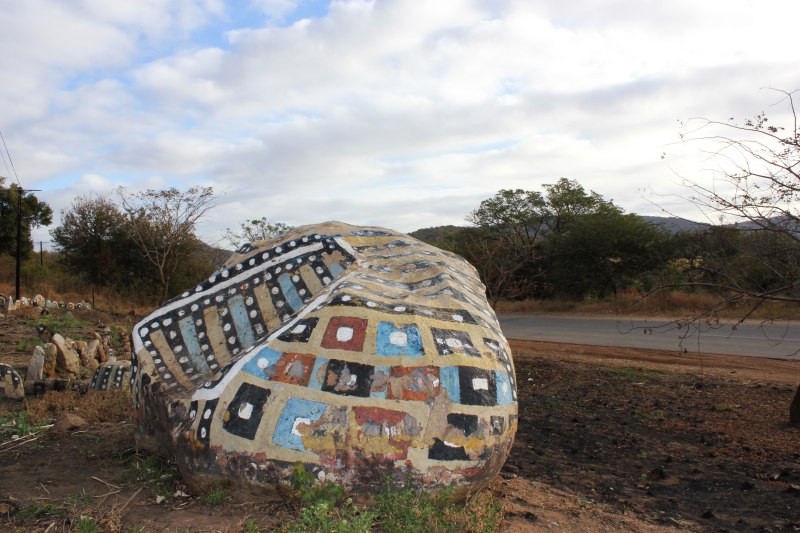 Drive too fast and you will pass them by without a backward glance. Nowhere is there a road sign to prepare you – local tourism obviously, despite using the designs as a branding tool, hasn’t deemed them worthy of any type of formal roadside marketing.

The stones, most of which, I would guess, have weathered somewhat from the constant sun, wind and rain that assaults them, are actually remarkably camouflaged, despite fanning up the greater part of the hillside.

I later learn that the rocks have indeed been left to languish. And it is only through the work of a few local lads – Mike Dehrmann from Working for Water, his grandson Greg, and Vernon Paul, who owns Satico Sawmill – who together have pledged to adopt and restore the ‘garden’ that it will endeavour, despite being regarded as an international icon. 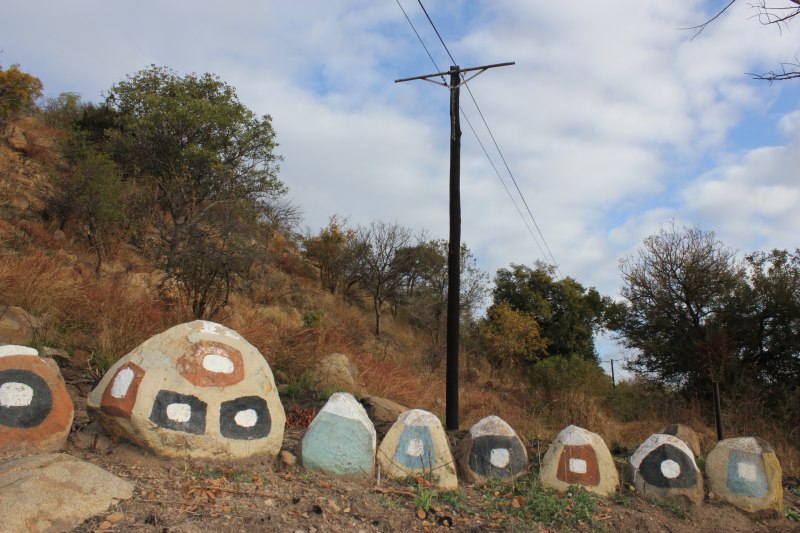 A few months before we arrive at the scene the site of the stones was a lot worse. You could apparently barely see the rocks for the height of the grass. They began by cutting it back with a bushcutter, and it took five days to clear.

The rocks lie in a part of the Lowveld known as Revolver Creek. After passing Esperado and Louisville a little later on we decide everything around here is coloured by the type of language you would expect in a Western movie. There is a village just across the road from the stones. We hear music pumping in the background, and people mill about behind a bamboo screen.

We tumble out of the car, my son to climb and scramble, and the rest of us to get up close to the rocks. “Where are the flowers?” I ask in all innocence until I realise that the title describes the garden of rocks.

Nukain Mabusa’s garden has stood here for nigh on thirty years. It is world famous rock art, featuring in John Maizel’s book Raw Creation and in numerous exhibitions. 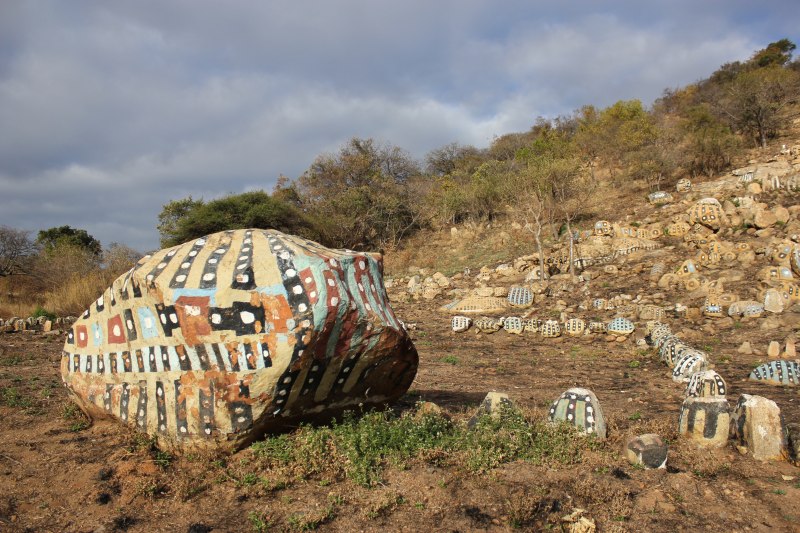 His work is recognised as an important example of South African Outsider Art, described by Maizel as synonymous with Art Brut (raw art) which is ‘uncooked’ or ‘unadulterated’ by culture, and raw because it is in its most direct and uninhibited form. The other South African example is Helen Martins’ Owl House in Nieu Bethesda in the Karoo. She at least has a museum to protect her work.

My son doesn’t need an explanation of Outsider Art. It describes artists who exist outside of established culture and society, which at times, I muse, also sometimes describes his antics and complete lack of inhibition. He totally identifies with the idea of painting rocks and assembling them on a hillside. They are not strange to him.

He doesn’t even ask how the stones got here. They remain for him, an obstacle course designed exclusively for his discovery and treats them the way, I think, Mabusa would have enjoyed. That they are painted in different colours and designs only adds to the experience.

If you consider that this is one of only 44 environmental art works world wide, we’re actually standing in an art gallery, viewing work highly considered by those who recognise an artist who, despite having no formal artistic training, was nonetheless inspired to create this personalised space. He landscaped his art in much the same way a landscape artist applies paint to canvas. 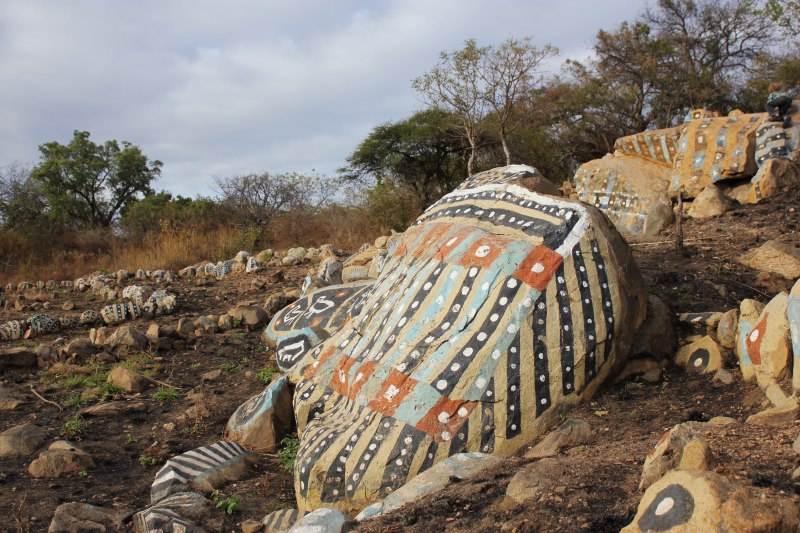 There is something beautiful about the arrangement of geometrically painted rocks. As I begin to photograph them, his ‘garden of flowers’ comes to life.

The works were a tourist attraction during Nukain Mabusa’s life, despite the fact that he was not recognised as an artist. That came after his death. He lies in a grave identifiable only by a reference number, in the cemetery in Barberton. The story reminds me a little of Mozart’s unmarked grave. Does brilliance fit hand-in-glove with poverty?

And the man behind the stones? Called the ‘Crazy Man’ by locals, Nukain Mabusa came from southern Mozambique, just across the border from here, from whence he fled during the civil war after his wife and child had died. He moved to Revolver Creek where he worked as a farm labourer in exchange for using the land on which he painted his stones.

An article by Pat Hopkins, who met the artist before his death, gives me a far better account than any other formally written biography, for not much is known about Mabusa. Whilst alive, Mabusa used to live in a two-hut homestead alongside the rocks. The rondavels were also painted with yellow, black and white circles and squares, apparently inspired by chevrons and traffic signs.

Inside the huts his walls were covered in similar. Whilst on the walls hung the odd newspaper clipping about his work. Outside, every rock surface available on the mountainside has been painted in his signature patterns – red, blue, gold animal motifs and geometric patterns. At the very top is a large black and white striped boulder that resembles the haunch of a zebra. 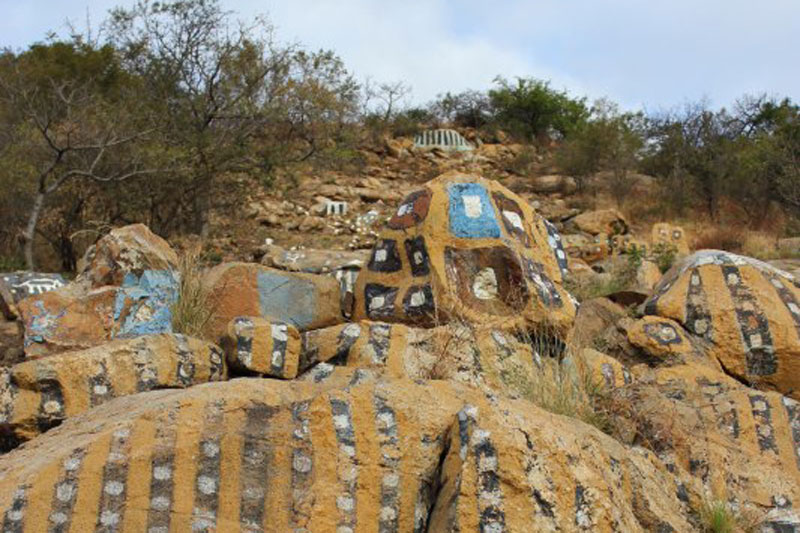 But why a ‘garden of flowers’?

Mabusa apparently described how if you stood at the crest of the mountain, keeping the stones aligned with a similar zebra haunch down near his home, the rocks look like flowers tumbling from heaven. The two rocks he described as his ‘altars’ – one on earth and the other in heaven – separated, yet linked.

His garden, Pat tells, was Mabusa’s preparation for Judgement Day and he described his own garden as the ‘most beautiful garden in the universe’.

But there is a sad ending to the story. Mabusa’s eccentricity was probably the reason he eventually dug a grave on top of his painted mountain and buried himself alive.

Brilliance might not always go hand-in-hand with poverty, but it does with eccentricity. And his death gave me pause to consider both Mabusa and his rocks in a new light.

Where to find it:

You will find Nukain Mabusa’s garden of flowers alongside the R38, 8 kilometres from Kaapmuiden, off the N4 east of Nelspruit.