Two of the world’s largest platinum mines lie just outside Rustenburg, earning it the nickname ‘Platinum City’, which is hardly a fair description of the city that started out as little more than a church and farming community centre, named as a ‘place of rest’ that still manages to retain its small town atmosphere.

One of the oldest towns in this part of the world, it lies surrounded by the Magaliesberg mountain range, its streets lined with the ubiquitous jacaranda tree. It’s a pretty little town, despite being a city, and there is an element of sluggishness that makes it so attractive, lying as it does only 112 kilometres from Johannesburg and not far from the Sun City complex … 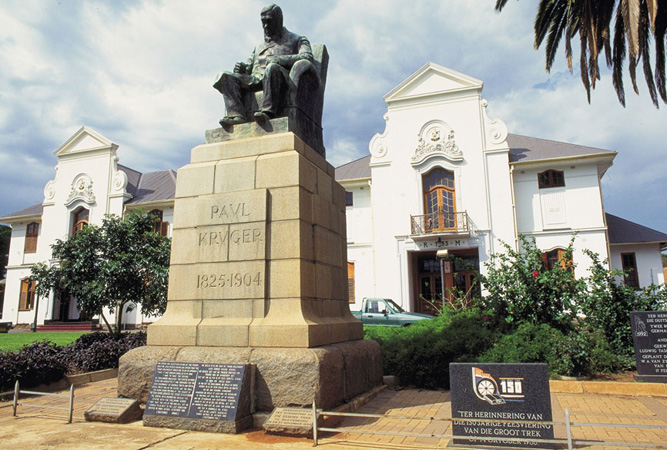 The temperature here is normally about 4 degrees warmer than Gauteng; it’s malaria free, with access to a number of game parks, including the Rustenburg Nature Reserve and the Pilanesberg Game Reserve, and relatively free of crime, making it an attractive option for visitors.

Other than game viewing, one can enjoy the Rustenburg Ramble – a meander that takes in craft galleries, farm stalls and places to eat; the Kgaswane Mountain Reserve just outside the town, the Royal Bafokeng Sports Place, one of the 2010 Fifa World Cup stadiums; and the Waterfall Mall, if shopping is necessary.

If you are an avid historian there are many places within the city to visit. The Museum, in the Town Hall; the Anglican Church, built in 1871; and the Dutch Reformed Church, to name but a few.

Accommodation in Rustenburg and near Royal Bafokeng Stadium:

Find Accommodation in Rustenburg for the 2010 World Cup by using our map designed to show distances in kilometres from the Royal Bafokeng Stadium to towns within a 10km, 20km, 30km and 40km radius to the Stadium. See: Rustenburg Accommodation.