Now reading: 10 Reasons You Should Visit the Big Hole in Kimberley

Kimberley’s open cast mine is the city’s major attraction. Mention Kimberley to anyone and their knee-jerk reaction is: ‘have you seen the Big Hole?’

Reputedly the world’s largest hole excavated by hand, the huge open pit (also known as the Groot Gat, which is Afrikaans for ‘big hole’) has attracted visitors since mining operations closed here in 1914, but is a visit a must-do? We list 10 reasons you should visit the Big Hole in Kimberley… 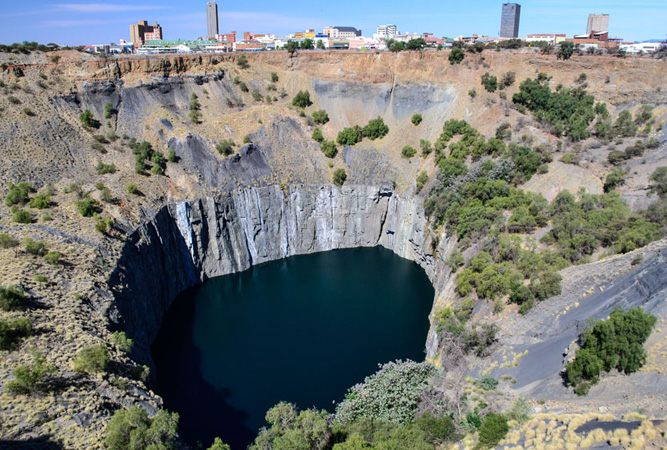 1. THE HOLE REALLY IS HUGE

Kimberley’s Big Hole is big. It is the site of the world’s biggest diamond rush and the subsequent Kimberley Mine that dates back to 1871, with the emergence of De Beers.

The gold rush brought thousands of people from all over the world, and the country, to the mine that started off as a hill, on Colesburg Kopje, but rapidly evolved into a hole as miners dug deeper and deeper into the Kimberlite pipe.

Today it stands 463 metres wide, with a surface area of 17 hectares, excavated to a depth of 240 metres. This depth was subsequently infilled with debris, so now has a depth of about 215 metres. 40% of the Hole is now covered by water.

2. THERE IS A CANTILEVERED PLATFORM OVERLOOKING THE HOLE

Back in 2004, before the museum and Big Hole facilities were revamped for visitors, one merely walked into a caged-off corridor with a view of the Hole. R50 million later, the Big Hole is a world-class tourist attraction with an open-air steel platform that juts over the Hole giving one a vertigo-inducing view right into the chasm.

It’s all the more impressive and interesting when you realise that the platform is exactly the size of a mining claim. 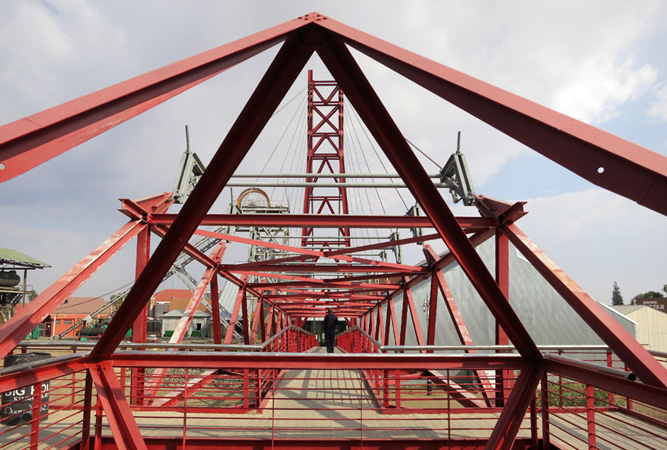 3. THE WATER IN THE HOLE IS GREEN (& MAKES FOR GREAT PICS)

The colour is more like turquoise, and apparently due to the aftereffects of algae. You have only to head to Instagram to see that it makes for interesting photographs.

4. THE MOVIE AT THE START OF THE TOUR IS EXCELLENT

I thoroughly enjoyed the twenty minute movie that marks the start of any guided tour. The entertaining film does much to re-create the mining conditions and characters that played a part in late-19th-century Kimberley.

The Diamond & Destiny film is a period drama that follows the fascinating story from when children discovered a shiny stone on the banks of the Orange River to how this shaped the destiny of many lives. 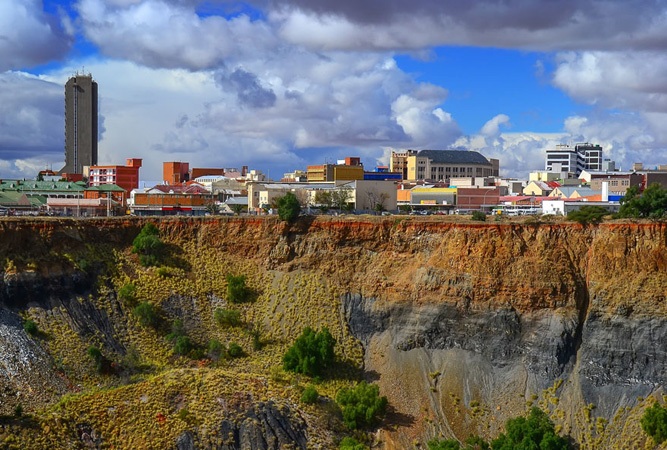 5. THERE IS A WEALTH OF INFORMATION IN THE EXHIBITION CENTRE

The exhibitions of the museum-part of the experience cover everything from how diamonds are formed through the history of the diamond fields to the exhibit of diamonds that include replicas of the Hope diamond, the Dresden Green and the Star of South Africa.

Interesting was the history of South Africa in relation to world events, the story of the myths and legends of ancient peoples of diamonds, and the hardship faced by those who laboured on the mines. You could spend hours here. My advice is to break the experience with lunch at the Occidental Bar & Restaurant in the Old Town, returning for further exhibits.

6. YOU’LL GET TO SEE REAL DIAMONDS IN A DIAMOND VAULT

It gets a little warm in the vault, but it is thrilling to be this close to such interesting stones. The temptation to touch is overwhelming (it’s all behind glass, so not much chance of that happening). The vault is a high-security vault created especially for the museum and it’s filled with stones of every colour, type and size. 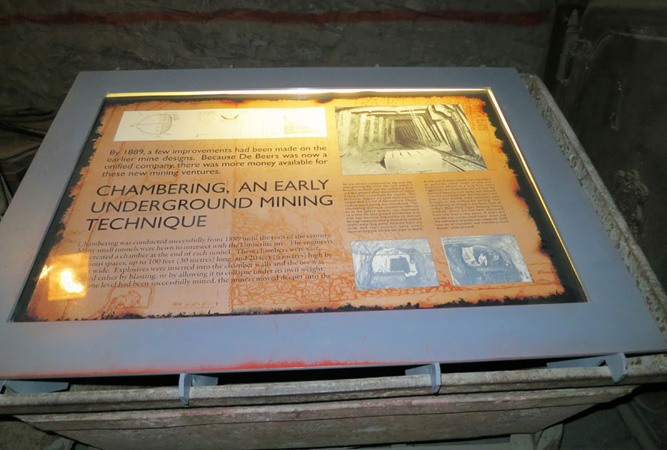 7. THERE’S AN UNDERGROUND EXPERIENCE THAT KIDS WILL FIND THRILLING

You don’t really go deep underground, but there’s a simulated lift that gives the impression of going down for miles.  The rock falls and the techniques of underground mining are interesting, particularly if you think that until Kimberley geologists were under the impression that diamonds were found only in rivers. In Kimberley the primary deposits were volcanic pipes.

You can walk around the Old Town free of charge – it isn’t part of the Big Hole experience – but you would lose out on the whole story of Kimberley if you forego the guided tour. Historically, the Old Town is a series of buildings brought back to life.

The buildings are period pieces filled with memorabilia and historically relevant artefacts, moved here from their original places around town as they became threatened with demolition. Now there’s a collection of pubs, shops, churches and a functioning pub and guest house.

There is also a very short vintage tram ride (fun for children, but otherwise not worth the extra cost). This ride used to be far more extensive, connecting the city hall with the Big Hole. 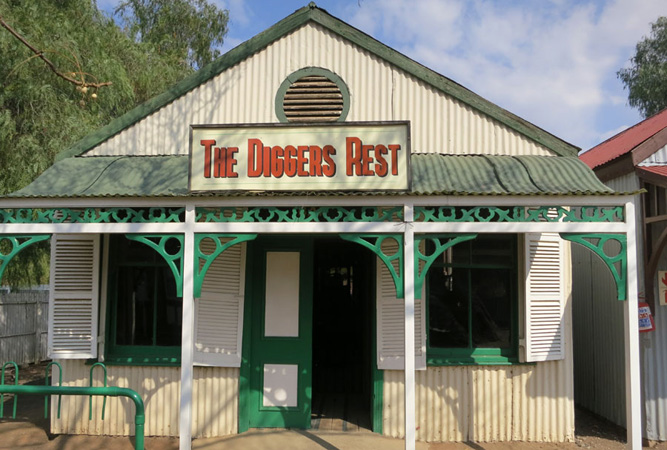 The Universal Accessibility (Mobility) Award and the Visitor Experience Award in the 2015 Lilizela Tourism Awards. And the team at the museum has received the TripAdvisor top award for service excellence for 2013, 2014 and 2015.

But on separate occasions. The dog one can understand; it’s a story that ends well as she was adopted by the man who pulled her out, as part of the rescue team. But the man rescued from the banks of the hole in September 2015 was apparently in search of diamonds on a Sunday afternoon. Disoriented, he had to be pulled to safety. The mind boggles … 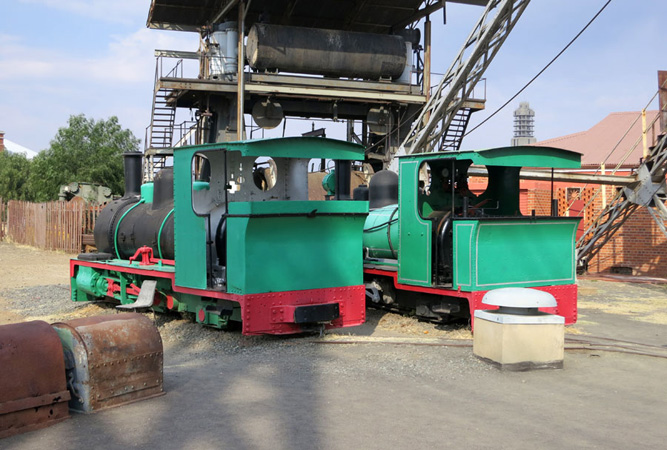