The 33rd event in Cape Town got off to a faultless start, with cycling great Lance Armstrong among the elite riders who started on their 110km journey just after 6am.  Not being quite as elite, my family started at 09.21, in batch OA.  As this was my first ‘tour’ I was very impressed with the incredibly efficient starting operation – it can’t be easy manoeuvring 35,000 odd riders but the organising staff has it down to a fine art. 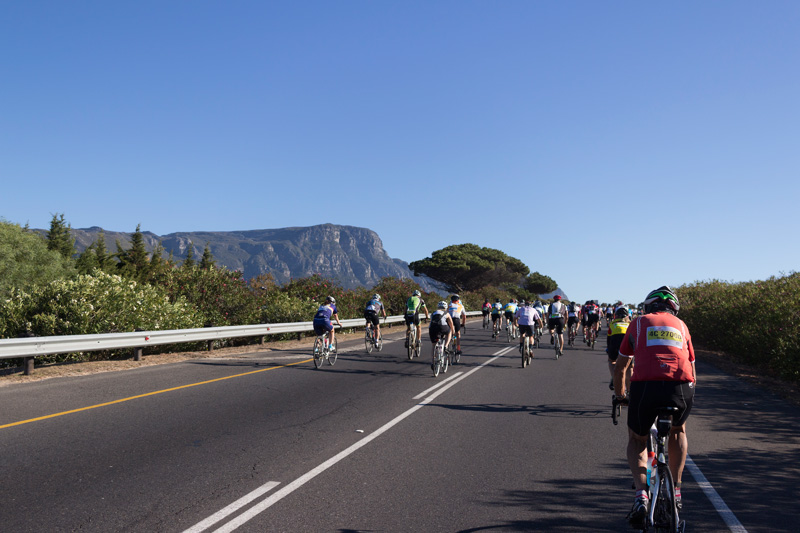 We were set on our way at 09.21 and into the wind we went.  After seeing the wind last year I was quite vehement in the fact that I would not even get out of bed if there was so much as a gentle breeze on Race Day.

So when the wind in Sea Point woke me up during Saturday night I thought ‘excellent you can wave goodbye to the rest of the gang and then settle down somewhere in Camps Bay to watch the top guys come by!’  Guilt and peer pressure however got the better of me and I lined up with everyone else on Hertzog Boulevard (probably feeling a bit sorrier for myself than anyone else did!).

The supporters along the way really get involved and it makes a huge amount of difference to have a bit of encouragement.  It took me at least thirty plus kilometres to actually get into the race, to get into a rhythm and to start enjoying the whole vibe of the day.

Of course the going was always going to be tough – one can’t do a few spinning classes and one 60km road race and then jump on a tractor of a mountain bike and think its going to be all plain sailing, especially when having to cycle into a 45km per hour wind!

I started getting into it all after free-wheeling down Boyes Drive and into Kalk Bay and after stopping for an energy gel, hit the road again for the next big stop; Sigh-mon’s Town!  Although the route into Simon’s Town was probably the worst stretch (I had to cycle with my eyes closed at times to stop the beach sand flying into my contact lenses … note to self, not a good idea to cycle sans shades) but once in the naval town I managed to spot my Dad and with his encouragement hit the road again for the trudge to Smitswinkel Bay.

Although I’d done minimal training I was very proud of myself for cycling up all the hills except for Suikerbossie – and believe me there are a good few hills with Chapmans Peak Drive being a terror of a seemingly never ending climb!

All in all I enjoyed my ride, all seven hours and thirty nine minutes of it!  Good moments to remember are as mentioned above; eventually getting respite from the wind after Smits, cycling along Misty Cliffs and actually gasping at how beautiful the sea looked – I’ve never seen it that turquoise blue before.  Smiling and waving at people offering encouragement and support from their driveways, patios, and generally anywhere along the way!

I will never forget the feeling of pouring a cup of water over my salty, grimy and sweaty face – I must have looked a picture!  I will also, for a long time to come remember the young boy near Imhoff Farm running and pushing a hand cylist for a good few hundred metres – I almost wanted to ask him to offer me the same courtesy!

I had a chuckle with a fellow rider after he told me his bike was feeling tired so he was going to push it for a bit!  Not to be taken away was the glorious, glorious downhill after the incredibly long climb up Chapman’s Peak Drive.

Not so good moments were realising that the hill I thought was Suikderbossie was actually Klein Suikerbossie and the real hill was still to come.  But as a lady along the way said ‘this calls for less cycling and more walking’!  I couldn’t agree more.  Another not so great moment was realising the wind was so strong coming down Suikerbossie that it wasn’t going to be free wheel after all!

I’ve never had to pedal so hard and of course my right quad decided this would be a perfect time to cramp up … luckily a kind cyclist came to my rescue with a tube of Deep Heat and I could make it a few more kilometres to the physios near the Twelve Apostles Hotel (what an incredible job they did – as did the rest of the volunteers and organisers – so thank you).

Coming through Camps Bay was great – the kilometre markers seemed to tick by more and more quickly and once through Camps Bay one definitely feels the excitement that the end is near and you’ve actually managed to cycle 110 kilometres.

Turning left to start the cycle along the Sea Point Promenade was wonderful and I’m sure I even pedalled a bit quicker along this stretch (all the time willing my muscles to please not cramp anymore) and then finally, finally are the 500m TO GO markers, then 400m TO GO and at last I crossed the line and nearly wept a tear of joy and relief.

I’d started off at 9.21am and it was now shortly after 5pm so it had been a long day of mental perseverance but Id made it!