Over 200 000 people climb Lion’s Head every year in Cape Town. I’ve even heard postulate that the figure is closer to around 3 million.

The picture-perfect mountaintop perches 2 000 feet (670 metres doesn’t sound nearly as dramatic) above the city’s coastline, offering both a relatively easy (if steep) ascent and jaw dropping views – plenty of nerve-jangling Instagram shots of people posed centimetres from the edge or leaping across boulders on the summit.

Lions Head mountain stands between Table Mountain and Signal Hill, forming part of the city bowl’s dramatic skyline. These mountains are three of a peninsula mountain chain that straddles the cape over which the city sprawls. 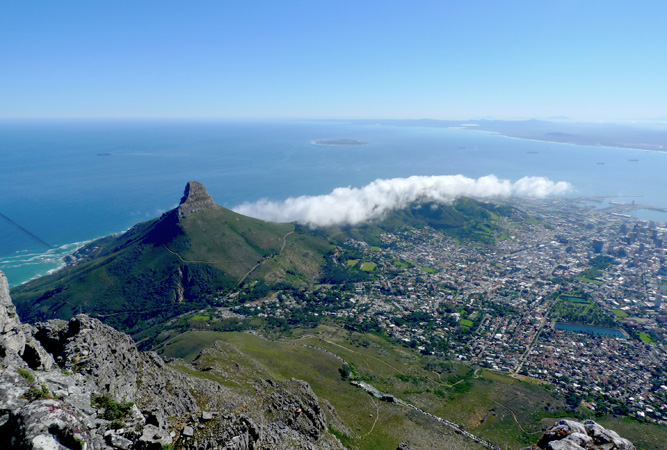 The monthly moonlit walk to the top has become something of a pilgrimage with crowds heading up the quick, but gruelling, one-and-a-half hour long Spiral Path to the top.

The hike may involve rock scrambling and the odd chain ladder, but this does not appear to dampen the spirits of thousands who advocate this is one of the highlights to any visit in the Mother City.

It is such a popular tourist attraction that when people are not on the beach, they head up Lion’s Head. Not even the subsequent descent by torchlight hinders people’s enthusiasm for the route.

Did we mention the views? 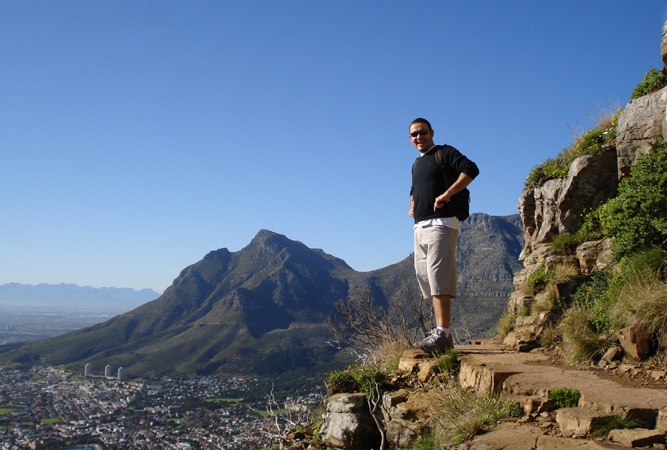 1. Geologically, Lion’s Head is a wonder

This is a well known rock climbing area known as Lion’s Head Granite. Underlying Lion’s Head peak is the Malmesbury Group siltstone, which, if you descend the mountain and head down to Sea Point, you’ll also find on the beach (thanks to Chris Rowan’s geological blog for this explanation).

2. You can see all the way from the 12 Apostles to the Atlantis sand dunes

From the summit of Lion’s Head are 360 degree views.

One overlooks Table Bay and Robben Island, as well as the beaches of Three Anchor Bay and Sea Point. Far off on the horizon, on the other side of Table Bay, are the Atlantis sand dunes, Koeberg Nuclear Power Station and Blouberg beach (from there you get the famous table-top view across the bay view of Table Mountain).

Turn around and Table Mountain and the 12 Apostles are behind you. 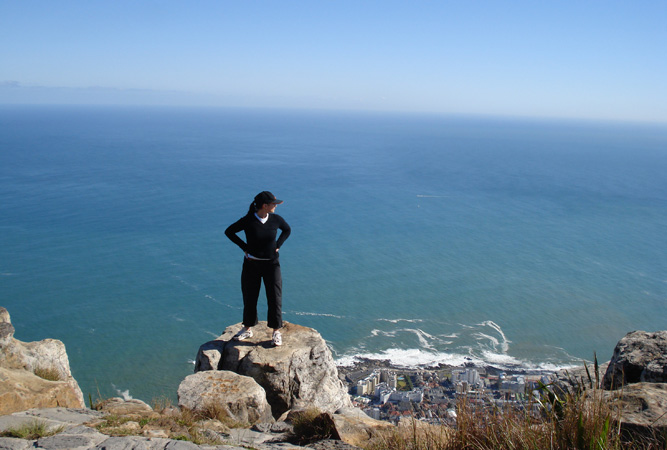 3. There are a couple of paragliding launch sites on Lion’s Head

Paragliders will tell you how it depends on the wind as to whether they’re launching off Lion’s Head or Signal Hill.

The Spiral Path Route up the mountain passes the first of these sites about 20 minutes into the walk, as the road ends and the sand path begins. The first paraglider flew off Lion’s Head in 1987.

4. It’s easier than hiking Table Mountain, but the last quarter is more difficult than you think

It might only take an hour-and-a-half but the climb involves a steel ladder, an exposed walkway with a chain handrail, a rather daunting traverse across a grassed section, a subsequent series of staples and chains (this is optional) and then a final steel ladder on the summit ridge before a scramble to the top. 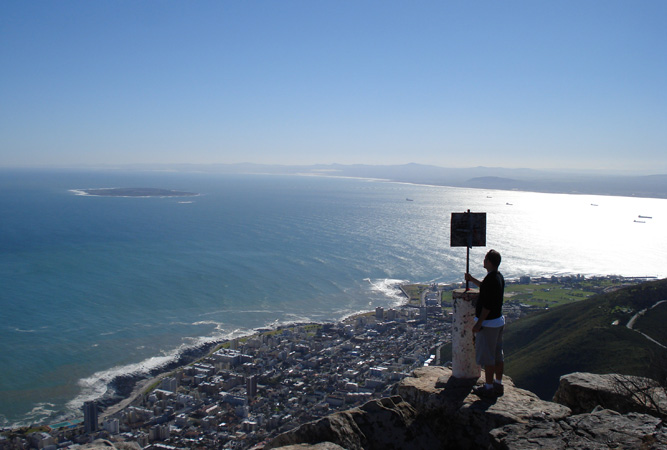 5. You don’t have to take the infamous chain ladder

You will have to climb the initial steel ladder, then an exposed chain handrail, before a climb across to a series of staples and chains (which was known as the chain ladder). At this juncture is an option to bypass. Instead of up, you can take a level path to the left, to the south-east ridge.

The south corner route is well marked, but take care at all times. The final summit ridge, about 150 metres up the ridge with one more ladder to go, is the most exposed section of the walk, and hikers do need to take care. Hikers have fallen off the mountain before.

6. There are caves on Lion’s Head

Wally’s Cave is on the Table Mountain Cable Station side of Lion’s Head, whilst Watchman’s Cave is just above the main path up Lion’s Head.

7. Yes, once there were lions

Written records reveal that hippos, elephants, lions, hyaenas and leopards lived in and around Cape Town during the late 1600s.

The last lion on Lion’s Head was shot in 1802, and the last leopard somewhere in the 1820s, but you can still find traces of caracal and African wild cat, though you won’t catch sight of them. 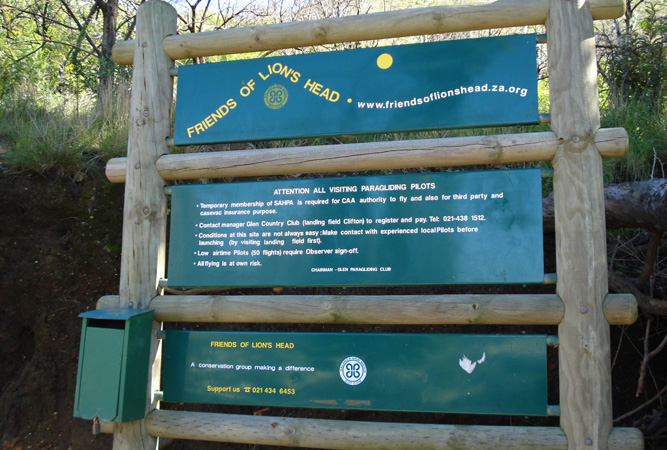 8. There’s even been snow

Records show that during the winter of 1878 a blanket of snow fell on Lion’s Head.

9. And, there are lizards

Look out for the black girdled lizard and the southern rock agama.

The blue-headed southern rock agama with rough scales and his distinctive ‘push up’ routine, is as easy to spot as the tough little black girdled lizard, often out to warm themselves in the late afternoon and early mornings.

Named Lion’s Head because the shape of the mountain is said to resemble a male lion reclining with his head towards Table Mountain, it wasn’t always called such. The English, in fact, called it King James His Mount – rather a mouthful to deter the Dutch from trying to occupy Table Bay.

The English issued a proclamation annexing Table Bay, in which they referred to their having “made a heap of stones on a hill lying west-south-west from the road…and call it by the name ‘King James His Mount’”. This obviously didn’t do the trick, as the Dutch took control after establishing that the annexation was not confirmed.

They called it Leeuwen Kop. 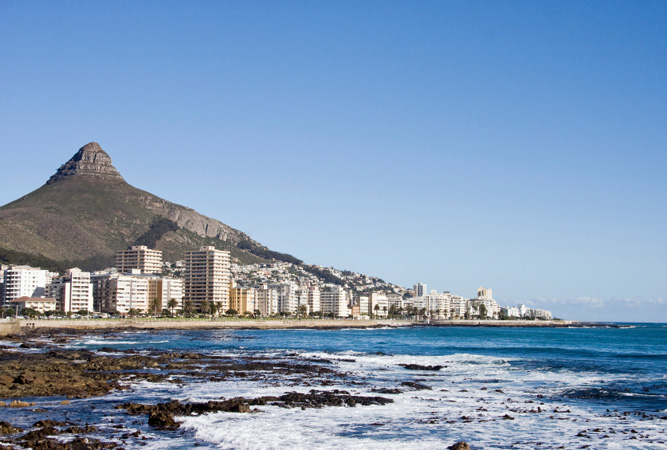 get a copy of (or get it online) a Gateway Guides free edition of Lion’s Head Spiral Route for a description and a map of the walk up Lion’s Head.

head up to Kloof Nek, take the road towards Signal Hill lookout point and about 500 metres later park under trees alongside a little wooden hut. The start is well marked.

so many hikers in this open-access part of Table Mountain National Park does need a cautionary postscript. When heading up the mountain, realise that it is wilderness terrain.