Now reading: Farmstalls along the N2 between Sir Lowry’s Pass and the Houhoek Pass

As the N2 summits Sir Lowry’s Pass and begins its meander through one of the most lovely valleys known to man – the Elgin Valley is sumptuous it is such a feast of beauty –  it passes no fewer than five farmstalls distributed fairly evenly on either side of the road (if you’re smart, you can stop at one or two on the way to your destination, and then another couple on your return).

We were headed to Vermont, the little village not far from Hermanus that has enjoyed a fair amount of attention if the number of holiday homes is anything to go by. We took it upon ourselves to stop at four of the farmstalls in an effort to do a comparison and to see just what each of them offers – besides, it’s great fun to fall out of the car, meander around the grounds, have a look at all the goodies, make a selection or two and then, between mouthfuls, rate the nosh … 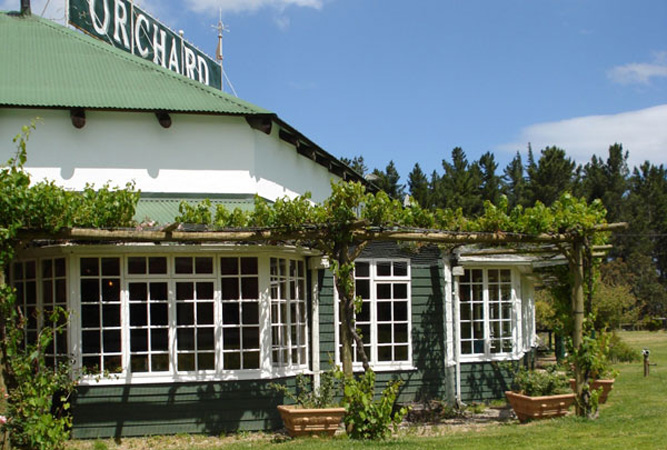 Not even half an hour out of Cape Town, the Orchard Farmstall in Grabouw lies in the bend of the N2 in a pretty setting.  Facing out on the parking lot, its pathways strewn with climbing roses, is the farmstall, a coffee shop and a Wildekrans wine tasting venue, behind which lies the inevitable estate agency. Turning off the N2 towards the farmstall, we couldn’t help noticing that a particularly unattractive mall had gone up just across the road from them fairly recently – can’t help wondering if it has affected passing trade?

The coffee shop is not much to write home about. The food, based on a quick squizz through the menu, is typical of roadside restaurants – pies, pasta, salads that border on boring, hamburgers, an array of soft drinks and coffees. But then you come to Orchard Farmstall to sample the cakes! And what an array. From apple tart to chocolate mousse cake, via an incredible looking lemon cheesecake, just about every one’s taste is catered for here – and they’re all baked on-site. There was also a mouthwatering array of muffins and breads, although, on asking, the breads are made with pre-mixes.

The shelves are lined with home-made jams and preserves – anything from orange, passion fruit, pear and ginger to pineapple, apricot, strawberry etc. There are local and imported teas on sale, any number of local arts and crafts and then an array of the usual – chips, sweets, cooldrinks – that we’ve come to expect from farmstalls. There is a lovely jungle gym for little ones to play on and the grassy surrounds of the farmstall make a good spot to sit and picnic if you’re so inclined. 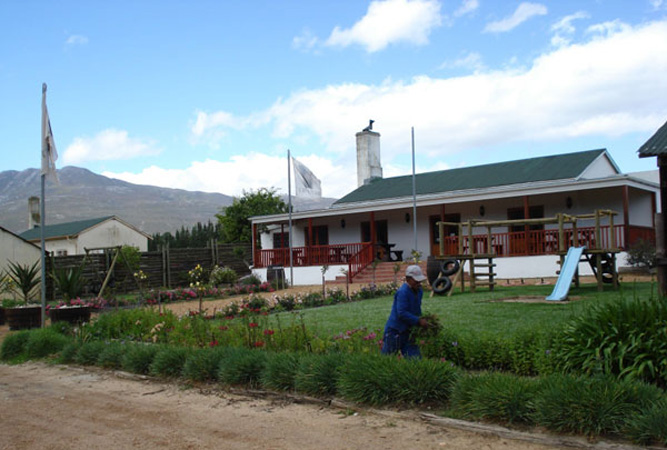 A little further down the drag (the N2 that is) a large sign advertising Thandi wines, farm kitchen and crafts. We were rather excited at the prospect, but it seems that we chose the wrong day as there wasn’t much in evidence at the time. The restaurant had a number of clientele though, and I could see why – the menu looked particularly enticing, with homemade babotie and pie, and scrumptious breakfasts, whilst at the other end of the room was a wine tasting bar. The roaring fire, on what was yet another one of the Cape’s freak cold spells in November, was also most welcome.

What I didn’t realise is that Thandi wines were the first Fairtrade wines in the world! Thandi is a true empowerment project with 90% ownership in the hands of its workers. It’s the first enterprise in South Africa where the workers are equal partners with the state, the community and private enterprise in a profit-sharing farming venture! (awesome)

It goes a long way to explain the gorgeous little vegetable and herb garden into which we stumbled to one side of the restaurant and children’s play area. At Thandi you can pick your own vegetables fresh from the fields, although the fields usually dedicated to vegetables were being prepared for new crops from what we could see. And according to Susan Kroukamp, who manages the restaurant, craft centre and farm stall, much of their home-cooked food benefits from the vegetables grown here, and they use their own vegetables wherever possible (what I didn’t ascertain was whether or not they were organically grown).

The farmstall and craft centre, unfortunately, were undergoing refurbishment so weren’t open. By all accounts it’s usually filled with home-cooked, home-baked, hand picked goods and produce. We’ll be back! 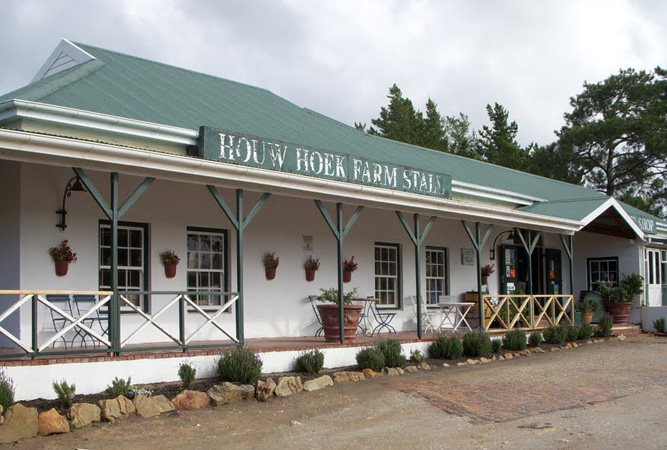 Our next stop was the Houw Hoek farmstall. They’re famous for their pies and lay claim to the ‘best pies in the land’ (we thought we’d put them to the test, but more about that later). Judging by the number of cars that make their way through here on any given day (we stopped off here on a Thursday and a Sunday and both days were equally busy) this is a popular venue.

It’s a little further along the N2 from Thandi Wines, on the right-hand side of the road, as opposed to the left, just before you reach the Houwhoek pass and into the Caledon Valley. Again, you don’t come to the Houw Hoek Farmstall to savour its typical roadfood in the adjacent coffee shop; if it were in Cape Town, you probably wouldn’t frequent it at all, but the farmstall is probably the best of the lot. Certainly it easily jostles for first place with the Peregrine Farmstall, on the other side of the Houhoek Pass.

The deli side of things is well stocked – olive oils, vinegars, nuts, preserves, jams – much of it locally sourced, or at least as much as they can. The service is excellent – you are not left to idle away your time dreamily infront of the shelves, but rather in moments your needs are met and information is easily forthcoming.

But back to their pies and sausage rolls, for it is for these that the number of passers by stop – certainly their pie rack is cleared out at least once a day by hungry bikers and roadtrippers (what is it about being inside a car that brings on the pangs of hunger?).

I’m not a pie fan, but I can attest to the excellence of these. My other half succumbed to one where the pastry was melt in your mouth stuff.  I believe that there are certain fans that can write an ode to their pies, so popular are they! And that is without mentioning the wine section of the stall, adjacent to the shop that supplies a good range of wines from the region. 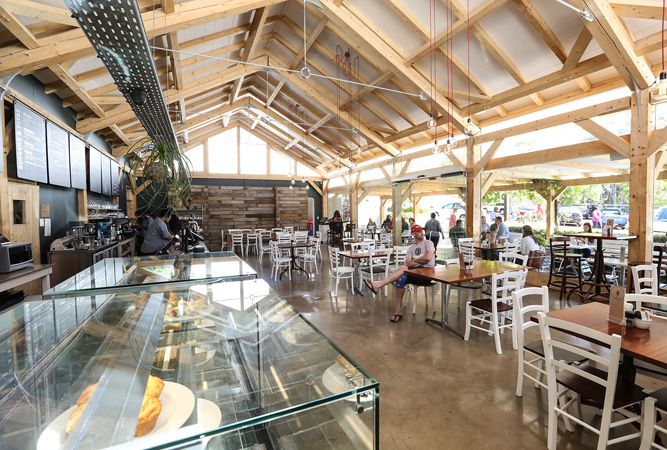 Last, but by no means least, we made a stop at the Peregrine Farmstall, close to Grabouw. Apart from the fact that I felt as though I’d stepped onto the set of Heidi (the farmstall resembles similar shops in the southern German region), this was a stall that was humming with activity.

They have a tradition of quality homemade fresh farm produce, and you can smell it the minute you walk in the door. Home made breads, pizzas and pies come rolling past you down the aisles, baskets are overflowing with fresh produce, and if that doesn’t tempt you, then the myriad deli-style foods will – anything from homemade pastas to delicious homemade sundried tomatoes.

Right in the front of the stall are an array of quiches, tarts, cakes, pecan nut pies, muffins and other delights, and all reasonably priced. The fridges were filled with anything from keoksisters to mosbolletjies. They also boast a Saturday morning market that looks well worth attending. Peregrine Farmstall claims to emphasise all things natural, organic, handmade and wholesome – all of which I’m in favour!

So, which farmstall to choose? The choice is yours!

I won't beat around the bush. The N2 is filled with farmstalls, so best I get my punt in quickly or you'll miss out. Riviersonderend, the town most people simply pass through, is your number one pie stop. Forget Peregrine or Houwhoek farmstalls (even if Per...

A mouthful at Root 44 Market

Walking into the Root 44 Market in the Cape Winelands on a Sunday morning was a total surprise for my senses.  Once I was past the proteas and fresh flowers, the sweet smell of pancakes wafted into my nostrils and left me leaning towards the food tent. As i...