“Oh, you must visit Hotagterklip”, Ilze from the Napier farmstall mentions, on her way  to deliver another couple of her scrumptious chicken pies to the table alongside us. We are busy pouring over a map of the area, enjoying the idea of choosing where next to go, once we’d settled ourselves in Arniston.

“Hotagterklip? Where’s that?” I ask, assuming it is another little town in the vicinity, one upon which I have not yet stumbled. I begin doing mental calculations as I try to work out where another town could possibly lie in the Cape Overberg. 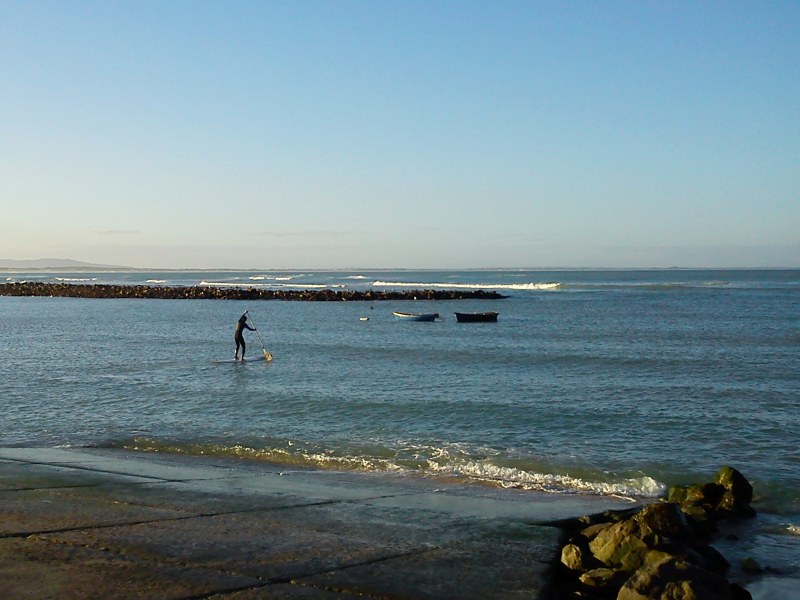 Finally, after reading through local brochures, we discover that Hotagterklip is not a town, but a little collection of fishermen’s cottages just outside Struisbaai. And since Struisbaai is en route to L’Agulhas, we’ll pass Hotagterklip at the same time – bonus.

Stopping off at Hotagterklip, we soon learn, takes a concerted effort. Three of the pretty little whitewashed cottages lie to the right of the road, literally on the doorstep of Struisbaai. Yet there is something about the lie of the land (I think there is a curve in the road just then) that sees one drive past without the cottages even so much as registering.

There is a sign. Someone has painted ‘Hotagterklip’ in black on a little white wall close to the cottages. But it’s fairly far off the road and doesn’t make much of an impact. Of the three little cottages, one is open for coffee and the other is a Padstal. The house known as the Craft cottage is closed. Not much seems to be happening either. But I get out to explore.

Maryna is manning the Padstal. She’s busy chatting to a couple of wire artists as I arrive, and they’ve obviously just given her a few enormous wire hearts to hang up in the whitewashed interior – the type that are rather fashionable at the moment. 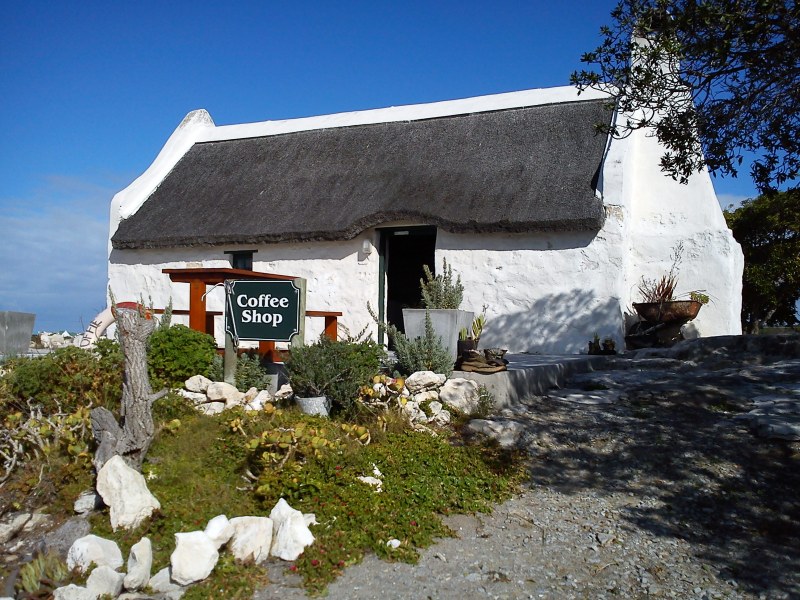 I stoop to enter the tiny farmstall. Maryna is happy to chat. It seems that most people, like us, drive past Hotagterklip. They don’t even realise that one can stop for coffee and cake, or that there is a farmstall here at all.

It seems too that all the big bus tour companies pass the historical monument by, heading straight for L’Agulhas and the coffee shop in the museum at that end. As a result, this beautiful little stretch of history is lost. It’s a shame, really. Maryna tells me how Sophie, who I see serving coffee to the first couple they’ve had stop the entire day, used to live in the very cottage in which she now serves tea, along with her rather large family.

Hotagterklip is Afrikaans for ‘left rear stone’, a name that is ostensibly derived from the days of the first ox wagon trek, when a stone outcrop meant a detour for travellers – if a stone was in the way, they would try to get the wagon pole to pass to the left of the stone.

Most of the collection of historical fishermen’s cottages lie over the road from here, behind a rocky outcrop, so I can understand the origin of the name. It has a connotation for today too, given what I’ve been told, as unless visitors know about it they tend to treat Hotagterklip as something of a detour. 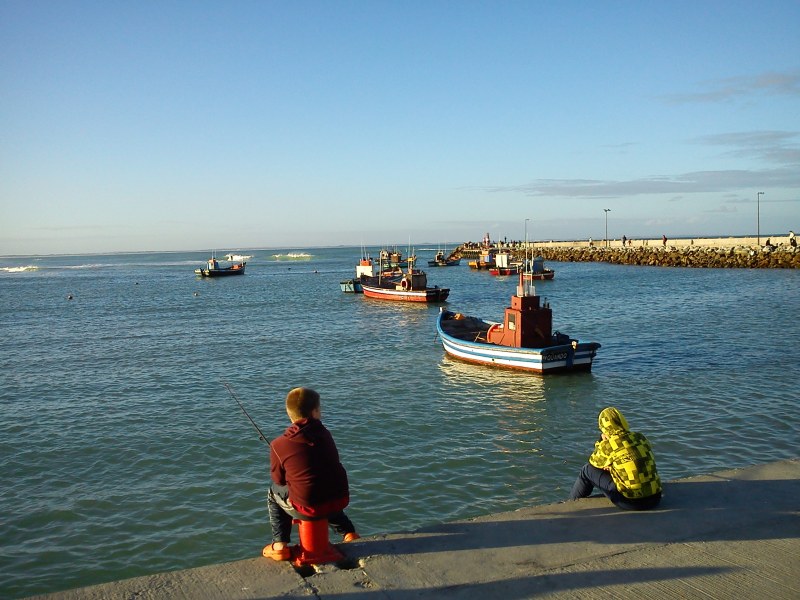 These other little cottages across the road from the Padstal appear to be lived in but have almost been absorbed into a modern townhouse complex. It’s only recently that they’ve been restored and declared national monuments, including a thatched roof church a little bit further down the road, right in the heart of Struisbaai, tucked in amongst an OK Grocer and a hardware store.

There’s a wonderful exchange between my son and Maryna. He gives her money after hearing her story. He’s only five, and is just beginning to grasp the concept of trade. The offer of his coins to Maryna, who has mentioned that it is no longer feasible for her to keep the coffee shop running, is his way of showing empathy. She responds  beautifully offering him a thank you in return, a sweet that must cost quite a bit more than the coins he has proffered, but this doesn’t seem to worry either of them. It’s one of those warm hearted instances, where a little bit of grace enters the moment.

Later, we have a little time left, after visiting L’Agulhas and the lighthouse, to explore Struisbaai’s harbour.  It’s surprisingly small, built in 1959 and filled with brightly coloured little wooden fishing boats. A few children play along the pier and I watch as one little girl runs screaming away from a group of boys who try to catch her net, which has fallen into the sea. 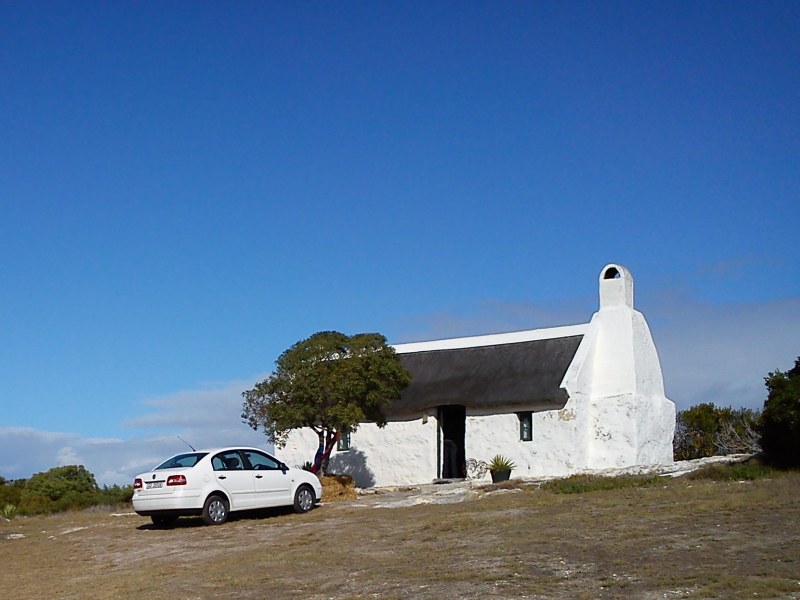 There is a seafood restaurant on the quayside that is doing good business, and icecream cones are selling like hotcakes as the day has been beautiful. At one end someone is trying to learn stand up paddle boarding, the latest craze to hit SA, and we watch awhile. There is supposed to be a community of giant stingrays that live in the waters of the harbour here that are a major attraction, but we don’t see them, despite hearing that they allow people to hand feed them.

In this light the harbour is quite beautiful. And the town too has managed to retain that typical beachside town feel. Struisbaai looks like a wonderful place to holiday.