Now reading: L’Agulhas – In search of Horatio Blair Adams at the southern-most tip of Africa

I am surprised. Pleasantly. As L’Agulhas is a lot more beautiful than I had anticipated. To my mind’s eye the beachside town that also serves as the southern-most tip of Africa would be awash with gargantuan holiday homes, guest houses and pretentious restaurants.

In reality, L’Agulhas has managed to retain its unpretentious beachside holiday feel with barely a look-in from the usual second-homer suspects that move in and build double-storeys right infront of the best views in South Africa. 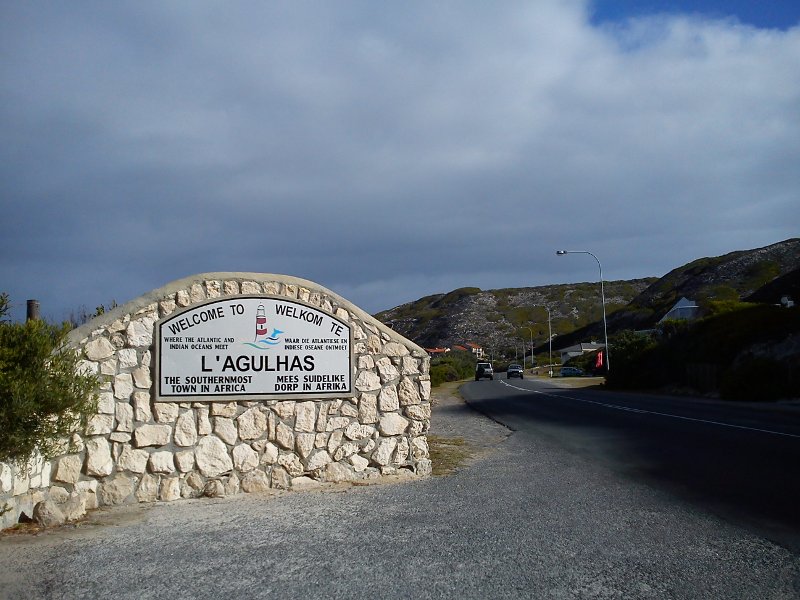 I do have to warn you of a predilection in the town to the term ‘southern-most’. Everything from the local pizza joint to the town’s lawyer claim to be the southern-most in their trade, which is fair enough I suppose, given how many beachside towns have to jostle for attention come holiday time – it pays to be southern-most, obviously.

What I love about L’Agulhas, and a large part of Struisbaai too, is that because it is on a peninsular (Struisbaai is at any rate), a lot of the houses lie on the other side of the road from the beach, almost a single layer of beachside cottages that make one think of Cape Town’s False Bay beachside towns twenty years ago. Most of the accommodation in L’Agulhas is in modest, old-fashioned houses reminiscent of holiday homes in the seventies.

It isn’t densely populated, there is a lot of fynbos still in evidence, and the beaches and bays are quite beautiful. The town of L’Agulhas, as one would expect, is dominated by the lighthouse. It’s another stormy day when we arrive, the red and white stripes of the lighthouse beautifully offset against the slate of the skies.

Aside from the fact that many still think that Cape Point in Cape Town is the meeting place of the Atlantic and Indian oceans, I can assure you that the rather important sounding International Hydrographic Organisation has stated L’Agulhas is the agreed confluence.

There’s a rather large stone marker down at the beach infront of the lighthouse to mark the spot, the official dividing line, and most people have their photo taken standing on or in front of it.

The Cape Agulhas lighthouse is interesting. It’s one of the first I’ve seen that seems to emerge from the centre of a building – not that I’m a lighthouse fundi – which looks a little odd, although Green Point lighthouse in Cape Town, besides being square, is fairly similar. It’s quite a construction and beautiful to look at, nevermind climb, which seems to be the operative reason for visiting it – must warn you about the ladders… 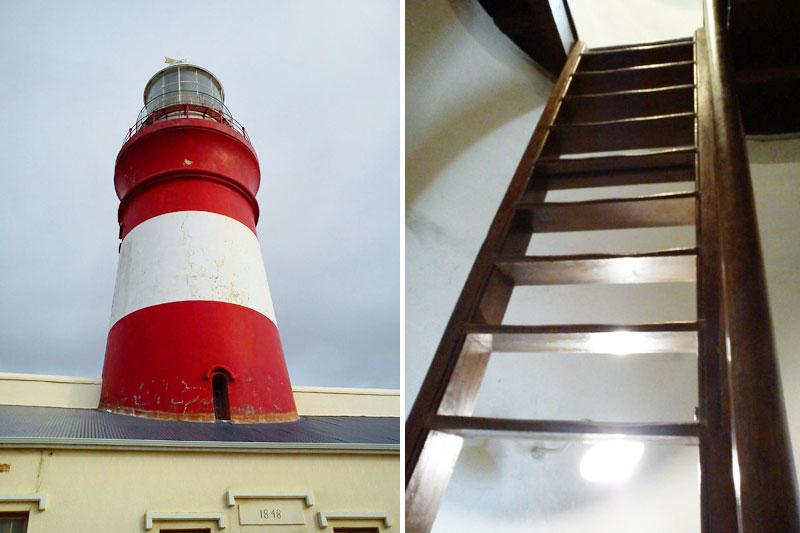 And it is here where our adventure begins. For we are not only visitors to this historically hazardous tip of Africa, we are also on a search for a long-lost ancestor.

We end up taking up a lot of the ticket lady’s time trying to find my husband’s great-great-great grandfather’s name on a list that, admittedly, the lighthouse had ready and waiting (it is obviously a fairly common question – to find one’s ancestor’s name on the lighthouse keeper’s list).

A rather irritable queue begins to breathe down my neck from behind. You can literally hear the cogs ticking over (who cares if someone called Horatio Blair Adams worked in a lighthouse, ever!), but we finally lurch around the corner from the ticket window into the little lighthouse museum where we study a scribbled copy of the name that offically stands on the list for the year 1899, when an Horatio W.S Adams was senior lighthouse keeper. 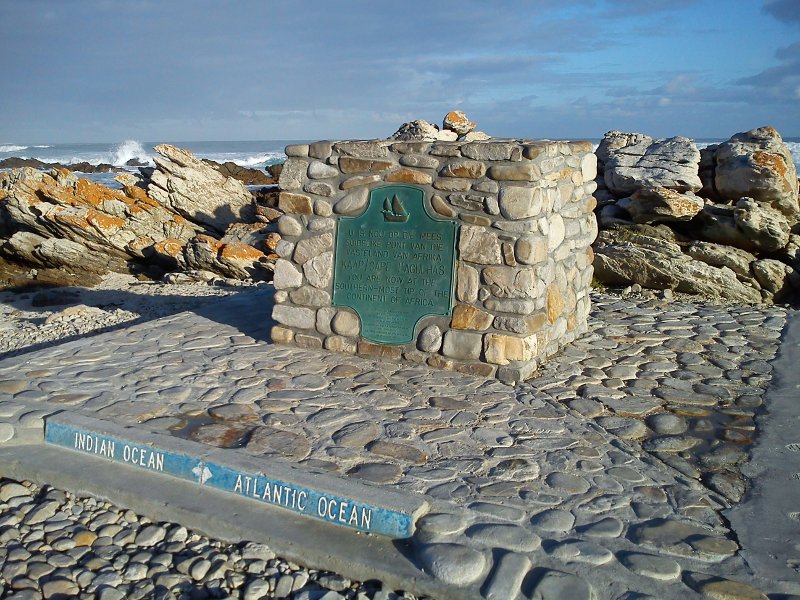 It all feels a little underwhelming, really. Shouldn’t we have a certificate or a medal or something? A relative of my husband’s used to run up and down these ladders for goodness sake, that’s something momentous (you have to see the ladders to understand).

Having caught sight of the ladders, as I mentioned, I use the museum (I don’t usually do museums) as a means of stalling. You see, I’m not fond of heights, something I appeared to forget in bustling everyone in the car to visit L’Agulhas – peanut butter sandwiches assumed far more importance at that moment. I’ve also done the maths – there must be numerous other ‘ladders’ before we reach the top.

In the museum I find out that the lighthouse has stood here since 1848, modelled on the Pharos of Alexandria in Egypt (I struggle a little with this concept – weren’t they pyramids?) until I realise that they refer to the lighthouse of Alexandria, one of the Seven Wonders of the world. What did blow the mind was that it was built between 290 and 247 BC on the island of Pharos in Alexandria to guide sailors into the harbour at night. 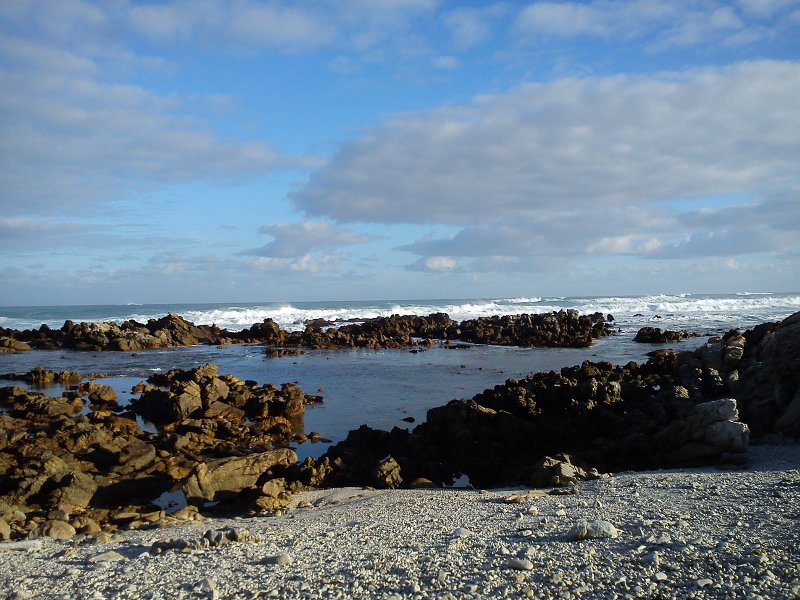 If you consider that over 2000 ships came asunder along the coast of South Africa since 1500 AD, and that it took South Africa until 1840 to build this particular lighthouse, you can appreciate that calling our society ‘developed’ might be pushing the envelope. I can happily share with you, however, that the Pharos was indeed built by a pharaoh – Ptolemy – who died before it was finished (that’s the Pharos, not the lighthouse at L’Agulhas).

Once you’re on the series of ladders there is little space to manoeuvre, hence you can’t really turn around. And there are at least four and successively narrow and more harrowing renditions on a theme, the higher you go. But if you hold on tight and don’t look down, you should be fine. Seriously, if I can do it, so can you.

On spilling out onto the first platform outside, however many storeys up, I remember that high buildings make me want to jump. And the thought of ending it all alongside the couple making out on a bench below us was not my idea of a fitting death. I spent the bulk of the time crouched down, my back against the lighthouse, breathing deeply and taking pretty shots of the sea. 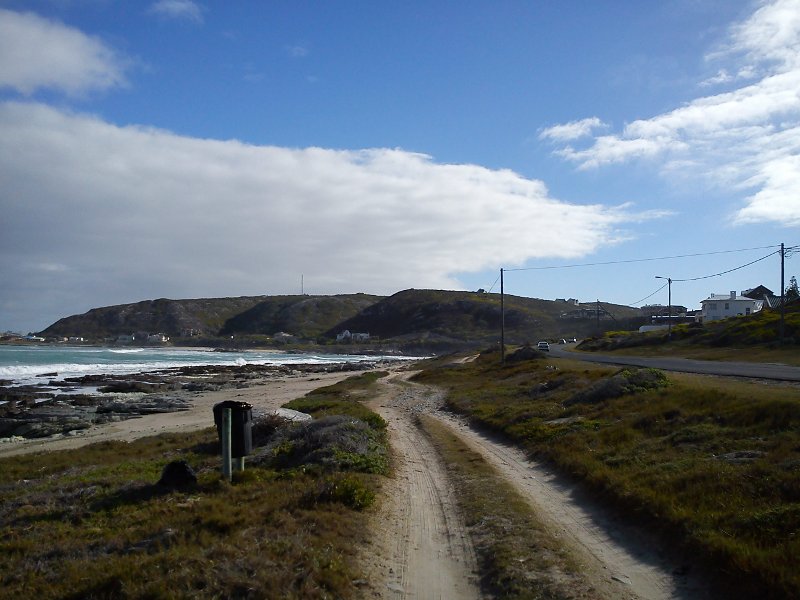 My mother-in-law’s camera is probably filled with my terrified expression as I grimaced my way through the obligatory family pics, the sea in the background. I will spare you the details of my experience on the way down the ladders. After climbing the lighthouse, it is fairly obligatory to head down to the beach, where there is a boardwalk along the beach via rocks, rock pools and the marker, where I photograph an enthusiastic Spanish couple.

Just south of here begins the Agulhas National Park right on the rugged and beautiful coast, where you can stay overnight. I watch as a huge over-land vehicle belonging to a German company with a very obviously European journalist and photographer onboard heads into the park. Next time.