The wind blows a lot out here, and it’s closer to the truth to call the Milnerton market something of a boot sale, but if you’re in the mood for hunting up a bargain or rummaging through genuine antiques, and getting them for a song, then you can overlook the old car parts and inevitable Chinese ‘very cheap’ toy stalls for the sheer joy of making a find!

We got chatting, soon after arriving at the market, to the seller of socks. Almost at the start of the market stands a stall that has a sock collection of note. I’m not usually in the market for socks, but mohair socks for winter were suddenly an imperative, particularly as, with much digging, muttering and re-arranging, a tiny pair (‘kept specially for my clients with small feet’) was hauled out for my son, for whom finding a pair of warm, thick winter socks is rather like looking for a needle in a haystack (if the average chain store is anything to go by then children’s feet don’t feel the cold). 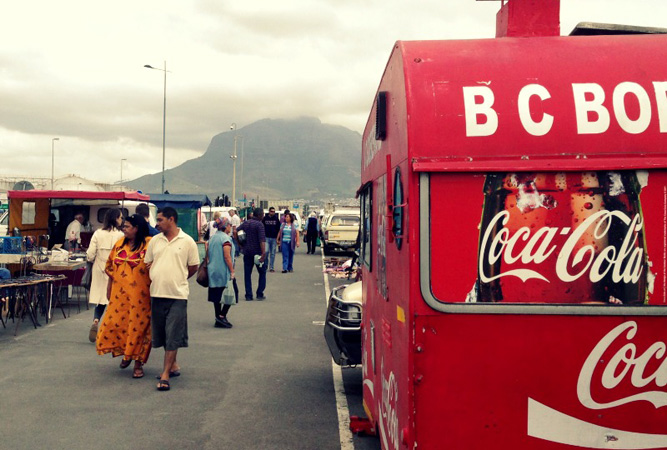 The Milnerton Market lies on an open piece of land smack bang next to the R27 in Milnerton every Saturday and Sunday from 07h00 until around 16h00. It lies on a sliver of Paarden Island closest to the sea that is, to say the least, rather exposed. This is a section of reclaimed land close to the beaches where the intial white settlers to this country landed, which serves as something of a metaphor if you consider that for many of the stall holders, the market is an attempt to regain a place in the city’s economy.

The market is divided into two or so rows of stalls that stretch for miles (or so it seems) up the R27 and include some good food stalls to make sure you won’t go hungry – if pancakes and boerewors rolls are your kind of thing, then they’re great to stave off the hunger pangs.

If you’re a market snob, more inclined towards the local food markets that have taken Cape Town by storm, then you’re better off heading to the Neighbourgoods market in Woodstock or the Earth Fair market in Tokai. But if you want a good old fashioned ‘anything goes’ market, then Milnerton is a great place to while away a morning. I realised, after milling around for a time, that it was the market’s lack of pretention that made me slightly uneasy, so used am I to a more structured and aesthetic market environment.

I was to learn that, if you’re prepared to stop at a stall and look interested, just about every stall owner has something of note to impart. At the sock stall we learned that a particular blend of mohair would cost us double anywhere else. When this incredible piece of information didn’t seem to affect me, the sock seller hauled out a much fingered version of a newspaper article about mohair socks and proceeded to read passages virtually by rote. This was quite a performance if you consider that I was going to buy the socks anyway! 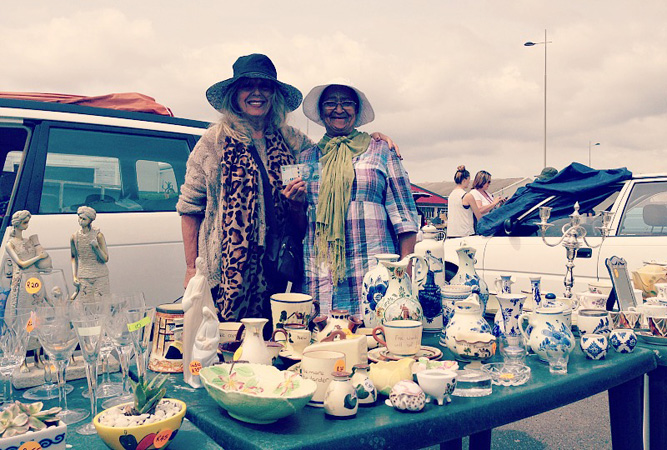 If you’re into retro fashion, then one or two of the antique stands usually include a couple of suitcases of clothing through which students are generally rummaging in search of that ‘just divine’ polyester print dress for next week’s party, and there are certainly some gems in amongst the myriad stalls that line the side of the road – I can imagine that if you are a designer or artist then Milnerton could be a finder’s treasure trove! Bone china sits alongside old pots, fat Buddhas and tin cans, lanterns, candlesticks and the odd collector’s chair are all there for the taking – you just need a fair amount of persistence, and an eye to spot a bargain.

Glass bottles, plants and endless book stalls lie alongside Chinese bowls and spoons and old camera equipment. The secret to making a success of your trawl through the Milnerton market is not to become immune. There are so many stalls that after about twenty minutes one begins to lose the impulse to dig through items. I became totally overwhelmed at the amount of ‘stuff’ to be had, and the number of car parts on sale had me reeling! Perhaps it’s a great way to pick up a cheap coil or whatever, but the thought of selecting a spare rearview mirror or picking out a window winder did not appeal.

We were drawn to a stall selling hannepoort grapes, virtually from the back of a bakkie – most of the stalls operate this way – where we soon learnt, watching money and grapes changing hands, that a level of haggling was expected of us. Trying to get someone to lower his price doesn’t come naturally to me, but it does pay off. Both parties feel as though they’ve got something out of the deal (would that supermarkets operated that way!)

If you’re even vaguely addicted to collecting junk, then Milnerton’s market is the place for you! Oh, and did I mention the plethora of toy trains?