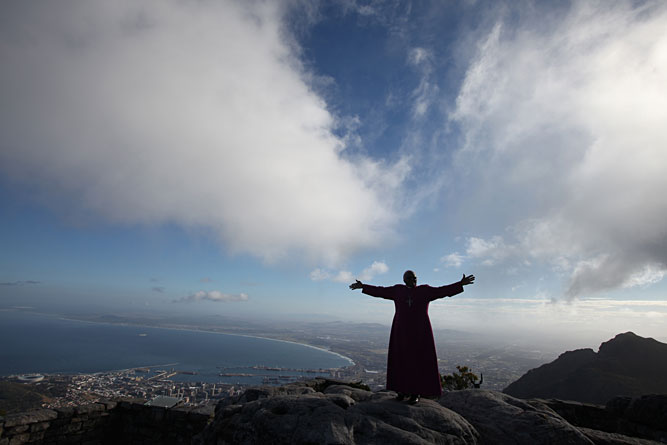 “To the people of South Africa, the Table Mountain Range represents a great deal more than the rocky remains of millennia of sediment. It is of immense ecological, cultural, religious and economic significance not only to the Western Cape Region, but also to the rest of the country.”

Table Mountain is the only contesting site in a country with three living Nobel Peace Prize winners who are supporting its cause. The Vote for Table Mountain campaign now has three iconic South Africans, who have played a significant role in the restoration and growth of our rainbow nation, promoting the success of our beautiful mountain.

FW de Klerk, who received the Nobel Peace Prize in 1993 along with Nelson Mandela said: “Table Mountain is the defining visual icon of [link_cape_venues]Cape Town[/link_cape_venues] and [link_sa]South Africa[/link_sa].  It has been the backdrop to the unfolding of South African history. Its imposing stature makes one forget that Table Mountain has more plant species than all of the United Kingdom, hence its declared status as a World Heritage Site.

“But Table Mountain does not belong only to the Western Cape. As a National Park it belongs to all of us in this country. As a World Heritage site, it belongs to the International Community. Elections seldom unite a country. Occasions do. Last year the soccer world cup united us as a country. Soon the rugby world cup will unite us behind our Springbok team. But now we have an election that can unite us again. Vote for Table Mountain as one of the New Seven Wonders of Nature. I just did. Your turn now.”

Table Mountain is South Africa’s only candidate in the running to be named one of the Official New7Wonders of Nature, with voting closing on 11 November 2011.

“I really can understand how, when God created all that there is he said, ‘I think I’ve got to do something special here’. And so God produced this fantastic gateway in the South – Table Mountain – our mountain, what a wonder! Help us take our rightful place among the New 7 Wonders of Nature,” says Arch Bishop Desmond Tutu.

Vote for Table Mountain SMS “Table” to 34874 at R2 an SMS, or …
Visit votefortablemountain.com, or …
Vote via Mxit for only 20 cents.
(If you vote via SMS or Mxit, you can vote as many times as you like!)