I must be honest and admit that we did this hike in reverse. Well, not exactly reverse, but we opted for the clockwise direction, whilst the hike, when you take the time to read the description, actually recommends that you take the anti-clockwise route in order to the avoid the rather obvious uphill slog to Wolfkop – ‘The anti-clockwise direction avoids a long slog up the Wolfkop steps’. 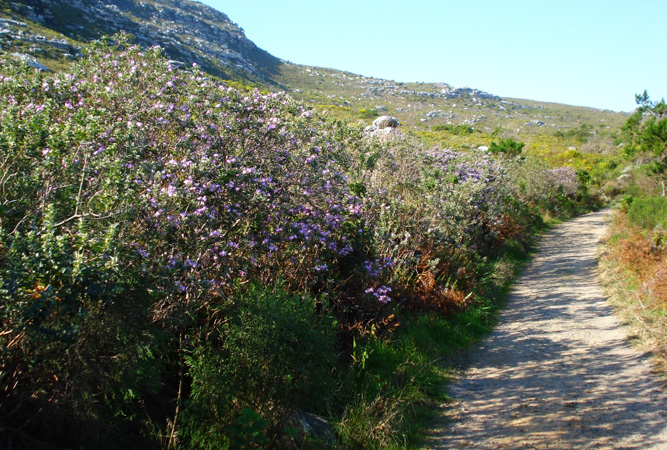 But hey, all things being equal, we felt we got a good deal from our hike. And the advantage of doing it this way (the clockwise route, against recommendation) is that you get to see really great views over the Constantia Valley and Muizenberg far sooner than the other more sedentary version of the hike.

I must just add that it takes planning (something we’re not always great at) in order to set off for the Higher Steenberg Peak along the recommended jeep-track past the waterfall at Silvermine’s Gate 2. This is because the hike is so obviously signposted at the start of Gate 2 in the other direction, away from the jeep track – so I think we can be forgiven for going the way most people would go. 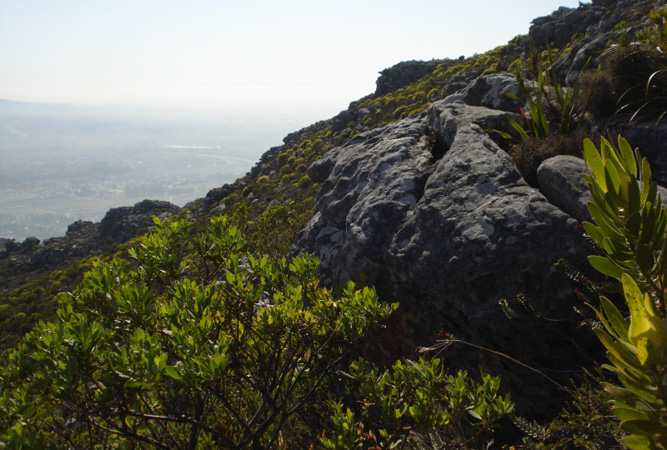 After leaving our car with the more than jovial car guard in the parking lot (your car is safe with him), we obeyed the sign and headed up towards Wolfgat. Map in hand, sun beginning to head for its midday position in the sky, the first few minutes of the hike were lovely, filled at this time of year with fynbos, and the path easily discernable.

After roughly 15 minutes of ambling, the walk starts to take a pretty steep turn as one heads up the Wolfkop steps. For most fit hikers this would qualify as a moderate incline, but we are anything but fit and rely instead on our natural enthusiasm for walking to get us up hills and down dales. Not a bad strategy but when it comes to scaling great heights, not recommendable. 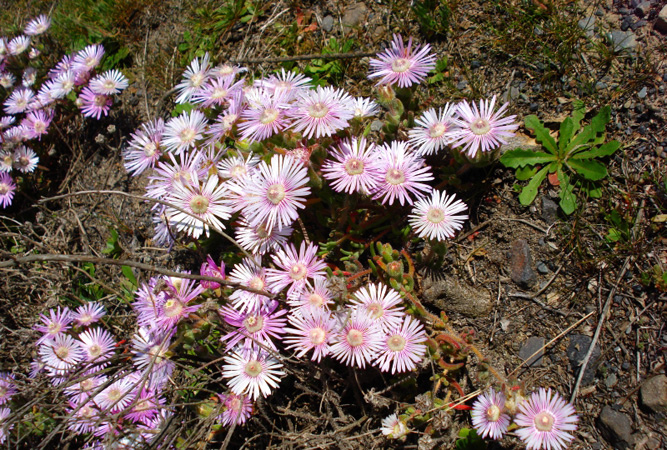 Nonetheless, the views even from part-way up are well worth the exertion. Ou Kaapse Weg stretches out below one and the vista extends across to Silvermine West, Constantia, Elephant’s Eye Cave and the back of Table Mountain all the way to Devil’s Peak, depending on the level of the light (hazy days are not as great).

From the top of Steenberg Peak there are uninterrupted 360° views that are awe inspiring and well worth the steep steps to reach it. On the one side one can see all the way to Long Beach in Noordhoek, and on the other all the way across Marina da Gama and Muizenberg to False Bay. This is where we broke for reflection, something to nibble, and to drink in the views. How lucky are we to have this on our doorstep?

And the rock formations in particular are fantastic. Some are stacked in a way to emulate caves, others look so precarious, as if they may at any moment tumble from the position they have held for who knows how long. No surprise then that there was a prevalence of lizards sunning themselves on the rocks. Blue headed iguanas and other smaller versions were obviously not fussed by our presence and soaked up the necessary rays really close by. 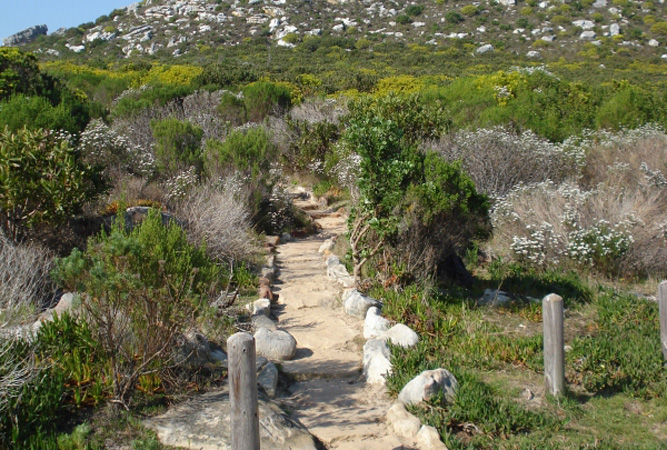 You head up the gully between Splitkop and Steenberg Peak. Because most of the initial hike takes place on the northern slopes of Silvermine there is a predominance of the most incredible fynbos. Vygies were already beginning to show their faces to the sun, clusters of flowering fynbos in yellows, purples and pinks grouped together gave pause for thought, whilst the path now levelled out, even if it was still climbing as we headed onto the seaside of Splitkop, and allowed us to drink in the beauty further still.

Most of the vegetation on this side of Silvermine was burned in what is known as the ‘great fire’ of 2000. As a result much of it is young and you can see hundreds of flowers around the year – particularly proteas, and mountain dahlias. Pick up a copy of Cape Peninsula by Mary Maytham Kidd if identifying the plants and flowers is important to you. 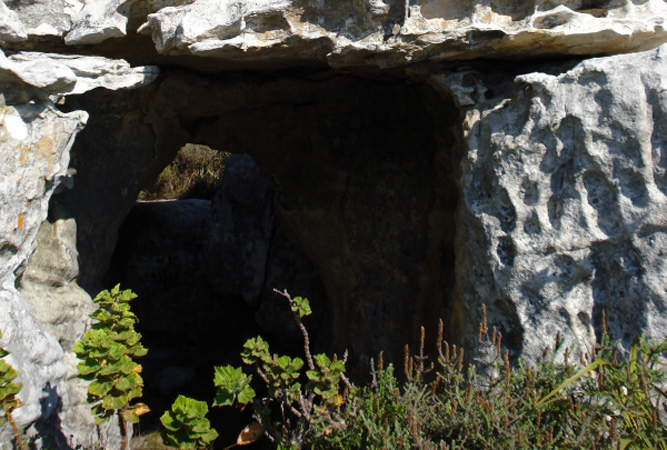 One of the most wonderful aspects to this hike is that great swathes of land here is utterly undeveloped. When one is not looking out over the city one’s frame of reference is instead the joy of being completely emersed in nature in a way one can seldom do. There was no sound of man. No sight of man. And this not even 30 minutes from home…

From here one can extend one’s walk to include Muizenberg peak (if you want to make a day of it), where you will be able to add views over Kalk Bay to your list of sights, but we chose instead to descend past the radio masts and met up with the original jeep track to head towards Junction Pool, even if we did miss it!

By this stage of the hike we were beginning to flag and a stop for lunch was definitely in order. We found a spot down next to the stream, the sound of running water a balm for our tired legs, and the food a way to reinvigorate ourselves. 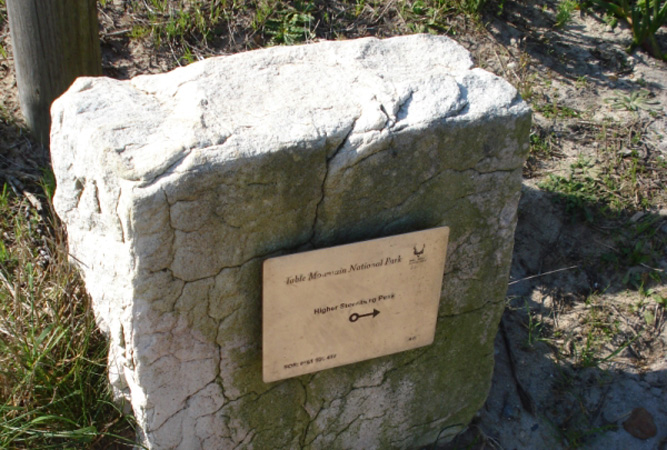 The latter part of the hike joined the path that is used by many for walks over weekends (the jeep track). This wasn’t a weekend so we were lucky enough to have the place to ourselves. This part of Silvermine takes one past Maiden Pool and back to the car park at Gate 2. It is easy to walk, has beautiful views, and runs parallel to Ou Kaapse Weg for some way, allowing unusual views out over Noordhoek.