The pipe track, above Clifton and Camps Bay, can be a leisurely stroll or a strenuous jog, depending on your needs or your mood of the morning. It is easy to reach, easy to follow, relatively easy to walk (depending on the pace of your hike) and great for kids.

It is also one of the most sociable hikes I’ve been on. It is very similar to the Constantia Nek contour path from Constantia to Kirstenbosch – a hike with very few ups and downs, and extremely popular with locals and their dogs. If you walk it on a weekend expect to pass or be passed by another party at least every five minutes, if not more frequently, especially if you’re on the pipe track around midday. 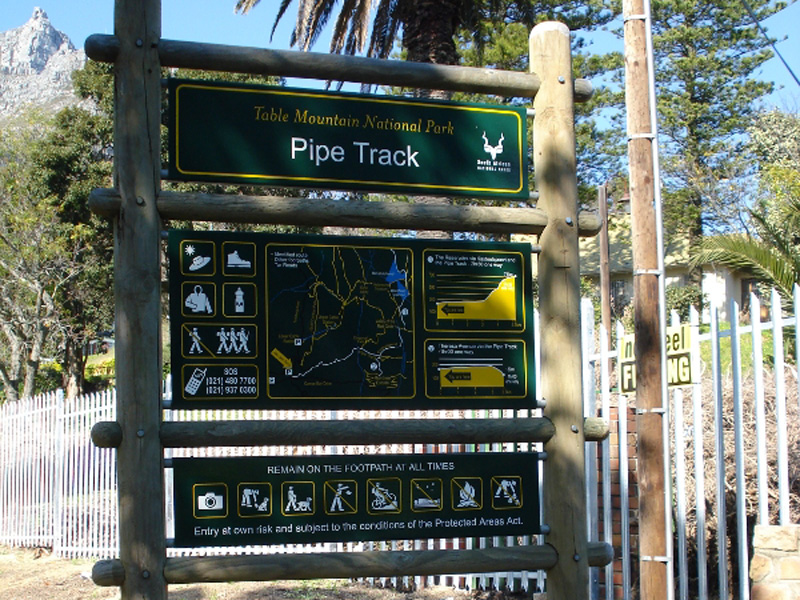 On a perfect windless winter’s morning, the pipe track is up there with going to the beach; a stroll in the park comes to mind it is so pleasant to do. And the views are the reason you head up here. The start of the walk is at Kloof Nek. Don’t get confused as we did and assume that there is a parking lot for this walk alone. There isn’t. You turn in at Kloof Nek as if you are going to head up Table Mountain in the cable car, but park at the bottom parking lot on your left.

Crossing the road to reach the steps up alongside the waterworks’ cottage is probably the most dangerous aspect to the hike, and you will more than likely start alongside at least another two or three parties setting off. The route you follow is from Kloof Nek to Slangolie Ravine (roughly an hour and a half each way) but you can at any stage of the walk, turn back and head home, which is part of the joy of the hike. 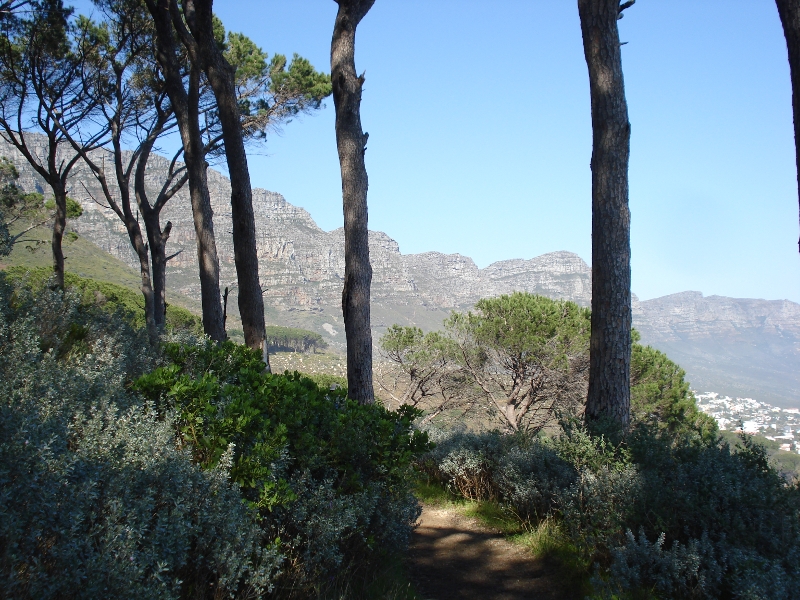 Once you’re up the hill, the pipe track runs level with the path almost all the way, although you only see snatches of it. To your left is Table Mountain – not an aspect that is familiar as it is the western flank of the table – but you do get to see the cable cars enter and exit the top port.

Alongside initially, and then behind you, is Lion’s Head in all its splendour and, as you progress, the Twelve Apostles extend ahead of you. The combination of mountains and sea is heady stuff.

Right from the word go you are aware both of Camps Bay and why the hike is named the pipe track. As you round the first bend, you will see the pipeline as it crosses a small ravine, and will likely stumble across a series of aqueducts along the walk (don’t expect anything glamorous, they’re simply cement blocks on which a series of numbers are posted in red). 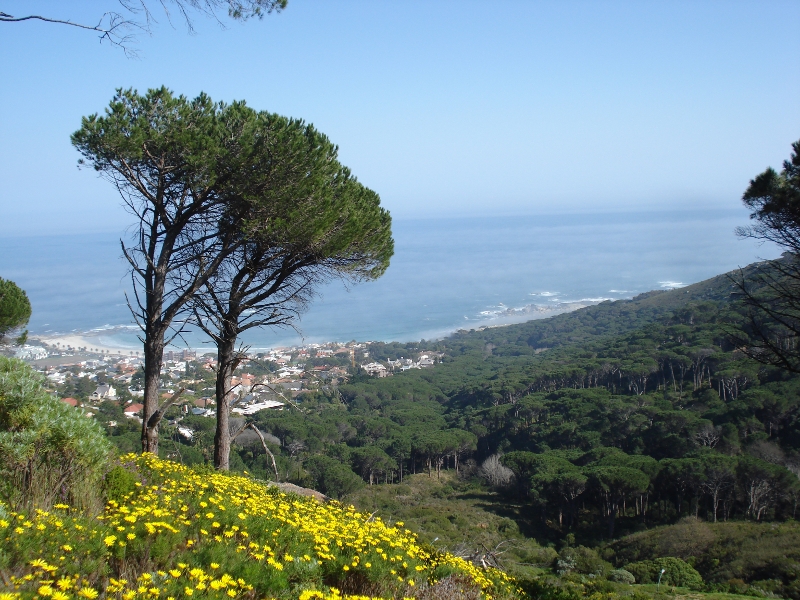 Water still runs through these pipes, which brought Cape Town its first clear water in 1938. Before that any water coming into Cape Town was brown, in similar fashion to the water one sees in numerous streams in the mountains around Cape Town.

A little further along the walk, you will pass beneath a brick building called the Woodhead Reservoir, the Kloof Nek filtration plant. Much of the walk is shaded by a series of stone pine trees, enormous as they stand along the pipe line.

There are one or two dips along the path, but the major one to look out for is the plunge (if you can call it that, as it is really slight) into Diepsloot gully, but this is quite far into the walk. Up and out of it and you head into a couple of quarries and the Matthew Jackson Gully, now closed to the general public, but which was frequently used as a route up Table Mountain (incredibly steep but it would not have taken too long if you were fit). 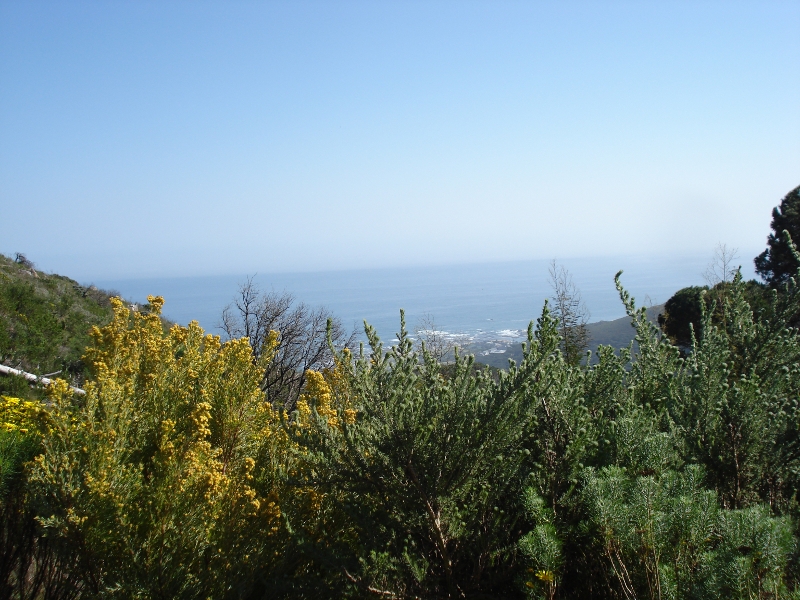 The views out seaward are incredible. From up here you would easily see whales in the bay, if there were any, and we watched as a few people headed onto the beach below – little ants in their toyland cars, as my four-year old son described them. The mountain side was strewn with little winter daisies, also known as Euryops abrotanifolius, and the odd protea still in the bud stage.

The lush smell of metalasia in the heat of the sun as we progressed reminded me of ripe figs, its smell lingering on our clothes as we brushed past bush after bush, and the joyful play of purple, yellow and white fynbos blossoms in the soft light of winter lightened even the most melancholic amongst us. 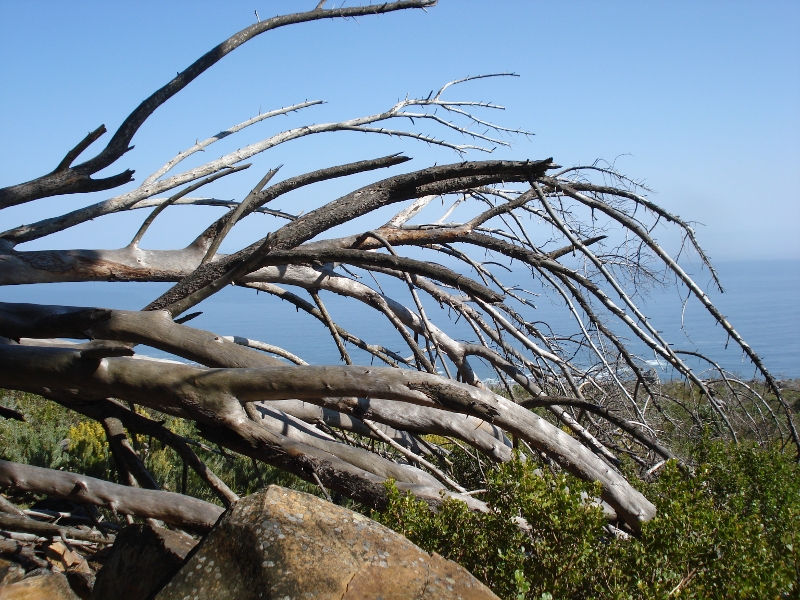 The walk winds on, continuously above Camps Bay until you hit Blinkwater ravine  (formerly known as Stinkwater) where, after about two hours, due to numerous stops en route (a walk with a young child is never straight forward) for snacks, fruit and water, we collapsed under a series of big pine trees.

Whilst my son and I stared out over Bakoven whilst seated in the lower branches of the pines, and watched a yacht pull in and drop anchor in Camps Bay, whilst pretending we were a fairy queen and her prince, who draped my hair in various twigs and made me meals in the fairy kitchen at the top of a huge granite rock, my other half continued briefly through a forest and out beneath the Blikwater peak.

Just here above the suburb of Rontree (I hadn’t heard of this suburb before doing the walk) you can join the pipe track in Theresa Avenue. It is more of an uphill but you get to do the walk the other way round – towards Lion’s Head, although I would recommend doing it the way we did, from Kloof’s Nek. 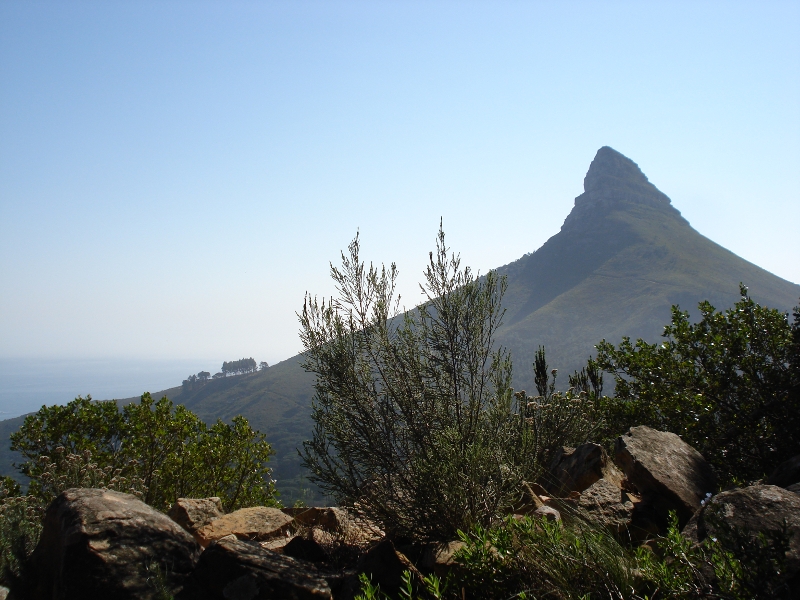