Belgravia is Kimberley’s most posh suburb. Like its London counterpart, which lies just behind Buckingham Palace, Kimberley’s Belgravia lies close to the city’s major tourist attraction, The Big Hole.

In fact, the land on which Belgravia lies was once a farm called Bultfontein, owned by the London and South African Exploration Company – a group of individuals considered, by all accounts, unscrupulous landlords.

Most of the houses and buildings in the area were built during the 1880s, Victorian in style, from Kimberley bricks – deep orange/red, handmade and pressed – with corrugated iron roofs and fences, their wide verandas, on at least three sides, an enviable feature even today…

There are a few that still sport the turrets, gables, pilasters and original cast iron fences from the period – the more decoration of this kind, the wealthier you were (something like swimming pools, high walls, and double garages today).

Apart from the bricks, just about all the building materials were shipped in from Europe and then sent by ox wagon and rail to Kimberley.

In short: a stroll through this neighbourhood will leave you seriously considering whether your pad in the southern suburbs of your chosen city isn’t worth throwing over for a period home at more-or-less the same price!

The walk includes 30 historic buildings and sites. Here are the highlights of Kimberley’s Belgravia Walk … 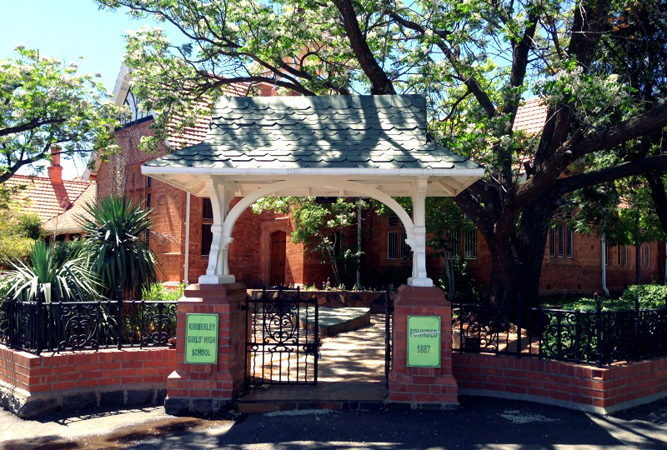 This beautiful building, diagonally over the way from 22 Elsmere Road (see below), has stood here since 1887, designed by the architect DW Greatbatch (many of Kimberley’s buildings were his designs). The school used to have boys and girls in separate wings of the building.

Where: corner of Elsmere and Rendlesham roads

The bright red, Coke-dominated Mac’s Café was one of my favourite surprises. Its modern façade (it’s a fresh convenience store selling cool drinks and chips and makes a good pit stop) gives no indication that perched on its roof is the gable of the original Druggist shop, run as a pharmacy for years. 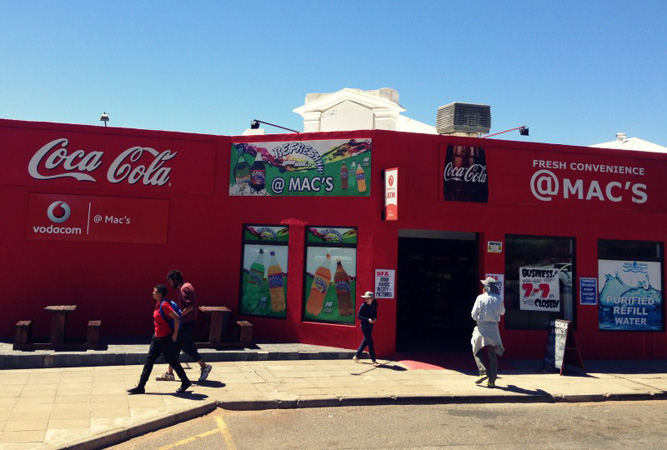 Make sure that you include this on the walk. Not only is it a rather handsome building, but inside is one of the most beautiful examples of stained glass windows in the city. The gorgeous oak staircase is pretty impressive as well.

This is my all-time favourite house on the Belgravia Walk. The present owner, archaeologist Davis Morris, the grandson of HA Morris – who not only lived here for 50 years but was also a Freeman of the city – should be lauded for maintaining the house almost exactly as it would have been back in the day. 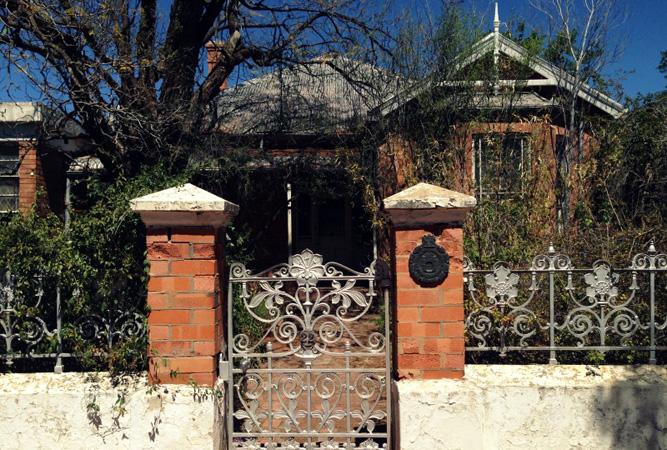 This was one of the most beautiful examples of domestic architecture at the turn of the century, when it was built. It still boasts the original wrought-iron fence, imported from Glasgow, and if you look carefully you’ll see that they built a summer house on the roof as a retreat from the mozzies in a bid to catch any cool breezes. I wonder if it helped? My perception of rooms in the roof is that they’re even hotter than the house.

Where: cnr of Regiment Way and Park Road, close to the beautiful Cathedral Church of St Cyprian the Martyr and the chapel of Sister Henrietta Stockdale

I’ve included the Oppenheimer’s current residence not only for its beauty, but because I was struck by its simplicity and lack of ostentation. The Oppenheimers are of the wealthiest people in South Africa, and admittedly have various homes across the country, but the house is a one-storey Cape Dutch style building, built in 1907, with a beautiful, indigenous garden. No high walls or electric fences. 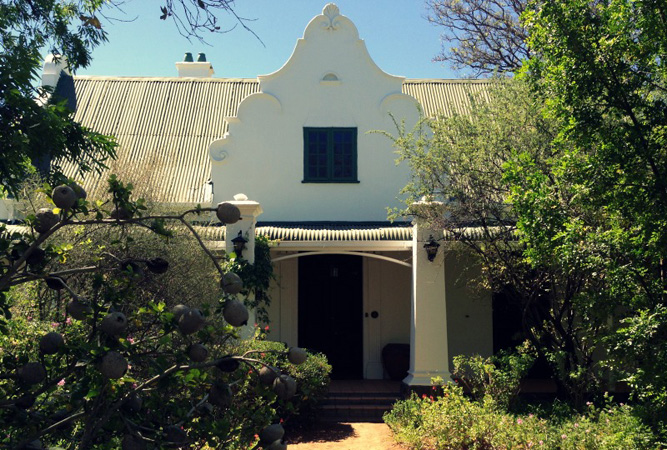 Wow. What a home this must have been. Dunluce was also designed by DW Greatbatch and built in 1897 for a member of the Diamond Syndicate, who was also the Director of the Diamond Fields Advertiser, Gustav Bonas. The late Victorian house still has its original wooden façade and most of the original furnishings. You can contact the McGregor Museum if you want a tour of the house.

If there is one gallery or museum that you visit, make it this one (and the McGregor Museum, of course, housed in the Sanatorium). The photographic exhibition of Alfred Duggan-Cronin of southern Africa’s indigenous people, taken between 1919 and 1939, reveals a traditional life now largely vanished. I was struck by the courtesy and care with which the photos were taken.

Where: Egerton Road, or walk across the Alex Hall Memorial Garden from the McGregor Museum 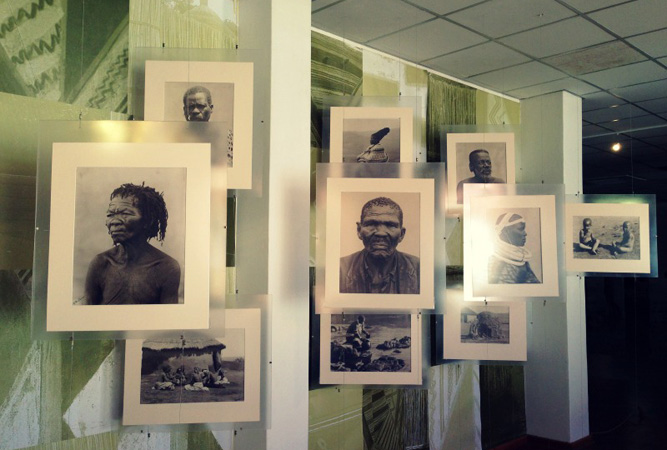 The haunted house, Rudd House is one of several venues on the Ghost Walk in Kimberley. You just have to get a look at its low eaves, and the way it is set right back from the street, to imagine that the paranormal claims of a baby crying in the nursery, the shattering crash of cutlery and crockery falling to the floor, and the sound of breaking glass just might be true. For a tour of the house contact the McGregor Museum.

Where: cnr of Harley and Hemming streets 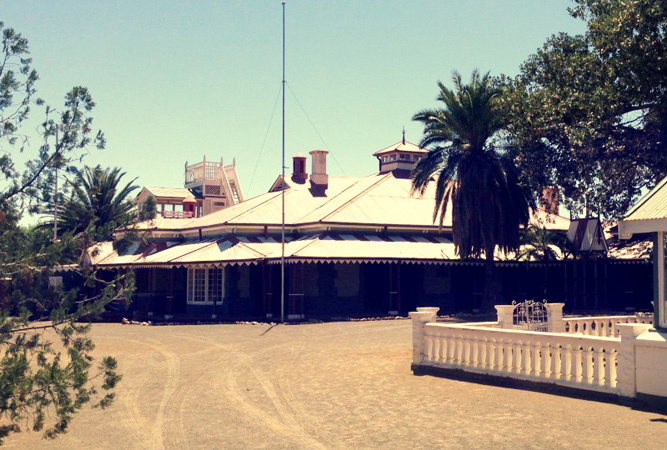