Now reading: Take a ride on the Inchanga Choo Choo

The Umgeni Steam Railway is the non-profit society behind the thrilling Inchanga Choo Choo – the train that takes its passengers on the first and last Sunday of every month, twice daily, from Kloof to Inchanga Station in KwaZulu Natal, a beautiful colonial station built in 1895, pulled by a steam locomotive called Maureen.

Maureen debuted with the Umgeni Steam Railway after 70 or 80 years’ service with the South African Railways and was originally built by the North British Railway Company in 1912 – no surprise that her capacity for speed has slowed to a limit of 60 kilometres so as not to place her under too much strain. 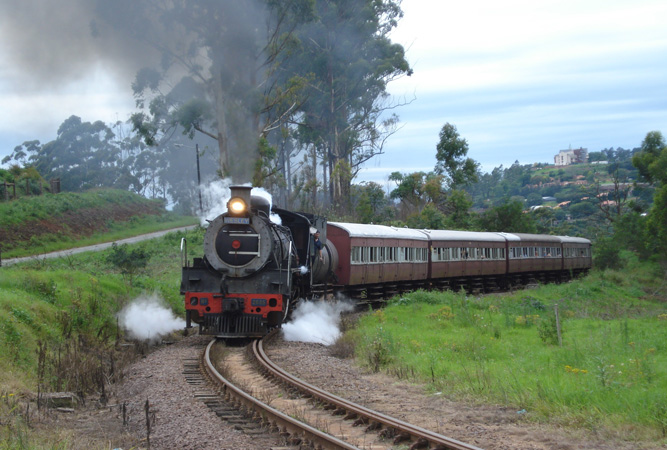 One is immediately transported back in time by the sheer exhilaration of the general hustle and bustle as Maureen shunts carriages back and forth, before letting off a mighty blast of steam as she whistles her intention to depart. The train runs along the edge of the beautiful Valley of a Thousand Hills in KwaZulu Natal.

The Choo Choo is the Umgeni Steam Railway’s main stream of revenue with which they fund the restoration and maintenance of their incredible collection of locomotives and rolling stock, and it makes the already exciting trip – particularly if you have children who are totally enthralled by the occasion – that much more worthwhile to think that you’re keeping an old tradition alive.

The Umgeni Steam Railway is largely run by enthusiasts of the steam train who volunteer their time to the organisation. They also run trains from Pietermaritzburg to Baynesfield and Wartburg in the Natal Midlands.