This groundbreaking book is a world first, depicting the Great White Sharks which dominate the False Bay area and present a unique hunting behaviour of breaching during predatory events – and is the only book of its kind in print. It is soon to be a South African bestseller! 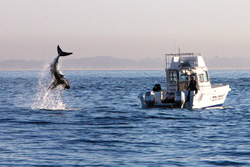 The book contains spell-binding photography of the Great Whites breaching and hunting seals within the False Bay area, as well as delving briefly into the life cycle of the Cape Fur Seal, Seal Island’s history and False Bay, without diverging too much from the awesomeness of the White Shark hunting these waters …

The Great White shark is undoubtedly one of the most well-known and most awesome apex or macropredator of the seas. It is the largest predating fish on earth and has earned a much maligned reputation as an indiscriminate man-eater. 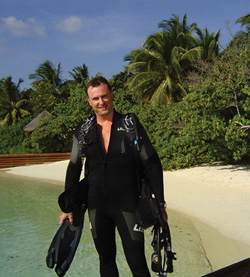 Despite the enormous popular and scientific interest in the Great White, it remains one of the least understood of the sea’s creatures. Its combination of size, menace and mystery, make the Great White Shark a modern day ‘monster’ that many people find irresistible.

The book is not meant to be sensational, but rather a true life reflection of the natural cycle of life at sea, and a guide to understanding one of the planets most awesome predator.

Quaint and Vibey Kalk Bay: Kalk Bay is a beautiful, somewhat bohemian, fishing village on the outskirts of the suburbs of Cape Town. It is completely different from any other part of the Mother City, and attracts a very diverse combination of tourists and loca...

What better way to spend the last weekend of the holidays than with three little boys in a tent just half an hour from home? In theory. The fact that we needed a weekend to recover from the weekend aside, camping, whilst remaining at home, has a lot to recomme...

The Indian and Atlantic Oceans of South Africa are home to plenty of intriguing marine species. For decades, humans have had a fascination with what lives beneath the salty surface of the sea. Now, thanks to technology and a better understanding of the faun...