A very worthy cause was recently brought to our attention and we thought we’d support the cause by giving away 10 of these beautiful SAGA (South African Guide-Dog’s Association) calendars, which feature photographs taken by 13 top South African Wedding Photographers. Simply complete the easy entry form (competition closed – view winners), find out more about how the calendar came into being or, if you’d rather not wait to win, order your calendar and support SAGA and the important work they do.

For those of us who can see and who can move freely through the world it can be hard to understand just how dependant a blind person can be on those around them. Being dependant on other people can be debilitating, soul destroying even. But being able to travel to and from work, being able to walk to the shops … these things, in the words of many guide dog owners, have quite literally been a god-send. 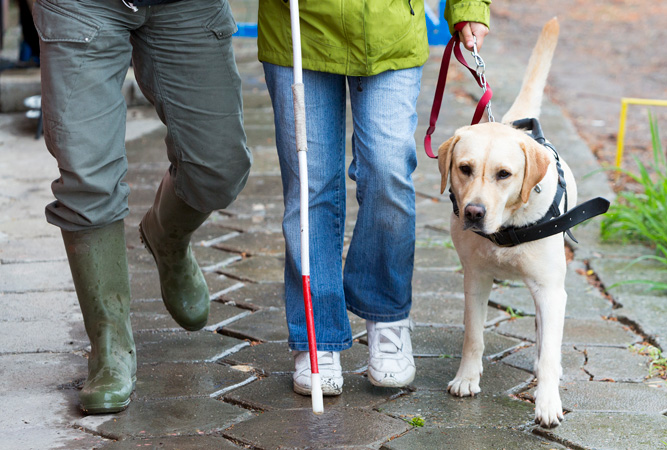 How the Calendar Came into Being

The 2010 South African Guide-Dog’s calendar came into being because of the calloused hands of a blind man. It seems a strange beginning, but one which led to thirteen fantastic wedding photographers from around the country agreeing to donate their time and talent to photographing guide dog owners and their dogs.

In 2007 a young Cape Town photographer, Roberta Crumplin, was struck by the cheerfulness and energy and incredibly calloused hands of a blind man collecting money in a shopping centre.

In chatting to the man, Roberta discovered his name, Roy, and that of his guide dog, Xass. She discovered that despite his blindness he had put his three children through university; that he ran a cane workshop for blind people, and that he was in fact collecting funds for an old age home that he was concerned about. His ability to do all of this, to move freely through the world, was as a direct result of having his guide dog. This was a man who didn’t simply sit back and allow life to happen around him, this was a man, who quite literally, got his hands dirty and worked, really hard, for everything that he had in his life.

Inspired by his sheer tenacity and determination, Roberta wanted some way to take Roy’s story further and so the 2008 Western Cape calendar came into being.

Roy was one of the first guide dog owners to be photographed for that calendar. Shot in his workshop, his deft fingers weaving the arm of a cane chair, and with Xass at his feet, Roy was the epitome of inspiration.

The calendar was a great success for SAGA; it helped to raise much needed funds for its new puppy training centre in Cape Town and it showed so very clearly and eloquently the immensely powerful relationship between the guide dog owners and their dogs. It was decided then to do a 2010 calendar that looked at the lives of blind people around the country and to use the insightful photography of some of South Africa’s top wedding photographers: Jean-Pierre Uys, Joe Dreyer, Greg Lumley, Andrea Carlyle, Dror Eyal, Dirk Visser… Testament to the character and generosity of these photographers is that almost everyone who was approached said yes straight without a minute’s hesitation.

SAGA breeds, rears, trains and places all of its own dogs. It is an enormous undertaking. Throughout the dog’s life SAGA stays involved and on hand. Your support of this calendar and of SAGA generally is what allows the organisation to provide the phenomenal and life changing service that they offer for blind people. We hope you’ll buy your calendar today and let it show you exactly what it is that your donation is helping to do – affording people who can not see the dignity of independence and mobility.

This month’s SA-Venues.com competition gives our readers a chance to win a weekend getaway at the Shangri-La Country Hotel & Spa only 70 minutes away from Pretoria Accommodation in the town of Modimolle. Nestled in the heart of the bushveld within the W...