Now reading: Just what they’re getting up to in Hogsback

Starways pottery and the Rose theatre – You don’t expect to find a theatre in Hogsback. Not only is it a theatre, albeit a little one, but it’s open air, in the middle of a glade of pine trees, and named after the Elizabethan theatre of the same name. The Rose was London’s most historic theatre, built in 1587 by Philip Henslowe on Bankside in Southwark and home to many of Shakespeare’s productions.

The Rose at Starways is similarly built mainly of timber, with earth for the walls and, although I would imagine this version is a lot smaller, it is anchored securely by two pine trees conveniently set on either side of the theatre’s entrance. It’s all really rather quaint. There is lighting, a sound system and a series of tables and chairs hewn from logs of wood. 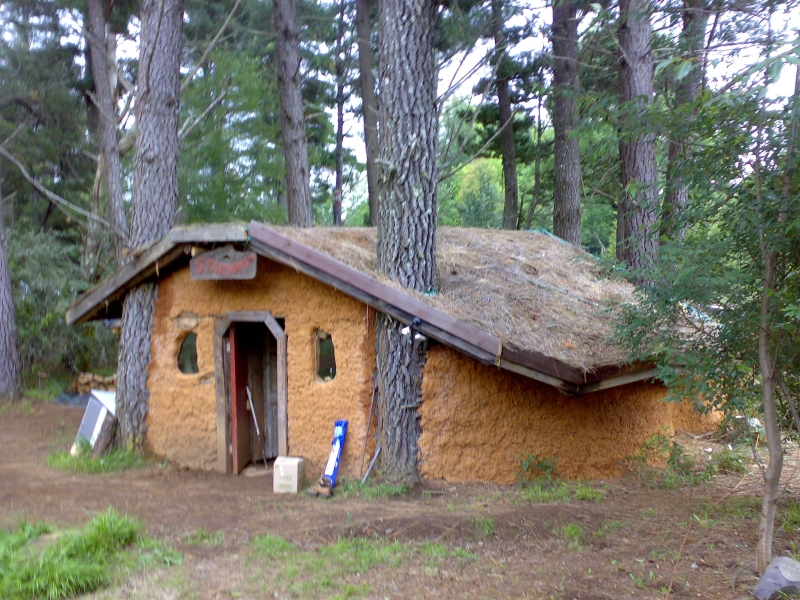 It’s rather like stepping back in time when one arrives at Starways. In the lower portion of the property, in the midst of a pine wood, there rest two eco friendly buildings made from earth and timber, one of which is potter Anton van der Merwe’s Forest Gallery (he is an accomplished painter in watercolour and oil apart from being a master potter), also known as the Gate Cottage Gallery, and the other is the Rose Theatre.

The theatre intrigues us. First of all there is already a group of people happily ensconsed within its walls, who turn out to be relatives of Andre van der Merwe, who look as if they could easily have fallen through time to grace a tavern of similar ilk.

They play cards and chat, and, whilst paying us little attention, happily point in the general direction of the hill to another large building as the one we should visit. We don’t learn much about the theatre from them but we’re happy to follow instruction.

We trudge up the hill to its summit where there sits a wonderful outdoor pottery studio, hewn from timber, earth, textured rock walls and recycled doors – a beautiful stained glass pair of which crown the entrance closest to the hill.

The ramshackle studio is filled with wood-fired pottery, where the artist exhibits, and also produces to ship overseas. Andre shuffles through in a quietly unassuming way, smiles hello, and has little more to say, until we engage him in conversation about his kiln. 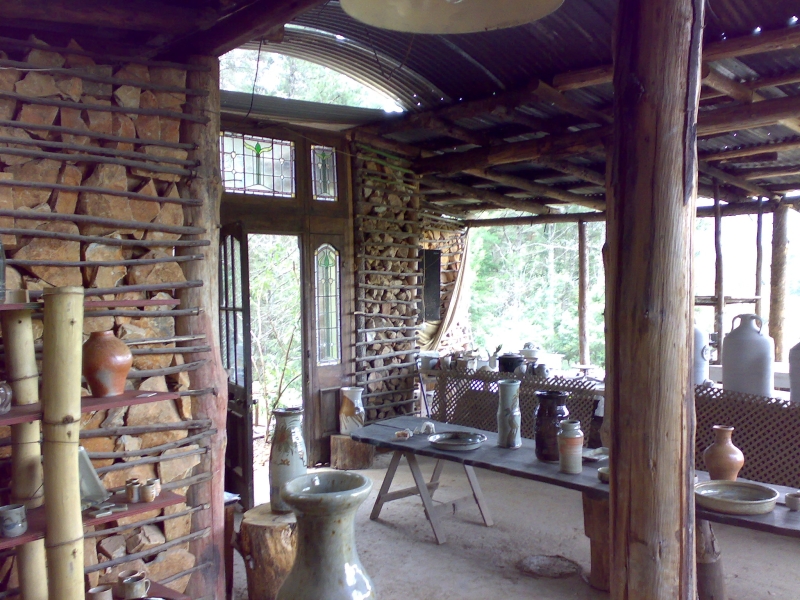 Fuel burning kilns are apparently something of a science. They’re more rarely used than electric or gas fired kilns and it’s a far more difficult technique.

Wood firing and the process of reduction fired ceramic art are the realm of alchemists and Andre expounds about how the temperaturees of this kiln are so hot that they’re similar to those in which the earth was first formed. He continues to talk about the local potter’s clay, which he gets nearby, and copper oxide and how it transmutes and normally turns from green to blood red, whilst iron oxide produces russet reds.

He is in love with his art, and whilst I understand little of it, his love for his work is infectious. His emphasis is on producing works of art that have a useful function, and on a table infront of us I can see large water coolers or storage containers on which he has already begun work. Storage in stoneware allows beverage and food to stay fresher longer.

Anton has lived in these Hogsback woods since 1992. He came to his art largely by a process of self instruction, one he claims allows him greater possibility of doing original and more relevant works.

He apprenticed himself whilst younger to a group of potters that included Bruce Walford, Steve Shapiro, Barbara Robinson, Paul Pepworth and Craig Leslie. He then opened a teaching practice in Cape Town before moving to Hogsback. 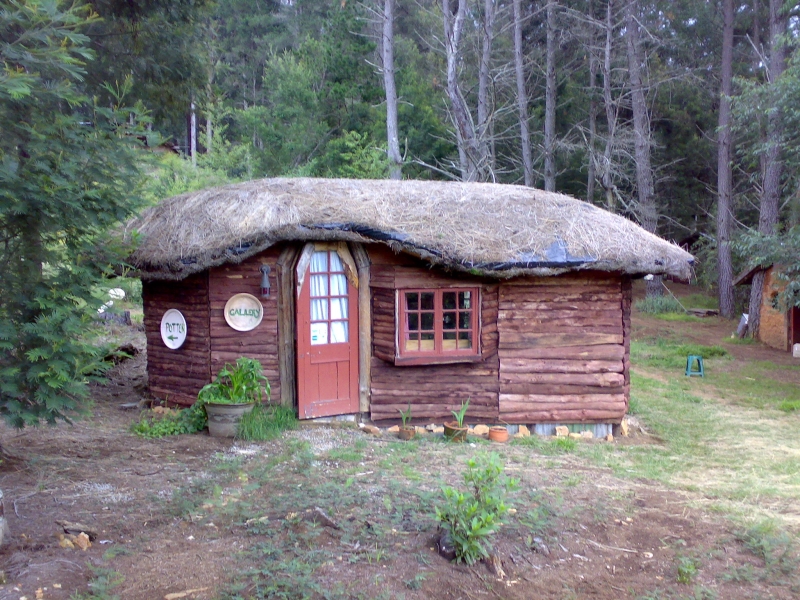 It’s when his daughter wanders down into the studio, en route to the Rose, that I learn more about the comings and goings at Starways. Vale is young, petite and vibrant. You wouldn’t think that she held an MA in visual art or that she had a certificate in personal and business coaching. She’s joined her father and stepmother in Hogsback to work in the open air pottery studio.

From here I learn that Gwyneth, Anton’s wife, is responsible for the performing arts productions in the Rose. She’s an opera singer by trade and has formed a local opera company that draws its members from the two local university music departments at which she lectures – Fort Hare University in Alice, and Rhodes University in Grahamstown.

She’s also a qualified Alexander Technique teacher, which she combines with her teaching method to provide even young singers with tension-free sound. In her spare moments she makes pizzas in a wood oven in the theatre, and jewellery. A pretty necklace which hangs on the wall in the studio has already caught my eye.

As we wander down the hill again to The Rose theatre with Vale to listen to a CD of her brother’s music on sale here, I learn that there is to be a gathering that evening, a staged ‘sit in’ to demonstrate support of the climate conference in Copenhagen, which has only just got underway. There is an avid ‘greenie’ group in Hogsback who are very aware of the injustices being done to the environment. 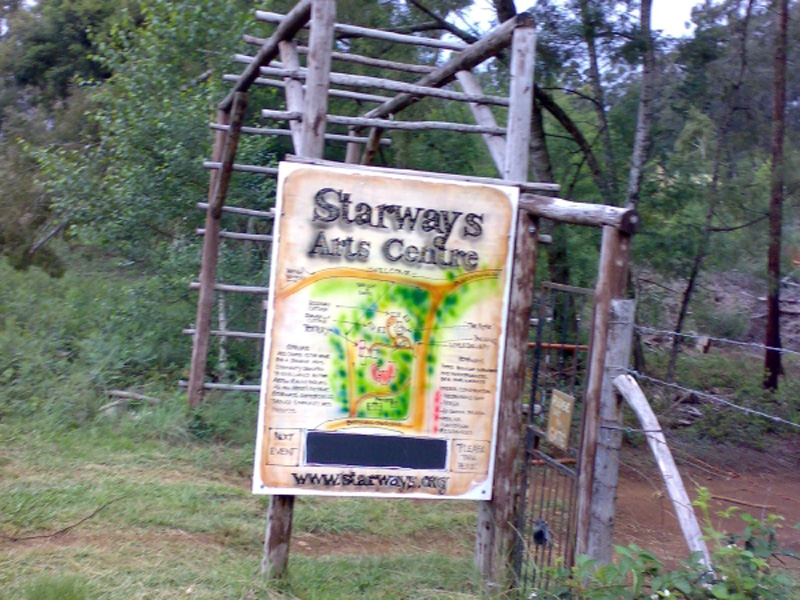 I later learn too that there is a very close relationship between Starways and Mafika pottery, just a couple of kilometres down the road. When in the process of buying the property for Starways, Anton ascertained that Enoch Mafika’s father is buried on the site.

Anton promised that whilst Starways was under his care, anyone could visit the grave and that Enoch could continue to cut wattles growing on the burial ground. The relationship between the two families grew when Anton took first Willie and then Luyanda on as apprentices.

These two men helped to build Starways. At the same time, an arrangement was made that for every brick or stone laid at Starways there would be a similar structure built at Mafika’s home and funding was awarded to the project from the National Department of Arts and Culture for the poverty alleviation project.

Yet again we discovered that in Hogsback, if you’re prepared to dig a little deeper, so much more is on the go than what appears on the surface.